'Finding Gobi': An ultramarathon runner, a stray dog and their miraculous friendship
By Hong Yaobin An unexpected encounter between a man and a stray dog in China blossomed into a friendship and became the subject of an international bestseller.

Leonard is a seasoned runner, and the proud dad of Gobi, a small border terrier mix he crossed paths with while taking part in a desert race in northwestern China. 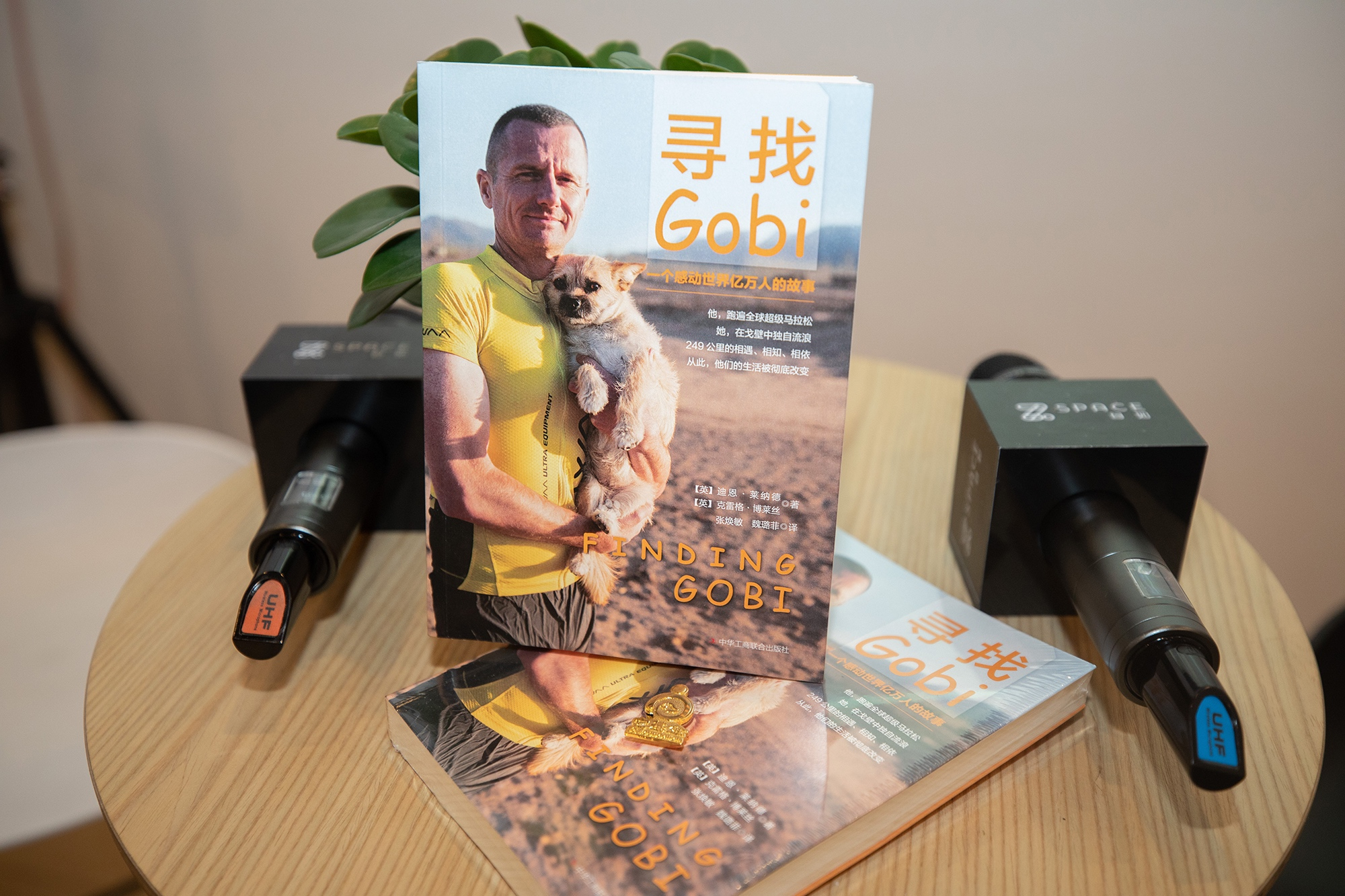 Their unlikely bond and the arduous journey to take the pup home to the UK culminated in a book, "Finding Gobi," the Chinese version of which recently hit bookstores across China.

The Australian-British ultramarathon runner has competed in some of the most grueling races in extreme conditions around the world, pushing the limits of his physical strength in events ranging from 50 kilometers to over 320 kilometers.

But one competition in China in 2016 changed the course of his life.

'A small dog with a very big heart' 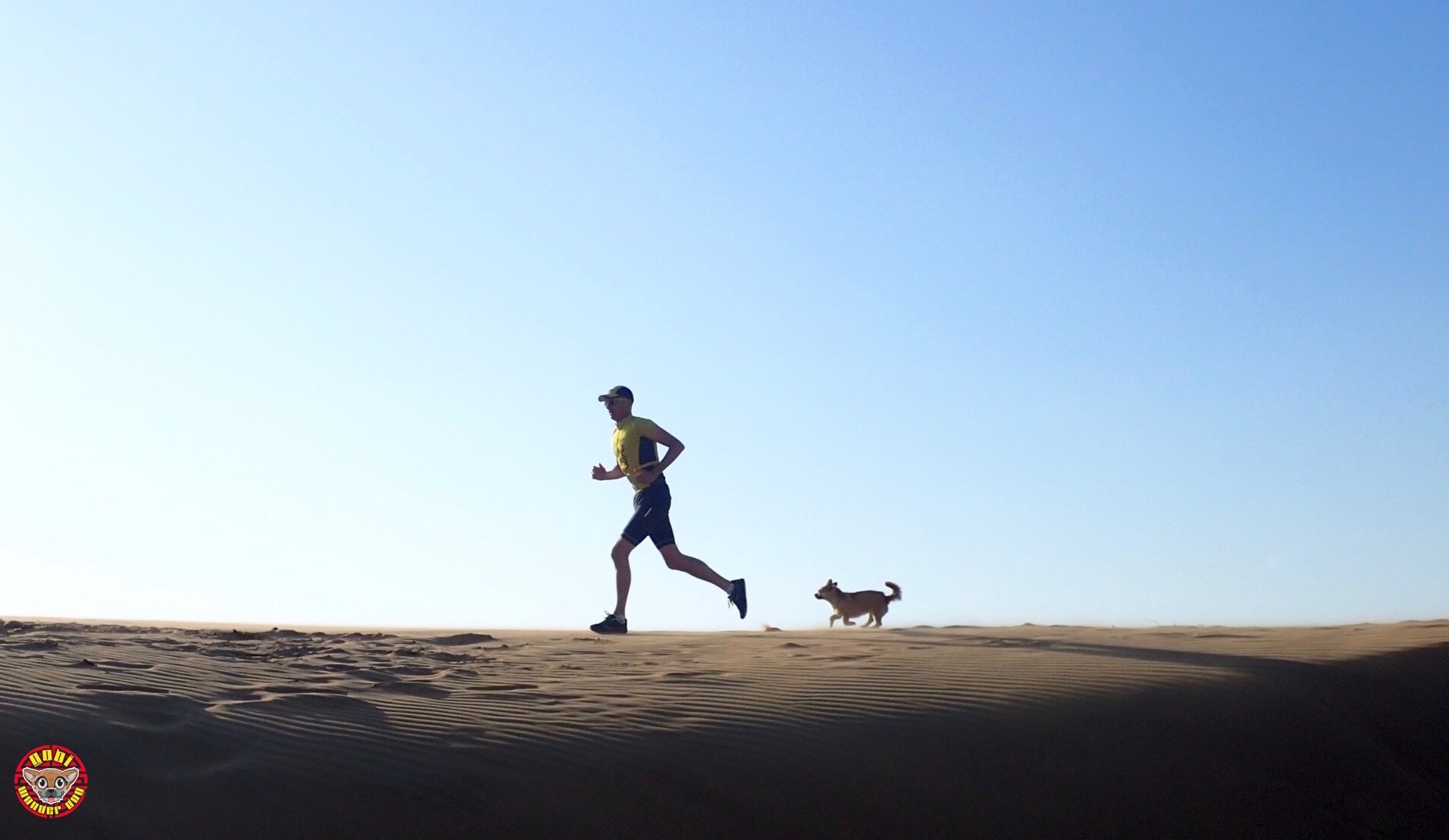 Leonard was running a six-stage seven-day race across the Gobi Desert in the Xinjiang Uygur Autonomous Region, when he realized an unusual competitor was on his tail.

On the second day of the race, "this little stray dog came out of nowhere and started to run with me," he said.

They ran together the whole day for nearly 40 kilometers, crossing Tianshan Mountains in scorching heat. In the following days, the puppy kept the runner company. 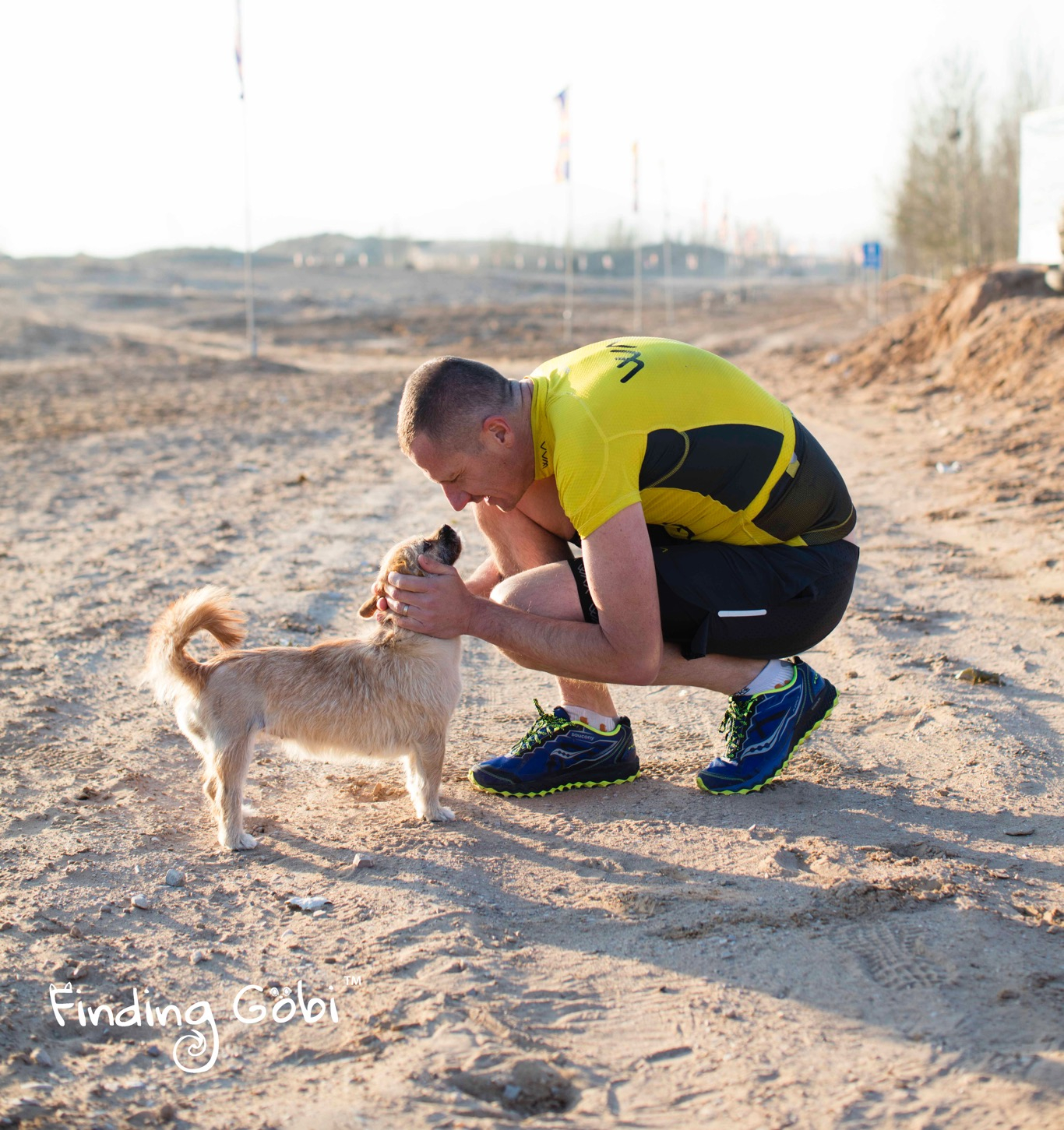 Leonard thought she would drop back, but much to his surprise, his new furry friend was not interested in calling it quits, eventually crossing 125 kilometers by his side.

"To see this little dog run all of the distance alongside me really made me smile and made me think what incredible determination she had to want to finish the race with me," Leonard said.

A story of help and hope 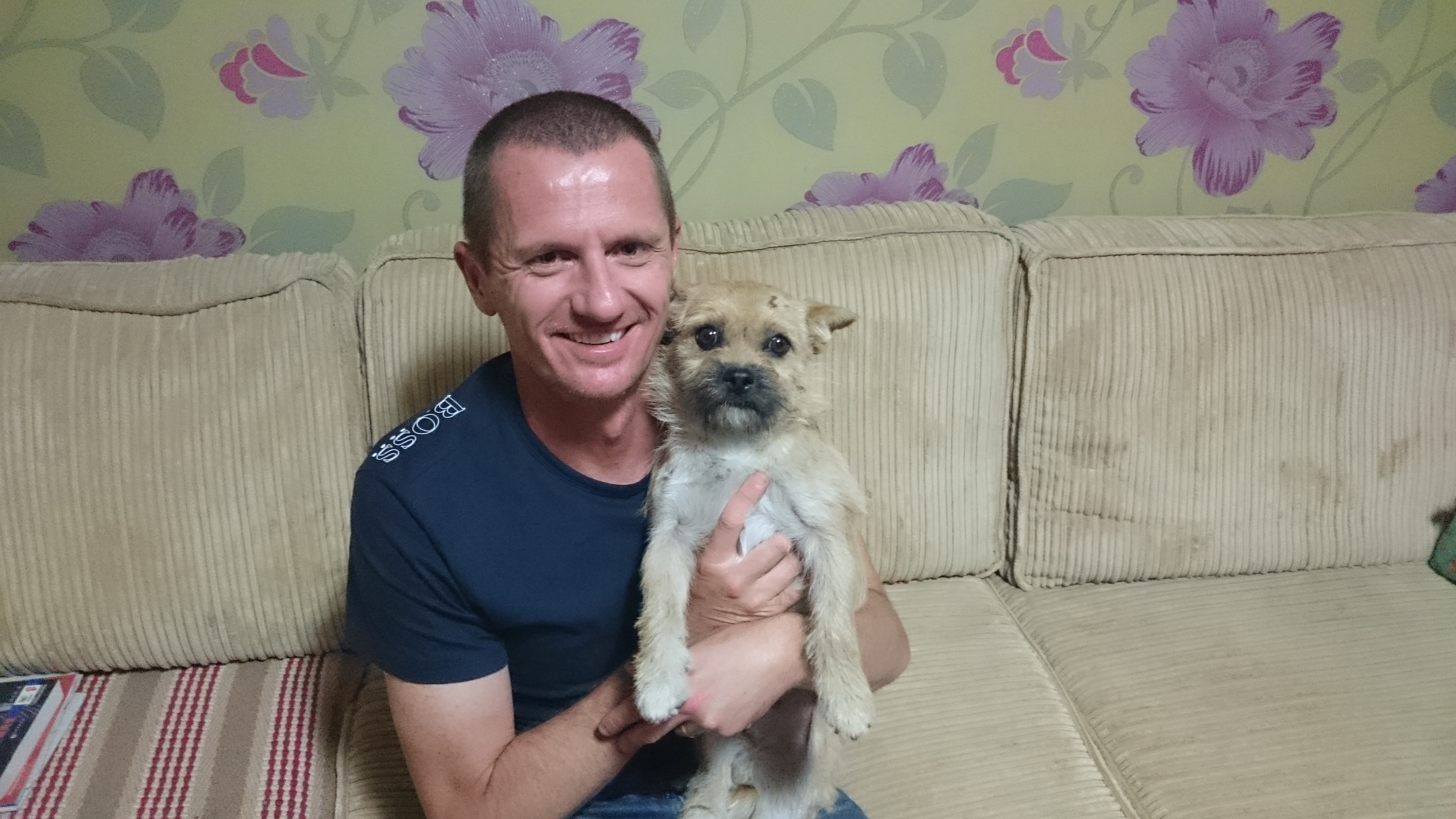 Dion Leonard reunites with his lovable pup at a local family's home in Xinjiang, China. /Courtesy of Dion Leonard

Dion Leonard reunites with his lovable pup at a local family's home in Xinjiang, China. /Courtesy of Dion Leonard

But while the decision to adopt Gobi was "an easy (one) to make," seeing it through was no walk in the park.

As Leonard prepared for the dog's new life in Edinburgh, where he was based at the time, bad news surfaced: Gobi had gone missing in Urumqi, the regional capital of Xinjiang.

"I was devastated. I was heartbroken that the promise that I'd made to Gobi was broken," Leonard recalled.

Dion Leonard and Gobi are pictured at Urumqi Airport. /Courtesy of Dion Leonard

Dion Leonard and Gobi are pictured at Urumqi Airport. /Courtesy of Dion Leonard

And he immediately decided to fly back to Beijing, and from there to Urumqi to search for the dog.

He set up a search team, which started with one volunteer. As news of his story traveled the width and breadth of China and beyond, more people offered help.

"All these wonderful people came to search for a dog that they've never seen before, and for a man whom they didn't know, it was incredible," he said, "and it kept inspiring me to keep searching for her."

After "incredibly difficult research" for nearly 10 days, they received good news. Gobi had been found at a house in Urumqi. 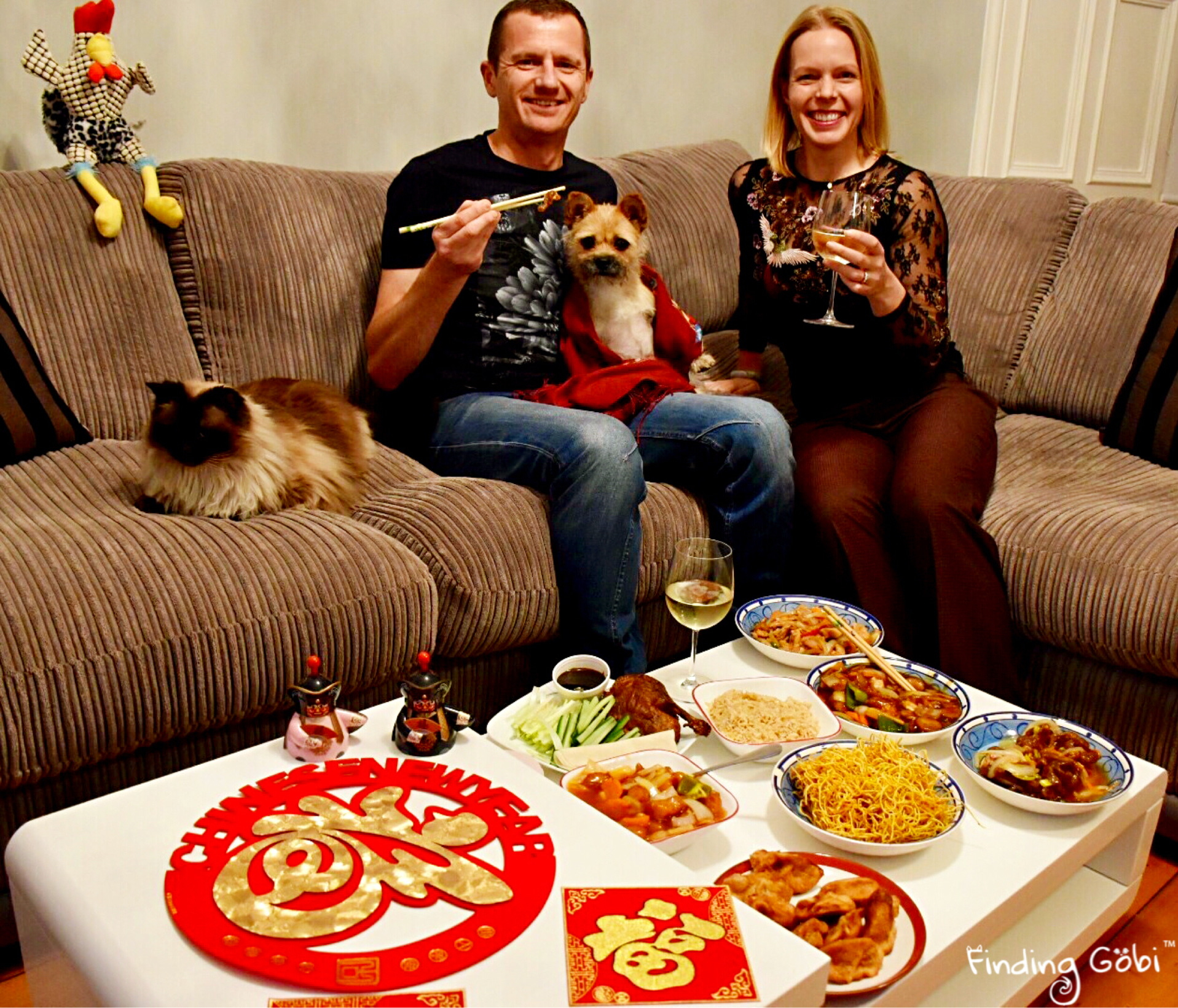 Leonard rushed to the location, saw his dog and happily confirmed that "she was alive, and that she was back into my arms again."

After six months, Leonard returned to Edinburgh to start a new life with his new furry friend Gobi.

'This is where it all happened' 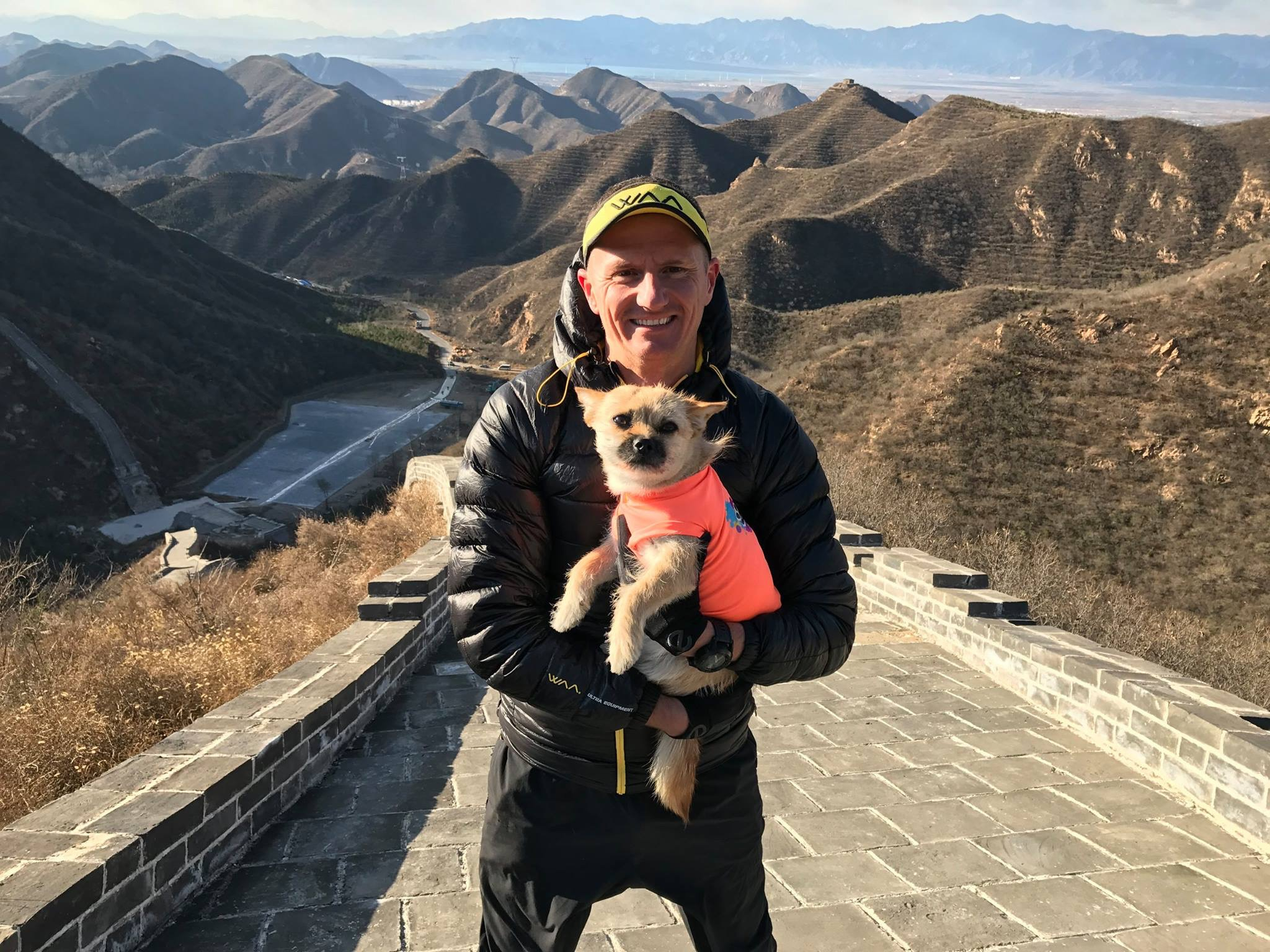 Dion Leonard and Gobi at the Great Wall of China. /Photo courtesy of Dion Leonard

Dion Leonard and Gobi at the Great Wall of China. /Photo courtesy of Dion Leonard

The long journey, with its ups, downs and twists, became an online sensation, and made international headlines, triggering an outpouring of love and support.

In 2017, Leonard published "Finding Gobi," which soon made its way to several bestseller lists in the U.S., Canada, and the UK – including the New York Times and the London Sunday Times lists.

The book was translated into French, Korean, Italian and Spanish, to name a few languages. The Chinese edition, which came out earlier this month, is the 17th language in which the book has been published. 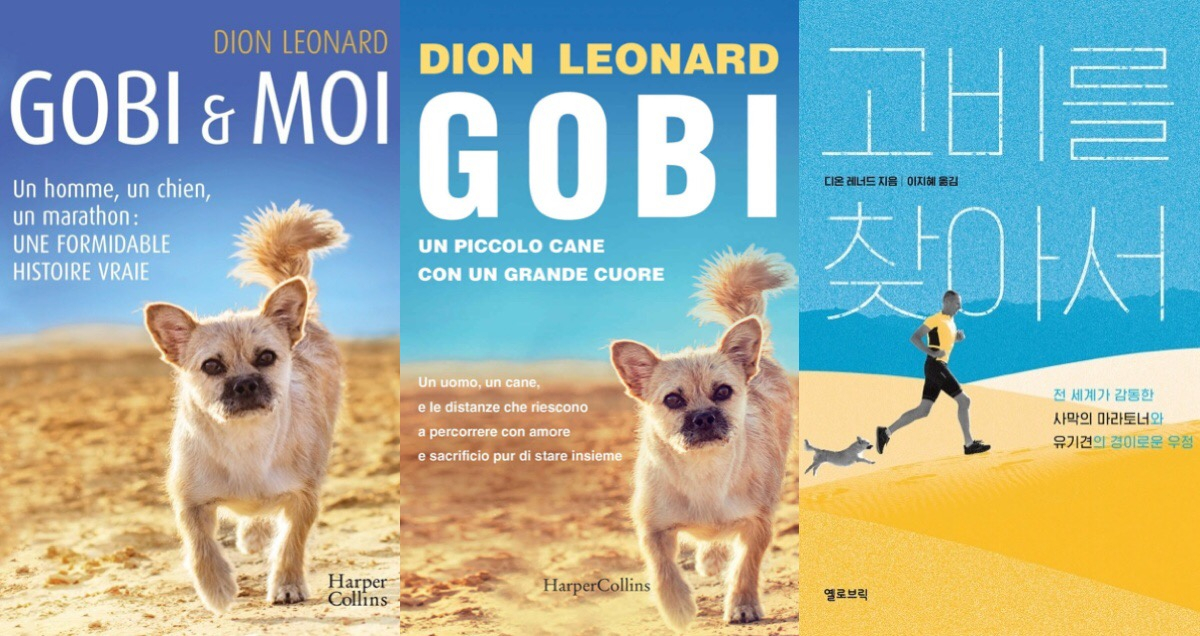 Book covers of the different language versions of "Finding Gobi" /Photos via Findinggobi.com

Book covers of the different language versions of "Finding Gobi" /Photos via Findinggobi.com

"It's amazing to think that we've now got 17 languages with the Chinese edition out." The first-time author said it was "one of the best experiences" to be able to go back to China with his book as "this is where the story happened."

Leonard said the experience has completely changed his views about China. "So many people were so generous to help and support us that I could see the love and kindness of the Chinese."

He expressed gratitude to the residents of Urumqi. "It was unbelievable because we were out there putting up reward posters in shop windows. And taxi drivers had them, the people that delivered parcels, they were giving them out as well. So the posters were across the city." 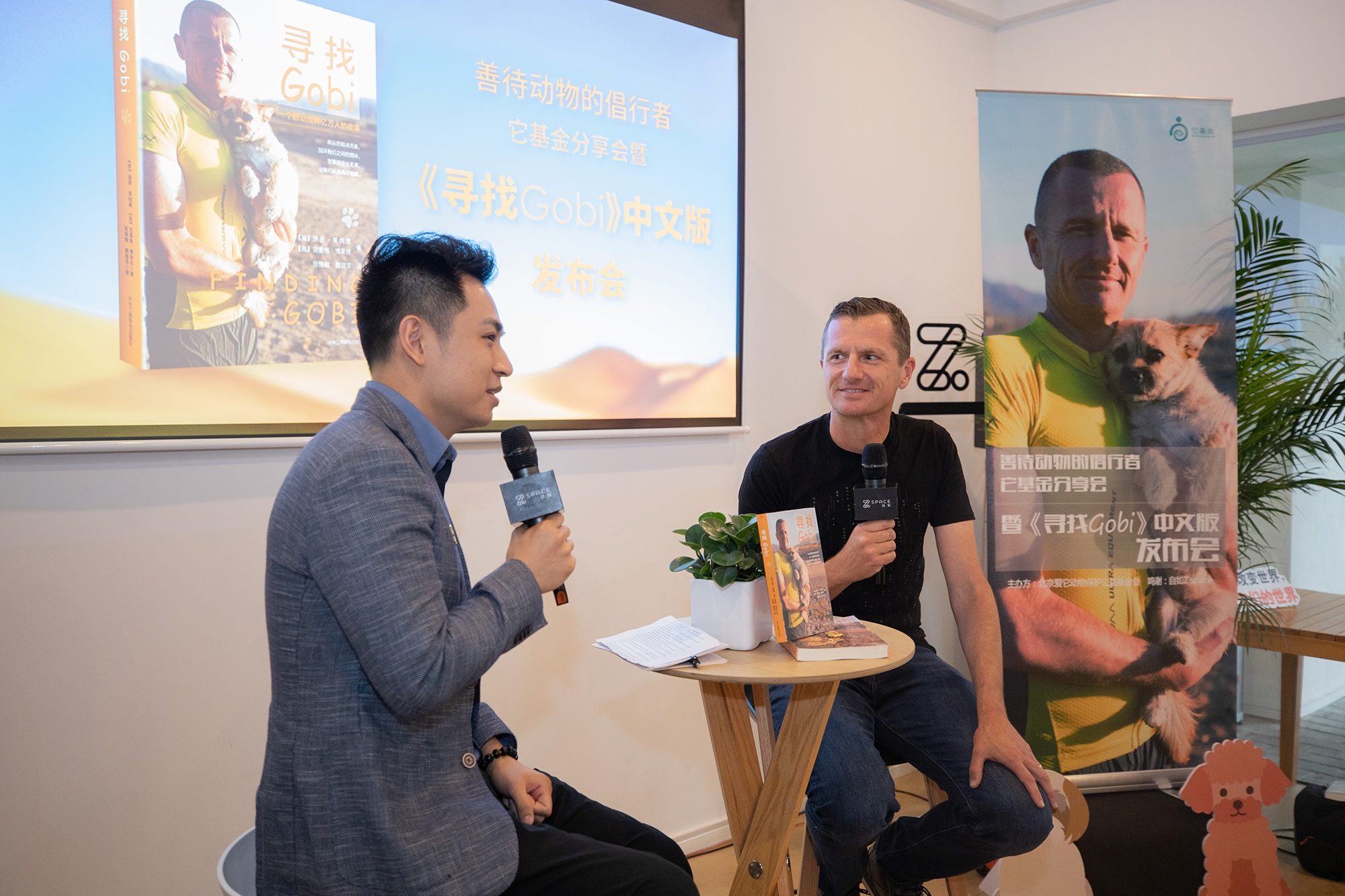 Dion Leonard (R) shares his and Gobi's story at his book launch held in Beijing. /Courtesy of Ta Foundation

Dion Leonard (R) shares his and Gobi's story at his book launch held in Beijing. /Courtesy of Ta Foundation

Some of Leonard's friends, whom he met in China and played a pivotal role in searching for Gobi, were invited to share their experience at last week's book launch held by Ta Foundation – the first charity dedicated to animal protection on the Chinese mainland.

According to co-founder Zhang Yue, they wanted to raise public awareness about being kind to and helping rescue stray animals. She noted that "the amazing story of Dion and Gobi shows us how an equal and intimate relationship can be formed between men and animals."

"So many more people helped make the story happen that we wanted to share that with everyone and share Gobi's story. We're also helping other animals in need," Leonard said.

He hoped those who read the story could go and help other dogs, "just like I helped Gobi."

'Why did you choose me?'

Leonard and Gobi's story proved once again that dogs really are "man's best friend." Currently, Gobi is living with Leonard and his wife in France.

"We live in the mountains. We live in Mont Blanc, which is Europe's highest mountain, and she loves the snow. She goes crazy in the snow and she loves running in the summer and running into the rivers," Leonard said, smiling.

"I know that she loves running. That dog is born to run."

He admitted that the pup changed his life in many ways, saying that "sharing those experiences with Gobi every day makes my heart grow and puts a smile on my face." 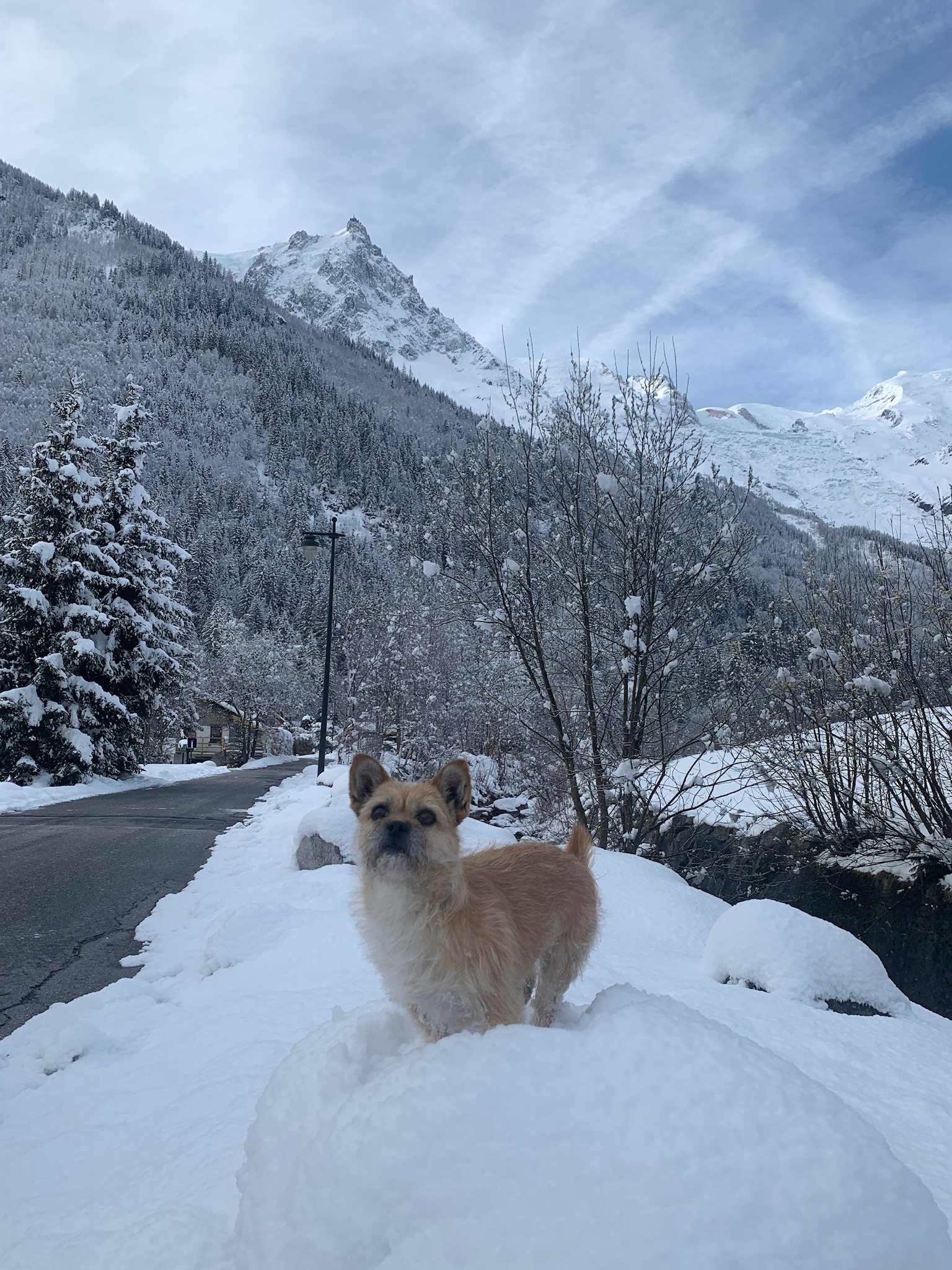 "Since moving to France, Gobi has now found a love for pastry," the runner quipped, sharing his "new concern." "She loves cake and I need to keep her running now because she needs to lose some weight from eating great French food."

He revealed that "at the moment they have a director, they have some producers involved. And we've got some really big names actually circulating around who's gonna play the role of me as well."

Talking about his future racing plans, Leonard said an intense schedule of race competitions awaits him next year, but Gobi will not be joining in the fun. 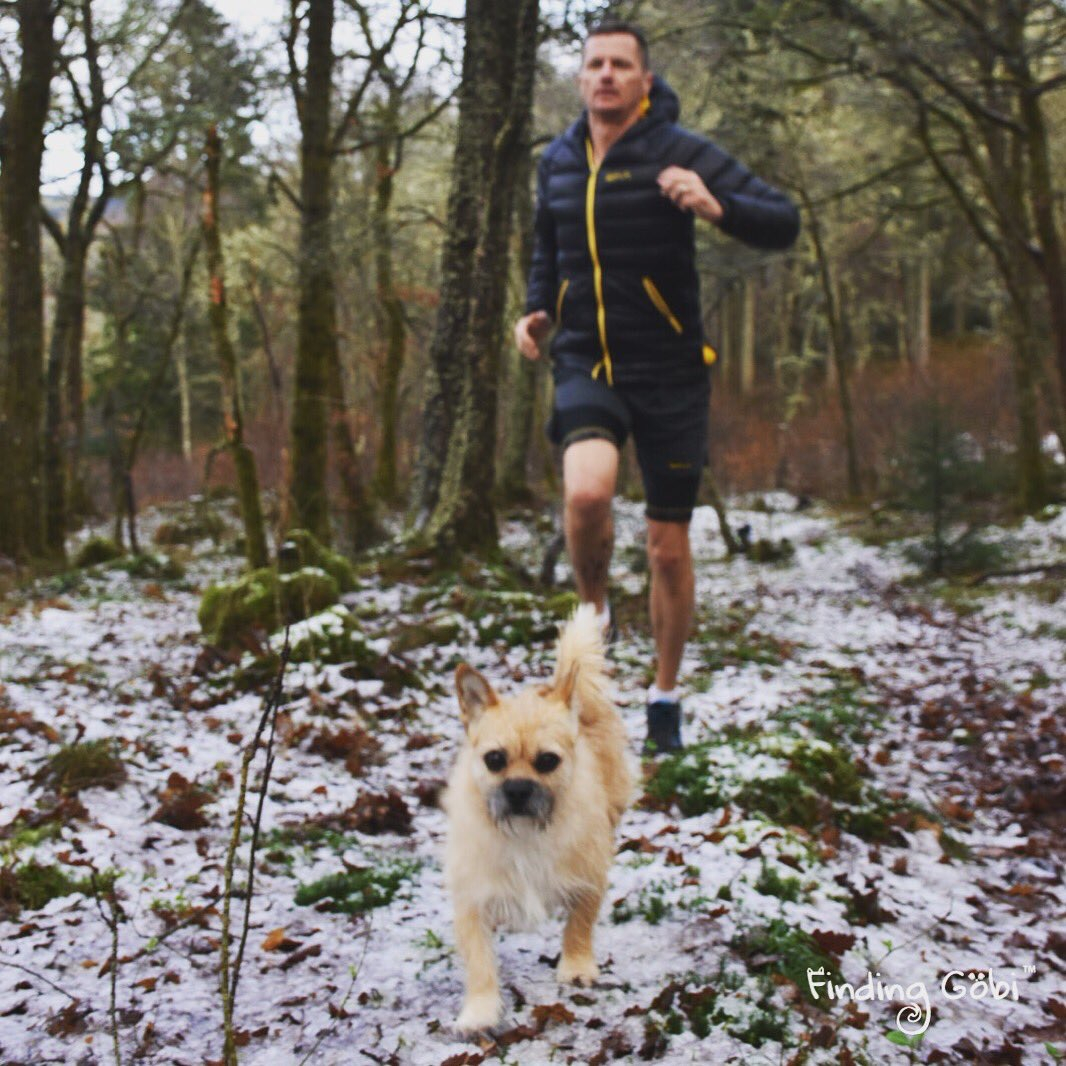 Gobi still runs with Leonard every day but will not join extreme ultramarathon races anymore. /Courtesy of Dion Leonard

Gobi still runs with Leonard every day but will not join extreme ultramarathon races anymore. /Courtesy of Dion Leonard

"Gobi is kind of officially retired from running a lot of the races," said the runner, noting, "I do long distance races, so they're normally around a hundred miles or longer in one go. So it's way too much for a little dog to run."

"It's important to make sure that she just lives a happy, healthy, long life," he stressed.

When asked what he would say if his puppy friend could understand his words, Leonard said "I'd probably ask her, 'Why me? Why did you choose me?' It'll be interesting to know things from Gobi's side. Where she came from, where she was living, what she was doing out in the desert and why she chose me.

"The answers, we will never know."