Singapore's Net Zero Energy Building: A roadmap for the future?
By Aliyah Sahni 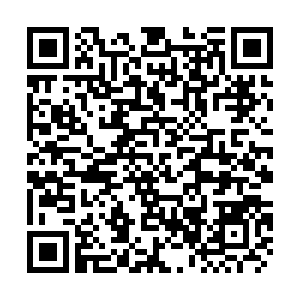 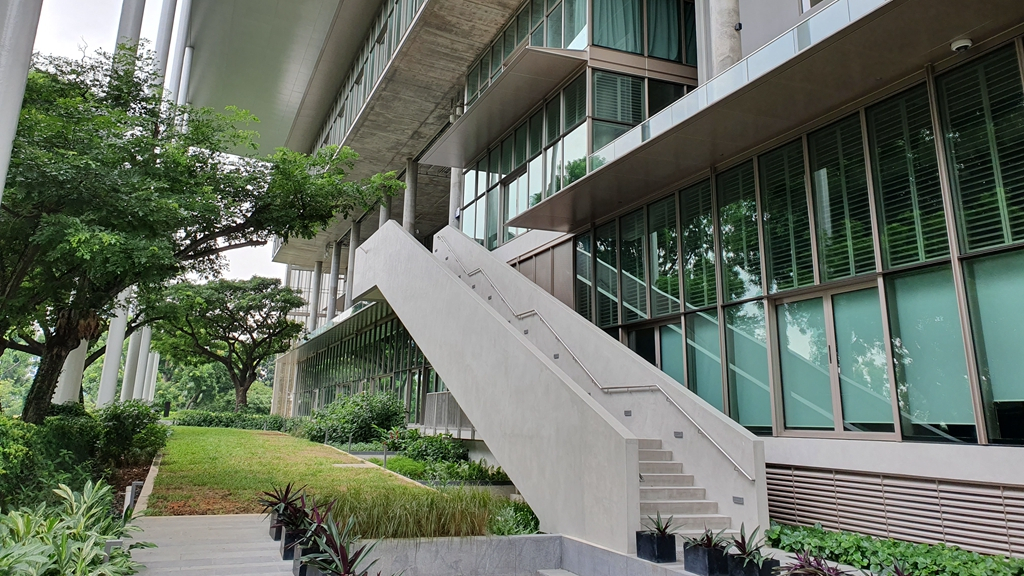 Sitting atop a hill, National University of Singapore’s (NUS) School of Design and Environment (SDE) building, the SDE4, certainly stands out.

At first glance, you might notice its high roof, open spaces and glass boxes placed loosely on top of one another. It is these characteristics that make this structure unique.

SDE4 is NUS's foremost net-zero building, and the first of its kind in Singapore to be built from scratch.

Being net-zero primarily means that the total amount of energy used by the building in a year is equal to, or less than the amount of energy generated on site. SDE4 gets its power through a "solar farm" on its roof which comprises over 1,200 solar photovoltaic panels.

Covering an area of 8,588 square meters, the complex is not only energy efficient and environment-friendly, but also boasts a range of innovative building strategies that focus on improving the well-being of its users. 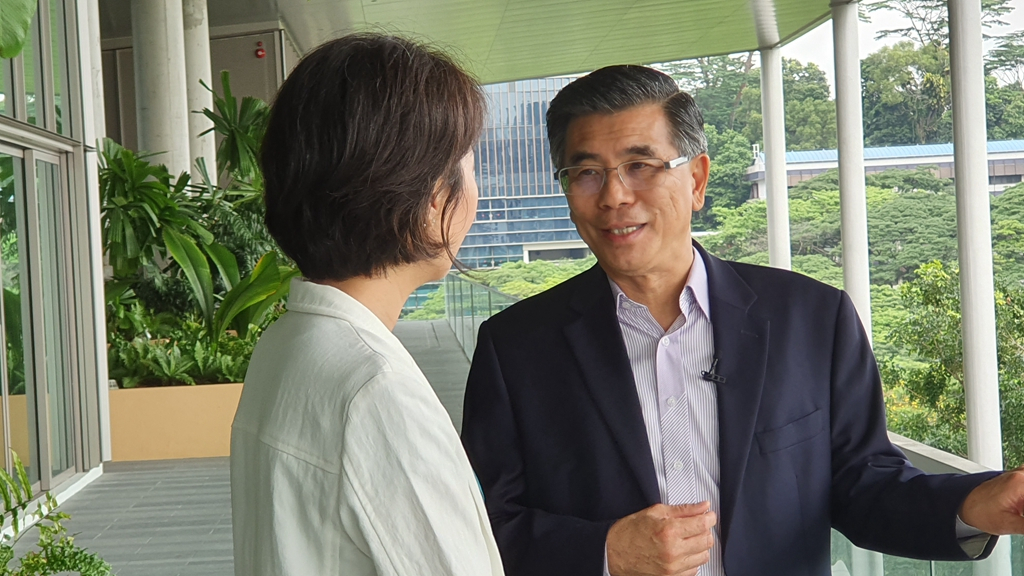 Professor Lam Khee Poh of the NUS School of Design & Environment talking about the design elements of SDE4. /CGTN Photo

Professor Lam Khee Poh of the NUS School of Design & Environment talking about the design elements of SDE4. /CGTN Photo

CGTN took a tour of the facility with the dean of the School of Design and Environment, Professor Lam Khee Poh, who explained why it was crucial for the school to be the one to spearhead the project.

"We need to walk the talk. If we do not practice what we preach, how can we convince the students? They don't just need to study the theory but also understand how the practice is, and now they are convinced that yes, it can be done."

Christopher Lee, from Serie Architects, told CGTN that working on a net-zero energy building, especially in the tropical climate of Singapore was a monumental challenge. The team concluded that the only way to make the building net-zero would be to considerably reduce its energy consumption.

"We immediately started off by looking at pre-air conditioning days because conventional air conditioning (units) are actually energy guzzlers. What we looked at was traditional Malay houses." 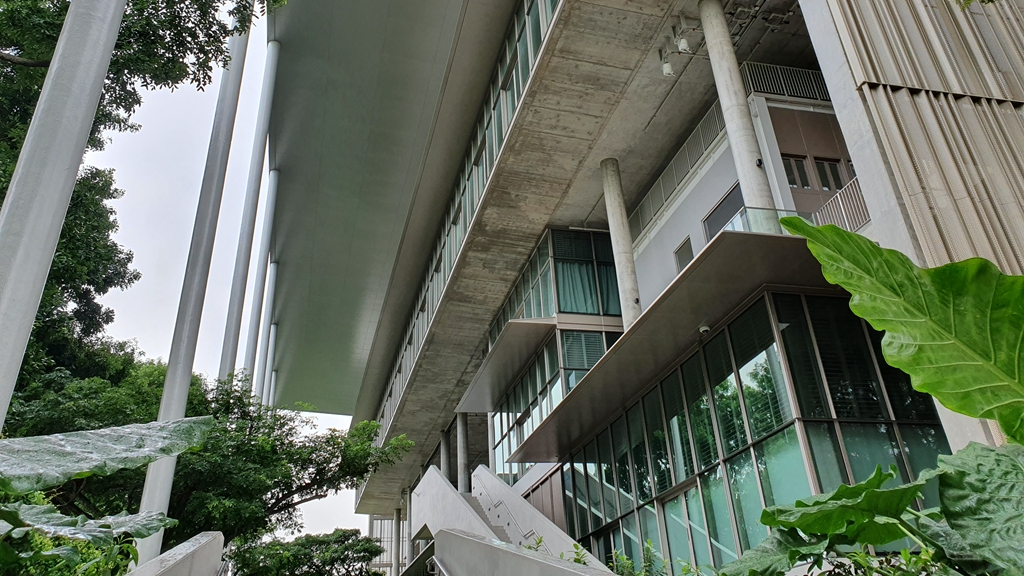 The large roof helps provide shade and reduces the impact of direct sunlight on the building. /CGTN Photo

The large roof helps provide shade and reduces the impact of direct sunlight on the building. /CGTN Photo

The project drew several lessons from this type of architecture.

"First is that it uses a very large roof to shield the spaces from the searing heat. Second is the careful arrangement and loose arrangement of rooms so air is allowed to pass through these rooms. Third is to raise the building above ground, volumes are placed apart so that air and natural ventilation cool the building naturally," said Lee.

The SDE4 building makes use of the architectural concept of "floating boxes", which allows for cross-ventilation. Lam said there was a need to “provide as much opportunity for natural ventilation of spaces as possible.”

"Singapore has very hot weather and the sun is always up on top," he noted. "We need to shade not only in the sort of roof plane but also in the east and west facade because that's where the sun's path is."

Curtain-like perforated screens were thus placed on the sides of the building, allowing natural light to come in, while stopping harsh solar rays from heating up the building.

"The use of what we call the buffer space on the east and west facade, together with the screen, cuts off direct heat gain and also creates a space that we call an environmental buffer. A space that is in between two temperatures," Lee explained.

SDE4 also boasts what has been described as a "hybrid cooling system."

"In any building, there will be places that you need to air condition because of their function, but there are spaces where you don't really need air conditioning, like social spaces," Lam explained.

"We brought the use of fans back and we combined this with air conditioning. We immediately reduced the energy used because we don't need to cool the air to 22 or 24 degrees: we typically set our temperature to about 27 degrees Celsius," he noted. "By setting it higher, you save energy. But it does not compromise comfort because the fan is moving the air."

Based on the design elements used in SDE4, the School of Design and Environment is now renovating two of its older buildings, using the same hybrid cooling system to bring down the temperature inside the buildings and reduce their energy consumption.

Another area that the team at SDE4 focused on was the well-being of its occupants.

Typically, air-conditioned buildings tend to overcool and recycle up to 90 percent of their air. SDE4 has completely changed that system, constantly providing fresh air inside the building, while a team keeps tabs on CO2 levels to make sure the air quality is maintained. 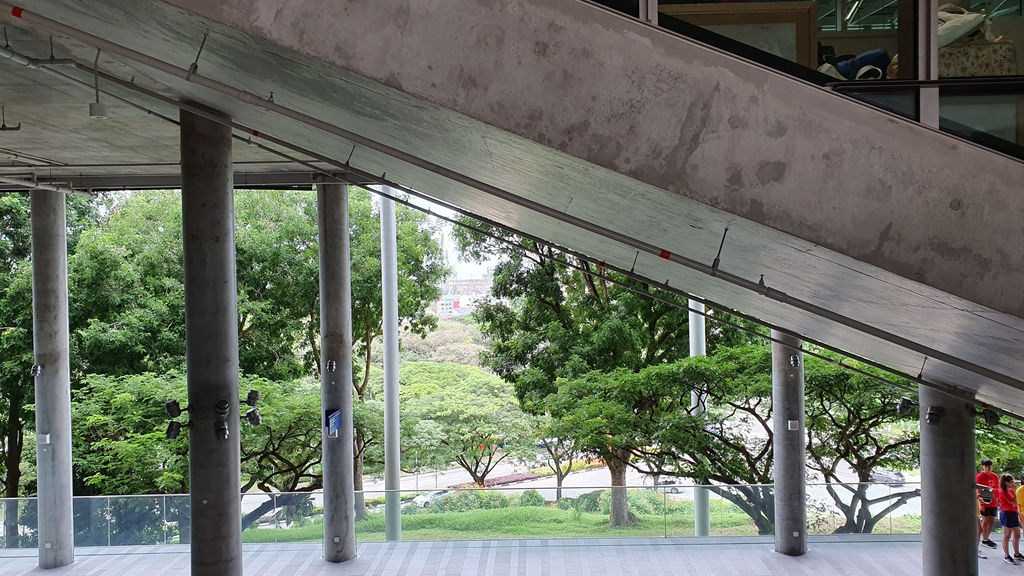 Raised "social plaza" opens up to trees and greenery to improve the "wellness" of the occupants. /CGTN Photo

Raised "social plaza" opens up to trees and greenery to improve the "wellness" of the occupants. /CGTN Photo

Surrounding trees "also play a critical and psychological function," with all studios looking out onto them, noted Lee.

SDE4 has already been awarded Singapore's Green Mark Platinum certification, and the School of Design and Environment has applied for certification by the International WELL Building Institute, which recognizes best practices in design and construction that focuses on the health and well-being of its users.

For Lee, the building is "a learning space" and "a pedagogical tool." The School is using the building "to demonstrate that they can use architecture, international strategies and design to confront the crisis of climate change."