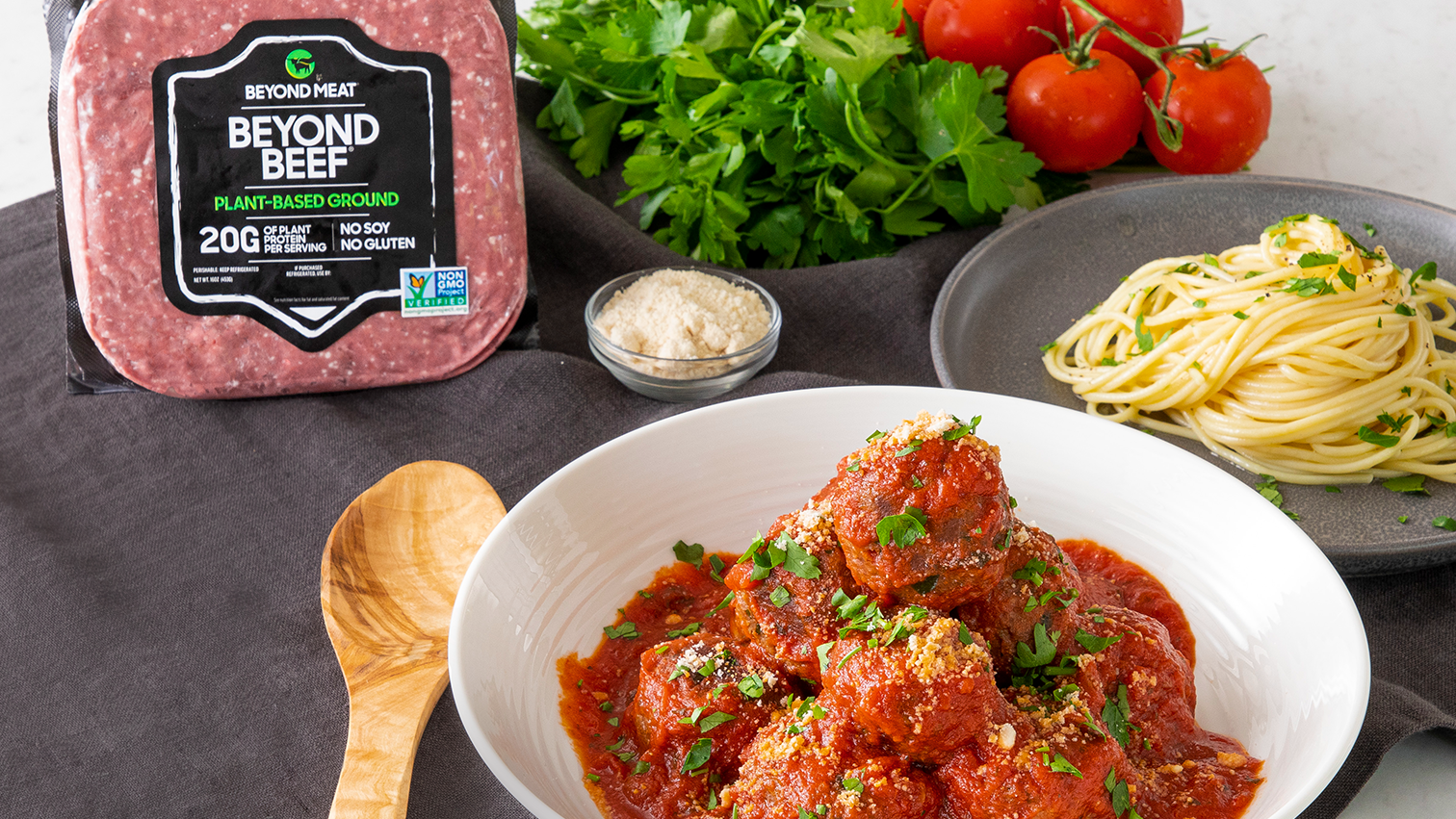 Beyond Meat's Beyond Beef behaves like minced beef, and can be shaped into balls for spaghetti. /Photo via Beyond Meat

Beyond Meat's Beyond Beef behaves like minced beef, and can be shaped into balls for spaghetti. /Photo via Beyond Meat

When it comes to fake meat, Beyond Meat has a history of thinking outside the box. But in its latest endeavor, the agritech startup didn't just take the box and shred it — it chucked it in a meat grinder.

The result is a plant-based substitute to minced beef that looks, cooks, oozes and reportedly tastes like the real thing.

The Los Angeles-based company, whose "bleeding" veggie burger helped bring mock meat to the mainstream in the U.S., announced on Wednesday its newest offering: Beyond Beef.

The meat-free ground will hit the shelves of select stores in the U.S. in a few days before a nationwide roll-out in the coming weeks, including in Amazon Inc.'s Whole Foods, Safeway and Wegmans.

The new product seems like the child of necessity and expectation.

Beyond Meat and its rival Impossible Foods have enjoyed first-mover advantage in the alternative meat race, but competition is heating up and skeptics are betting that their sizzling performance is just a fad with a short shelf life.

Sharks of the food industry, such as Nestle and meat producer Tyson Foods, are testing the waters with their own takes on faux meat, looking to sink their teeth into the juicy animal-free meat sector, which Barclays analysts estimate could swell to 140 billion U.S. dollars over the next decade.

Read more: Vegan unicorn Beyond Meat to aim for $1.2 bln valuation in IPO

Beyond Meat is on a drive to stay at the top of the pecking order, diversifying its product profile to appeal to a growing number of consumers — mostly meat eaters — hungry to cut back on their carbon footprint without compromising their culinary preferences.

The new Beyond Beef is the company's latest addition to its smorgasbord of cruelty-free treats including burgers and sausages, and comes hot on the heels of Beyond Meat's launch earlier this month of the 2.0 version of its flagship Beyond Burger, which is meatier and juicier than its predecessor.

The same recipe of the reformulated plant-based pucks seems to be the base of Beyond Beef, which the company says closely mimics the marbled texture and succulent taste of traditional minced beef.

A four-ounce serving of Beyond Beef packs 20 grams of protein — the same portion of minced beef has between 16 to 28 grams depending on lean-to-fat ratio of the grind — thanks to a mixture of pea, mung bean and rice. The last two ingredients are a new addition to Beyond Meat's formula and are said to give the product its fibrous texture and serious protein punch.

Marbling is another feature of the plant-based ground, imitating the white flecks of fat in beef mince but offering 25 percent less saturated fat. It allows the meat alternative to tenderize and release juices during cooking.

"This plant-based ground meat allows consumers to enjoy all the culinary versatility of ground beef, with the added nutritional and environmental benefits of eating plant-based meat," said Beyond Meat Founder and CEO Ethan Brown in a statement.

And while the jury is still out on how close in taste and mouthfeel Beyond Beef is to its animal-based counterpart, investors seem to be salivating over the company's announcement, which buoyed Beyond Meat shares.

Beyond Meat is by far the top-performing IPO of the year, heightening a nascent buzz around plant proteins in the U.S. and across the pond amid increased awareness about the detrimental environmental effects of traditional animal farming and mass adoption of health-conscious lifestyles.

Beyond a doubt, Beyond Meat and its ilk have brought replicas of conventional meat to fast-food chains and the frozen meat sections in supermarkets, marketing them to a new breed of consumers that don't necessarily identify as vegetarians or vegans. But imitation meat was a thing in Asia way before its current hype, with deep roots in culinary traditions in countries like China and Indonesia.

Fake meat in China can be traced back to the Tang Dynasty (618-907) when an official treated his guests to a banquet of mock pork and mutton, according to cook and Chinese food expert Fuchsia Dunlop, with Buddhist monks and low-income households letting their imagination run wild in the kitchen for the next best clone of meat.