Greece snap election: Who will have the last laugh?
By Shi Yu 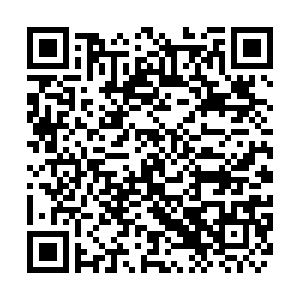 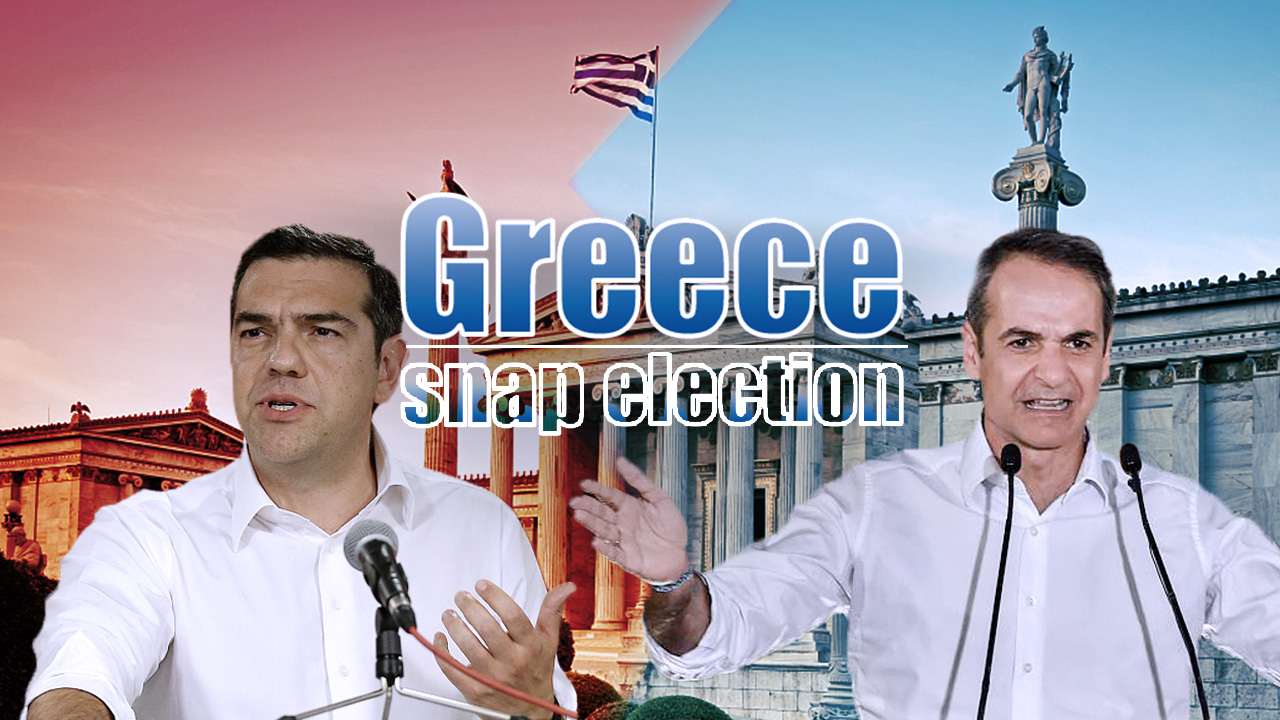 A total of 20 parties and coalitions will participate in the elections, but there will be only one winner. Ahead of the election, here's all you need to know.

What leads to the snap election?

The crushing defeat of the ruling party in the EU polls is one of the reasons. Mitsotakis, the conservative ND's leader who pledged "to unite all Greeks and lead a great political change" cast the election as a referendum on his rival's four-year term in office.

He immediately pressured Tsipras to resign after the poll was released. "It was obvious that the Greek people have withdrawn their confidence in this government," said Mitsotakis, adding that the prime minister "must resign and the country should hold national elections as soon as possible."

The victory of the ND is not a surprise since all surveys showed that the 51-year-old opposition leader was given the edge before the announcement of official results. Analysts believe that the trend indicates an atmosphere of growing polarization in Greek society.

Facing the intensified inter-party competition and the crushing defeat in EU elections, Tsipras was forced to call a snap election in attempt to "limit the damage for Syriza," said Bloomberg's Eleni Chrepa. Apart from defeat in the EU elections, the approval of the North Macedonia name deal is the second leading reason. The deal, ratified by the parliament in late January, allowed Greece's neighboring country to rename itself as "Republic of North Macedonia" to differentiate it from Greece's northern province of Macedonia.

The deal which aims to end a decades-old dispute caused political turbulence in Greece after Defense Minister Panos Kammenos, also the leader of the coalition government's junior party, resigned over the Macedonia name deal together with his right-wing Independent Greeks (ANEL) party quitting the government.

Moreover, the deal also evoked strong emotions among Greeks who considered Macedonia, the ancient kingdom ruled by Alexander the Great, to be an integral part of their homeland and heritage. Tens of thousands of Greeks rallied in Athens to protest against the deal, making it one of the biggest demonstrations in Athens.

Even though Tsipras called an "immediate" no-confidence vote and won a narrow victory, he lost the simple majority in the parliament as his group only has 145 MPs. The move resulted in a four-percent drop in the opinion poll, though it recovered gradually in the following three months. Experts suggested that the unrest would harm Greece's efforts to restore growth following Greece exiting the bailout period last summer after eight years. 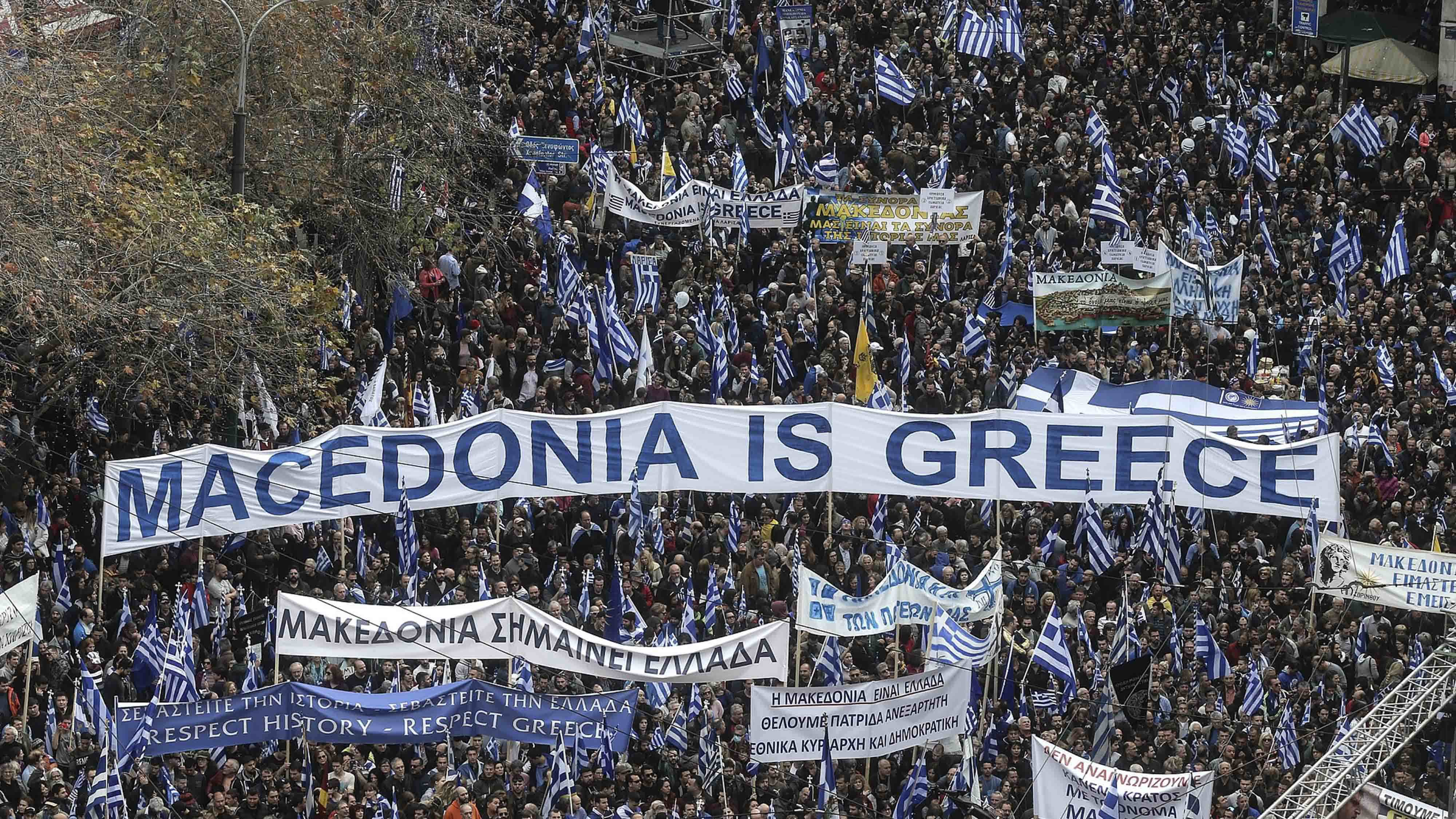 People take to the streets to urge the government not to compromise in the festering name row with neighboring Macedonia, Athens, February 4, 2018. /VCG Photo

People take to the streets to urge the government not to compromise in the festering name row with neighboring Macedonia, Athens, February 4, 2018. /VCG Photo

Elections in Greece are compulsory for people above 17 years old. In the 2019 elections, 250 seats will be distributed on the basis of proportional representation in the constituencies, with a threshold of 3% of those who voted required for entry into parliament.

Fifty additional seats will be awarded to the party that wins a plurality of votes. Coalitions are not counted as an overall party. According to the election law, party or coalition of parties needs to gain a majority (151 out of 300) in the parliament in order to win the election.

Major players and their policies

The infographic below shows the top five political parties in the opinion polling, but experts believe that the upcoming election would mainly be a battle between the ruling Syriza party and the opposition New Democracy. 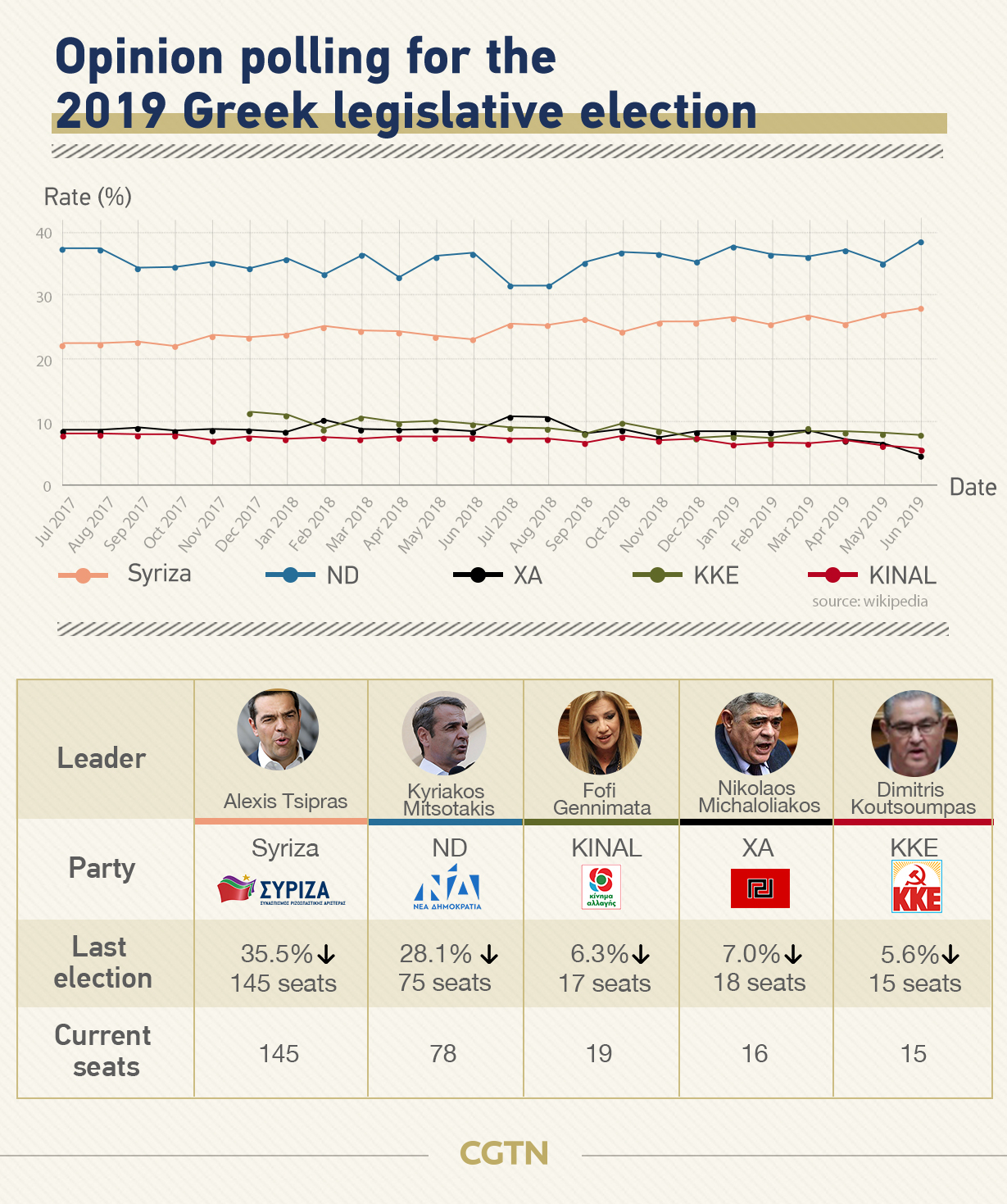 The situation is not optimistic for Syriza as opinion polls show that the ND has been leading the edge in the past two years with a nearly 10 percent lead held by the conservative party currently. The survey conducted by Skai TV also indicated that 70 percent of the interviewees said they believe ND will win the election, compared to 19 percent who believe Syriza will renew its mandate.

Earlier in June, Greek voters handed another victory to the opposition ND party by granting the party the seats of the mayor of Athens and the district governor for the wider Athens area in the local elections, another boost for the ND ahead of the snap election.

Among all the domestic issues, economic issues played a major role in the election given the eight-year depression caused a quarter decrease in Greece's economic output. Meanwhile, the unemployment rate peaked at 28 percent in 2013 and remains at 19 percent. Economists record it as the worst contraction of any developed economy since World War II. 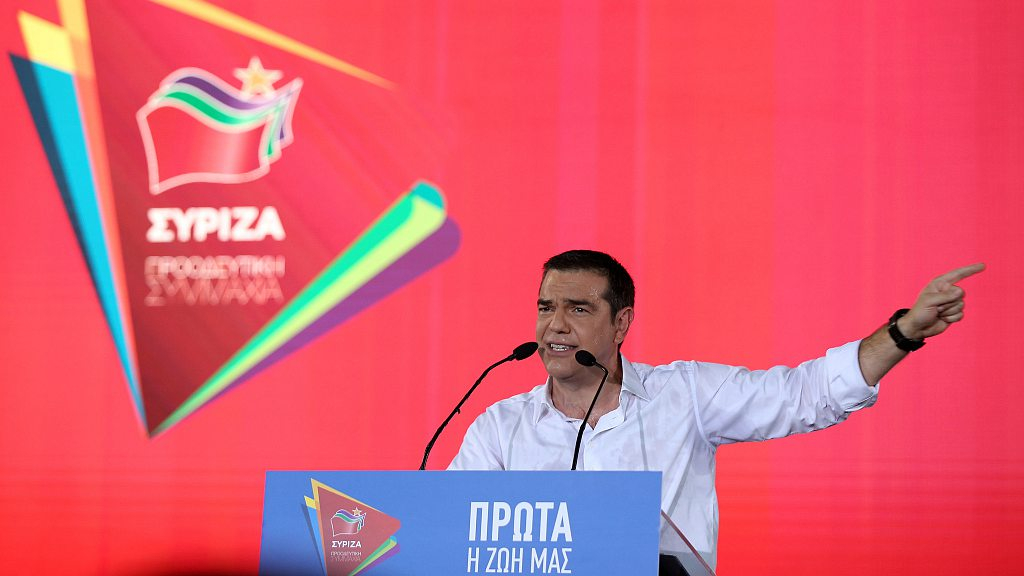 In his campaign, Tsipras warned that Greece is at risk of returning to the "darkness of austerity" if people vote for the ND. Tsipras credited his government for pulling the country out of the austerity by ending its third consecutive bailout program last August, under Tsipras' leadership.

He pledged to release a package of relief measures to cut taxes and increase pensions so as to "reward" the Greek people after years of austerity in the debt-laden country – similar to the proposal offered by ND's Mitsotakis which, in his words, is an "aggressive and comprehensive tax reform."

Regarding Mitsotakis' reform program, though no more details have been released yet, Eurasia analysts believe that the reform is expected to focus on growth-enhancing reforms that would be positive for markets and creditors alike, and to lower the tax burden on firms and households, improve business environment and hasten the restructuring of the banking system as well.

Despite ND's apparent advantage, experts suggest that it may be difficult for any party to secure an absolute majority in the 300-seat parliament. A coalition may be necessary in order to win the general election.