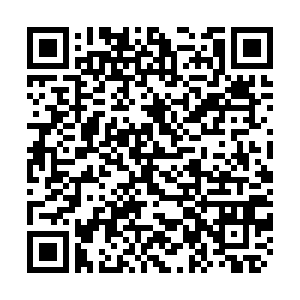 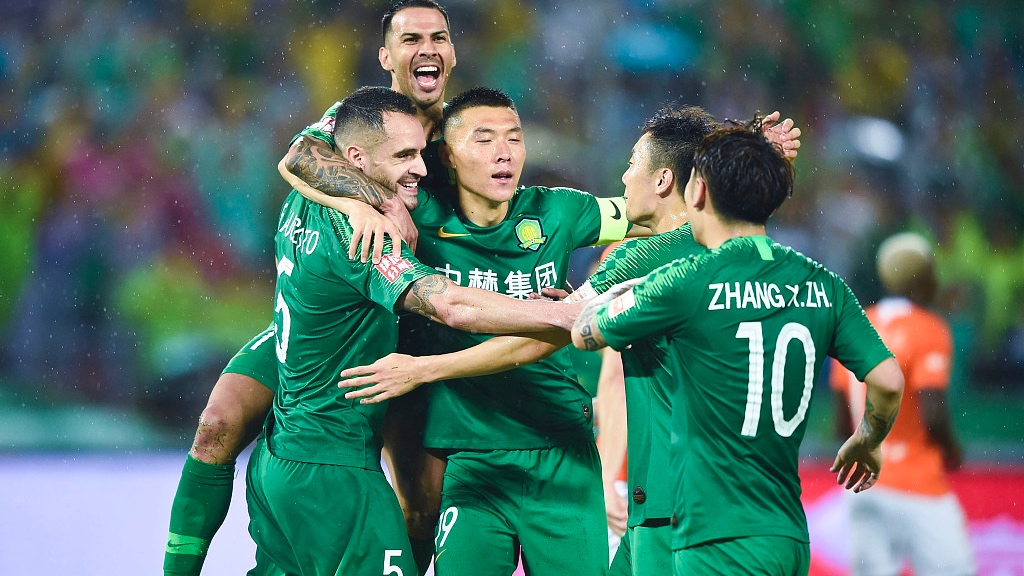 This may be the night that constituted the true beginning of Beijing Guoan's title charge.

At the end of the day, there was surely no Guoan supporter who could even recall the unease they had felt beforehand. The euphoria is all the more intense since the capital giants not only toyed with their arch-rivals and Chinese Super League new-boys Wuhan Zall in a coruscating 3-0 win but also vaulted over Guangzhou Evergrande to reclaim the top spot in the standings.

There had been a measure of vexation in Guoan's ranks when Evergrande came from behind to grind out their 3-1 victory at Tianjin Tianhai in the early kick-off. Roger Schmidt and his players had hoped that this would be the day when Evergrande slipped, but Fabio Cannavaro's side just refused to lie down in the face of adversity.

It was left to Guoan to do their job, to bounce back from a terribly disappointing 2-0 loss to Shandong Luneng last week and in a game that wasted no time in coming to the boil, they did precisely that. There was a febrile atmosphere on this reverberating Saturday night inside the Beijing Workers' Stadium led by a roisterous North Stand and Guoan immediately rose to the occasion. 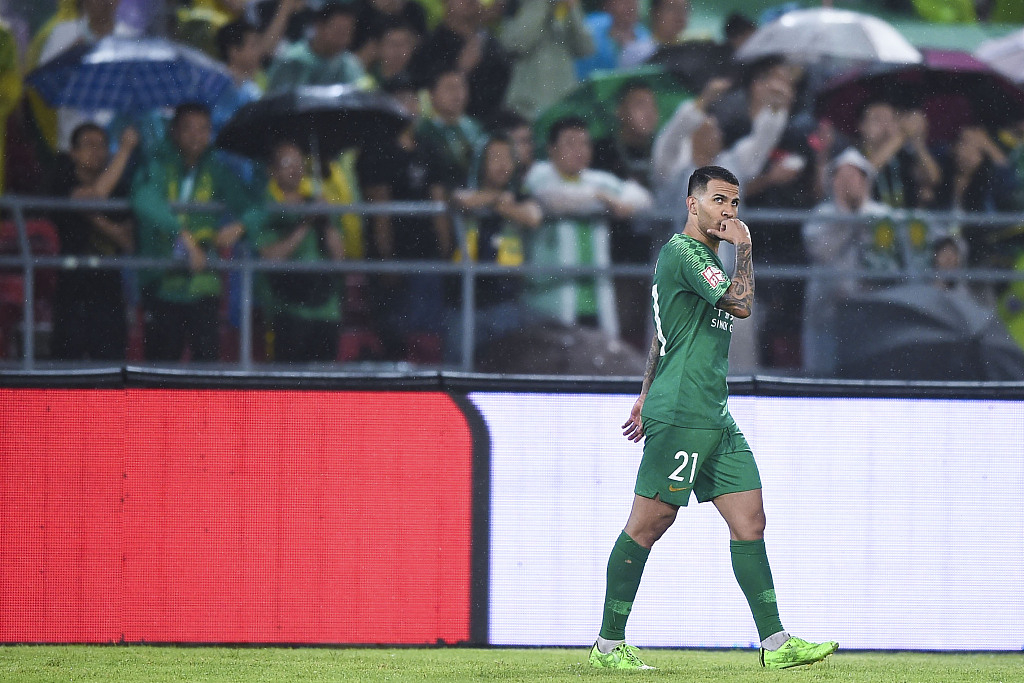 As early as the first minute, Renato Augusto accelerated into the area and connected with Zhang Xizhe's cushioned pass only to direct his volley wide. The contest may have looked as if it could be overcome by anxiety, but as the rain-soaked home crowd roared, clapped and whooped, Guoan behaved as if they would alleviate the tension by launching themselves into waves of stirring attacks.

It's no surprise that the hosts were ahead inside the opening quarter-hour when Jonathan Viera converted a cut-back from the lively Augusto to sweep past Zall keeper Dong Chunyu. Viera's ingenuity and mesmerizing movements make him a dangerously elusive player and minutes later the Spanish midfielder caused havoc again as his calmly placed through-ball put Zhang Xizhe in a one-on-one situation, but Dong produced a great save to deny the Wuhan-born star.

It could have been an even more chastening experience for Zall before the interval, but Wang Ziming thumped a header against the bar as Guoan's quality fullback Wang Gang was given too much space on the right flank and was regularly bisecting Zall's backline.

Li Tie's side had caused Guoan a fair degree of irritation when they met at the Wuhan Dongxihu Sports Centre Stadium on the opening day of the season, but Zall were unable to be competitive again here. Even when presented with chances, they seemed inexplicably unassertive or inhibited, to do anything productive with them. 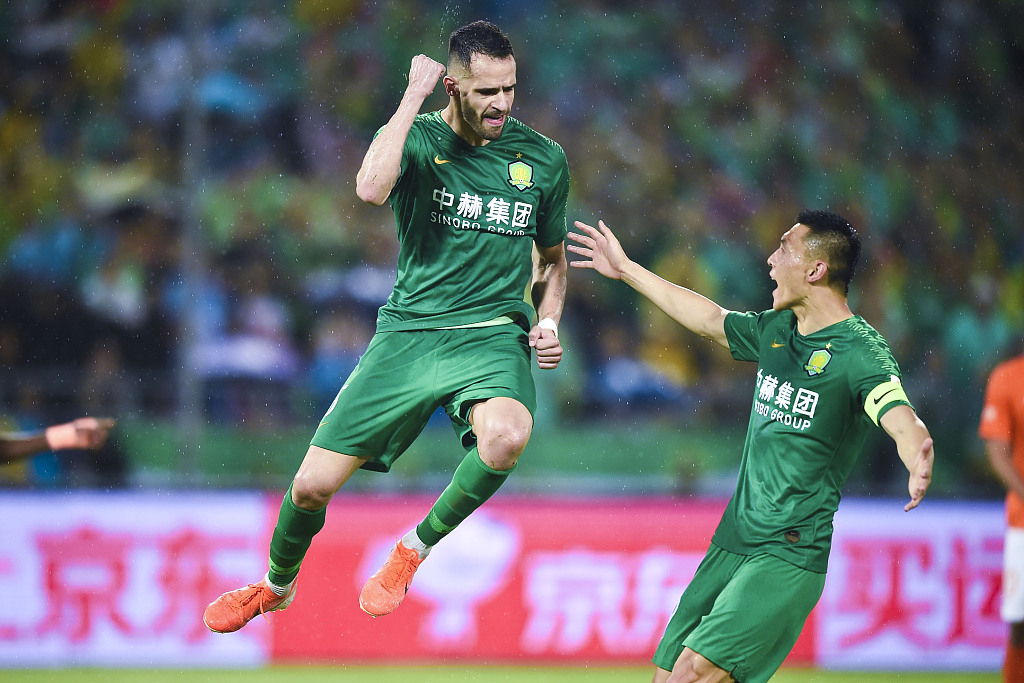 When Guoan skipper Yu Dabao, who returned to the starting XI following a suspension for four yellow cards, made a rare mistake in their own area and conceded possession to Rafael Silva, the Brazilian, unmarked, were incapable of unleashing a shot of sufficient conviction to trouble Guoan shot-stopper Zou Dehai.

If that miss must have made painful viewing for the increasingly dejected Li Tie, the Zall coach's anguish swiftly intensified. When Leo Baptistao came on as a second-half substitute and instantly beat three Guoan players on a mazy run before sending Jean Evrard Kouassi clear down the middle, the Ivorian striker spurned the glorious chance to equalize, blasting over the bar with only the keeper left to beat.

What happened next exhibited the unforgiving streak that Schmidt has instilled at Guoan, together with Zall's callowness and apprehension. As Kouassi and his teammates still rued the missed opportunity early on, Guoan were awarded a penalty after a brilliant counter-attack concluded with Liu Yi tripping Viera in the box, a decision which was upheld by VAR. Augusto then stepped up and calmly converted to make it 2-0.

Chants of "Guoan Guoan" soon began to bellow around the packed stadium as the hosts pressed for a third. And any hope of a Zall recovery was scuppered in the 75th minute when substitute Zhang Yuning made a spectacular solo run before picking out the irresistible Viera, who beat his marker with his first masterly touch and put the icing on the cake with a composed finish. Wuhan Zall test Beijing Guoan goalkeeper Zou Dehai on a number of occasions but fail to find a breakthrough during their clash at the Workers' Stadium, July 6, 2019. /VCG Photo

Wuhan Zall test Beijing Guoan goalkeeper Zou Dehai on a number of occasions but fail to find a breakthrough during their clash at the Workers' Stadium, July 6, 2019. /VCG Photo

For Guoan, the 3-0 scoreline spoke more of ruthlessness than overwhelming superiority. There was no lack of boldness in Li Tie's line-up. Zou Dehai, for instance, had to be alert to push several attempts by Zall that could easily have tied the score. Li has a disciplined yet audacious side, and it seemed in their nature to initiate thrilling strikes, even if Guoan's early dominance had left them with scant choice in the matter.

"I feel sorry for our fans who came all the way from Wuhan to support the team because we are unable to win for them," said Li, looking downcast throughout his media duties as Zall slipped down to 8th after their 3-game winning streak on the road came to an an abrupt end.

"My players have poured out their utmost effort and managed to create some clear chances – no mean feat given how well Guoan played."

Schmidt, in contrast, was in a rather relaxed mood after a hard-fought triumph that saw his team keep their first clean sheet in the league since May 12. "We suffered a minor blip in the last few games during which lapses in concentration cost us dear," observed the Guoan boss. 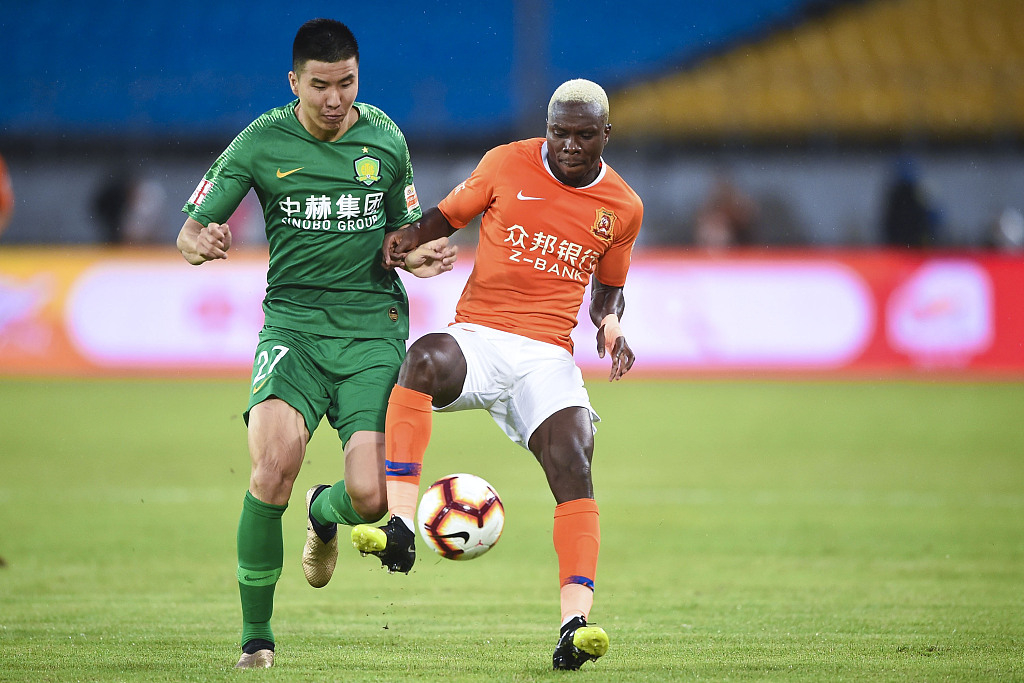 "While my defenders were not perfect today, they did exactly what I told them to do and were not caught out of position. Everyone carried their defensive duties admirably, and such a great performance took us to a well-deserved clean sheet and a win."

With Guoan's return to the CSL summit confirmed long before the final whistle, the home crowd took to Mexican waves to entertain themselves, and there was also a rousing chorus of "We are the champions" to heighten the expectations, but Schmidt refused to get carried away by the margin of his team's success.

"It was a fantastic game, and we were enjoying ourselves by getting the best out of the squad. However, there is still a long way to go in this title race," said the German tactician.

"We are in a great position, but the most important thing is the team recovered from the setback last weekend and showed spirit to fight back. I'm delighted with this win, and hopefully, we'll emerge triumphant again on Wednesday (against Chongqing SWM)." 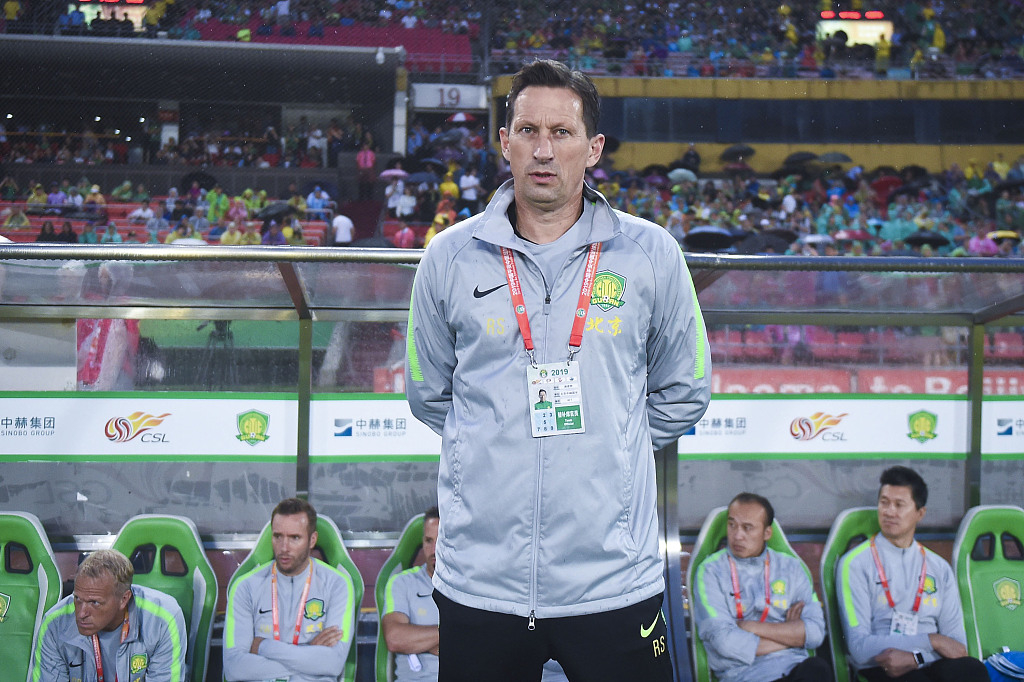 Beijing Guoan boss Roger Schmidt has set his eyes on the Chinese Super League title as his team surge back to the top of the table, July 6, 2019. /VCG Photo

Beijing Guoan boss Roger Schmidt has set his eyes on the Chinese Super League title as his team surge back to the top of the table, July 6, 2019. /VCG Photo

By the time the dust settled, the leadership of the CSL swings back into the control of Guoan, who restored their two-point advantage over title rivals Evergrande and Shanghai SIPG. The reigning champions managed to hold onto Guoan's coat tails by swatting aside Shenhua 3-1 in an action-packed Shanghai derby on the same night.

Yet Schmidt made no attempt to hide his unflinching determination should the title race go down to the wire.

"Our team has a two-point cushion at the top, and we won't give up. We will fight until the end."