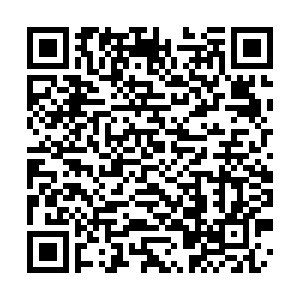 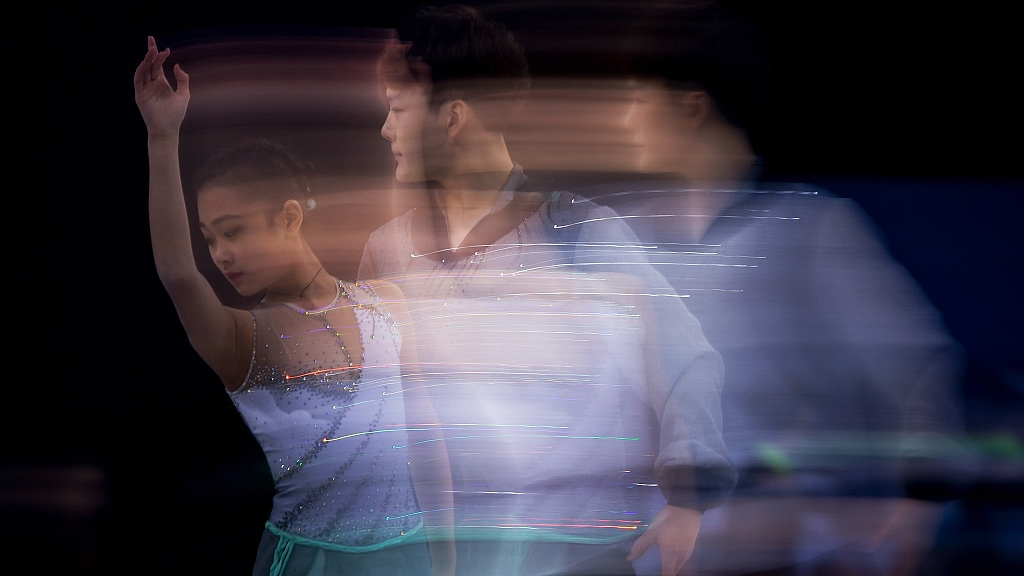 Lucy Nie remembers vividly the day her life was completely turned upside down.

It was a frigid night in December 2014 when the soft-spoken Chinese girl and her family were roaming the streets of Helsinki. Her disarming brown eyes lit up when she caught sight of an outdoor rink. Ethereal and dreamy, the ice sheets settled in against the entrancing glint of moonlight. With a palpable inner urge to have a go, she rented gears on the spot and took the plunge into the world of figure skating.

It has been a baptism of fire for Lucy. While most skaters take up the sport early — Finnish children as young as three are being taught to put on skate shoes — Lucy did not touch the gears until she was 9. "I really didn't know how to do it," the 13-year-old said of her first time on ice on that life-defining night in Finland. "I could only grip the railings for support and trudge slowly, but deep down inside, I knew I was hooked."

"As I took my first steps on ice, I fell in love with skating immediately. The feeling I had when I slowly moved across the ice was the best feeling I'd had all my life, with the cold air against my face, the wind blowing against my hair and the blades against the smooth ice." 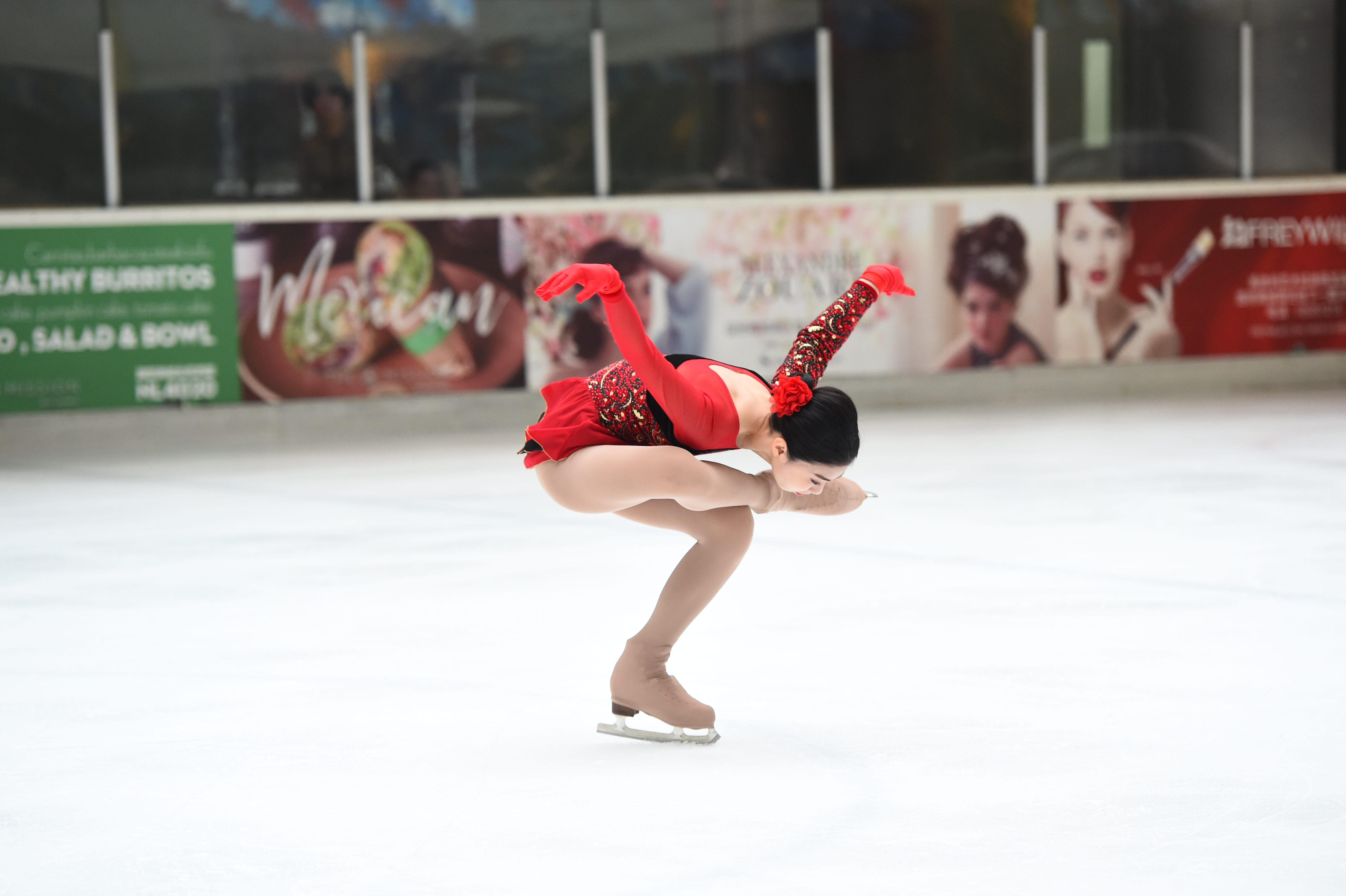 "She's so determined — nothing would derail her," Lucy's mother Bai Wei weighed in. "To be honest, I was a little concerned about her getting hurt because she had never ice skated before. Fortunately, she was wearing a fairly thick puffer jacket on that day, and it helped cushion against hard falls on the ice. She took quite a few tumbles but she didn't care one jot."

We perched in a corner of a lounge where the clank of skate blades provided a singular backdrop to the emotional undercurrent of an interview with the high-spirited young kid. There was crispy cold air emanating from a rink beside us but only warmth from Lucy.

"It's difficult to put into words what it's like to be on ice but I just love it and I have a strong passion for it. There is a feeling of unfettered joy and extraordinary freedom when I am skating," she enthused, huffing and puffing during a quick break from skating laps.

Right after returning home from Finland, Lucy managed to have her mother enroll her in a figure skating course in Beijing. Her father was less than impressed though. He would prefer Lucy to play a mainstream sport in China — soccer or badminton perhaps. But he ultimately acquiesced, reckoning that his fickle daughter just wants to try out different hobbies and would give up the sport once the interest dies down. 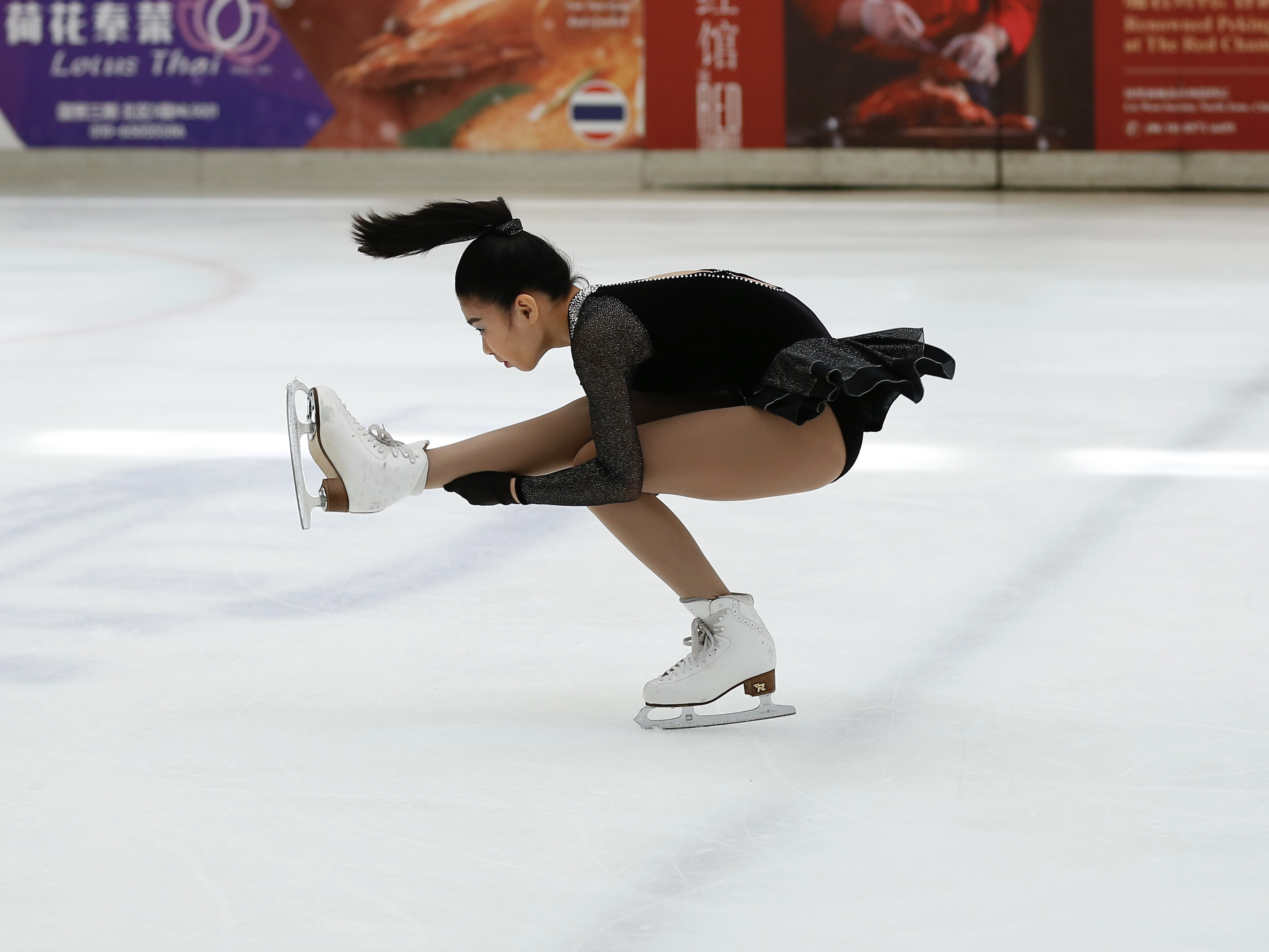 He was wrong. Over the last three years, Lucy has practiced religiously at the rink in intensive one-on-one lessons at least three times a week, without missing a beat. She might have joined the figure skating late, but she was eager to make up for lost time.

The rangy teenage girl, who has gone through a pubertal growth spurt lately, even threw a tantrum after a family trip scuppered her plans to continue training on New Year's Day. "Her commitment to this sport is astounding," Bai chuckled. "She cannot live without it now."

As a late bloomer, Lucy is unlike many little kids in the sense she does not project any apprehension or nerves. The benefits of being Lucy's age mean she has a seasoned view of what to expect.

"Falling is a huge part in figure skating. We fall every time we do something we don't master and fall hard on the moves we already know because we are not always precise in our movement. It hurts a lot, but the results afterwards are worth it," she said. 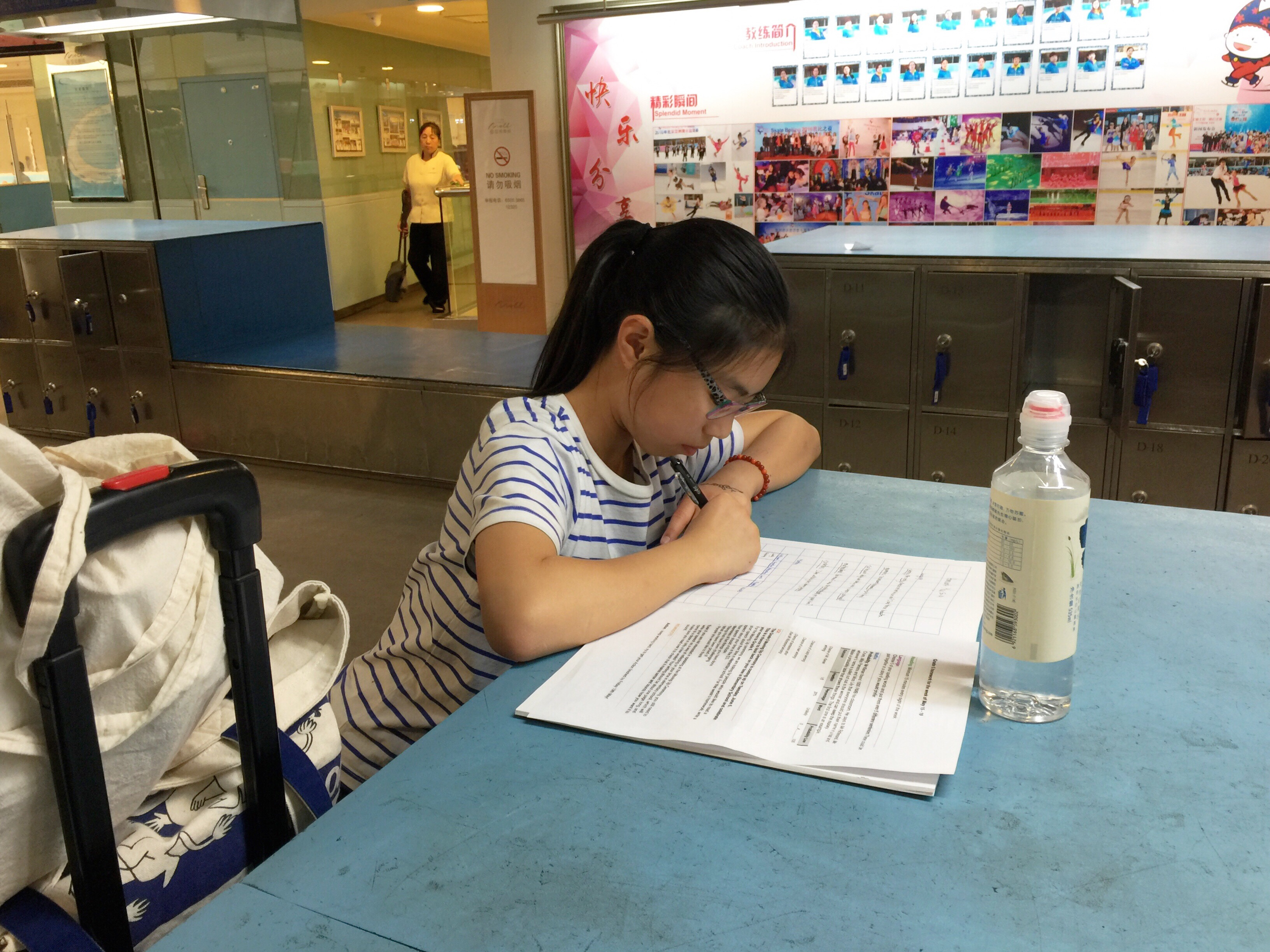 Lucy Nie avails herself of a short break from skating laps by doing her homework. /CGTN Photo

Lucy Nie avails herself of a short break from skating laps by doing her homework. /CGTN Photo

Not that Lucy's obsession with figure skating has impacted her academic performance. As a straight-A student who is addicted to devouring books, she exudes an impressive persona and strikes a perfect balance between school and sports. "Skating is an incredible way to reduce stress levels, in much the same way that reading helps me relax," she grinned.

It should come as no surprise that Lucy credits reigning world champion figure skater Nathan Chen with inspiring her to be a well-rounded person who thrives on both academics and sporting excellence. "Chen is endowed with spectacular jumping skills and he beat [two-time Olympic gold medalist] Yuzuru Hanyu by more than 20 points [at the 2019 world championships]," she observed. "Meanwhile, Chen is currently a student at Yale University, which is amazing and a big plus for me."

Lucy's friend and fellow skating enthusiast Sara Li agreed and nodded intently as she recounted her own love affair with the sport. "It's marvelous to watch those attractive skaters enjoy themselves on and off the ice," said the 8-year-old who took up figure skating at 6. "I love it because dancing is my thing and the rink becomes a dance floor when I hit the ice."

In her cute jacket and bright pink skates, Sara is the darling of the rink, and Nina Wang has developed into a reasonably full-fledged skating mom, creating a checklist to keep Sara on track when her daughter practiced during summer break.

"It's just about showcasing your talent and picking up a new skill," Nina said, enraptured by Sara's performance on the rink. "As long as she wants to skate, I'll support her. This experience might stand her in good stead for future school enrollment. Who knows?" 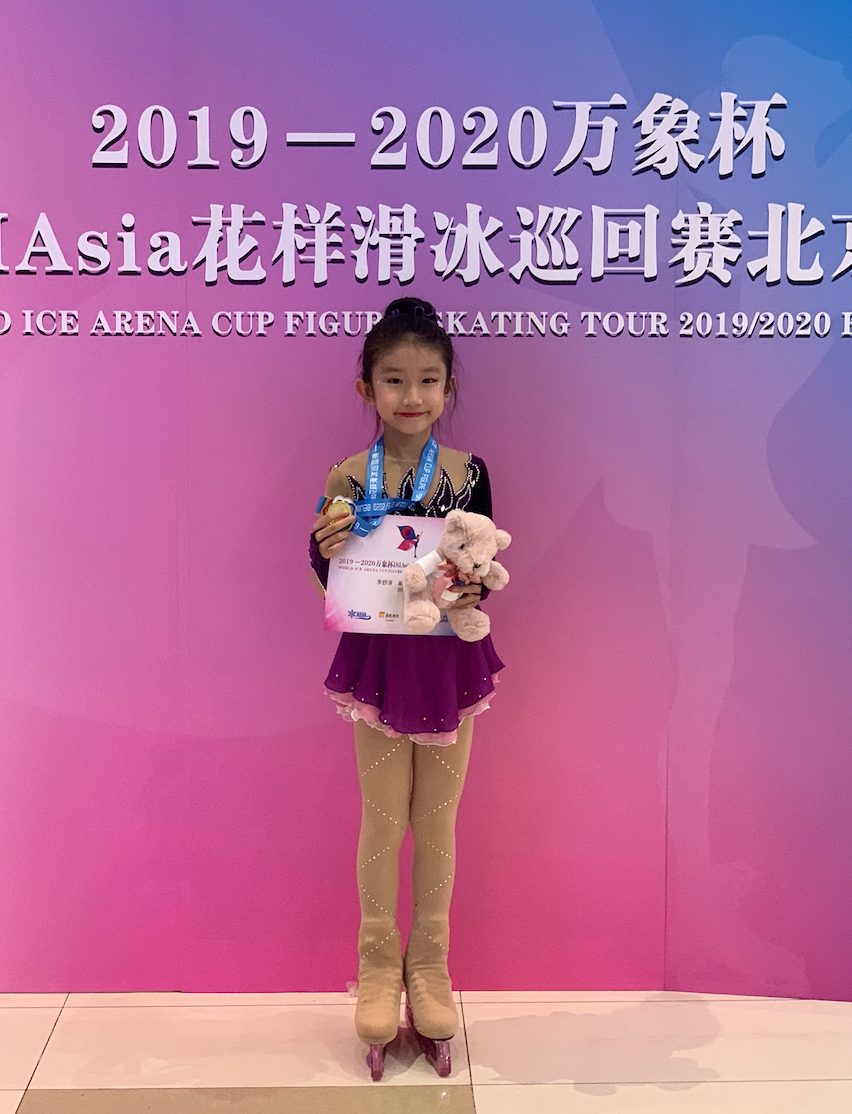 The sweeping enthusiasm of Lucy, Sara and Nina is reflected across China where figure skating is seeing explosive growth. There are more Chinese devotees involved in every way, watching it, writing about it, learning it, even and testing it.

Nearly 5,000 brave souls took the first national figure skating level tests of the 2018-19 season, according to the latest data. The unprecedented demand even prompted organizers to introduce several measures to place limits on the number of test-takers. It's a far cry from the early days when skating teachers had to scratch their heads and pull students out of lessons to ask them to have a crack at playing on ice.

Li Yan, a veteran instructor who coaches Lucy and Sara, reckoned that the landscape of figure skating in China has transformed since Beijing was awarded the right to host the 2022 Winter Olympics in 2015.

"Beijing 2022 has boosted interest and participation in rinks like ours. Over the last few years, there's been a huge swell in people getting in contact," said Li, who has two decades of experience in professional figure skating. "We're accessing more patrons and students that we didn't have before. Little children, boys and girls and even adults are starting to trickle in with skates in hand." 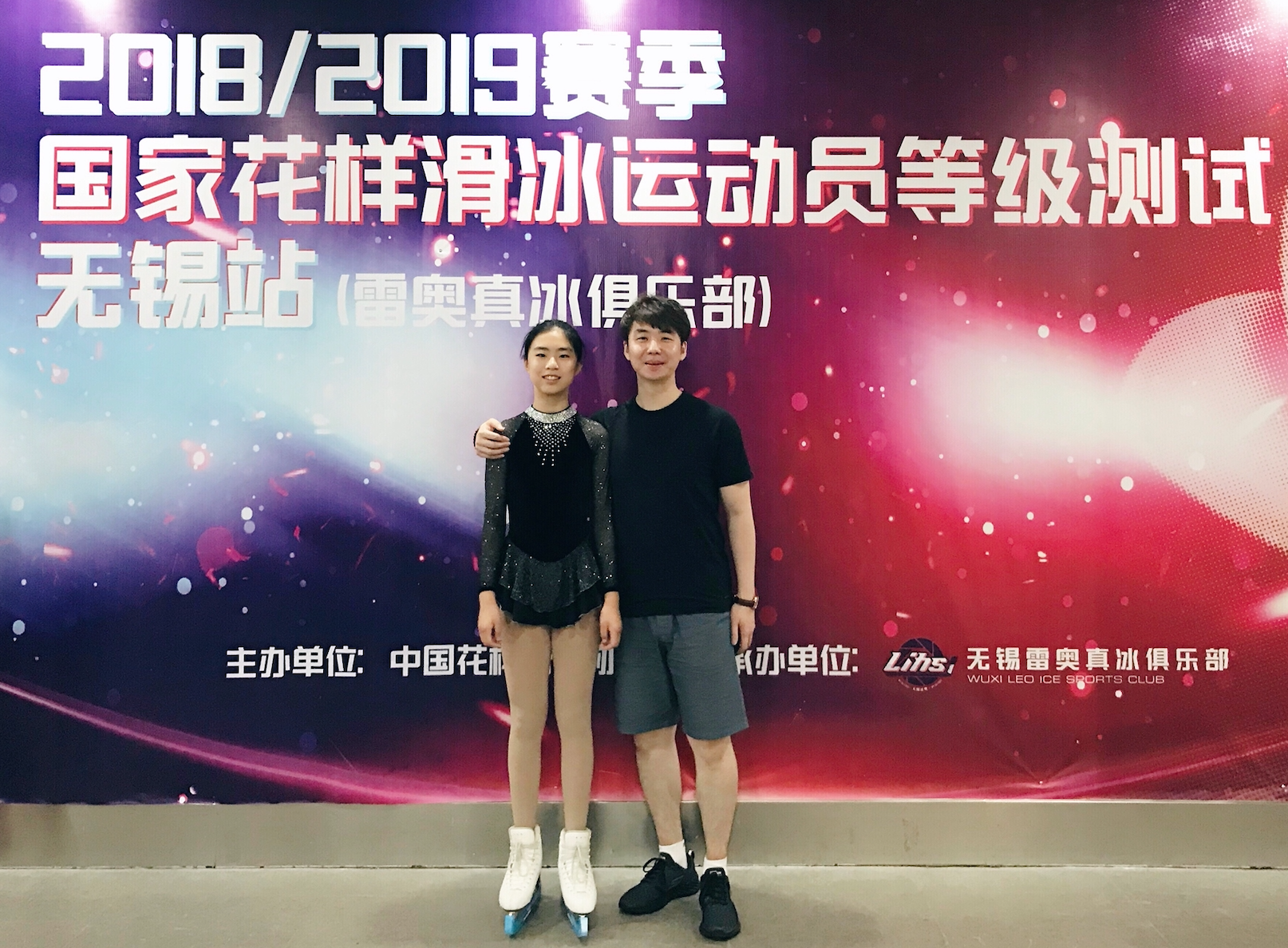 The lack of facilities is no longer a stumbling block for skating buffs in Beijing and other major cities in China. A number of figure skating clubs and outdoor rinks, which offer services at an affordable price, have sprung up around the nation, giving even casual fans a decent spot to have a shot.

Li welcomes the increased interest and dynamism in figure skating, but insisted he wants to see a larger group of people getting involved, adding that the Beijing Olympics was an important step to popularize this mesmerizing sport.

"Obviously it's a good start, yet there is quite a long way to go. China has spared no effort in promoting and supporting figure skating and other winter sports. And it's up to us to prove we mean business."

Brushing off the fresh wounds she suffered at the end of the day, Lucy is dead serious about the path she would take. "Figure skating is, and always will be, my favorite passion. I know there would be challenges ahead, but I'm ready to face them."