Graphics: Is China ready for an aging population?
By Zhao Hong 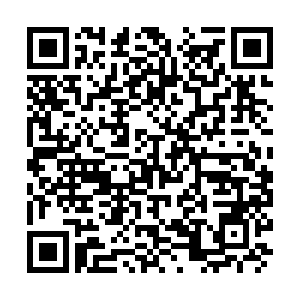 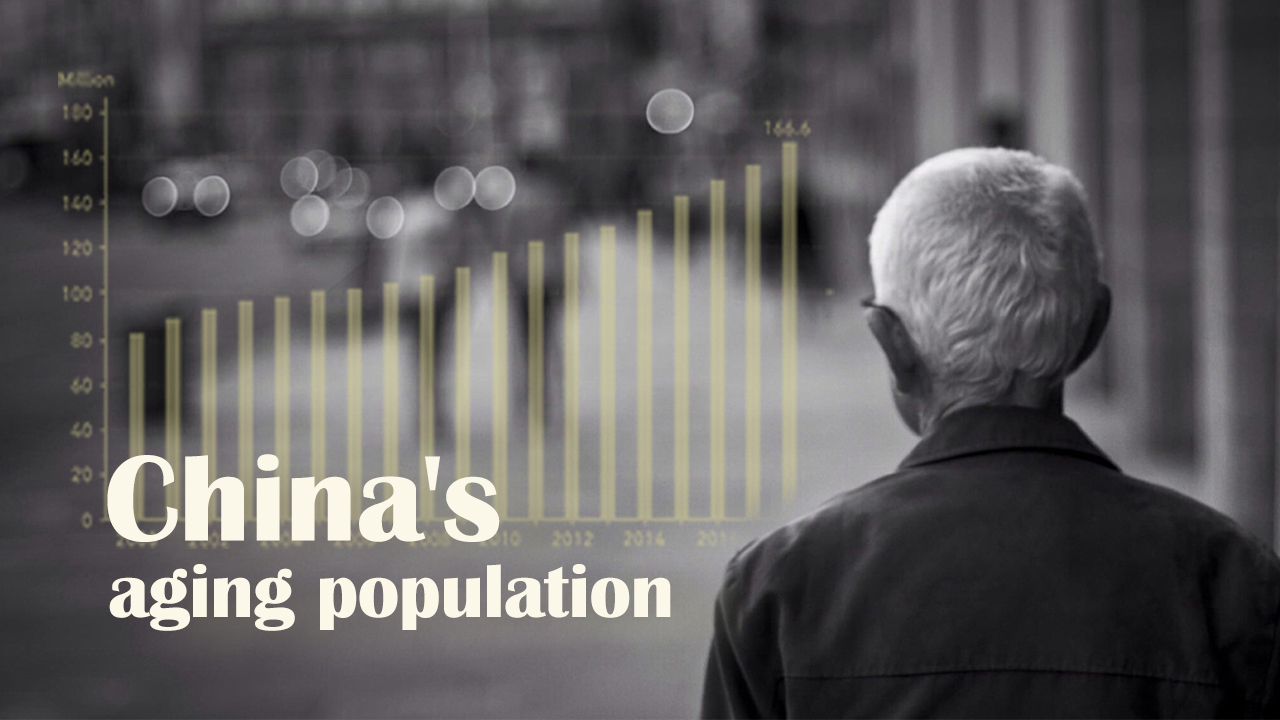 China, the most populous country in the world, is facing the rapid graying of its population.

At the end of 2018, 11.9 percent of its population (166.6 million people) were 65 or older, according to data from China's National Bureau of Statistics. Generally, a society is considered relatively old when the proportion of the population aged 65 and over exceeds 8 to 10 percent. 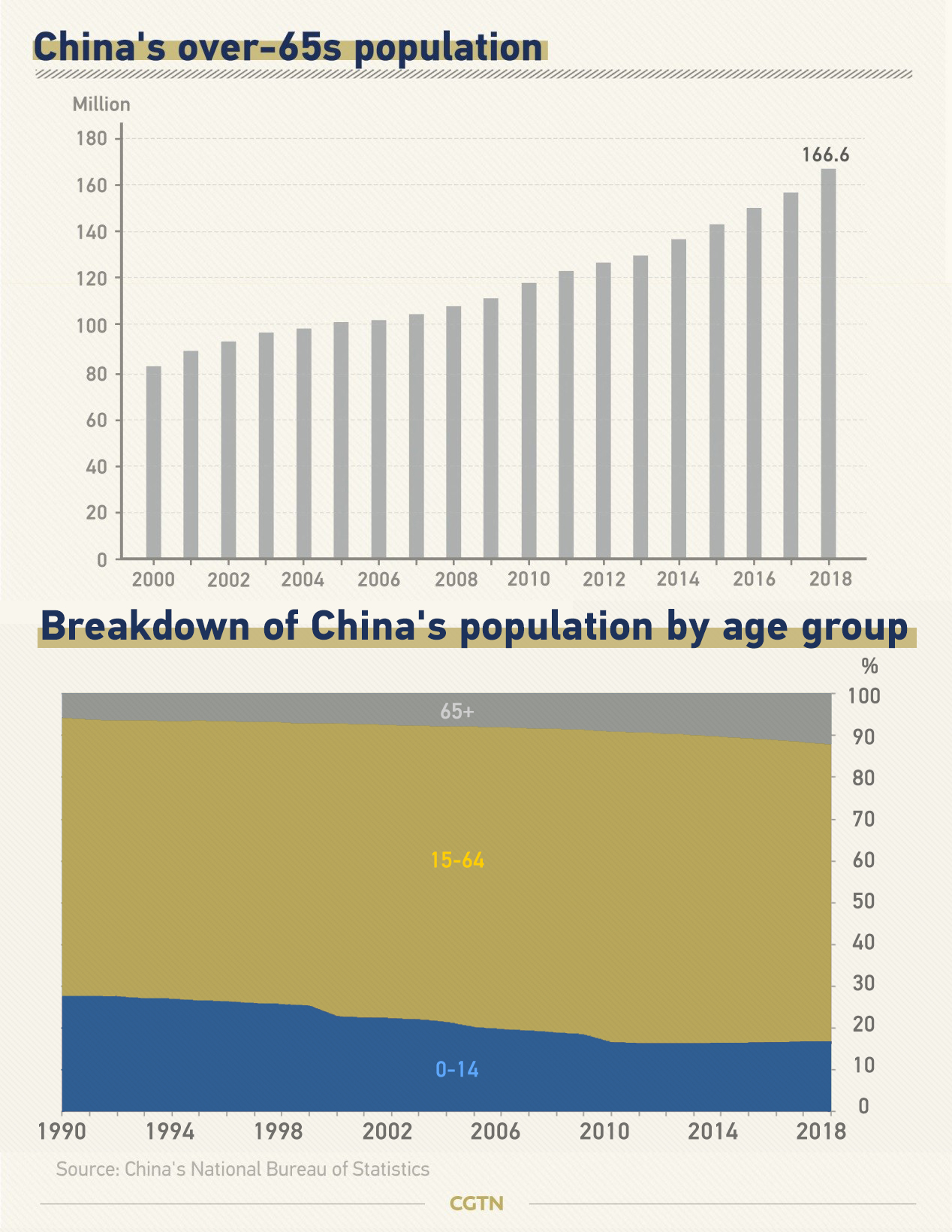 The ratio of young to old will be dramatically imbalanced by the rising ranks of the elderly. Seen from the graphic below, China's age dependency ratio for over 65 surpassed the world average's in 2009 and became three percentage points higher in 2018.

The age dependency ratio of older dependents is the proportion of people older than 64 to the working-age population, between 15 and 64. 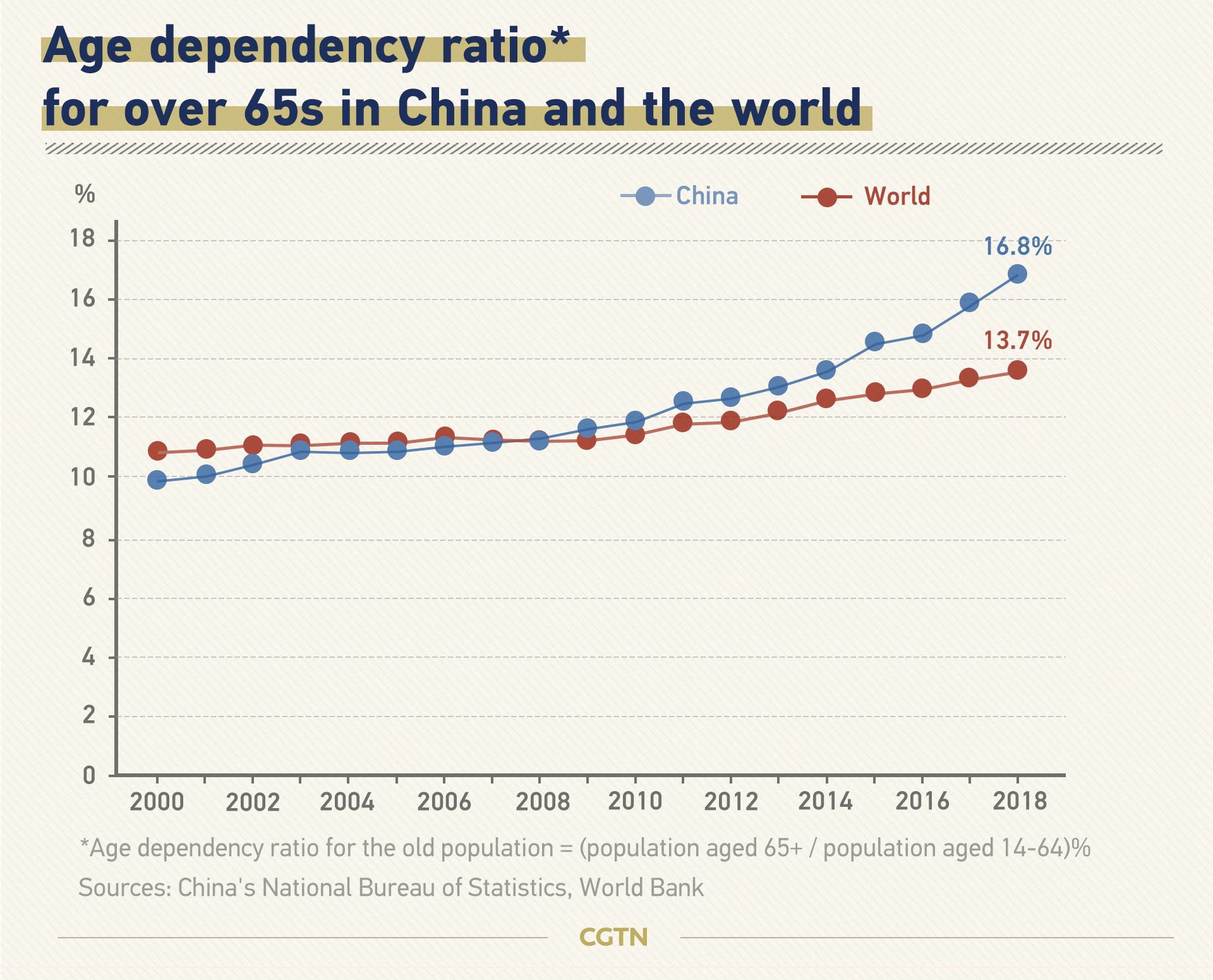 If we take a closer look at different regions in China, the whole country has entered an aging stage, but at distinct levels.

In southern Guangdong Province, for example, the age dependency ratio for the elderly is 10.3 percent, meaning 10 people in working age (14-64) support one senior citizen. Guangdong also has the largest GDP in China. However, in southwestern Chongqing Municipality, which had the highest age dependency ratio for the elderly in 2017, five young people need to support one elderly person. 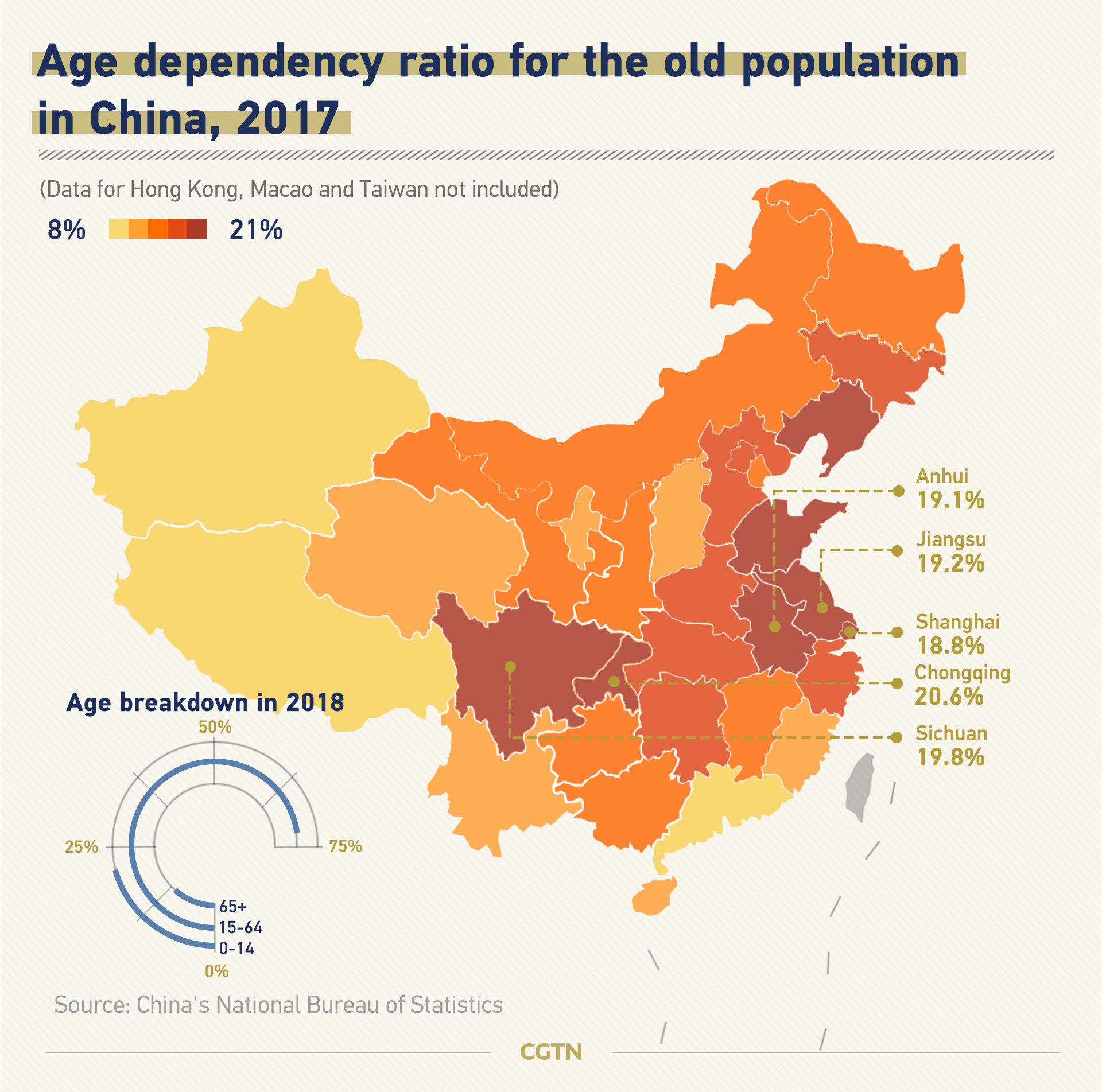 China's aging crisis is well underway. Given the declining fertility rate, China's aging process is irreversible and increases pressure in areas like pensions and health systems.

China has taken measures to deal with the aging population, including building and improving medical and health systems for the elderly, promoting flexible retirement, encouraging family care combined with social care, and loosening birth policy.

Regions where the aging population is becoming a severe issue have already started to find different strategies to try and balance the situation, such as in Liaoning Province, where retirees are encouraged to start private businesses.

China formally scrapped its one-child policy in 2016, and has since encouraged couples to have a second child – but the number of births has not surged as expected.

After a bump in 2016 – consisting mainly of women who'd waited to have a second child – the birth rate then fell the following year. Many factors can influence a country's birth rates, including the number of women in fertility age, their educational level, and the overall social and economic development. 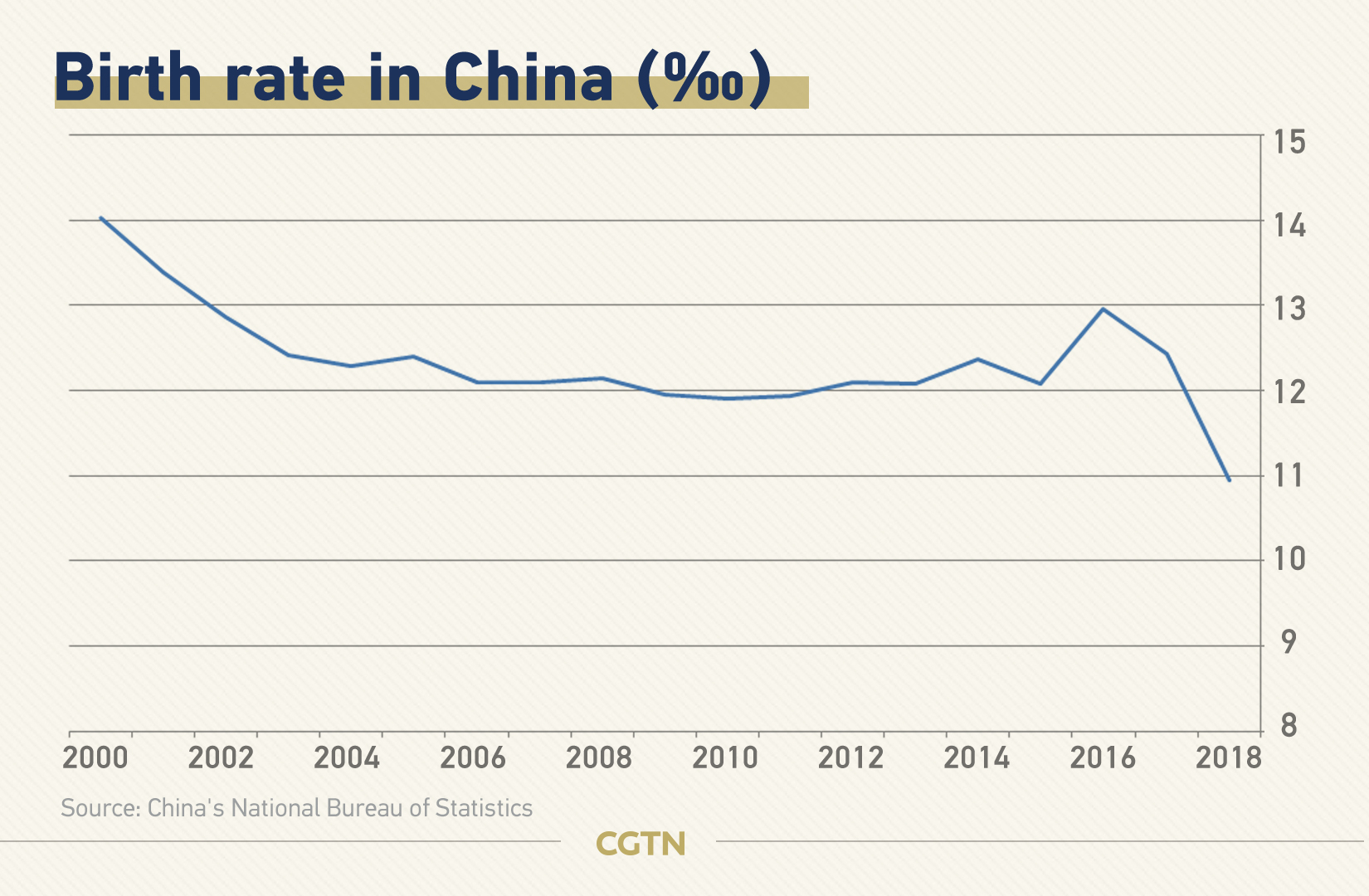 According to reports from the Chinese Ministry of Finance, China's pension expenditure has exceeded its collected premiums, and is largely relying on financial subsidies. Maintaining the smooth operation of pensions poses a major test for state and local finances.

Experts say delaying retirement and pensions entering the market will help to alleviate the current predicament to some extent. However, it is necessary to continue to further the reform of the pension system in order to solve the problem at its root. 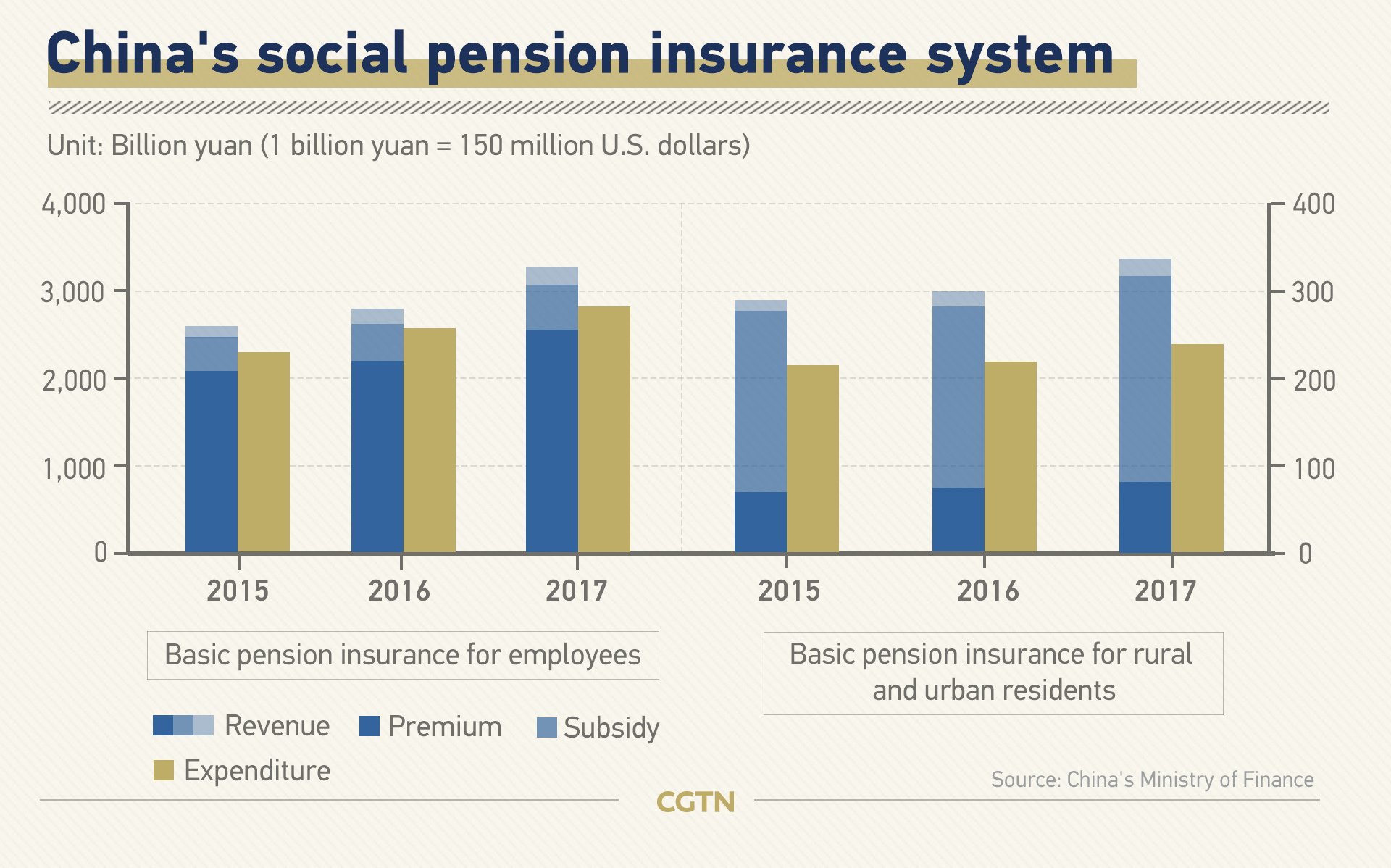 People worldwide are living longer and not making enough babies. UN figures show that the global number of over-65s (705 million) surpassed that of under-fives (680 million) at the end of 2018. It is a pattern seen across the world. All countries face major challenges to ensure that their health and social systems are ready to deal with this demographic shift.

A prime example is Japan, where life expectancy at birth is nearly 84 years (the world's highest national rate), the age dependency ratio for the aged is the world's highest, and the birth rate is low. More adult diapers are sold in Japan than infant ones.

While this shift in distribution of a country's population towards older ages started in high-income countries like Japan, it is now low- and middle-income countries that are experiencing the greatest changes. The World Health Organization expects that by the middle of the century many countries, including China, will have a similar proportion of older people to Japan. 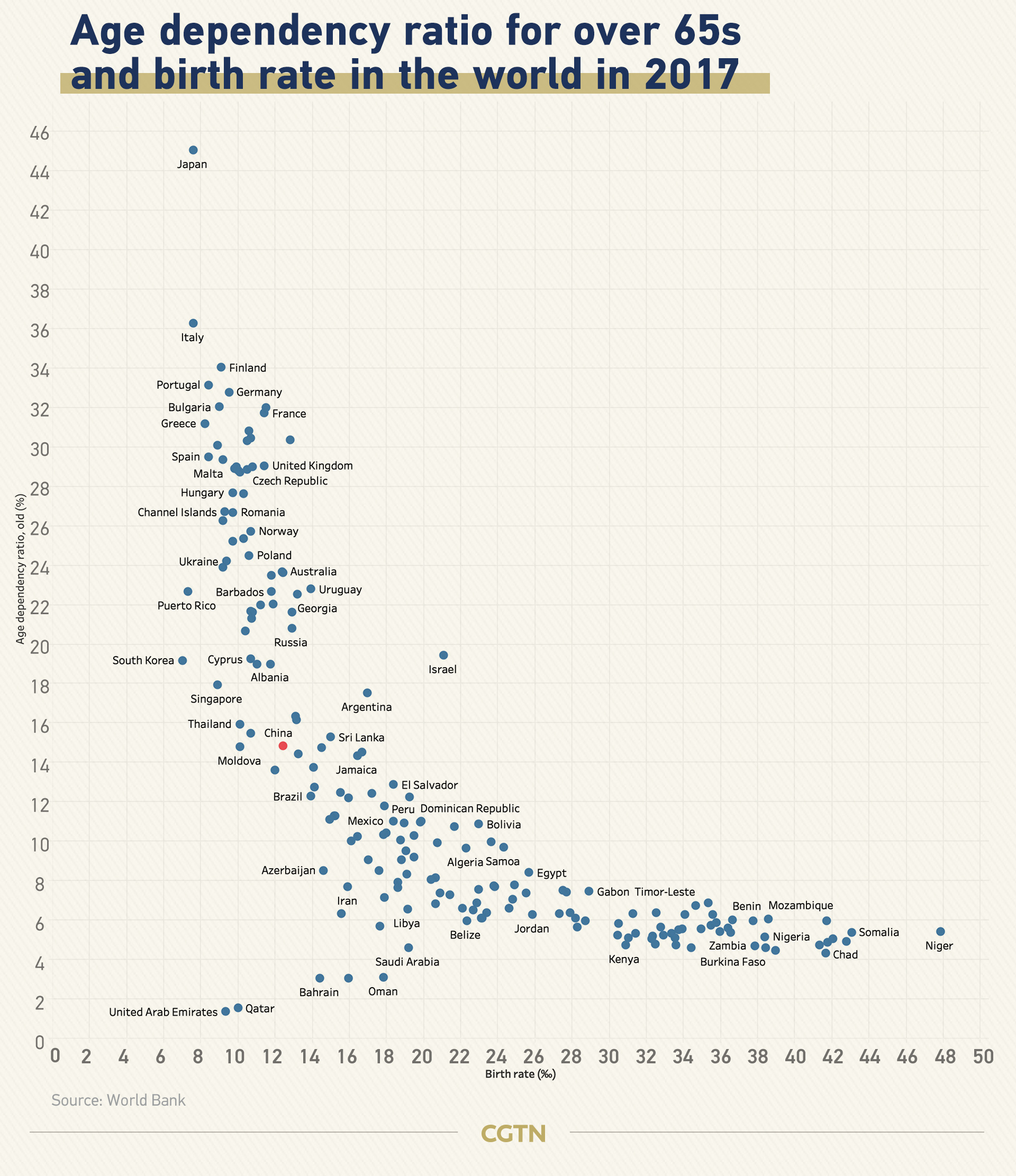 Older people are often assumed to be frail or dependent and a burden to society, which can lead to discrimination, affect the way policies are developed and the opportunities older people could have.

Population experts warn that policies promoting elderly health need to play a crucial part in mitigating the effects of aging populations, arguing that healthier individuals are more able to continue working for longer and with more energy, which could result in lower healthcare costs.

China still has a long way to go coping with its aging population. What's certain is that the clock for the "aging time-bomb" keeps ticking, calling for immediate action.