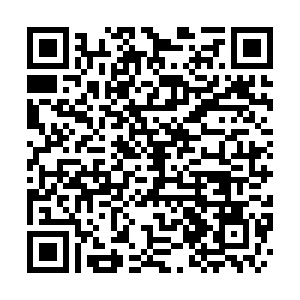 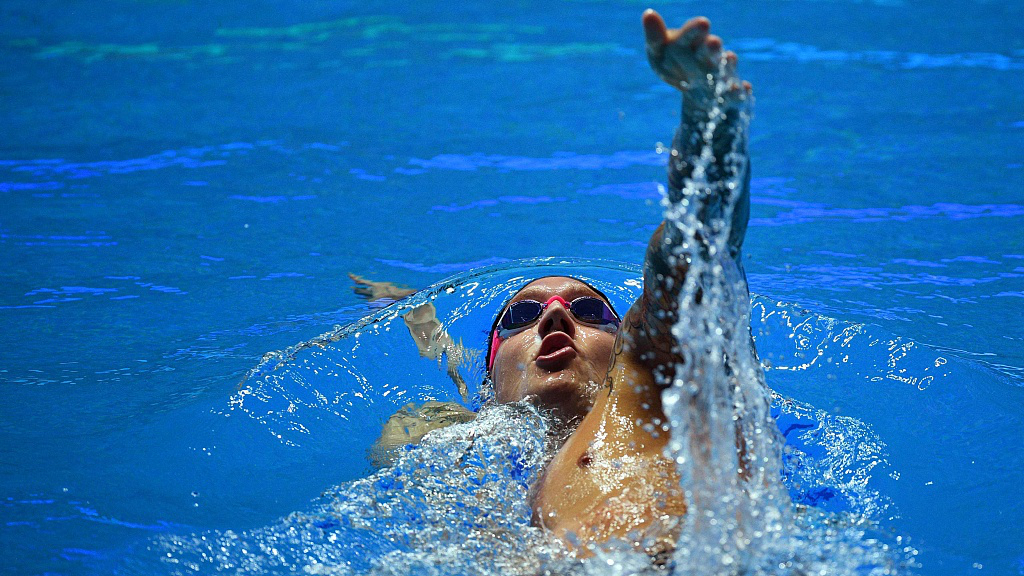 Caeleb Dressel warms-down after in the diving pool after the final of the men's 100m butterfly at the 2019 World Championships in Gwangju, South Korea, on July 27, 2019. /VCG Photo

Caeleb Dressel warms-down after in the diving pool after the final of the men's 100m butterfly at the 2019 World Championships in Gwangju, South Korea, on July 27, 2019. /VCG Photo

In one of the most high profile and exciting swimming events of the ongoing FINA World Championships in the South Korean city of Gwangju, American Caeleb Dressel won the men's 50m in style to bag his third gold medal on Saturday. The 22-year-old, who came in as the favorite, made yet another stunning splash in the pool, while setting a new championships record.

Dressel, who has already been compared to legendary countryman and Olympic icon Michael Phelps after emulating the latter with seven titles in the 2017 World Championship, didn't disappoint his increasing number of fans and said the best is yet to come. Earlier, he got off to a good start in the 50m freestyle and took the early lead with Brazil's Bruno Fratus and Kristian Gkolomeev of Greece trailing him closely.

However, the American ace powered ahead and was just a hair off the red line indicating the world record. But his stunning finish was more than enough to better the world championships record as Fratus came second and Gkolomeev third.

Dressel’s golden run continued in the day as he snatched his second gold in the men's 100m butterfly final. He broke the world record in the semi-finals in 49.5 seconds and was the first to make the turn with Russia's Andrei Minkov less than half a second behind. The American swimmer then pulled away on the final stretch and went on to win his second of the day and the fifth gold medal of this meet in 49.66 seconds. Minkov got silver while South Africa's Chad Le Clos grabbed a bronze.

Dressel’s third gold of the day came in the mixed 4x100m freestyle relay, which saw the American team of Dressel, Zach Apple, Mallory Comerford, and Simone Manuel winning the first place in 3 minutes, 19.40 seconds, while also breaking the world record. Australia secured silver and France the bronze while Japan broke the Asian record in 3 minutes, 24.67 seconds. It was Dressel's third gold on Saturday night and his sixth overall at this year's World Championships.

Meanwhile, in the women's 200m backstroke final, 17-year-old American Regan Smith, who broke the world record in the semi-finals, won by a large margin in a time of 2 minutes, 3.69 seconds with Australia's Kaylee Mckeown taking silver and Kylie Masse of Canada grabbing bronze.

In the women's 50m butterfly final, Ranomi Kromowidjojo from the Netherlands was in the lead with Sweden's Sarah Sjoestroem pressing hard right next to her. However, in the last 25 meters it would be Sjoestroem, who edged ahead and touched the wall first in a time of 25.02 seconds to win her first gold in Gwangju. Kromowidjojo settled for silver with Egypt's Farida Osman earning the bronze. 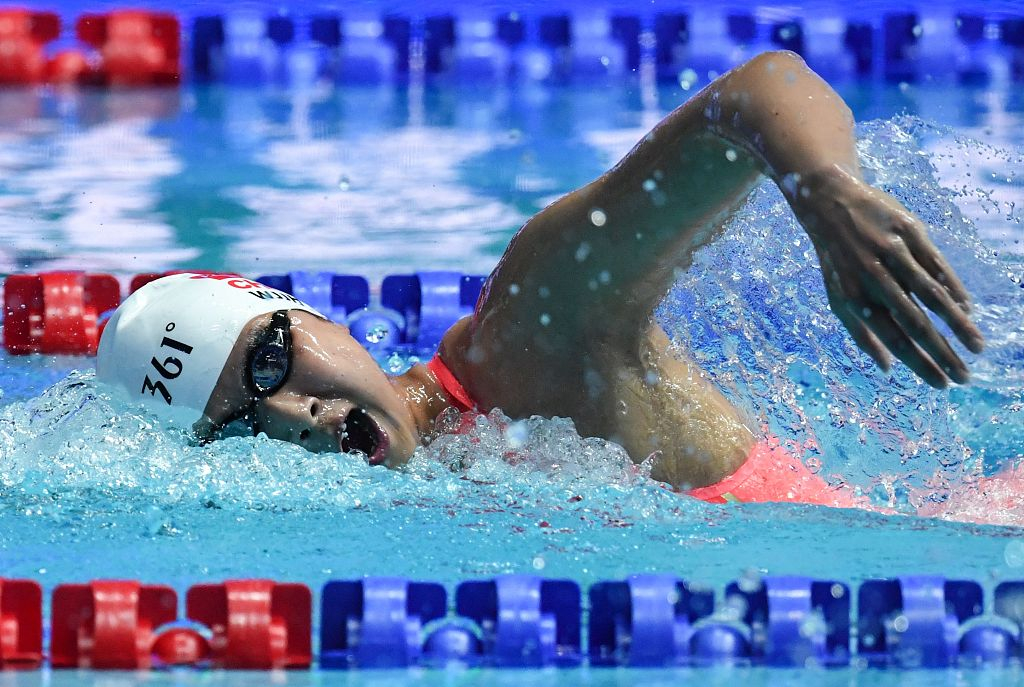 China's Wang Jianjiahe competes in the final of the women's 800m freestyle at the 2019 World Championships in Gwangju, South Korea, on July 27, 2019. /VCG Photo

China's Wang Jianjiahe competes in the final of the women's 800m freestyle at the 2019 World Championships in Gwangju, South Korea, on July 27, 2019. /VCG Photo

In the women's 800m freestyle final, China's Wang Jianjiahe, who won her first-ever World Championships medal with a bronze in this tournament in the 1,500m freestyle, was hoping for a spot on the podium again, but eventually came up well short against a strong field.

Wang finished sixth as defending champion from the U.S. Katie Ledecky put on a burst of speed to complete the last length in 29.19 seconds to touch the wall first in a time of 8 minutes, 13.58 seconds and win her 4th consecutive title in this event. This was also her 15th World Championships gold.

Wang, who finished sixth in 8 minutes, 18.57 seconds, said later, "I didn't swim at my best level. I was a little bit worse than I expected. I competed in multiple events and the 800m freestyle final was my last contest, so I'm a little bit tired."

In the men's 50m backstroke semi-finals, Chinese star Xu Jiayu came third in heat with a time of 24.73 seconds but came sixth overall to advance to the final while Russian Kliment Kolesnikov claimed the top spot in 24.35 seconds.

In the women's 50m freestyle semi-finals, China's Liu Xiang took on Australian Bronte Campbell in a swim off after they tied for eight in 24.46 seconds. However, in the battle for the last spot in the final, Asian record holder Liu came up just short in 24.53 seconds, 0.15 seconds shy of the Australian who has marched into the final.

In the women's 50m breaststroke semi-finals, China's Suo Ran went on to clock a time of 31.46 seconds which was not enough to qualify for the final. American Lilly King had the fastest time of 29.84 seconds.