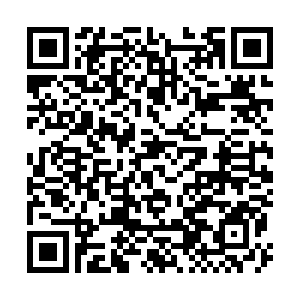 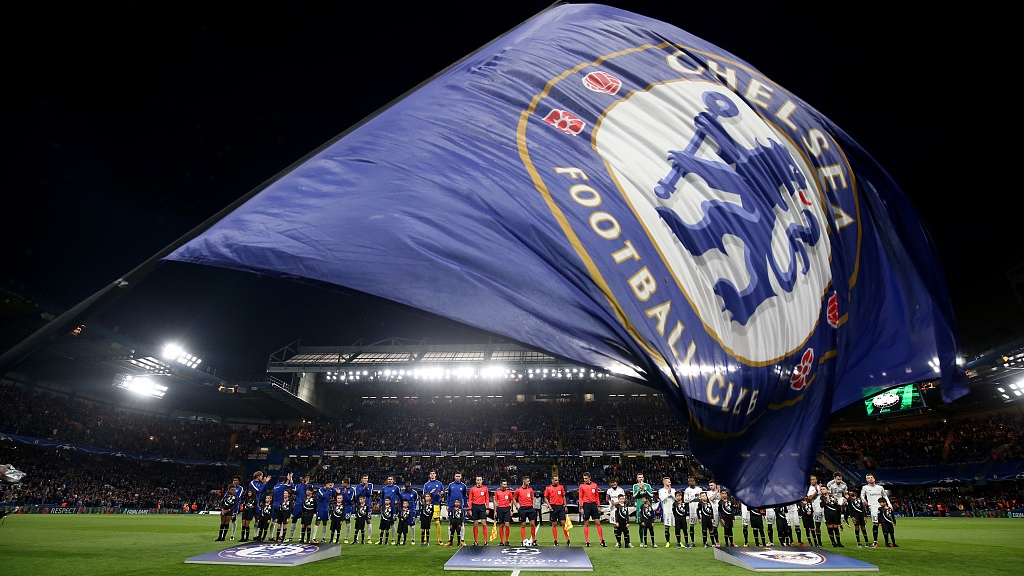 "I'm still excited by it, to be honest," a mirthful Gary Twelvetree said on a sunlit morning as he cast his mind back to April 2017, when he was appointed Chelsea FC's director of marketing after nailing a formidable interview with the club's legendary owner Roman Abramovich.

Twelvetree is a self-effacing maestro who wears his personal achievements lightly. He was previously executive director at Visa, the world's largest payments network, and global brand director of Barclaycard, which processes almost half of the UK's credit and debit card transactions. But Twelvetree acknowledged that strutting his stuff in one of the most recognizable football powerhouses, for all the experience his glittering CV brings him, could be an intimidating and daunting task.

"This is probably the most diverse job I've ever had. People quite often say that football is just football, but it's not. It's a reflection of society. What I'm most proud of is putting together a professional team that can cope with that diversity." 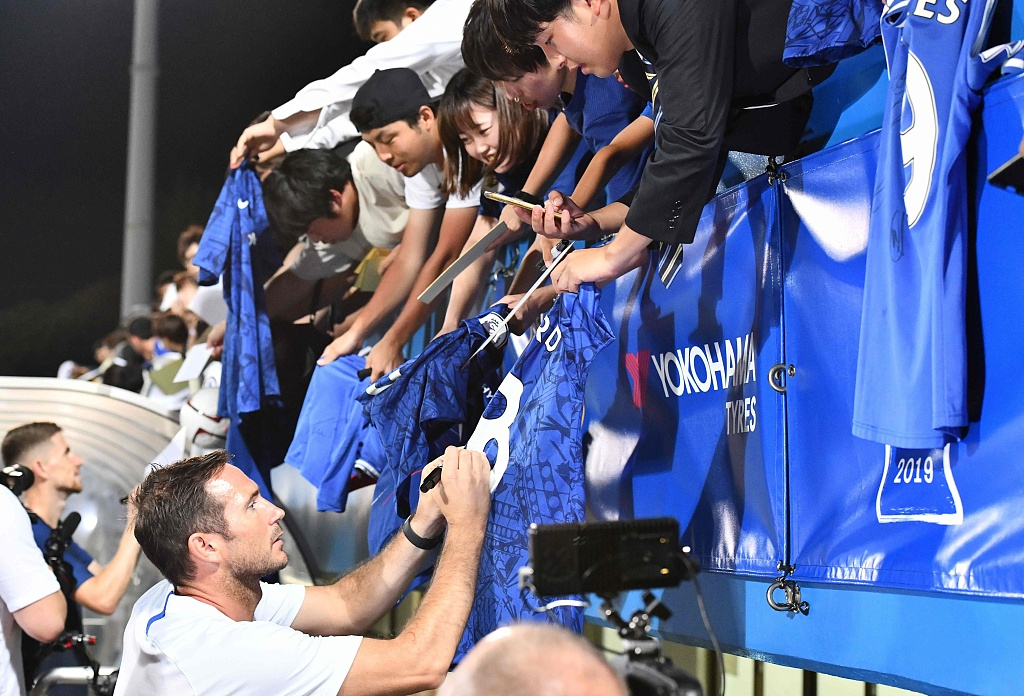 "When you go on preseason tour, it actually makes you realize how lucky you kind of are because you have fans that are just so engaged with the club, the brand, the players, to the point that they have tattoos on their arms and there are not many businesses in the world where you could see that happen. It's an incredible honor to work for such a big football club."

Twelvetree is grounded in the very ordinary way in which he copes with the monstrous demands of the cutthroat business side of world football. That light touch contrasts with his fierce aims. His eyes lit up when asked if he was satisfied with what he's achieved after more than two years into his new job.

"I'm never satisfied. If I'm satisfied, I'll probably feel bored. But I'm satisfied with the progress we've been made. We launched a new website and built a new app, which in the first season got 2.5 million downloads and over 600,000 monthly active users. And we devised a new strategy of digital first and localization."

"We are the fastest growing Premier League club on Chinese social media. We still got a lot to do. Football is huge, the power of football brands, whether it be the club or the Premier League, is huge. So the biggest issue has been how do you prioritize what you have to do because you can do everything." 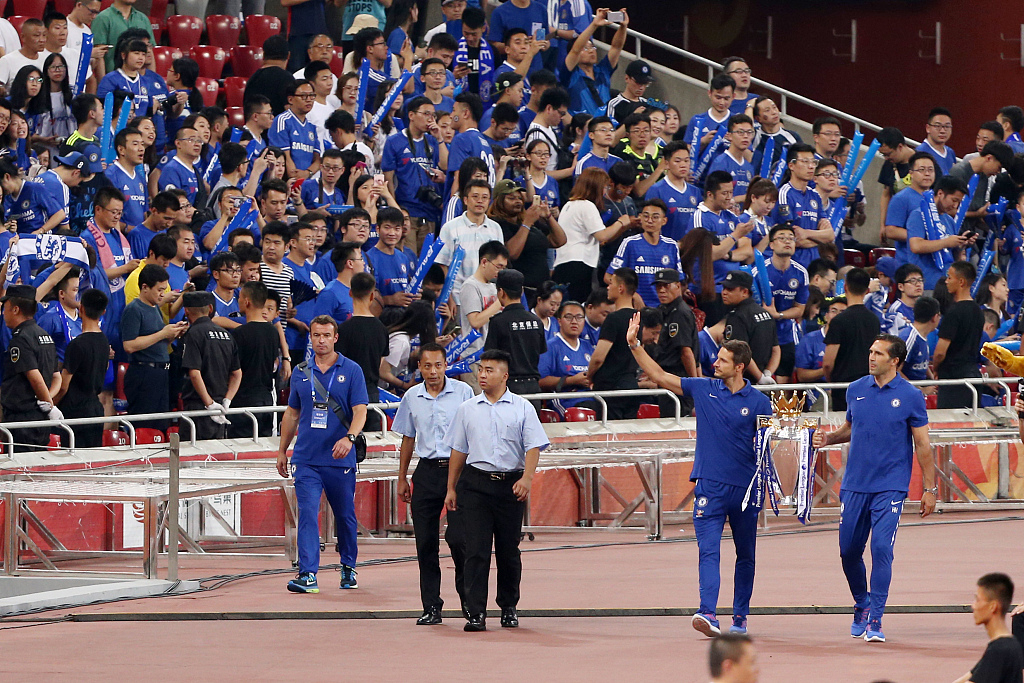 However, amid all the palpable optimism and high-spiritedness, there's always bound to be obstacles as Chelsea attempt to navigate the intricate nuances, languages and customs of a foreign country. Is that so? Twelvetree paused, in a rare break because he is such an exuberant and vivacious speaker. "I don't see them as obstacles. I see them as differences."

"Every culture is completely different. I've lived in the [United] States for a long time. People say they speak English, so everything is the same [as in the UK]. Of course it's not, it's so different. You have to embrace those differences and that's where the opportunities will come from."

"In China, they have different social media channels and that creates an opportunity because it means we've got a different conversation that we could have with those channels versus what we would have with Facebook or Google. This is a big journey and you are not gonna crack things overnight."

Twelvetree burst out laughing before nodding when I chipped in by saying that at least football fans in different countries share the same trait: they are fickle. He grew more serious when admitting that their capriciousness is not necessarily a bad thing. 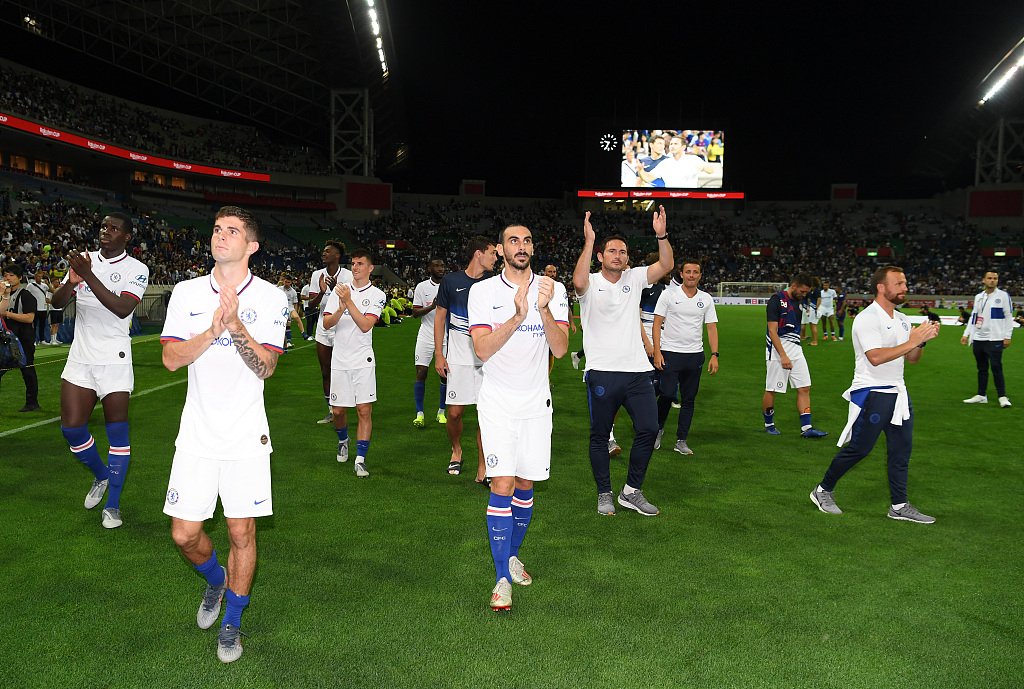 Chelsea players applaud fans following their 2-1 victory over Barcelona in a pre-season friendly at the Saitama Stadium, July 23, 2019. /VCG Photo

Chelsea players applaud fans following their 2-1 victory over Barcelona in a pre-season friendly at the Saitama Stadium, July 23, 2019. /VCG Photo

"Fans are fickle all over the world, without a shadow of a doubt. That's probably one of the only consistencies that they are fickle. But in a way, they deserve to be, because they are so passionate. So you have to see the upside of that: they care."

Sadly, nowadays fans' sentimental attachment to football looks increasingly fragile with many understandably aggrieved that they are being priced out of going to watch the game they love. As season tickets at some English clubs reaching more than 1,000 British Pounds (1,217 U.S. dollars), youngsters and the less well off, who have long been the backbone of support, bear the financial brunt of the fallout.

Twelvetree suggested that Chelsea have backed the call for lower prices and are sympathetic to those supporters. "We've not had a rise in ticket prices at Stamford Bridge for ages. And we are blessed with a huge membership base that are waiting to get season tickets."

"If you look at the quality, you get what you pay for. The Premier League is the most competitive in the world, has some of the best players and managers in the world. People want to go and see that." 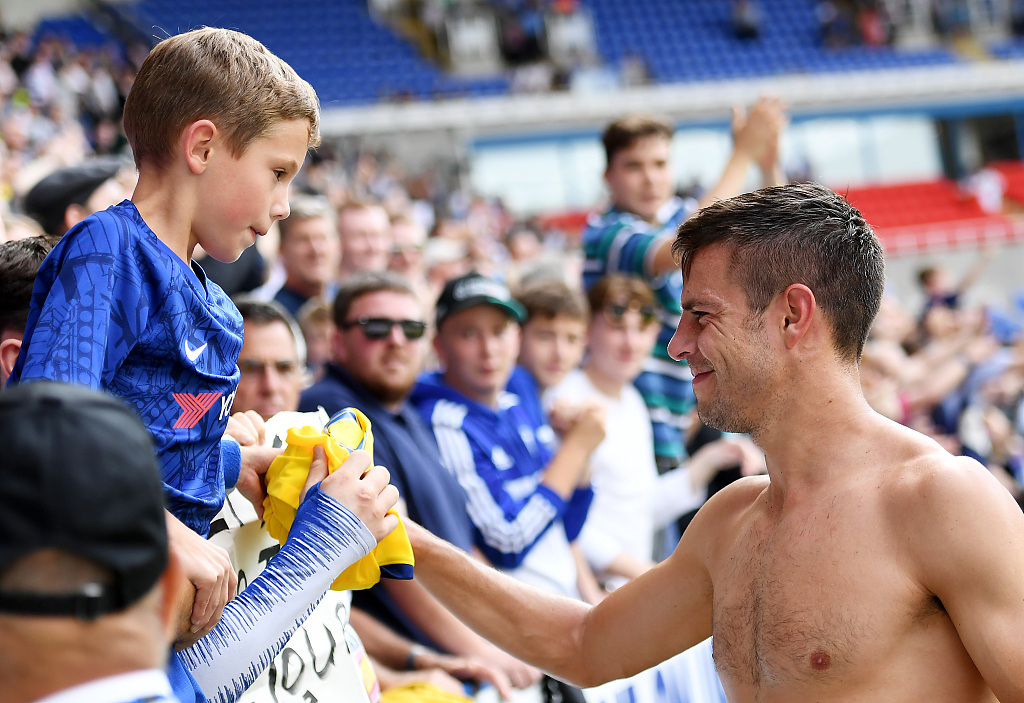 "We position ourselves as a London club but we are not just a club from London. We are one of the first international clubs that embrace foreign players. Interestingly, Chelsea is a club that was devised in the first place purely for entertainment."

"A lot of clubs came out of workers, factories and things like that, while Chelsea was born from someone's idea of having something that entertains people. And I think we still have that character and charm today."

Prolonging such magnetism is no mean feat. And while almost all major football giants are working to tap into the huge Chinese market for growth, Chelsea have quietly moved ahead of their rivals.

"We gonna have Chinese content programs that produced in our training ground Cobham in the new campaign and I think that will be a first for any club in the world," beamed Twelvetree. "The move shows the commitment to doing things that are relevant for our Chinese fans. It's a significant investment and signifies the different approach we are gonna take in China."

Twelvetree slightly grinned and widened his eyes when asked whether Chelsea would return to China next summer. "We have not finalized that plan." Does it remain a distinct possibility? "Well, we were here a couple of years ago and it was an exciting experience. And I'm pretty sure we will be back again fairly soon." 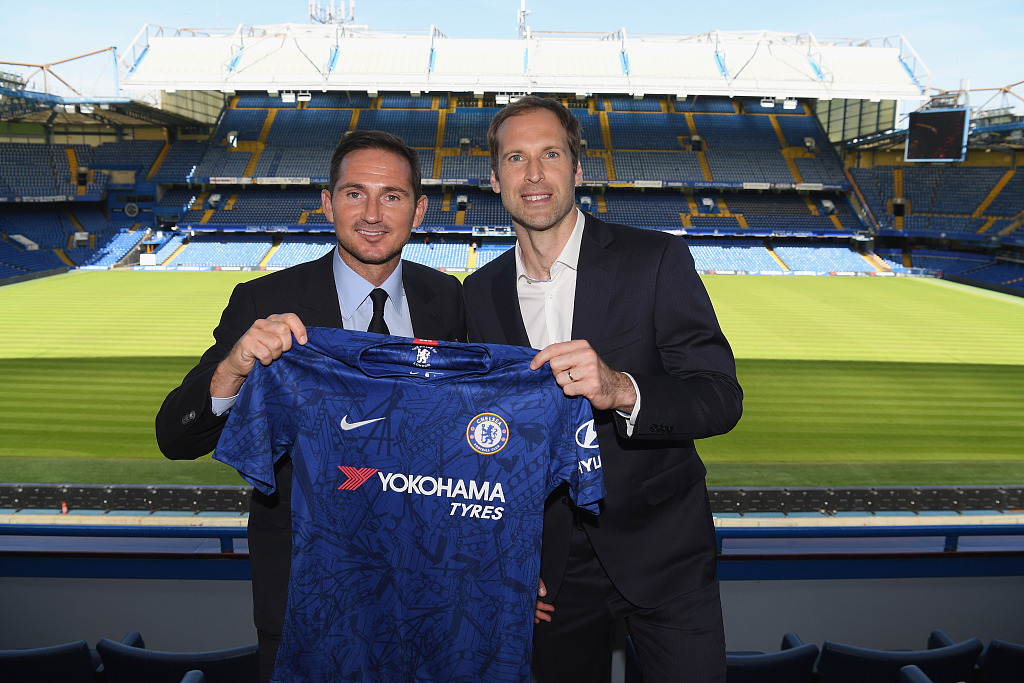 The Chelsea brand is nostalgic for an immense number of Chinese fans. Many got hooked on the club when a handsome, dark-haired Jose Mourinho took the football world by storm by building a relentless winning machine featuring charismatic stars such as Didier Drogba, Petr Cech, John Terry and Frank Lampard more than a decade ago.

Though the old guard from Chelsea's golden age has been consigned to history, some legends rekindled their earlier romance with the London club this summer. Lampard completed his fairytale return to Stamford Bridge as the new manager while Cech was also welcomed back to Chelsea as technical and performance adviser.

After several years of surfing a wave of managerial instability, Chelsea will surely be hoping Lampard could reunite their disillusioned fan base. In truth, the Blues' all-time top goalscorer has already earned the admiration of fans as his new-look team continued their encouraging form with convincing victories over Barcelona and Reading last week.

Such elation and buoyancy contrasted with a few months ago when Maurizio Sarri could not even even crack a smile and struggled for acceptance among Chelsea fans. But now Sarri is gone, and a new Lampard-era has begun. 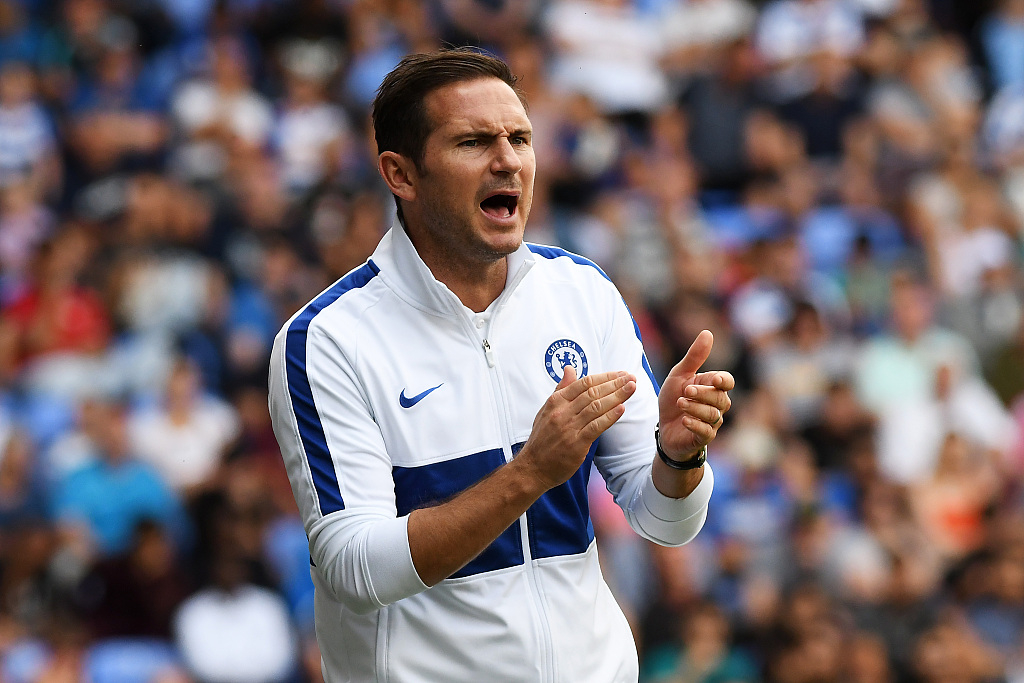 Frank Lampard barks orders to his Chelsea side from the touchline at Madejski Stadium, July 28, 2019. /VCG Photo

Frank Lampard barks orders to his Chelsea side from the touchline at Madejski Stadium, July 28, 2019. /VCG Photo

"Frank knows the club probably better than anyone else," Twelvetree explained. "He knows how the club works and how to be successful in the most competitive league in the world. Having someone with that kind of experience back at Chelsea as manager is hugely important."

"In the same vein, Petr is a fantastic professional and won everything with us. He is exceptionally dedicated and knows the club through and through. We always want him to return and when the opportunity came, we brought him back."

"I sensed that he's someone that's gonna be important for us to go forward. And he is very engaged with what we are doing in commercial and marketing perspective, which is great because you obviously want that connection with a club legend." 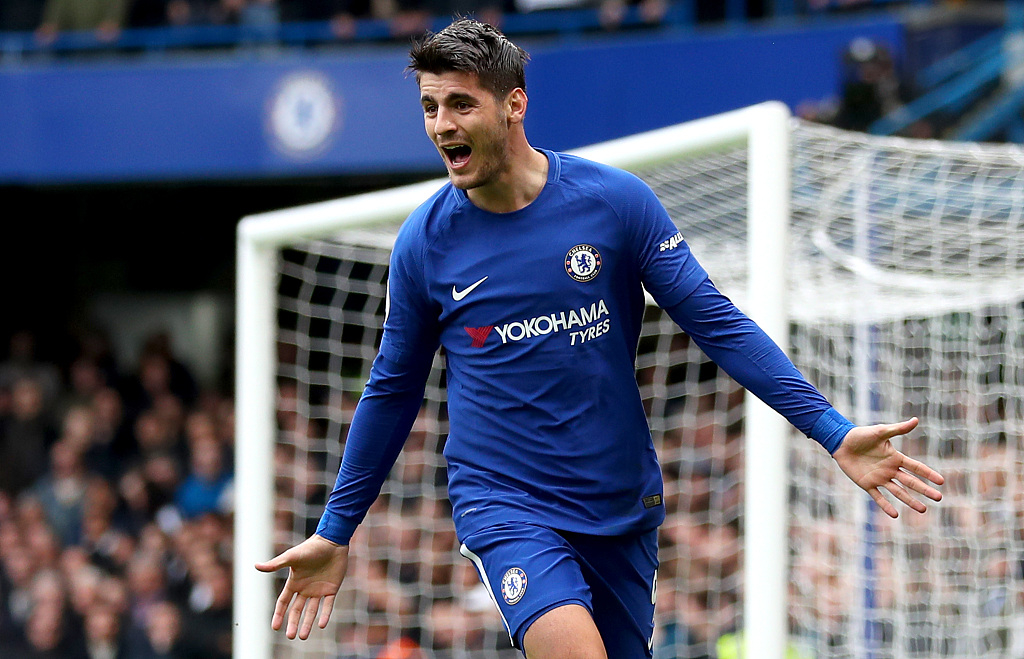 As the morning drifted past, Twelvetree talked passionately and as a father of a 10-year-old daughter, he brought an amusing perspective to his late-blooming football club career.

"My family has always been a sporting family. In fact I've got an uncle who used to play professional football long time ago. My home team is Peterborough United before I joined the club but I watched Chelsea a lot. My daughter also loves to have a kick-about on the pitch. You could say she is a proper Chelsea fan and she has even gone as far as to name one of her dogs [Alvaro] Morata.

"When Morata joined Atletico Madrid on a permanent deal from Chelsea earlier this month, she asked me a question." Twelvetree let his words hang in the air. And then, after a short pause, he continued, barely suppressing a giggle. "Dad, can I support Atletico?"