Natural Phenomena: landslides, when the earth engulfs itself
By Xing Fangyu On July 23, in Pingdi Village of Liupanshui City, southwest China‘s Guizhou Province, the green mountain was slashed by a "wave" of rocks and earth moving down the slope. This natural hazard called landslide swallowed buildings and lives.

What is a landslide?

A landslide is any type of downslope movement of soil, rock or debris under the direct influence of gravity. The term "landslide" includes five modes of slope movement: falls, topples, slides, spreads, and flows. It can occur when a slope becomes unstable. The study "Global fatal landslide occurrence from 2004 to 2016" by Melanie J. Froude and David N. Petley says that the spatial distribution of landslides is heterogeneous, but Asia represents the dominant geographical area.

Landslides are driven by tectonic, climate and human activities. They can be secondary hazards triggered by another disaster, like earthquakes, volcanic activity, rainfall, and snowmelt. Human activities such as deforestation, cultivation, blasting, and mining can also lead to landslides.

The destructive power of a landslide is tremendous. The rapidly moving water and earth can engulf roads and buildings and take lives. Despite the rescue teams' efforts day and night that landslide occurred in Pingdi Village killed more than 40 people and buried 21 houses. How to minimize damages?

First, you need to be aware of the areas that are more likely to experience landslides. Geographically, places with steep slopes or at the bottom of slopes or canyons, or channels along a stream or rivers are not ideal places. Areas with less soil stabilization due to destroyed vegetation or landslides that occurred before are also dangerous.

Similar to the safe tips for flooding, keep an eye on warning systems and prepare an emergency plan. Most landslides with heavy casualties happen at night when people are at home, reminding us of sharp vigilance during extreme weather and keeping alert for rumbling sounds that could be an approaching landslide.

Flooding may occur after a landslide creates a dammed lake, so stay on alert until authorities announce safety. 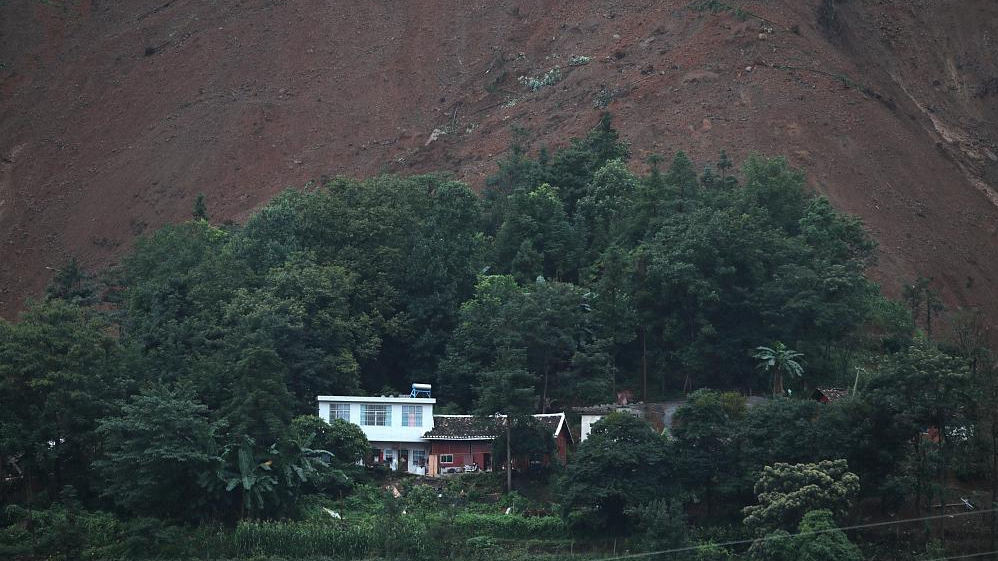 A lucky house survive from the landslide in Pingdi Village. /VCG Photo

A lucky house survive from the landslide in Pingdi Village. /VCG Photo

Natural phenomena is a new series that takes you to an unknown world of nature phenomena. From natural disasters such as earthquakes and volcanic eruptions to spectacles like aurora and mirage, let's dig into the secret of our planet.