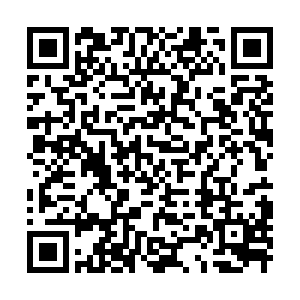 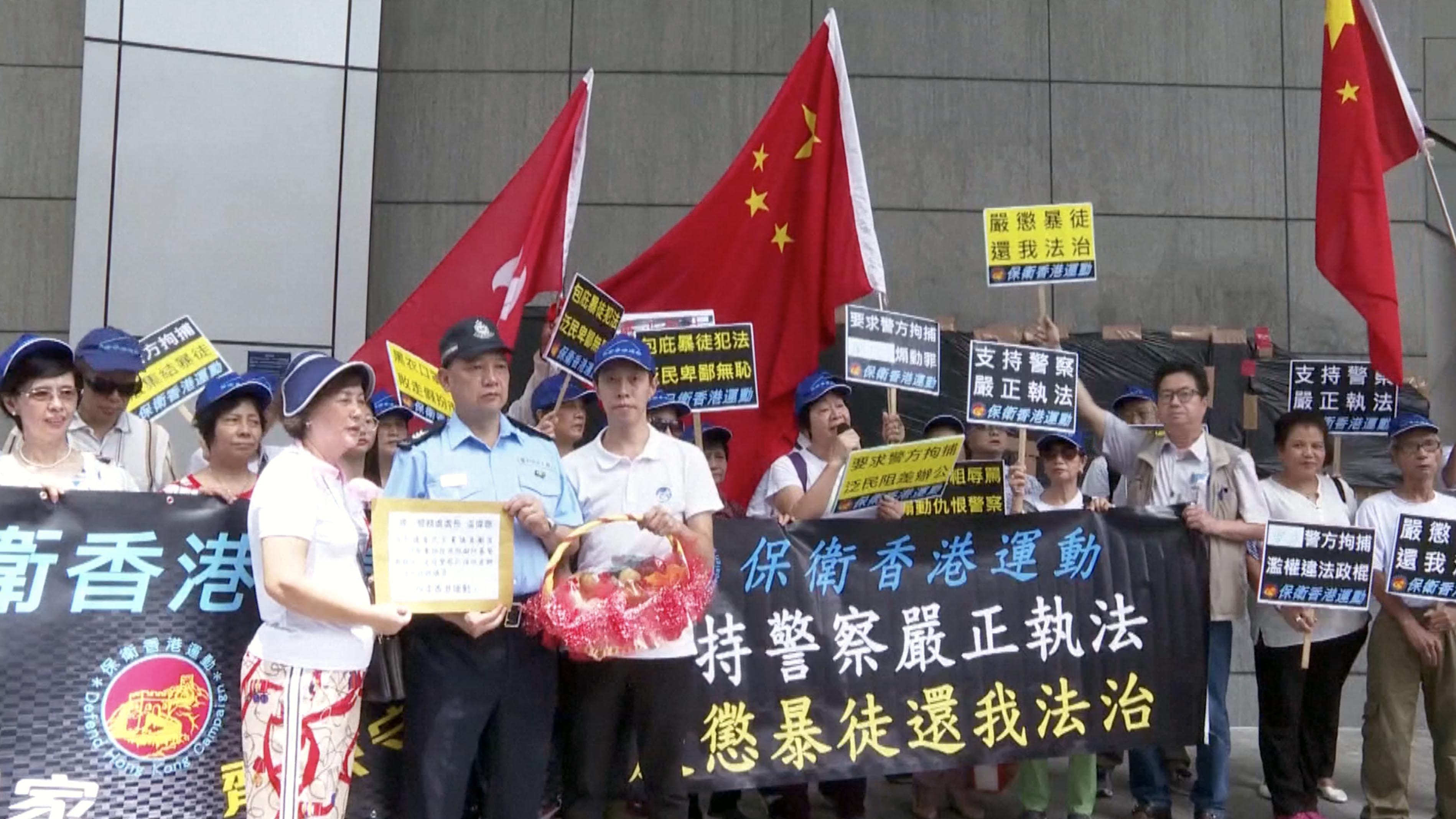 Editor's Note: Liu Lulu is an opinion editor with CGTN Digital. The article reflects the author's opinions, and not necessarily the views of CGTN.

Days after assaulting the Liaison Office of the Central People's Government with eggs and graffiti, the radical activists in Hong Kong hurled a Chinese national flag into Victoria Harbor on Saturday night.

This is a blatant challenge against the authority of the central government and the principle of "One Country, Two Systems." It is shocking and heartbreaking that China's national flag was wantonly insulted in Hong Kong, one of the most democratic cities in the world. These mobs must be held liable for their heinous acts.

The National Flag and National Emblem Ordinance regulates that "A person who desecrates the national flag or national emblem by publicly and wilfully burning, mutilating, scrawling on, defiling or trampling on it commits an offense and is liable for a conviction to a fine of level 5 and three years imprisonment." An arrest may be the best approach to make these mobs stop their shameless behavior.

Since June, these so-called activists have colluded exterior forces to disturb Hong Kong. Thanks to their "relentless efforts," previous peaceful protests against a controversial fugitive bill are gradually turning into violence. Clashes between activists and the police erupted one after another; Petrol bombs and potassium nitrate that are used to make gunpowder were discovered in Tin Shui Wai; Dozens of people were injured in the Yuen Long violence.

The mobs defend their heinous acts as fights for democracy and the autonomy of Hong Kong's judicial system. This is a bald lie. These so-called activists are using the fugitive bill as a tool. They are not fighting for democracy but fighting against the central government under the cloak of democracy. 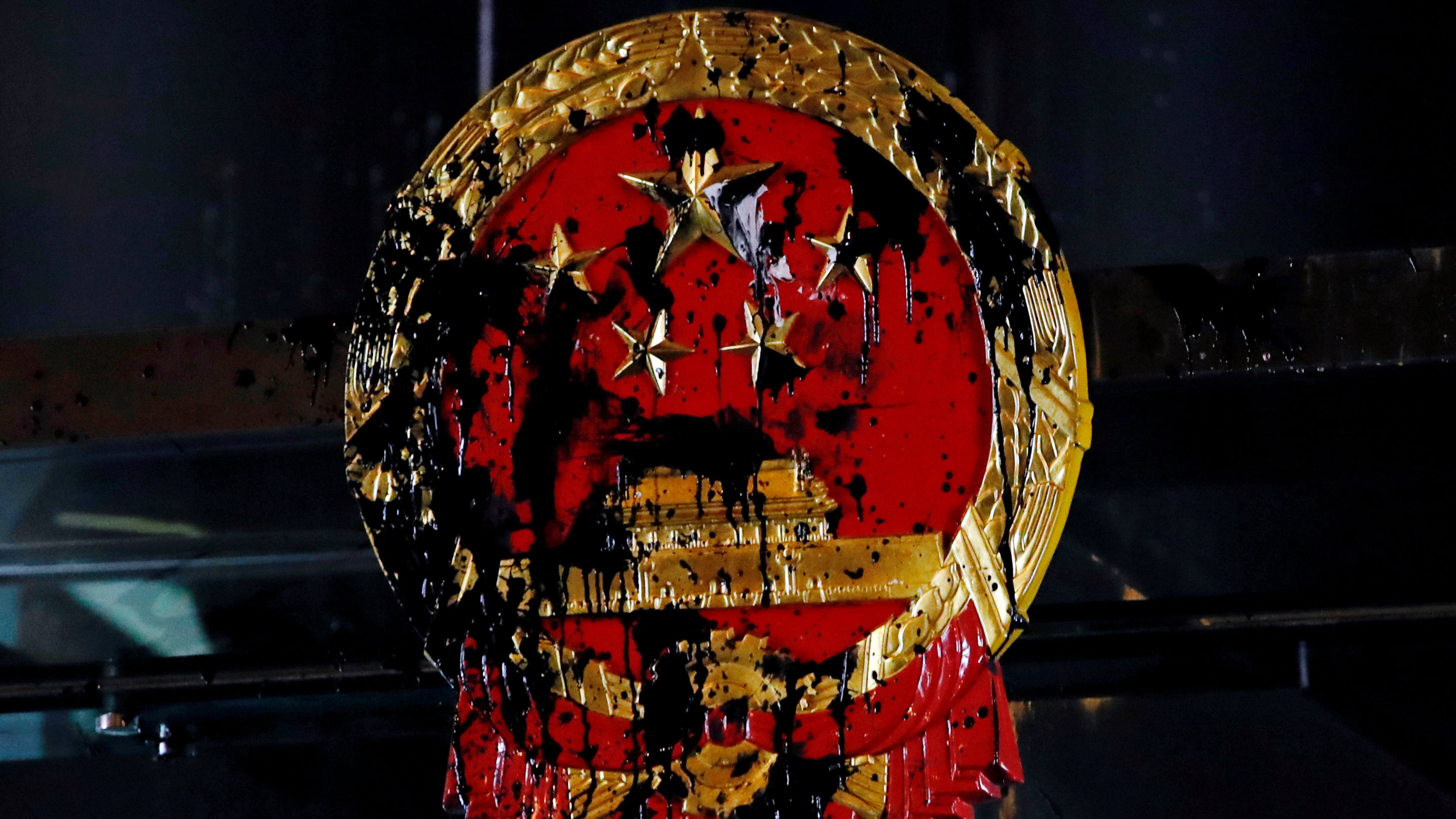 Protesters stain the Chinese national emblem at the Liaison Office of the Central People's Government in the HKSAR, July 21, 2019. /Reuters Photo

Protesters stain the Chinese national emblem at the Liaison Office of the Central People's Government in the HKSAR, July 21, 2019. /Reuters Photo

This is not a groundless accusation. WikiLeaks revealed that the U.S. Congress-funded National Endowment for Democracy (NED) provided financial support for Hong Kong's 2014 "Occupy Central" movement. "NED has been funding 'democracy-promotion' programs in Hong Kong for about two decades with grants totaling several million dollars," the VOA reported, quoting Louisa Greve, NED's vice president of programs for Asia, the Middle East and North Africa, as saying.

There are reports about financial connections between the NED and Hong Kong Human Rights Monitor, a major local force behind the Hong Kong violence. The NED is notorious for its role in a number of regime-change operations. Skilled at manipulating local opposition forces to spread rumors and fear, the NED's ultimate purpose is believed to topple local governments.

Holding high the banner of democracy, the U.S. has dragged Afghanistan, Iraq, Libya, Ukraine, Syria and a slew of other countries and regions into an abyss of misery. This time, Washington has diverted its attention to Hong Kong.

"Judging from the preparation, targeting strategies, riot tactics and abundance of supplies, it takes naivety akin to simplemindedness to truly believe these activities [in Hong Kong] are not being carefully orchestrated," China Daily concluded in its editorial.

Foreign meddling is fueling previous peaceful protests into violence, but violence is not what ordinary Hong Kong people hope to see. After the national flag was tossed into the Harbor, Hong Kong patriots voluntarily organized a flag-raising ceremony on Sunday morning. Hundreds of thousands of ordinary Hong Kong citizens took to the street to voice their opposition to violence and support for the police in July.

Hong Kong citizens have the capability to distinguish between evil schemes and China's core interests, and the wisdom not to be used as pawns by exterior forces. The central government will stand firmly behind Hong Kong. A prosperous and democratic Hong Kong is a joint pursuit of local people and the mainland.