China on Tuesday urged India to take an independent decision on Huawei's participation in the South Asian country's 5G build up amid reports in the Western media suggesting Beijing and New Delhi are having some trouble in negotiations on the matter.

"Huawei has long been doing business in India and we all bear witness to its contributions to India's economic and social development," Chinese Foreign Ministry Spokesperson Hua Chunying said in a statement in response to a question about whether Beijing is concerned that Huawei could be prevented from entering the 5G race in India under pressure from the U.S., which is running a global campaign against the Chinese telecom giant. 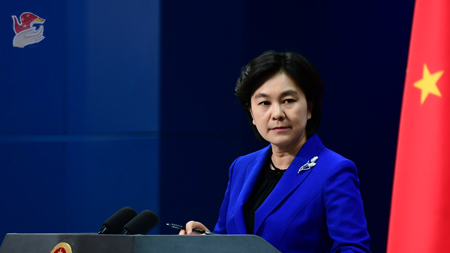 The Chinese reaction came following a Reuters report on Tuesday, picked up by several other media outlets, that claimed Beijing has warned New Delhi there could be consequences for Indian firms operating in China if India decides to block Huawei Technologies from doing business in the country.

The report quoted two sources "privy to internal discussions in New Delhi" saying that India's Ambassador to Beijing, Vikram Misri, was called to the Chinese Foreign Ministry on July 10 to hear China's concerns about the U.S. campaign to keep Huawei out of 5G mobile infrastructure worldwide.

During the meeting, Chinese officials said there could be "reverse sanctions" on Indian firms engaged in business in China should India block Huawei because of pressure from Washington, one of the sources said, citing a readout of the ambassador's meeting, according to the report.

The U.S. has banned Huawei, the global leader in telecom equipment and the No. 2 smartphone maker, over concerns of security, and has been putting pressure on other countries, including India, to restrict the operations of the Chinese telecom firm.

India is expected to hold trials for installing a next-generation 5G cellular network in coming months and so far hasn't succumbed to the U.S. demand.

On the contrary, the Indian telecom minister in a statement to the parliament revealed the pressure Washington is putting on New Delhi.

"Any Indian company which will act as a supplier of U.S.-origin equipment, software, technology to Huawei and its affiliates in entity list could be subject to penal action/sanction under U.S. regulations," Ravi Shankar Prasad said in a written reply to the Lok Sabha, the lower house of the Indian parliament.

The Indian minister also revealed that Huawei is still in the race for 5G trials in India. "So far six proposals have been received which include proposals from China's ZTE and Huawei. Any field trial in respect of 5G is to be carried out only through licensed Telecom Service Providers in a restrictive, limited geographical area and for specific use case," Prasad said.

Huawei has teamed up with Vodafone Idea to participate in 5G trials in India.

Prasad told the parliament that a committee under Principal Scientific Adviser has been constituted to give recommendations on various issues, including security, relating to 5G technology trials in India.

The committee has found no evidence to suggest that Huawei has used "back-door" programs or malware to collect data in its current operations in India, according to a Reuters report that cited officials from the telecom ministry without naming them.

India's Home Ministry, which is responsible for the security of the infrastructure, had issued no directive to curtail Huawei's entry, the telecoms official said. "We can't simply reject them just because they are Chinese," said the official.

"We look at India strategically and now intend to grow our presence through launch of devices in the mid-and-premium-end of the market. Yes, definitely we plan to go for local manufacturing. We plan to do this in partnership with our manufacturing partner Flex that has a factor in Chennai," Huawei's Global Vice-President Jim Xu was quoted as saying by China's Xinhua News Agency.

Huawei already has a presence in India through its sub-brand "Honor" which is sold through online channels.