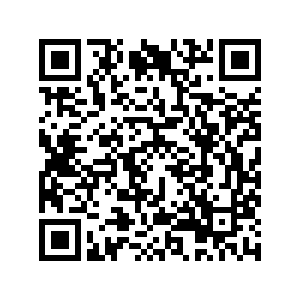 Editor's note: This is an edited translation that was first published by Xinhua News on August 4, 2019. The article does not necessarily reflect the views of CGTN.

A general strike sank the city of Hong Kong into chaos on Monday, with shops closed and transportation network shut down. The city was rife with complaints from residents for the inconvenience brought by the general strike, and rocked by confrontations between police who want to maintain order and protesters who left trails of destruction.

In Hong Kong, more than 5.8 million passenger trips are taken via MTR trains. But rush hour traffic was disrupted by protestors who intentionally blocked trains from leaving. Major subway lines were suspended or delayed as a result.

At seven in the morning, as a group of protesters were trying to stop the subway train door from closing, a 50-year-old man got into an intense argument with the protesters. He pointed at a protester and said, "Don't do this. People have to go to work."

As the clash ensued, a pregnant woman, accompanied by her husband, was escorted from the train as she was experiencing discomfort. Her husband yelled at the protesters and said, "call the ambulance."

On the street near Tamar Park, some protestors set up barricades to bar cars from entering. A taxi rammed through the makeshift roadblock, injuring those who failed to take shelters in time. 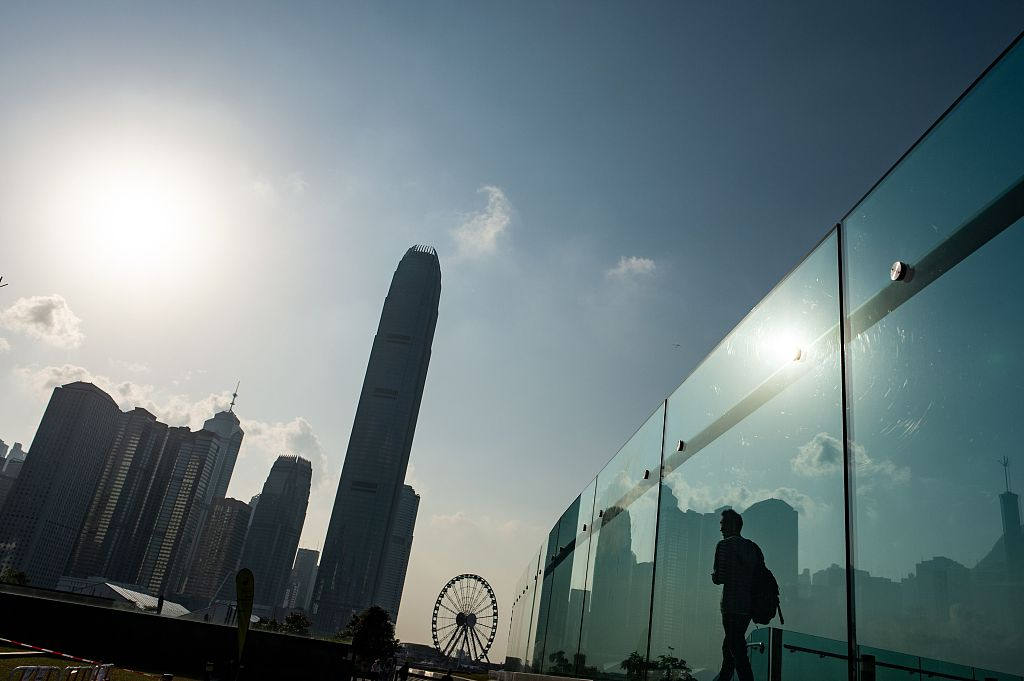 A man walks past Tamar Park in Admiralty with the skyline of Hong Kong's financial district, April 9, 2018. /VCG Photo

A man walks past Tamar Park in Admiralty with the skyline of Hong Kong's financial district, April 9, 2018. /VCG Photo

According to the Airport Authority Hong Kong, by 5 pm, more than 200 flights were cancelled at Hong Kong International Airport.

34-year-old Wu had a flight scheduled for Japan in the morning but was told that his flight was cancelled. He told reporters that some people, in order to fight for so-called democracy, were violating the democratic rights of Hong Kong residents – which was in no way democratic.

Those who were blocking the traffic wish that others could join the strike, but in order to achieve that goal, everyone's life had to be disrupted, he added.

Disruption to the traffic dealt a heavy blow to the service sector. On the once bustling Hennessy Road, several jewelry stores, clothing stores and local diners were still closed in late morning. A pharmacy manager told reporters that many stores were closed because their owners could not arrive on time since the transport system was in disarray.

Kwun Tong, the once heavily populated area in Hong Kong, saw much less crowd during lunch time. Office workers nearby used to come to the area for lunch but on Monday, "there were less people, almost like during the weekends," said a food stall owner. 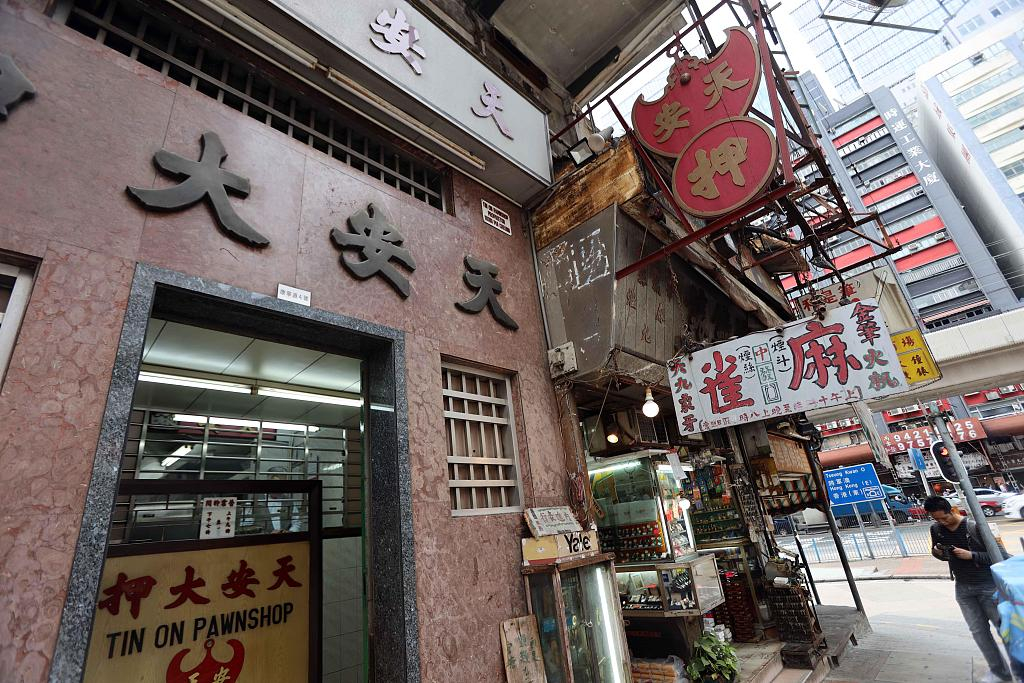 Zhang, who runs a desert spot told reporters that it usually took her 30 minutes to go to work, but today she spent nearly three hours on the road. Frequent protests forced her to cut down her store's hours to less than six hours.

"Disorder led to fear. For us who run small business, we only want stability," she said.

Tourism and retail industry also felt the pinch. Since June, Hong Kong was embroiled in violent confrontations, leading to a general sense of fear among travelers for their personal safety. Many delayed or cancelled their travel plan to Hong Kong as a result.

Retail sales data for June dropped 6.7 percent compared to a year earlier. The Hong Kong Retail Management Association said that most of its members experienced a single-to-double-digit drop in sales revenue from June to the first week of July. 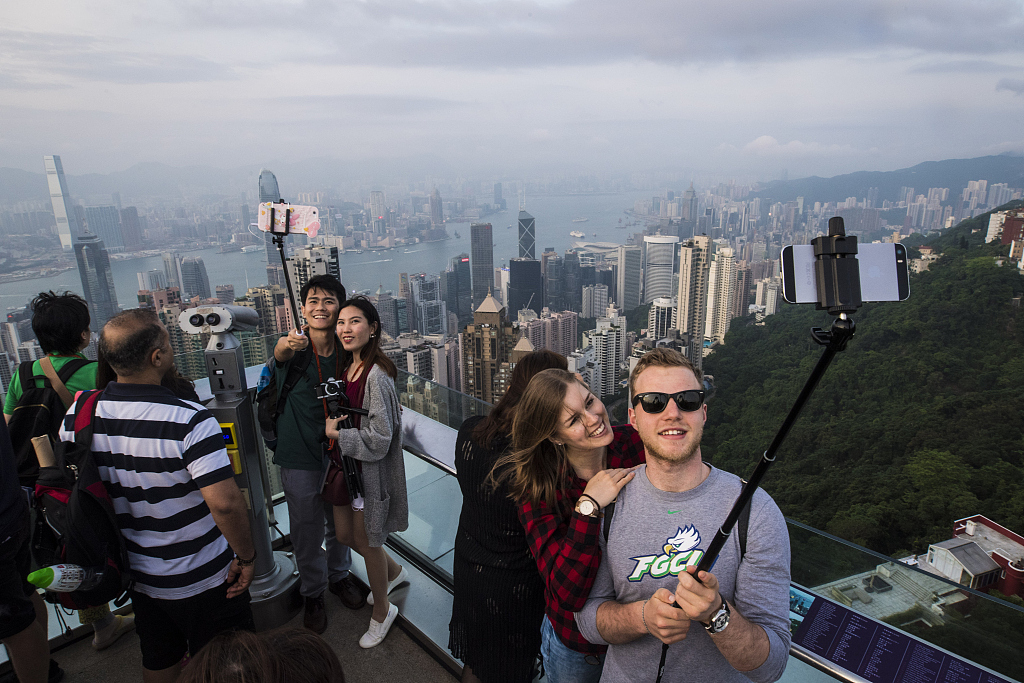 Tourists take photos on the top deck of the Peak Tower near the summit of Victoria Peak on Hong Kong Island. /VCG Photo

Tourists take photos on the top deck of the Peak Tower near the summit of Victoria Peak on Hong Kong Island. /VCG Photo

Tourist visits to Hong Kong declined to 5.14 million in June, a drop of 770,000 visits compared with May, while occupancy rate in hotels dropped three percent since June.

"In the past two months, the order and rule of law in Hong Kong have been damaged tremendously. There are already so much chaos and we cannot afford to have more clashes," said Wang who works for a bank in Hong Kong.

Hong Kong is the home for all Hong Kong residents, he added, expressing his hope that order can quickly be restored in his homeland.