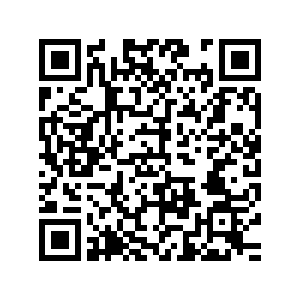 Editor's note: Muttaquina Hossain is Assistant Scientist in the Nutrition and Clinical Services Division at the International Centre for Diarrhoeal Disease Research, Bangladesh. The article reflects the author's opinions, and not necessarily the views of CGTN.

In public health, discussions relating to women typically focus on maternal mortality, malnutrition, and more recently, sexual and reproductive health. But one facet of malnutrition – and a major killer of women – is often ignored: anemia.

Anemia is the world's most common nutritional disorder, affecting more than 1.6 billion people. Broadly defined as an excessively low concentration of hemoglobin (an iron-rich protein that carries oxygen to tissues throughout the body) in the blood, anemia occurs either when there are too few red blood cells or when their oxygen-carrying capacity is compromised. It is caused by a deficiency in essential nutrients, most often iron, but also folic acid, vitamin B12, or vitamin A.

Anemia often goes undiagnosed, particularly in its earlier stages, but its consequences are serious. Iron-deficiency anemia alone – representing about half of all cases – causes about a million deaths per year, some three-quarters of which occur in Africa and Southeast Asia. Moreover, anemia contributes significantly to maternal and perinatal mortality: in Asia, it is the second leading cause of maternal death. About one-third of all anemia-related maternal deaths occur in South Asian countries. 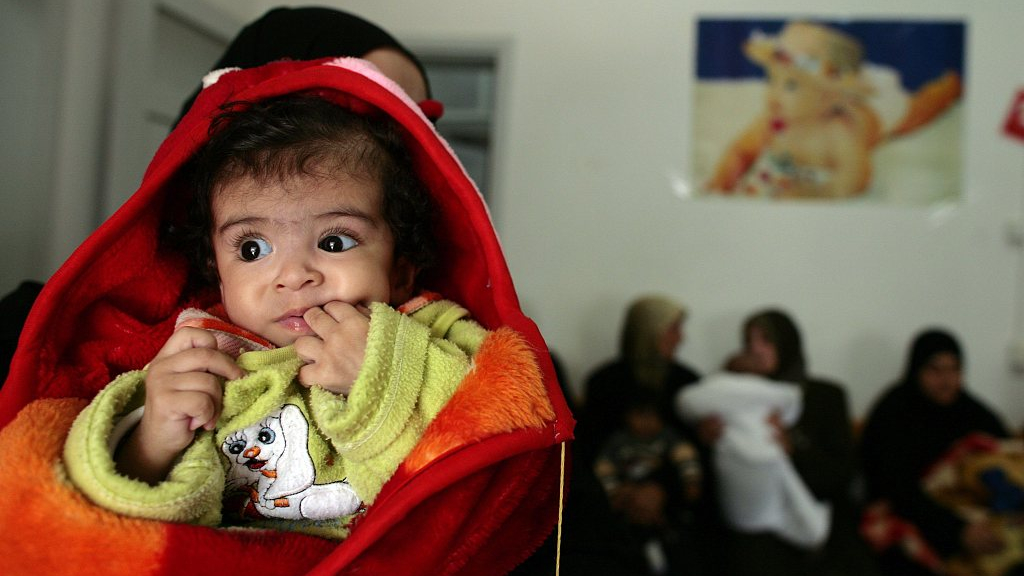 A baby girl at a clinic for anemia and malnutrition treatment in Gaza, Palestine, April 6, 2006. /VCG Photo

A baby girl at a clinic for anemia and malnutrition treatment in Gaza, Palestine, April 6, 2006. /VCG Photo

To spur progress in addressing this pervasive and deadly disorder, in 2012 the World Health Assembly endorsed a comprehensive implementation plan on maternal, infant, and early-childhood nutrition, which included the target of reducing anemia by 50 percent in reproductive-age women by 2025. To that end, the World Health Organization recommends strategies such as improving dietary diversity; fortifying foods with iron, folic acid, and other micronutrients; and distributing iron supplements.

That is a good start. The question is how to implement these recommendations, particularly in developing countries.

In a country like Bangladesh, daily consumption of micronutrient-rich foods – such as red meat, green leafy vegetables, and some nuts or seeds – is often not an option, owing to household financial constraints. Even if it were, lack of education about nutrition would hamper the necessary behavioral change.

But employers – especially those that provide lunch to workers – have the power to boost micronutrient consumption significantly among their labor forces, thereby reducing the incidence of anemia. That is the conclusion of a recent study conducted by my colleagues and I at the International Centre for Diarrhoeal Disease Research, Bangladesh.

The first set of women received a nutritionally enhanced lunch (with fortified rice) every day, one IFA supplement each week, and an "enhanced" BCC module (including information on anemia and dietary diversity) each month. The second set received their usual lunch, no supplements, and a "regular" BCC module (including information about nutrition, but not specifically about anemia or dietary diversity). The third set of women – working at a factory with no lunch program – received twice-weekly IFA supplements (daily for pregnant women) and the enhanced BCC module, whereas the fourth received no lunch or supplements, and the regular BCC module. 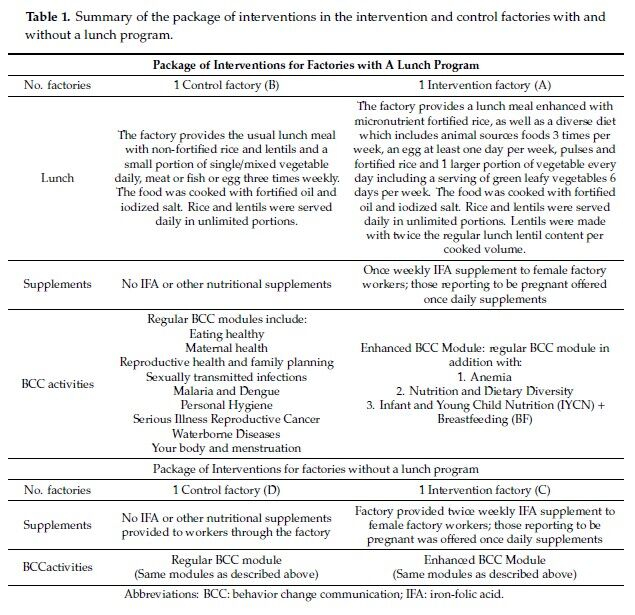 Summary of the package of interventions in the intervention and control factories with and without a lunch program. /Project Syndicate

Summary of the package of interventions in the intervention and control factories with and without a lunch program. /Project Syndicate

The results were promising, to say the least. The implementation of a full nutrition package in the first factory reduced the prevalence of anemia by 32 percent. Even just the inclusion of IFA supplements and enhanced BCC sessions (in the third factory) brought a 12 percent decline. Hemoglobin concentrations increased in both of these groups.

This reinforces the findings of separate studies, in which fortified foods caused the anemia rate among participants to drop by 46 percent over 6-11 months. Intermittent doses of IFA supplements reduced the prevalence of anemia in menstruating women by 27 percent.

In the International Centre for Diarrhoeal Disease Research, Bangladesh study, women from all four factories also reported a significant increase in knowledge of the main food groups, iron-containing foods, and the benefits of different vitamins and minerals as a result of the BCC sessions. But the actual results – including the regularity with which IFA supplements were taken – varied depending on the information relayed. Among the second set of women, who received the regular BCC module and no other interventions, anemia actually increased by 6 percent. This indicates that dietary and nutritional adjustments – not social or demographic factors – make all the difference.

If the clinical evidence is not enough to convince companies to invest in combating anemia among their workers, perhaps the productivity benefits will be. In our study, provision of a nutritionally enhanced lunch was associated with an increase in productivity: participants in the first factory were able to work more hours, and there were significantly fewer reports of common colds, urinary tract infections, and joint pain.

Nonetheless, we cannot count on companies to make the needed changes themselves. That is why the International Centre for Diarrhoeal Disease Research, Bangladesh plans to engage Bangladeshi policymakers and other stakeholders who can effectively advocate for a comprehensive nutritional program to be introduced at all garment factories in Bangladesh.

We also plan to test the same packages in different settings – such as in schools or among domestic workers – in the hope that successful strategies can be rolled out more widely, especially in women-dominated workplaces. Such initiatives can serve as a model for other developing countries, where anemia continues to damage – and even end – women's lives.