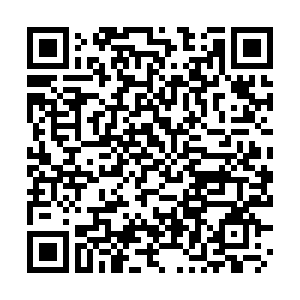 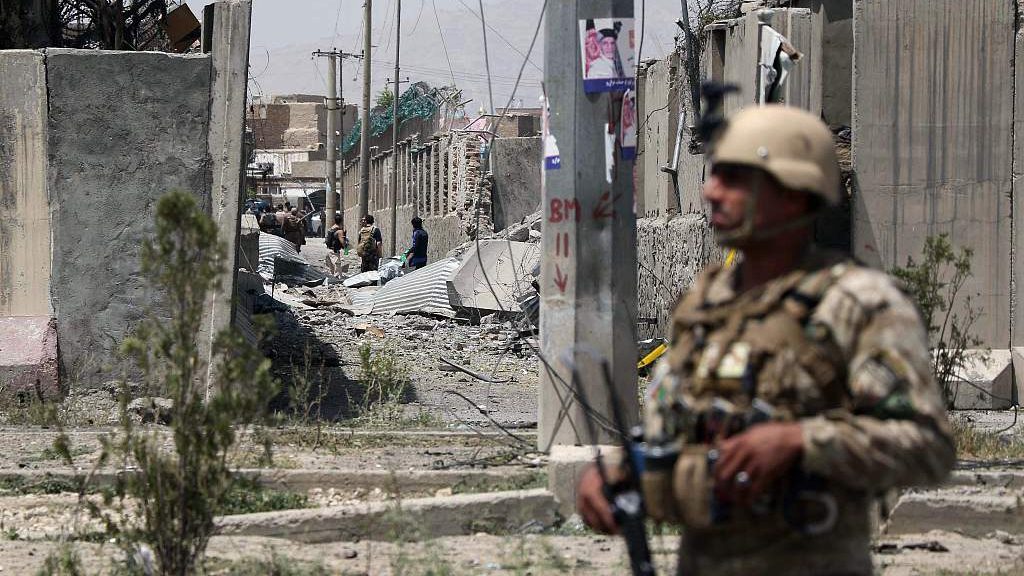 The site of a Taliban car bomb detonated at the entrance of a police station in Kabul, August 7, 2019. /VCG Photo

The site of a Taliban car bomb detonated at the entrance of a police station in Kabul, August 7, 2019. /VCG Photo

A Taliban car bomb aimed at Afghan security forces ripped through a busy Kabul neighborhood on Wednesday, killing 14 people and wounding 145, most of them women, children and other civilians, shortly after the extremist group and the United States reported progress on negotiating an end to Afghanistan’s nearly 18-year war.

The bombing during morning rush hour was one of the worst attacks in Kabul this year, and it again raised fears among Afghans about what will happen once the estimated 20,000 U.S. and NATO troops in their country go home.

The explosives-packed car detonated at a security checkpoint outside police headquarters in a minority Shiite neighborhood in western Kabul, police spokesman Firdaus Faramarz said. The Taliban said they had targeted a recruitment center for security forces.

Ninety-two of the wounded were civilians, Deputy Interior Minister Khoshal Sadat told reporters. Four police officers were among those killed, he said.

The attack took place as many Kabul residents were preparing for the Muslim holiday Eid al-Adha, which begins Sunday. A large plume of smoke rose over the city. Some nearby buildings were left in rubble. Shopkeepers later swept up broken glass.

"I was having breakfast in a restaurant when the explosion happened," said Mohmmad Qasem. As windows shattered, he and others rushed into the busy street. 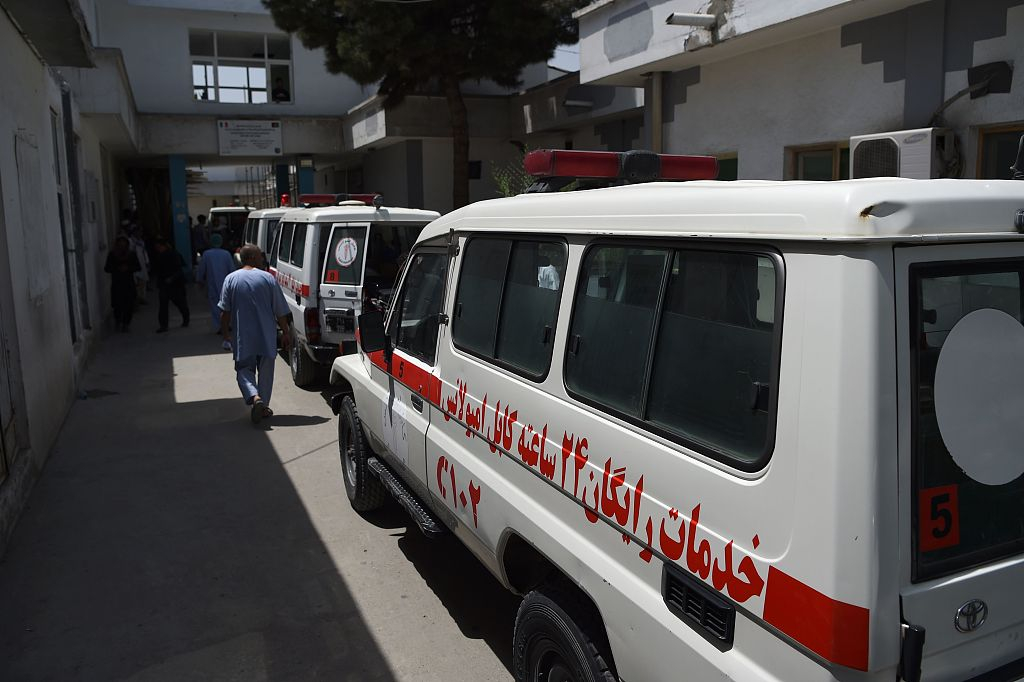 Ambulances by the police station in Kabul, August 7, 2019. /VCG Photo

Ambulances by the police station in Kabul, August 7, 2019. /VCG Photo

Even as the U.S.-Taliban peace talks continue and the Taliban say they will do more to protect civilians, a growing number of them are being killed. July saw the highest number of civilian casualties in a single month since 2017, with more than 1,500 killed or wounded as insurgent attacks spiked, the United Nations said earlier this month.

Any Taliban attack is a barrier to the peace process, presidential spokesman Sediq Seddiqi told reporters, vowing that “Afghan security forces are strong and can protect the Afghan population.”

President Ashraf Ghani’s government said such attacks apparently are meant to strengthen the Taliban position at the negotiating table but would not succeed.

On Tuesday the Taliban warned Afghans to boycott the September 28 presidential election and avoid campaign rallies which "could become potential targets." The vote has already been delayed for months over security and organizational concerns.

The Taliban have been staging near-daily attacks against Afghan forces across the country, saying the war will continue as long as U.S. and NATO forces are still in Afghanistan.

The Taliban now control roughly half of the country and are at their strongest since 2001, when the U.S.-led invasion toppled their government after it harbored al-Qaida leader Osama bin Laden. 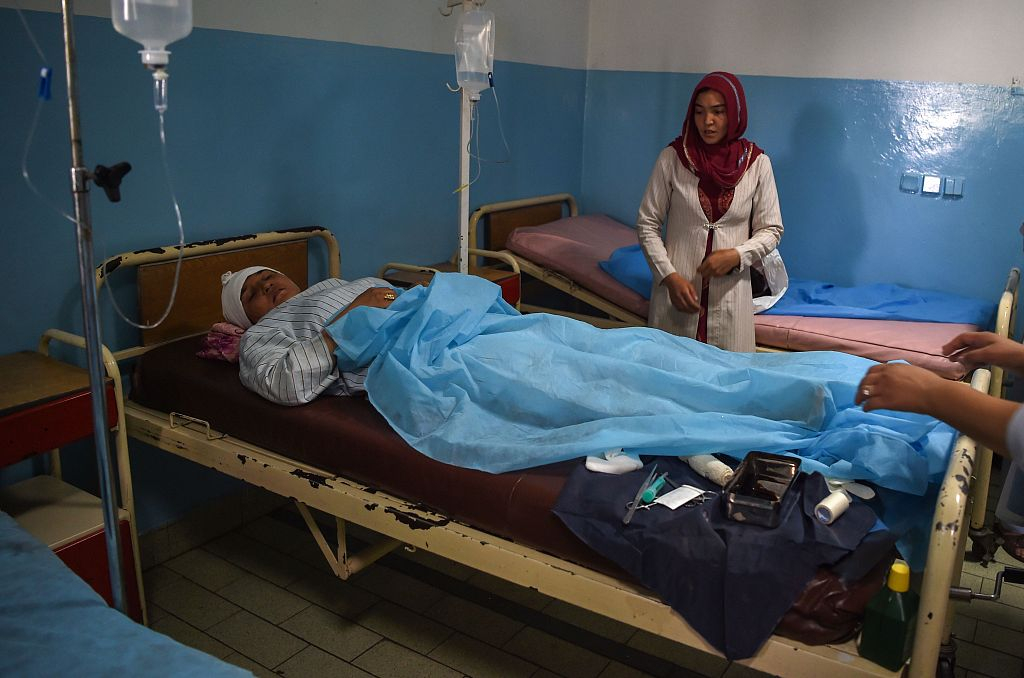 Another round of U.S.-Taliban talks continues this week in the Gulf Arab state of Qatar, where the insurgents maintain an office.

Zalmay Khalilzad, the U.S. envoy tasked with finding a peaceful resolution to America's longest war, this week reported "excellent progress" in the talks. A Taliban official said differences had been resolved over the withdrawal of U.S. troops from Afghanistan and Taliban guarantees that they will cut ties with other extremist groups. The U.S. wants to make sure that Afghanistan will not become a launching pad for attacks against it.

Khalilzad condemned Wednesday's bombing, saying in a Twitter post that "the focus should be on immediately reducing violence as we move closer to intra-Afghan negotiations that will produce a political roadmap and a permanent ceasefire."

Khalilzad has said he is hoping for a final agreement by September 1. But major challenges remain, as the Taliban refuse to negotiate with the Kabul government, dismissing it as a U.S. puppet.

More civilian casualties were reported on Wednesday in the western city of Herat, where a sticky bomb wounded at least eight people, including women and children, said Abdul Ahid Walizada, spokesman for the provincial police chief. 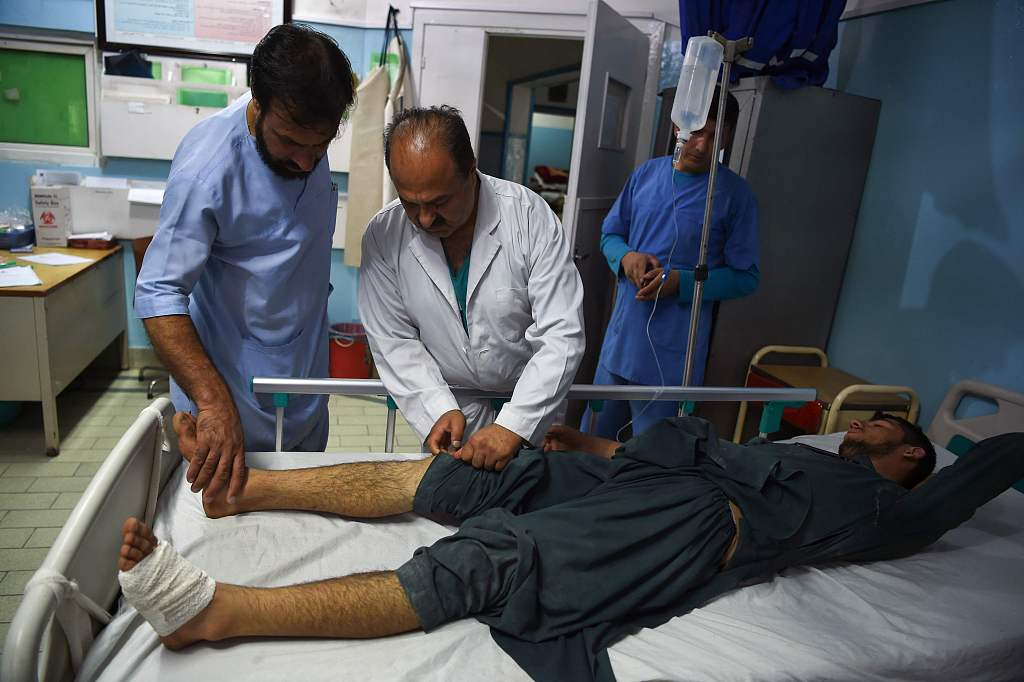 Another threat in Afghanistan is the local Islamic State group affiliate, which also has carried out several large-scale attacks in Kabul, frequently targeting minority Shiites.

On Wednesday, security officials said an overnight raid in eastern Kabul targeted three locations in residential areas from which the IS group has been launching attacks. Three members of the security forces and two of the extremists were killed, the officials said, and bomb-making materials were seized.

And in northern Baghlan province, a suicide bomber in a Humvee tried to attack an Afghan base but was killed by security forces, said Jawed Basharat, spokesman for the provincial police chief.