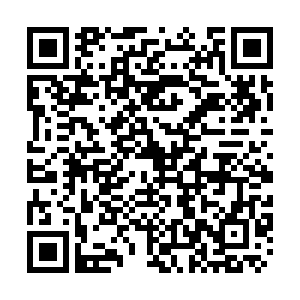 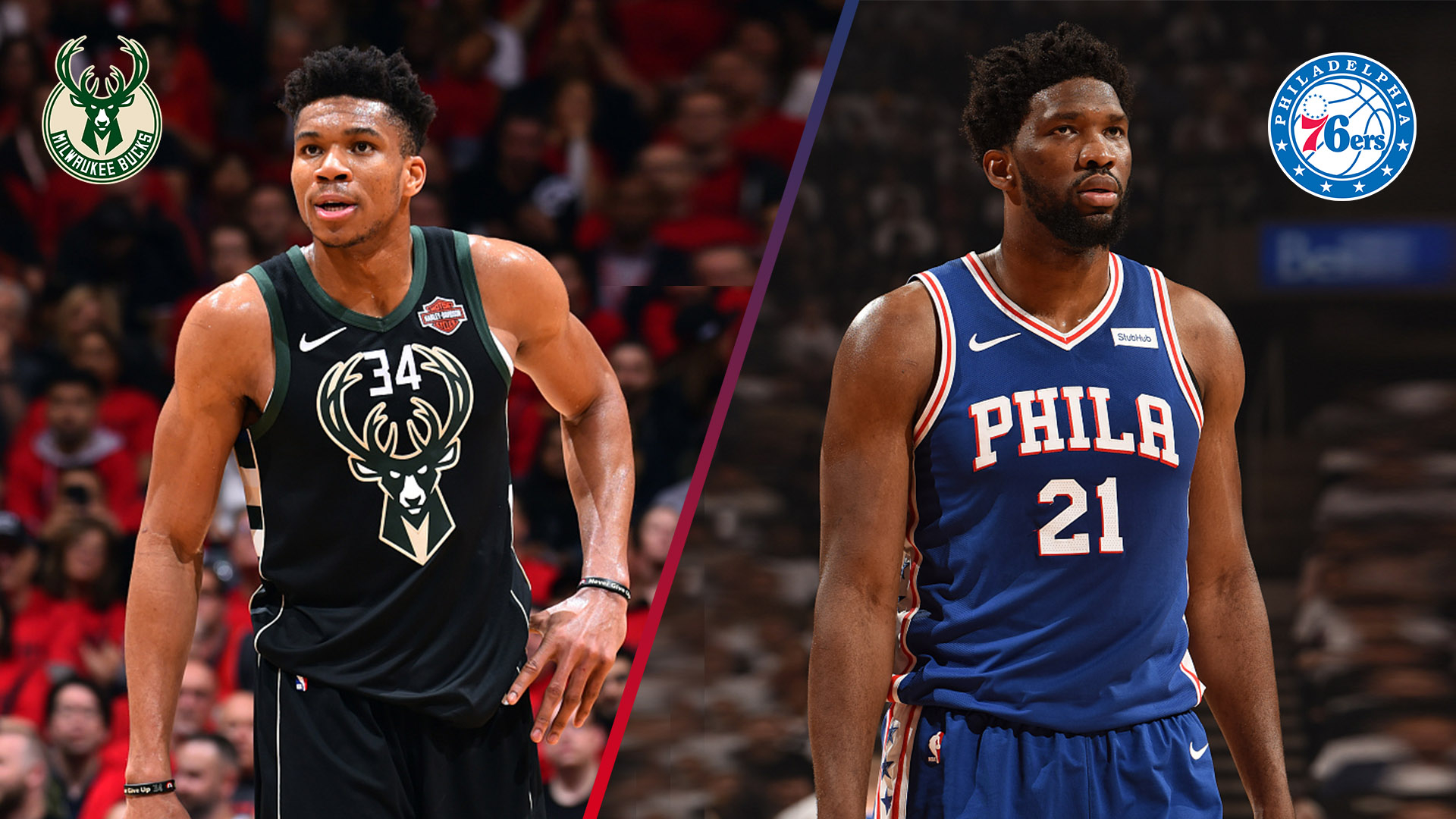 The 2019-20 NBA season will begin on October 22 and, like usual, the Eastern and the Western Conferences will be two different worlds. First, let's take a look at the East, starting with the two champion candidates, the Milwaukee Bucks and the Philadelphia 76ers. 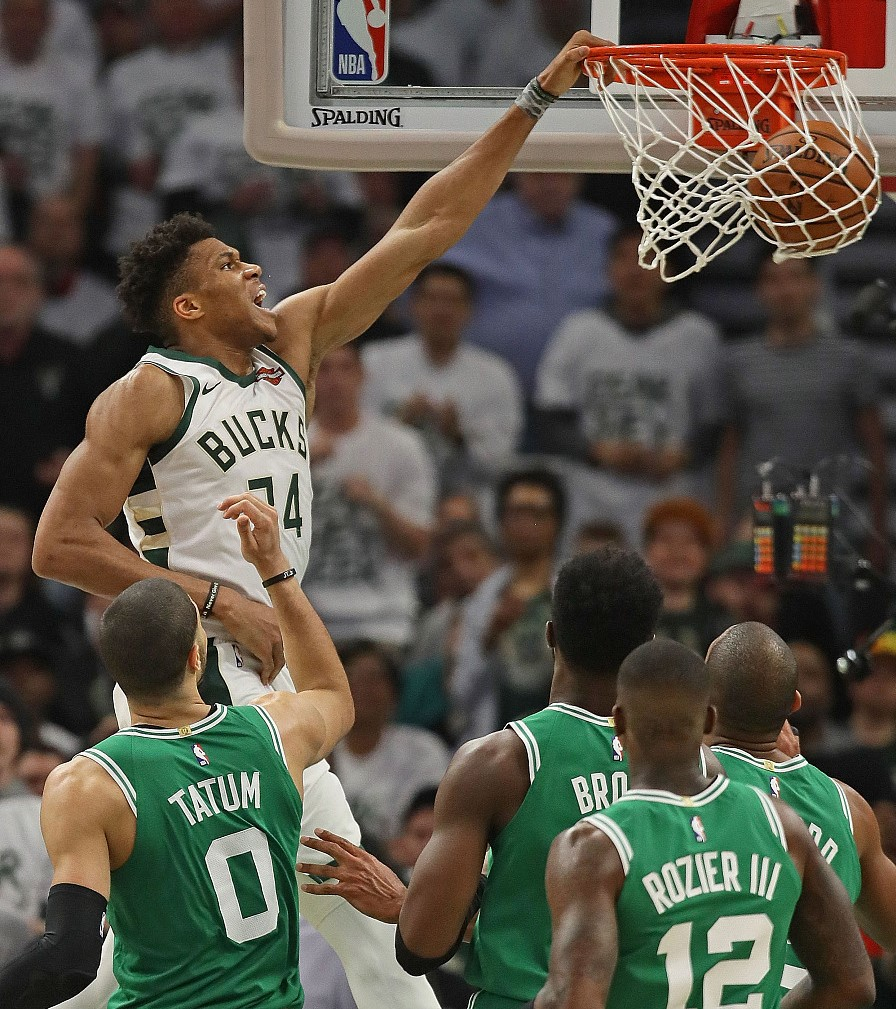 Giannis Antetokounmpo #34 of the Milwaukee Bucks dunks in front of four players of the Boston Celtics in Game 2 of the 2019 NBA Eastern Conference semifinals at the Fiserv Forum, April 30, 2019. /VCG Photo

Giannis Antetokounmpo #34 of the Milwaukee Bucks dunks in front of four players of the Boston Celtics in Game 2 of the 2019 NBA Eastern Conference semifinals at the Fiserv Forum, April 30, 2019. /VCG Photo

If we need to pick the most tenacious player of the league last season, Giannis Antetokounmpo should be the No. 1 choice of many people. The Greek Freak finished with a record of 279 dunks in the 2018-19 season, surpassing the previous one of 255 kept by Shaquille O'Neal, which makes it easier to understand how difficult it is to defend him.

It must drive most head coaches crazy trying to find out how to defend Antetokounmpo. He's too big, too strong and too quick for his size. His long limbs enable him to step across the defender with one or two big steps and put the ball into the basket from a height that his defender cannot reach. 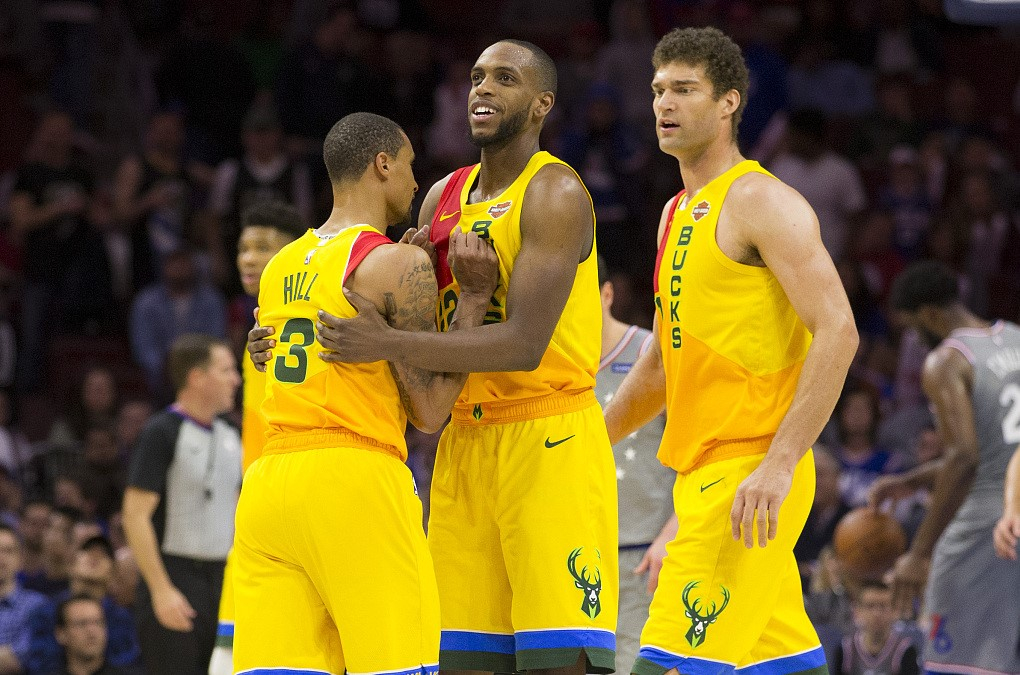 With such a powerful weapon in his unit, no wonder head coach Mike Budenholzer did not hurry to establish his system of cut, off-ball screen, and hand-off plays with Milwaukee. The team only needs to focus on dish-out plus fast break to win 60 games in the regular season.

By contrast, though the 76ers also have their own WMD in offense, Joel Embiid, who can be a headache for most teams thanks to his size, shooting range, driving and ability of earning fouls, putting a big man under the rim and double-teaming Embiid have proved effective in stopping him from scoring a lot of points. Meanwhile, as the 76ers lost J.J. Reddick this summer, the team won't have their signature Embiid-Reddick hand-off plays when the game is on the line.

76ers have better defense than Bucks 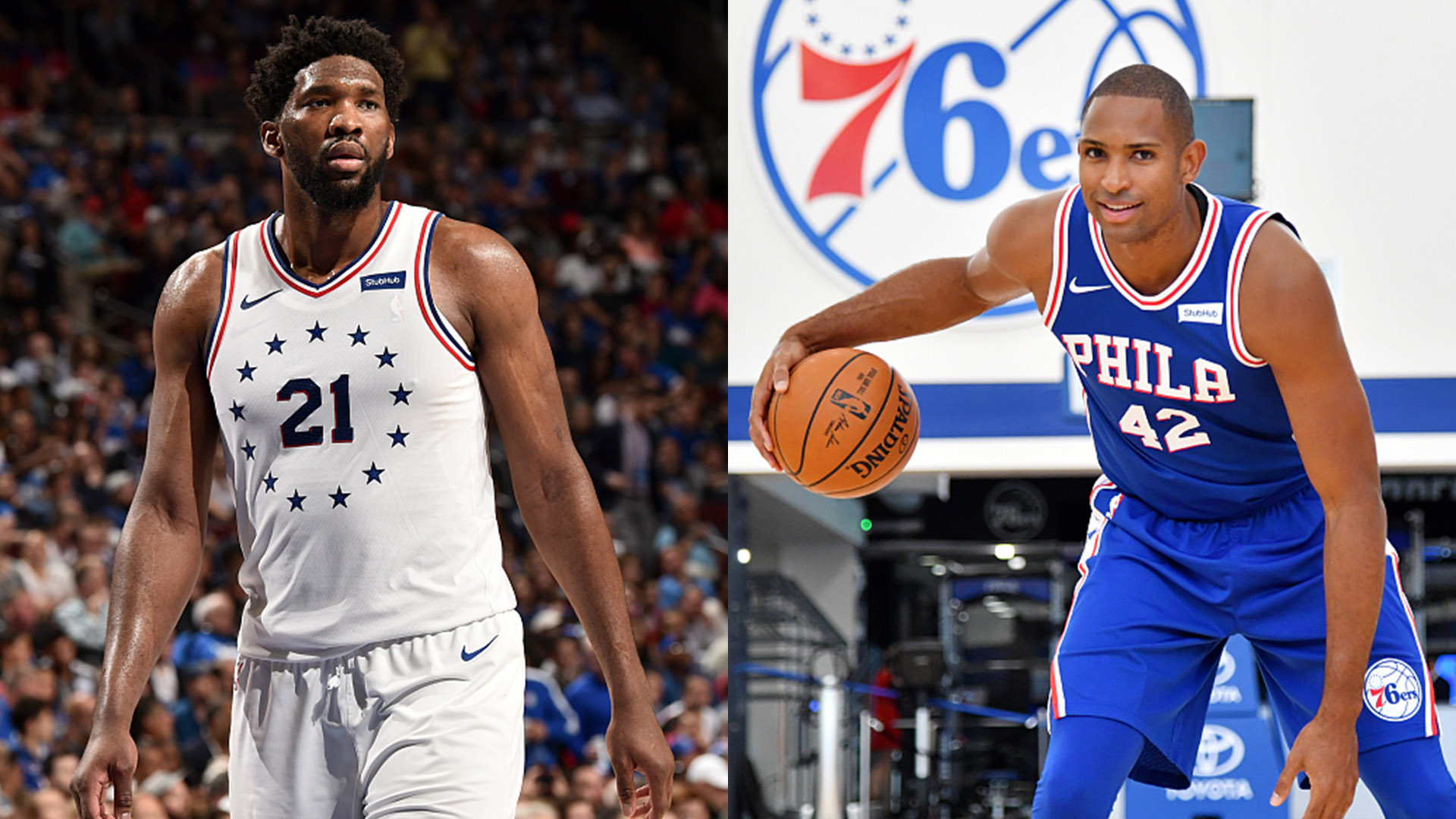 Philadelphia has its advantages in defense. The first one is still about Antetokounmpo. The solution the Toronto Raptors came up with to defend the Greek Freak in the playoffs goes as follows: have a big man remain in the paint (Marc Gasol), sending a forward with enough size and power (Kawhi Leonard) to slow Antetokounmpo down and put another player joining the big man to help defense.

Philadelphia is capable of replicating the above defense. They have Embiid to protect the rim, Ben Simmons to accompany Antetokounmpo and Josh Richardson to help defense. Second, landing Al Horford brought one of the few players who could stop the Greek Freak via one-on-one defense from time to time to Philadelphia. Therefore, it's safe to say that Philadelphia has the league's best resources to defend Antetokounmpo. 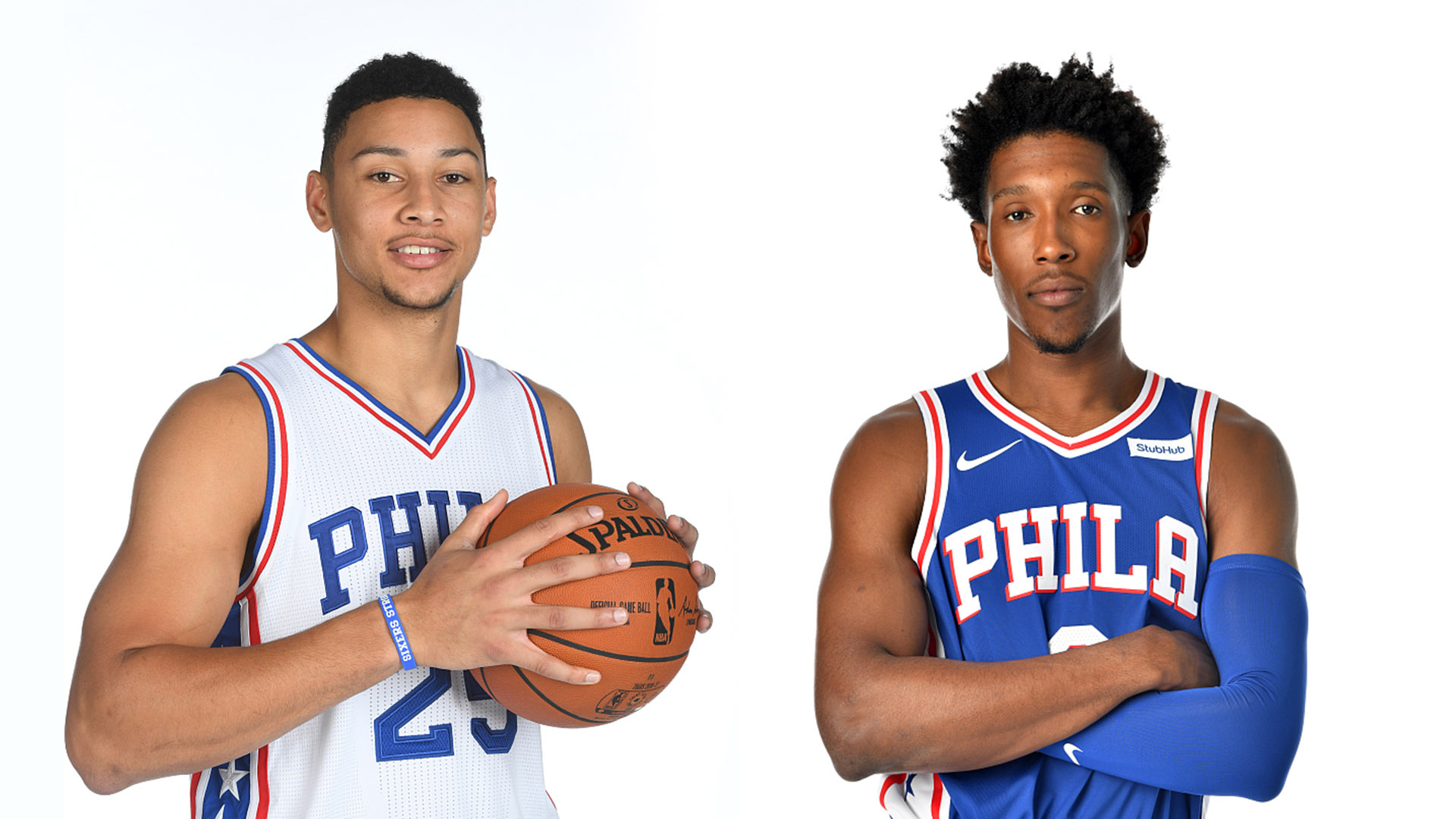 In fact, Horford's joining further improved the 76ers' defense in other ways. The team has grown bigger – the shortest Richardson in their starting-lineup is 1.98 meters – without losing their quickness and agility. Richardson and Simmons can stop most intruders from entering the paint; Horford is reliable in both rim-protecting and switch; thanks to these two factors, Embiid can make easier choices between switching outside or staying inside with fewer worries.

Milwaukee, of course, has a great defense thanks to the rim protection by Brook Lopez, the patrolling help defense by Antetokounmpo and the front shield by Eric Bledsoe. Their problem is that Antetokounmpo is the only complete defender of the team but he can not do everything on his own.

What will happen when Bucks and 76ers meet? 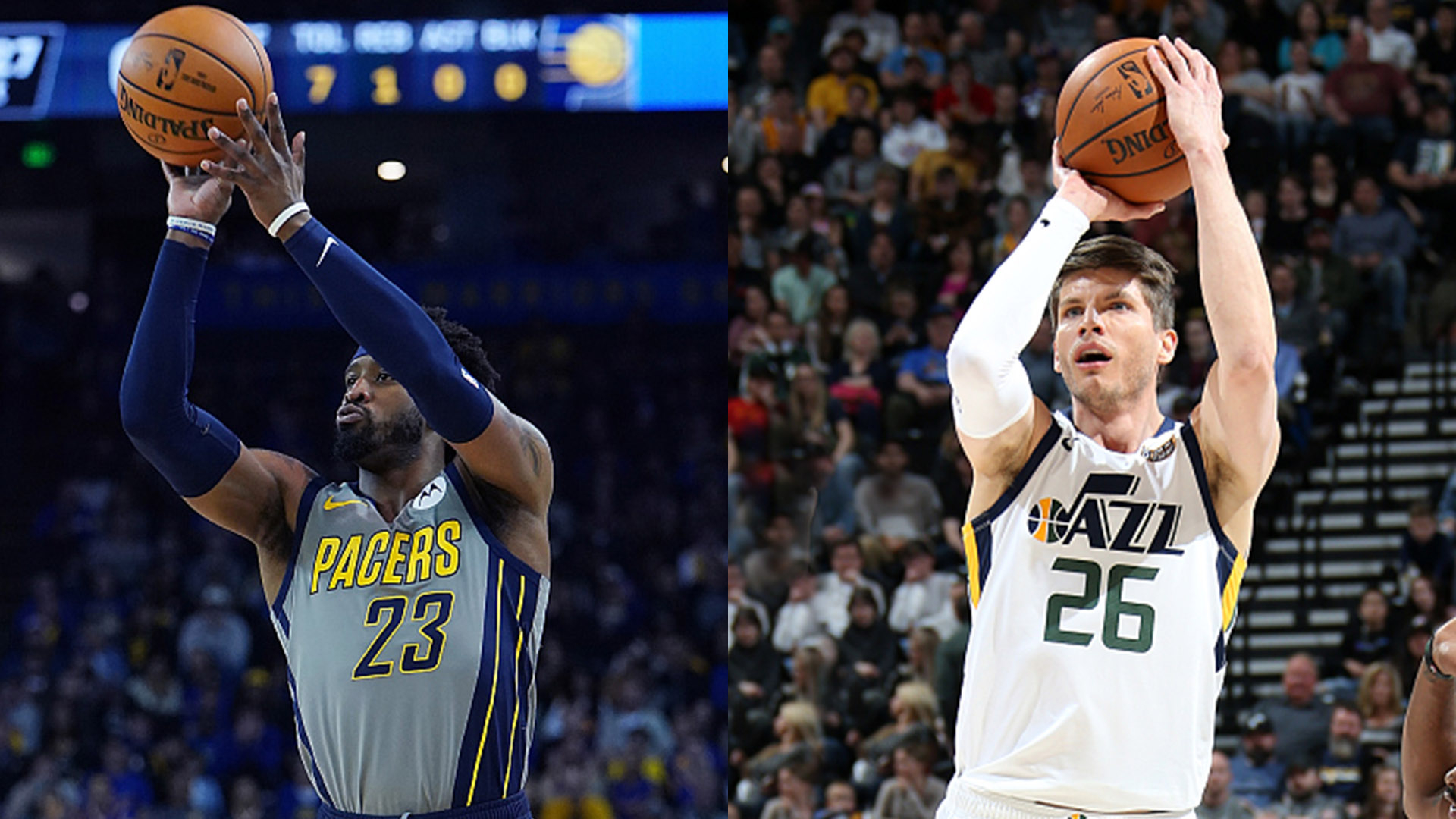 Milwaukee needs to change their offense if they want to break through Philadelphia's defense and their solution may lie with Wesley Matthews and Kyle Korver, two shooters who move all over the court. They need to force Philadelphia's big men to leave the paint or punish them for not doing it quickly – Milwaukee needs to do more on screen and hand-off plays.

In defense, the Bucks has two options: number one is leaving Matthews, Korver or George Hill on the court to assist offense and test Simmons' offense; and number two is putting Antetokounmpo on Simmons so he can focus more on helping defense and sending Ersan İlyasova to cover Horford. In this way, both sides will be able to make smothering defense but the game can become very ugly. 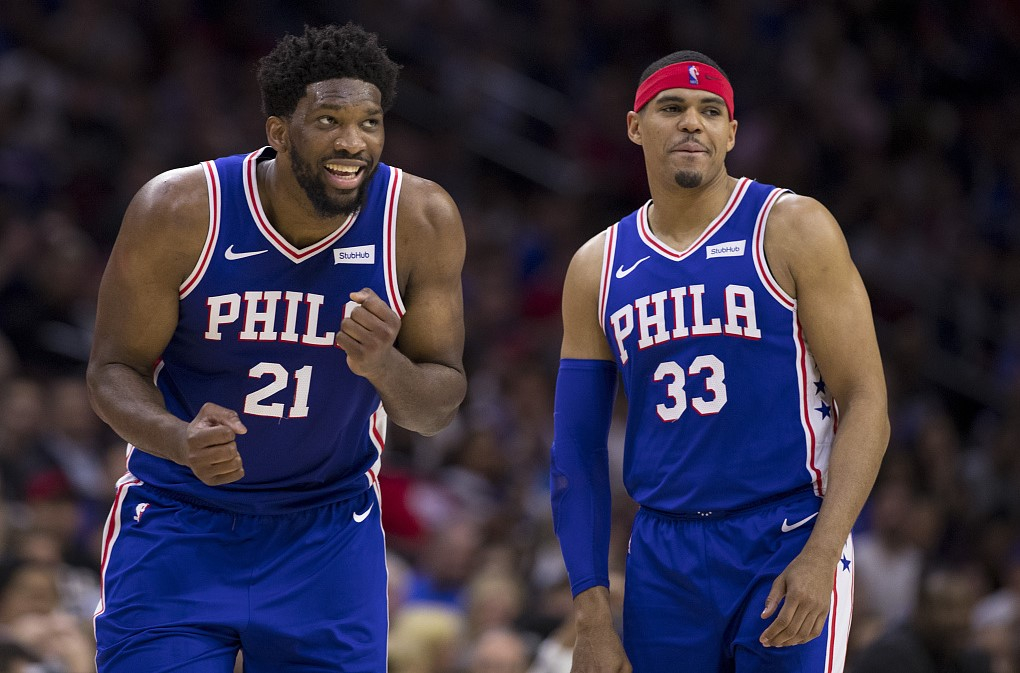 As for Philadelphia, it's hard to find any effective solution in offense with their current squad. The team does not have a top outside attacker or shooter to change Milwaukee's defense; Horford is known for efficiency, not production and Embiid is the opposite. Their biggest hope is that, while both sides struggle in the offense, they can make tougher shots.

Defense though is the 76ers' advantage, it may not last for the whole game because the team does not have enough depth. If they want to remain strong in defense, the 76ers will have to keep their starting players on the court longer than expected, which will cause other trouble – Embiid has never been known for healthy since he entered the league and Horford is already 33 years old.

Generally speaking, both the Bucks and the 76ers are able to stifle each other's offense when their starting squads are in the court. However, the Bucks have a longer bench which will give them the advantage in the linking stages.