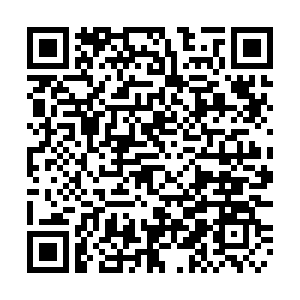 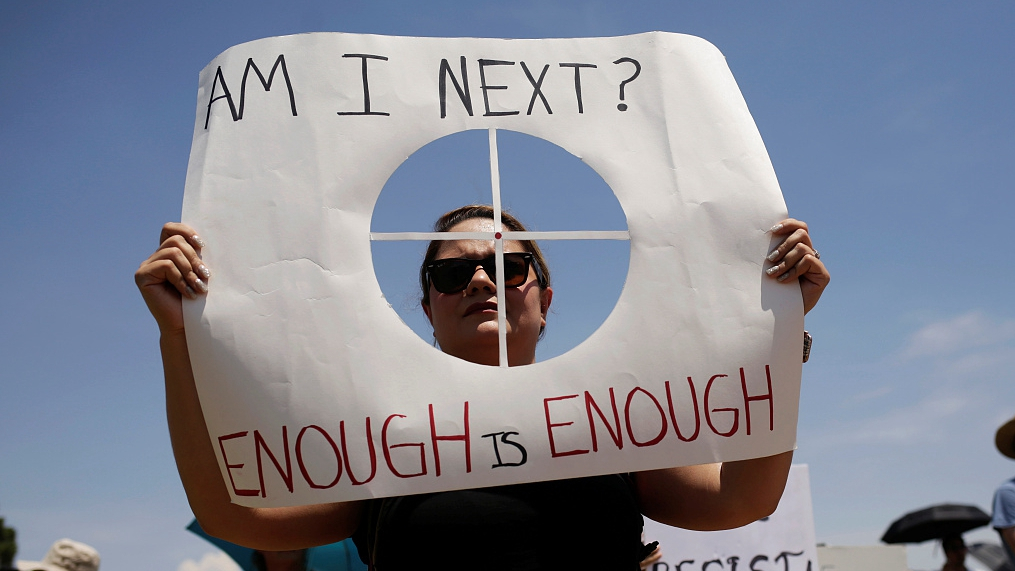 A woman holds a placard in the shape of a shooting target during a rally against the visit of U.S. President Donald Trump after a mass shooting in El Paso, Texas, U.S., August 7, 2019. /VCG Photo

A woman holds a placard in the shape of a shooting target during a rally against the visit of U.S. President Donald Trump after a mass shooting in El Paso, Texas, U.S., August 7, 2019. /VCG Photo

There has been an average of more than one mass shooting every day in the U.S. this year, according to the Gun Violence Archive. Americans are demanding answers once again after a week of horror that saw 36 people killed in two mass shootings in El Paso, Texas and Dayton, Ohio, and a third earlier in Gilroy, California.

Some have renewed calls for stricter gun-control laws. Others have pointed to mental illness, video games, drug use and fatherlessness, while offering the usual "thoughts and prayers."

A recent poll conducted by Reuters/Ipsos shows nearly half of all Americans expect another mass shooting will happen soon. The survey also found that half of all Americans, including both Democrats and Republicans, believe that "the way people talk about immigration encourages acts of violence."

In a nation already divided on the gun debate, the environment is just getting acutely more toxic as the public spirit is cracking under fears of who could be the next target of a mass shooting.
One Twitter user's post that has been widely shared describes how racism toward Mexican Americans went from them being treated as foreigners to fearing for their lives. 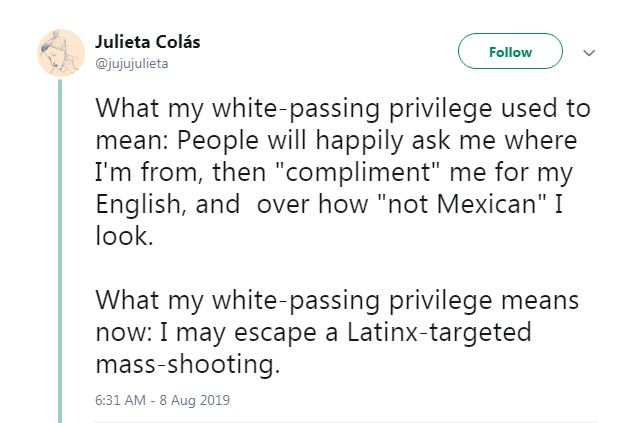 A screenshot of a tweet describing racism suffered by Hispanic Americans.

A screenshot of a tweet describing racism suffered by Hispanic Americans.

"Invasion" and "shoot them"

As the country struggles to make sense of recent events, U.S. President Donald Trump has come under fire for his hardline rhetoric on immigration, which was believed to have stoked racist violence.

"When Mexico sends its people, they're not sending their best," Trump said when he first announced candidacy in 2015. "They're bringing crime. They're rapists. And some, I assume, are good people."

The president condemned bigotry in a nationwide address on Monday, but it failed to convince opponents given the president's long history of anti-immigrant rhetoric and reluctance to call out white supremacy.

At a rally in Panama City Beach, Florida in May, when Trump asked the crowd "how do you stop these people?" after calling those crossing the southern border an "invasion," a voice in the audience was heard shouting, "shoot them!" At that point, Trump paused, shaking his head, and then responded by joking, "Only in the panhandle, you can get away with that." 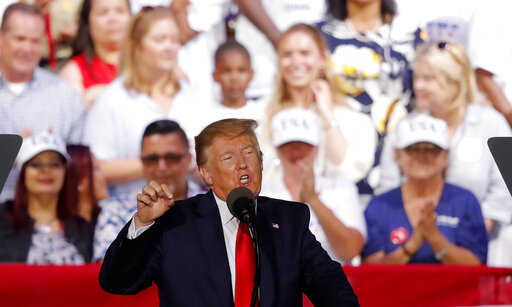 Former Texas congressman and presidential candidate Beto O'Rourke, a native to El Paso, said the shooting in his hometown on August 3 was an act of terror inspired by Trump's racism.
The 21-year-old gunman Patrick Crusiu, who admitted to targeting Mexican immigrants, reportedly posted a screed online about a "Hispanic invasion of Texas" before carrying out the rampage at a Walmart superstore.

Critics quickly pointed out that Trump's repeated framing of Hispanic immigration as an "invasion" at rallies and on social media has reinforced this perception, though Crusiu said his views predate Trump's rise and that any attempt to blame the president for his actions was "fake news."
There were about 59.9 million Latinos in the United States as of July 2018, accounting for 18 percent of the population, up from 14.8 million, or 6.5 percent in 1980, according to the Pew Research Center.

Other mass shooters who were known white supremacists in recent memory include Robert Bowers, who killed 11 people in the 2017 Pennsylvania synagogue shooting, and Nikolas Cruz, who killed 17 people in a high school in Parkland, Florida.
Prominent Democrats have all spoken out this week against Trump's role in normalizing racism in the U.S., as well as his refusal to address the country's gun problem seriously.

Former president Barack Obama called on Americans to "soundly reject language coming out of the mouths of any of our leaders that feeds a climate of fear and hatred or normalizes racist sentiments," in a rare public comment since leaving the office.
In response, Trump and conservative media pointed out that Obama had 32 mass shootings during his eight-year tenure. Those include the Sandy Hook school massacre in Newtown, Connecticut, the Pulse Nightclub shooting in Orlando, Florida and the 2015 Charleston church shooting, which also had a known racist motive. 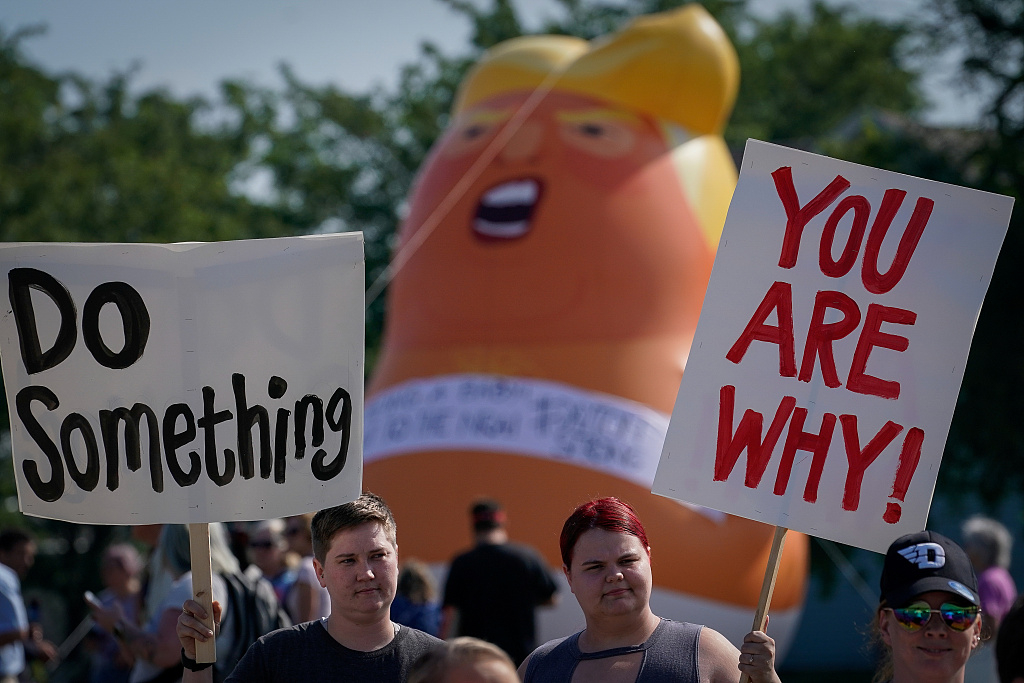 U.S. liberals and conservatives disagree strongly on the causes of mass shootings. Research shows while most people cite mental health, racism and bigotry and easy access to firearms as the top causes, one in four Republicans polled said that video games were to blame. Trump also mentioned video games as a factor, a myth repeatedly refuted by scientific studies.

Marc A. Thiessen, a research fellow at a conservative think tank, wrote in the Washington Post on August 7: "If Trump is responsible for El Paso, then Democrats are responsible for Dayton." The gunman in the latter case was found to be a radical leftist based on his social media history. A wide range of political positions were seen in past shootings.

"Often, mass shooters perceive themselves to be victims or to have been hurt in some way," Adam Lankford, a professor of criminology at the University of Alabama told Los Angeles Times. "They need to create a narrative that leverages their feeling of pain and then justifies violence as self-defense. Rather than having to create their own story, they can just latch on to the ideology."

Lankford added that even under a different president, the shooter would have found a different justification for their action.

Despite the common perception that mass shootings have become a more frequent occurrence, official data shows the rate of such incidents has not changed over the past decade, while the ethnicity of the perpetrators is in proportion with the make-up of the general U.S. population.

Researchers suggest the media's interpretation of these events has contributed to this perception. 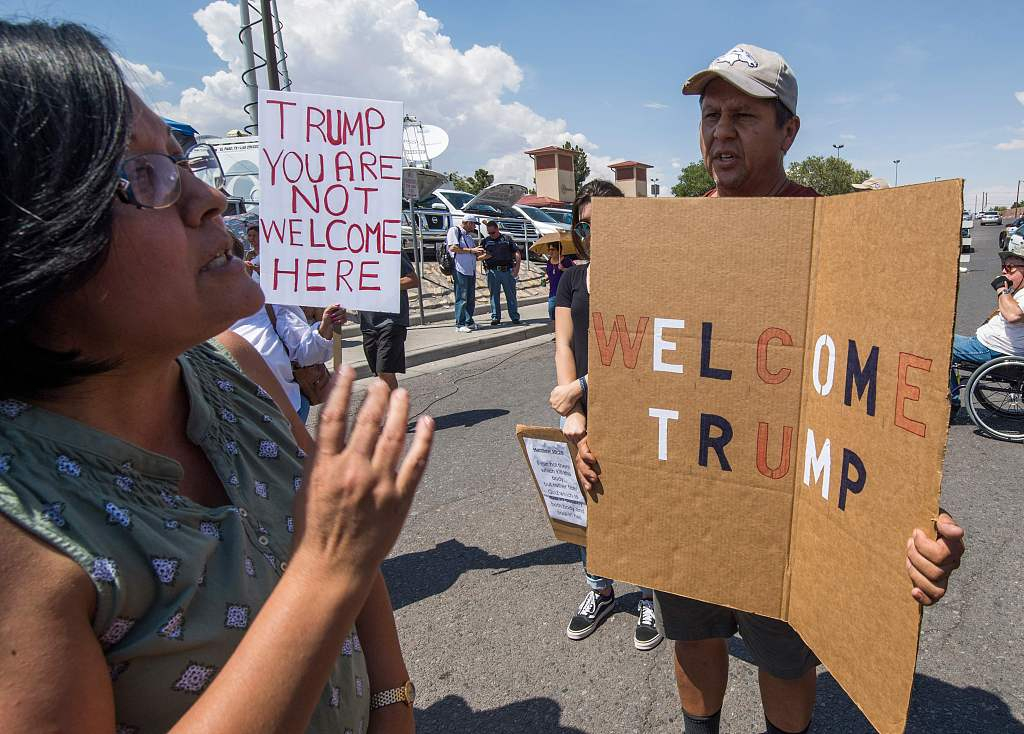 Anti-Trump protesters argue with Trump supporters outside the makeshift memorial to the victims of the Walmart shooting in El Paso, Texas, August 7, 2019. /VCG Photo

Anti-Trump protesters argue with Trump supporters outside the makeshift memorial to the victims of the Walmart shooting in El Paso, Texas, August 7, 2019. /VCG Photo

This week, a photo showing a smiling Trump giving a thumb up while first lady Melania holds a baby, whose parents were killed in the El Paso shooting, sparked a storm of criticism, with U.S. media calling Trump a narcissist who lacks empathy.

The baby, who made headlines after it emerged that both of his parents died protecting him, was reportedly brought from the hospital, especially for the photo-op.

But to complicate the matter further, the child's uncle, who posed alongside Trump in the photo, has revealed that the family, who had fallen victim to the hate-fueled shooting, were supportive of the president.