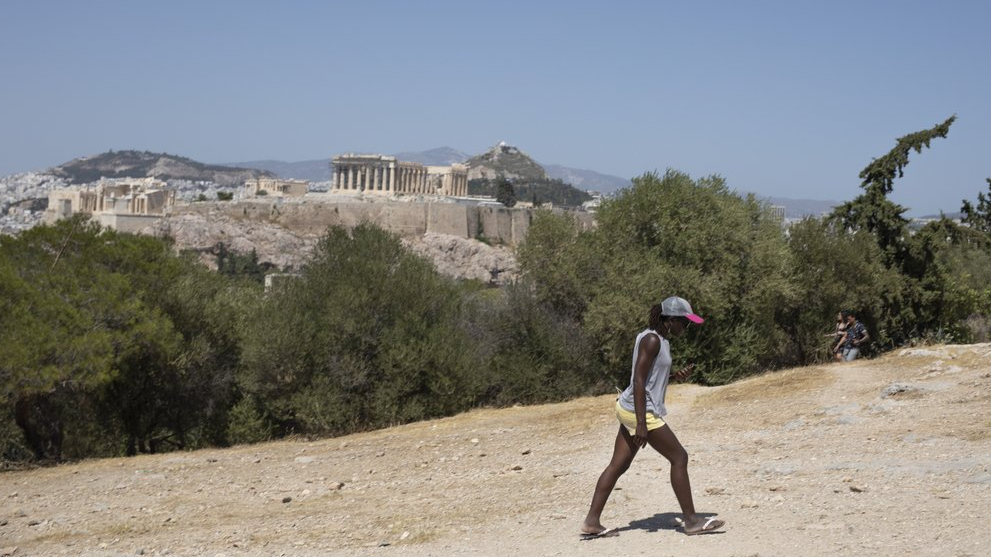 A tourist climbs Filopappos hill against the backdrop of the Acropolis hill during a hot day in Athens. /AP Photo

A tourist climbs Filopappos hill against the backdrop of the Acropolis hill during a hot day in Athens. /AP Photo

The temperature in Greece has climbed to 42 degrees Celsius as a new heatwave hit the country last week, Xinhua reported. Greece has been hit by several rounds of scorching heat this summer.

The thermometer reached 37-39 degrees in eastern Peloponnese and Attica, 41-42 degrees Celsius in Thessaly and 40-41 degrees in the northeastern half of Central Greece, according to the recent predictions of the meteorological service of the National Observatory of Athens.

Greece has gone through at least three rounds of sweltering weather this summer, accompanied by intermittent rainstorms and strong winds. One of its most famous archaeological sites, the Acropolis in Athens, has shut down to visitors for four hours during the afternoon because of scorching temperatures in July.

High temperatures, along with high humidity levels, increase discomfort for the residents and tourists. The extreme weather has dealt a heavy blow to tourism in most cities in Greece, causing a massive fall for the local economy.

"This (weather) is completely out of the ordinary, and we have no idea how to plan our business," Christophoros Pliatsikas, a seaside restaurant owner in Collins Bay, which has been severely affected by severe weather this year, told CCTV.

The tourism of the Greek mainland area and islands at the Aegean Sea and the Ionian Sea has been battered in recent years due to the bad weather. The storms also led to decreasing tourist numbers to many famous beaches. The bars and restaurants near these beaches have sustained high economic losses, by more than 20 percent year on year.