Fans in China: More than a cooling accessory
By Ai Yan 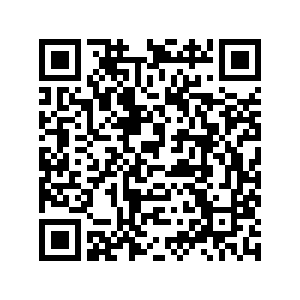 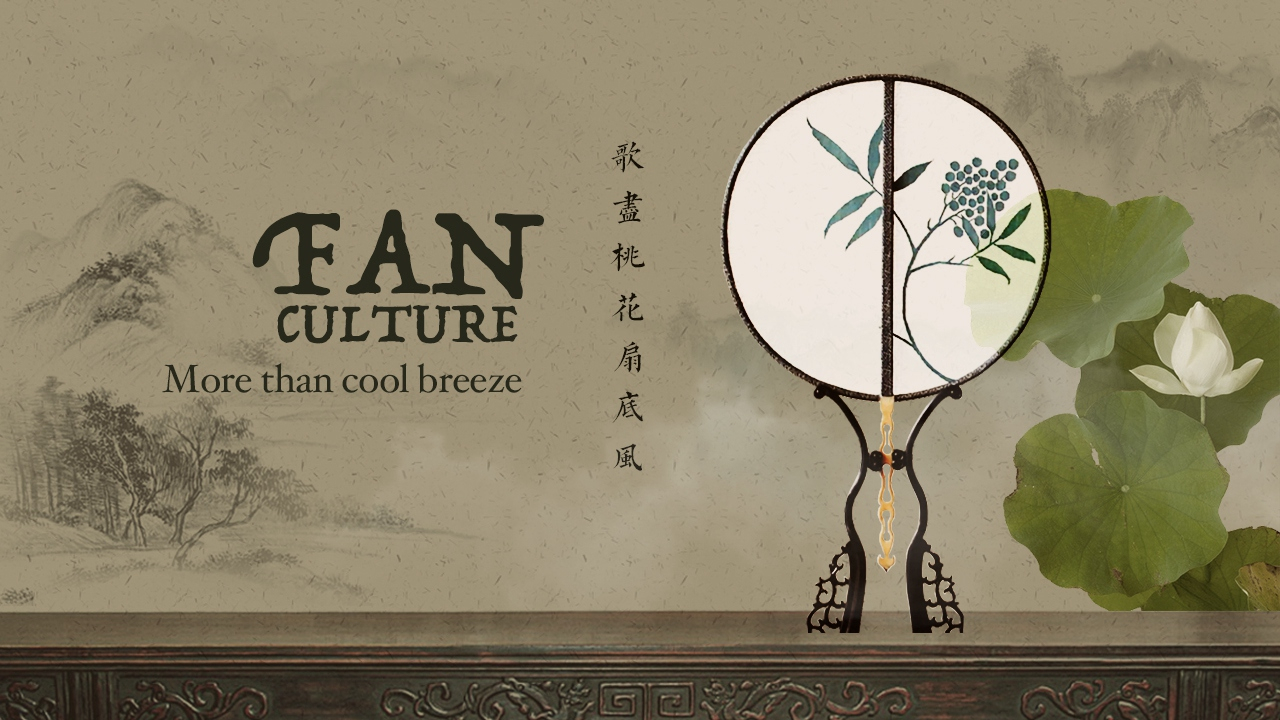 Heatwaves have swept the Northern Hemisphere this summer with temperatures near the North Pole even surpassing 20 degrees Celsius.

Air conditioners and electric fans are almost indispensable during the hot weather, but long before the advent of technology, people had one weapon to beat the heat: handheld fans. And for the Chinese, fans are more than a way to cool down when it's hot, they're part of the culture.

The history of the handheld fans could be traced back to the days of the Yellow Emperor (2717 B.C. – 2599 B.C.), with different materials, shapes, and usage.

Feather fans: A symbol of wisdom 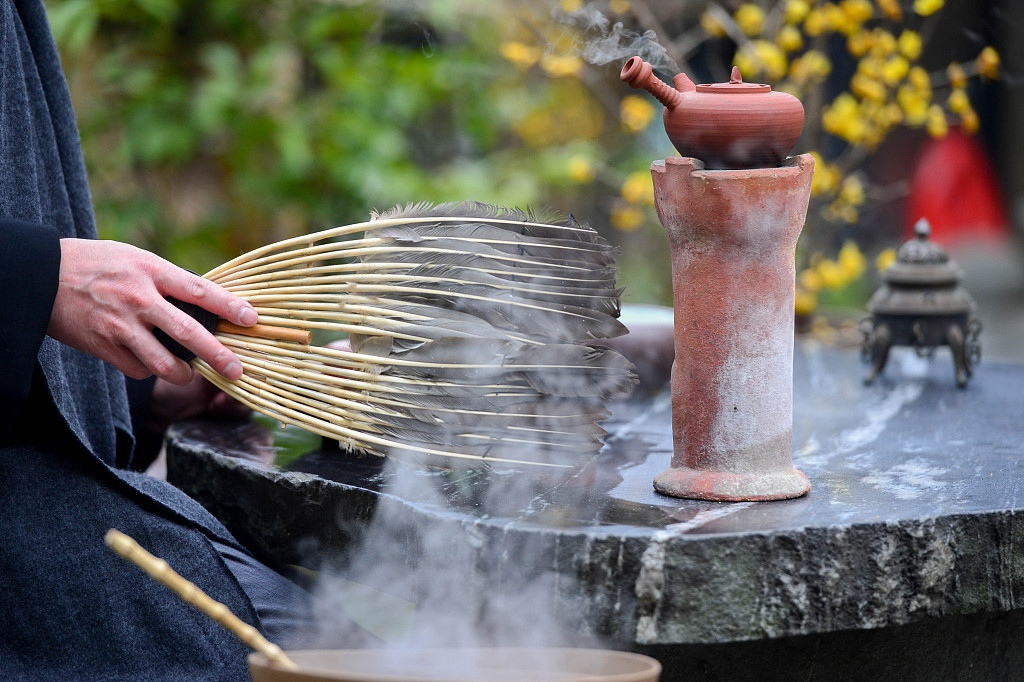 The earliest form of fans is the feather fan. The records of such fans appeared in historical archives of the Shang Dynasty (1600 B.C. – 1046 B.C.). 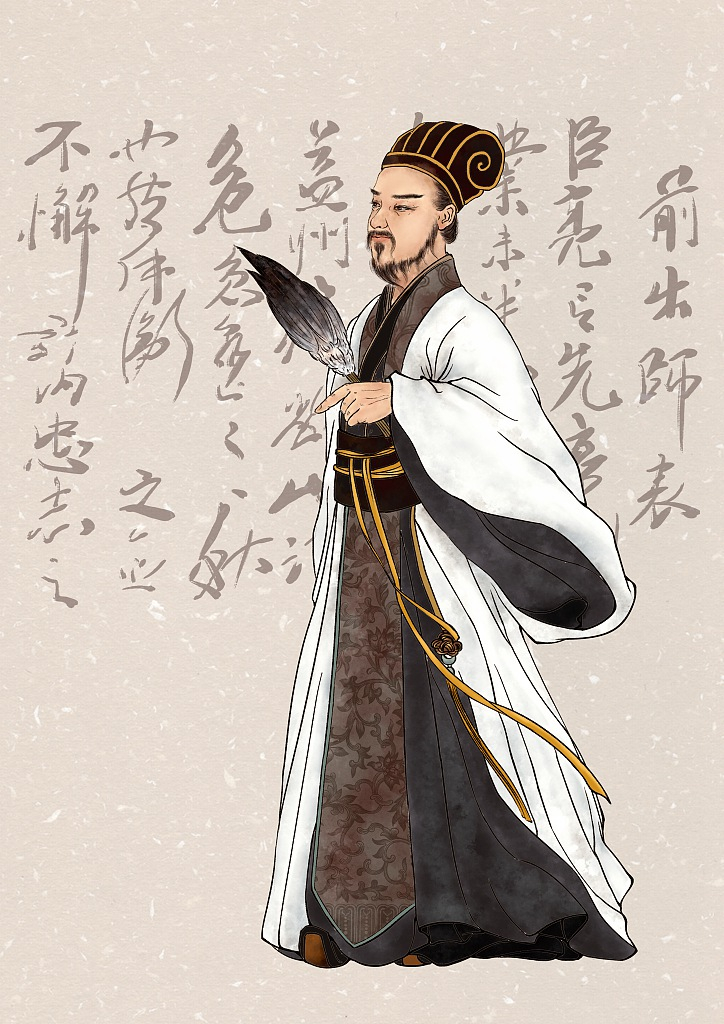 In all the historical documents and literary depiction of Zhuge Liang, he always carried a white feather fan, inspiring a whole breed of scholars and literary gurus who came after him and followed his suit.

The ancient accessory among the highly educated Chinese gentlemen even made a mark in the Chinese culture. The feather fan is considered as a symbol of wisdom, and portrayed in literature, paintings, and even TV series and films nowadays.

If feather fans were trending mostly among men, round fans were Chinese women's best friend. 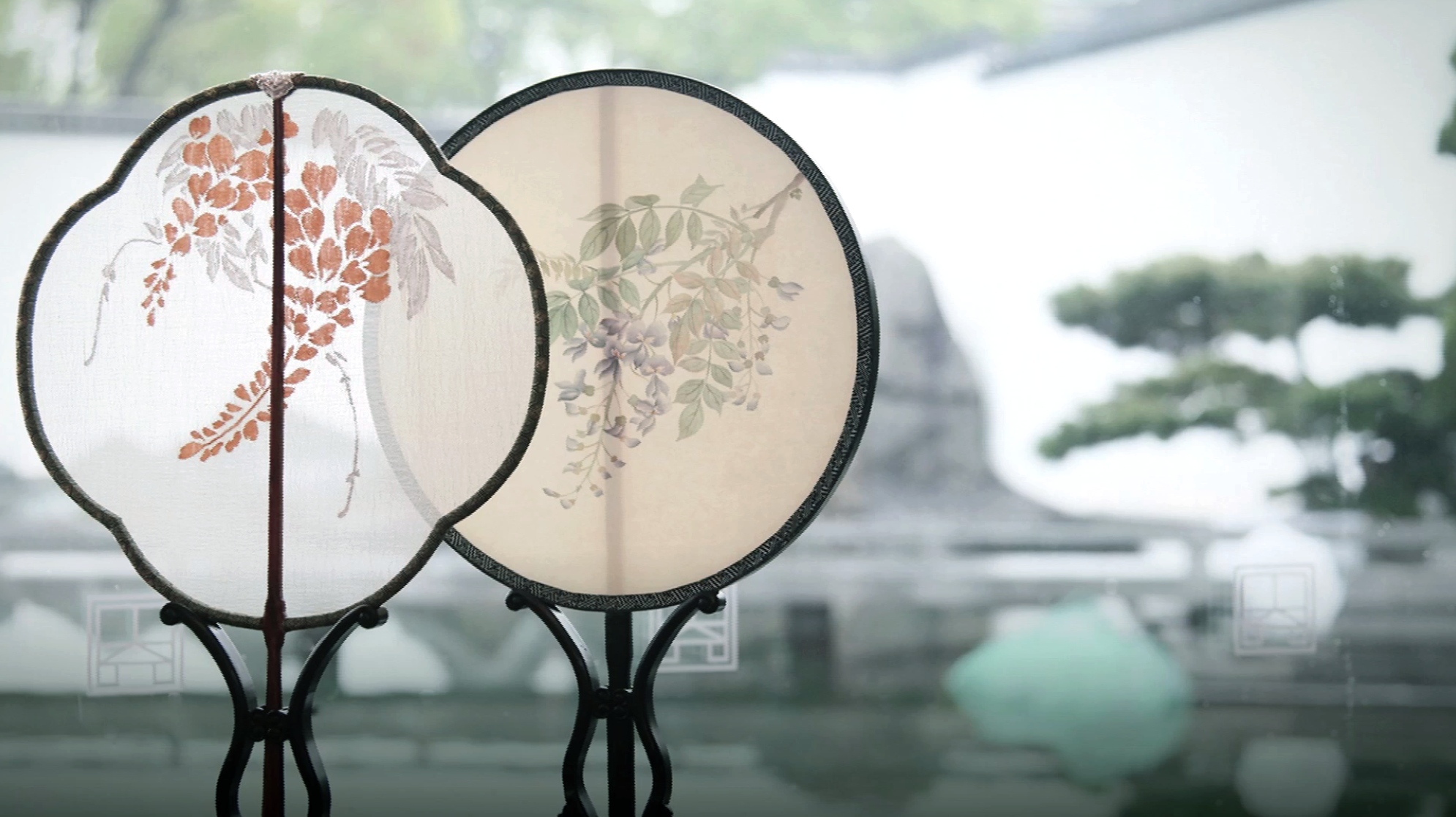 CGTN still of two round fans.

CGTN still of two round fans.

The round fan originated in the West Han Dynasty (202 B.C. -8 A.D.), and was usually made of bamboo frames of round or oval shapes, and white fine silk fabrics. Therefore, it was a luxury item back in those days, and could only be afforded by wealthy families.

The round fans were usually compared to the moon, due to their shape and white color. The item was therefore given the meaning of love, which is like the "inconstant moon that monthly changes in her circle orb."

Chinese female poet Lady Ban, who was a concubine of an emperor, also compared herself to a round fan, which could easily be abandoned as soon as the autumn arrives. In the Chinese culture, the round fan is synonymous with elegance and beauty of women, as well as their happiness and sorrow. 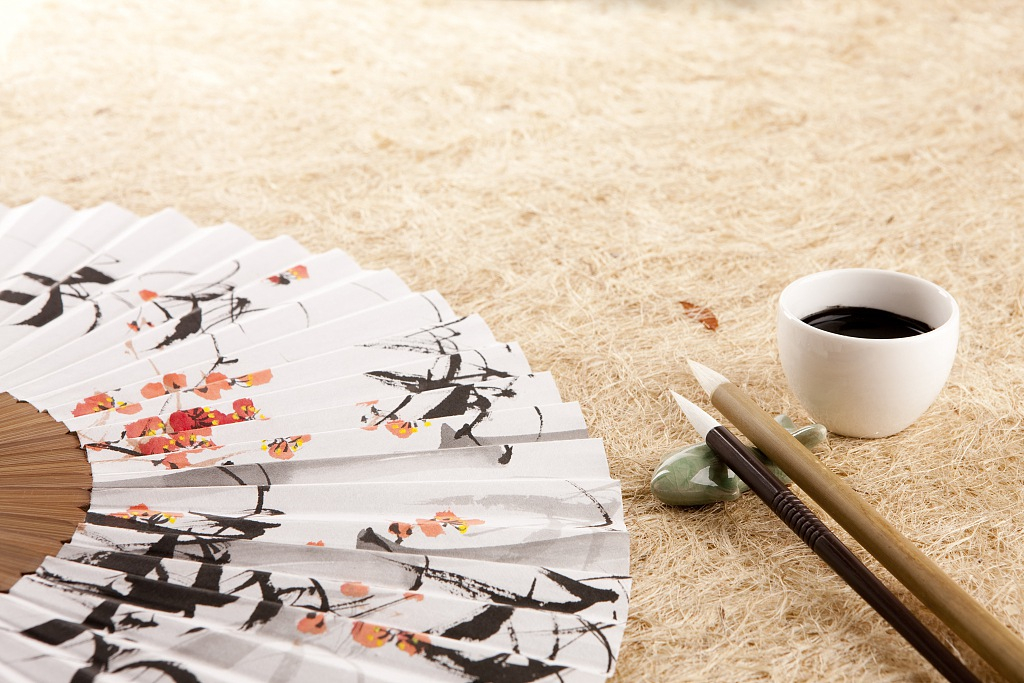 A folding fan with brushes and ink. /VCG Photo

A folding fan with brushes and ink. /VCG Photo

The folding fans are quite familiar to us. They have a history of hundreds of years, and could still be spotted in our daily life.

In fact, the folding fan originated in Japan, and was introduced to China in the Northern Song Dynasty (960 – 1127). It is much more convenient than the round fans, and therefore gradually replaced the latter.

The popularity of the folding fan owed greatly to the Chinese literati, who gradually cultivated a trend of painting and writing on the folding fans. They also decorated the fans with fan pendants made of jade sculptures, collected them in delicate boxes or silk sachets and turned them into arts rather than just tools. 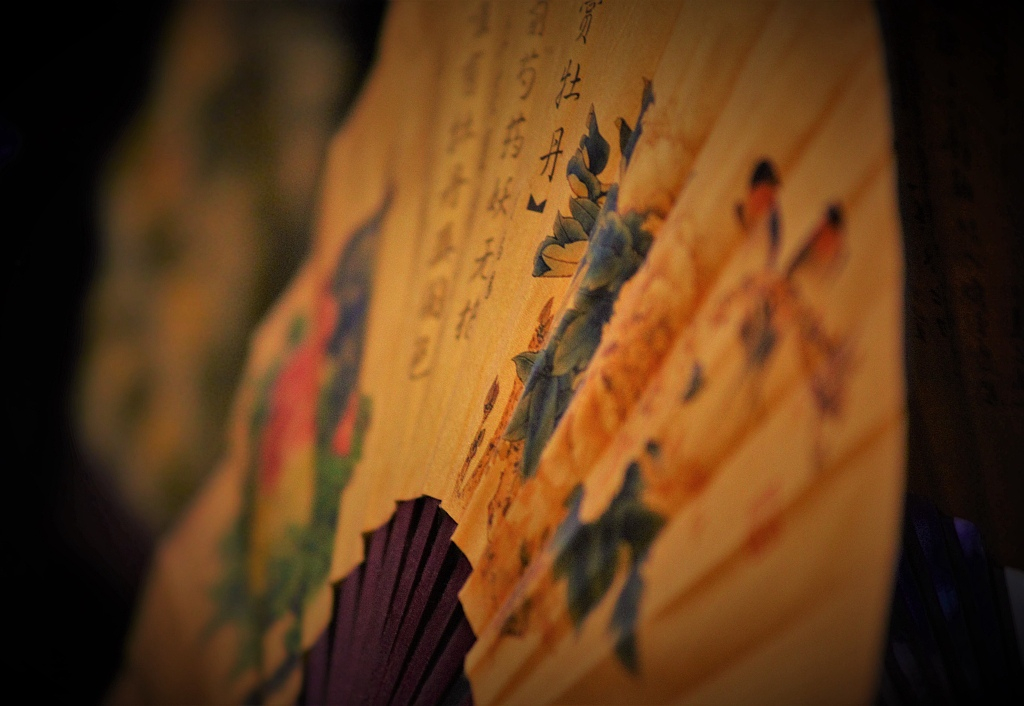 If you visit a Chinese museum today, it is quite likely that you see some collections of fan paintings or fan calligraphy on display, since they have already become part of Chinese paintings.

The folding fan has made its way into the Chinese decoration art as well. Walking in an ancient garden, such as Suzhou Gardens, one could easily find windows or furniture made into the shape of a folding fan.

Cattail leaf fans: A close friend to everyone

Most of the fans we mentioned above were made of expensive materials, and were symbols of status and wealth. But the cattail leaf fans are for everyone. The cattail leaf grows in the south and was the ideal material because it's cheap and easy to find. 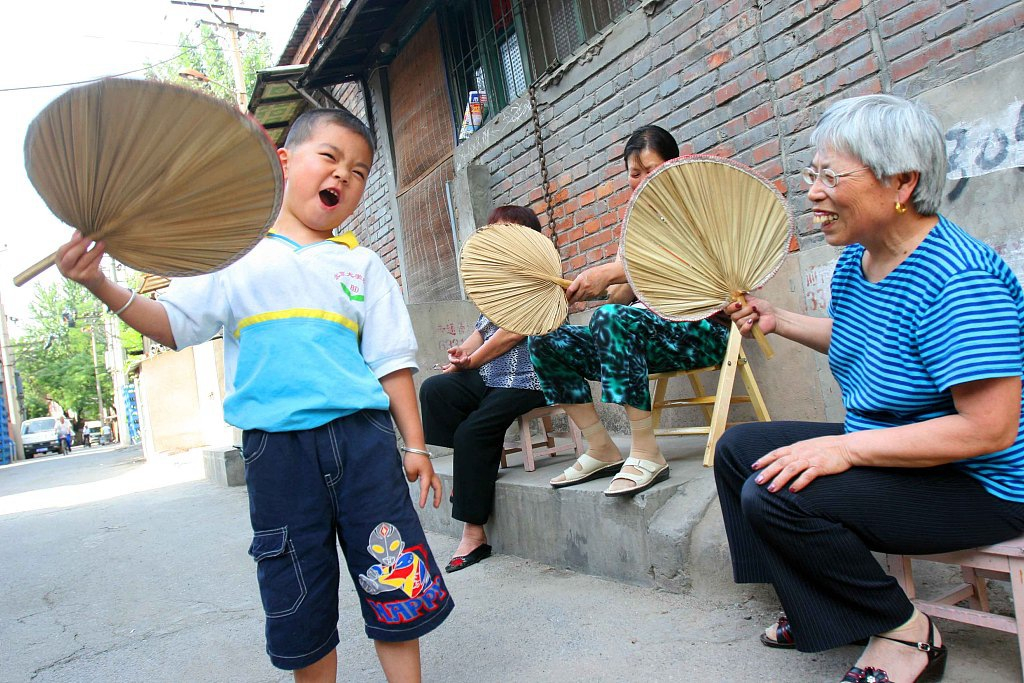 Residents in Beijing are using cattail leaf fans in summer of 2007. /VCG Photo

Residents in Beijing are using cattail leaf fans in summer of 2007. /VCG Photo

Even though not as delicate as the round fans, feather fans or folding fans, the cattail leaf fans are definitely the most useful kind.

The cattail leaf fan is a testament of traditional lifestyle. Many Chinese people today could still remember the old days, when neighbors sat together during summer, waving their cattail leaf fans, drinking a cup of tea while talking about the stories of their daily life.

Even though the cattail leaf fans are not quite often used today, memories do linger.