Are academics the new victims of the China-U.S. trade war?
CGTN 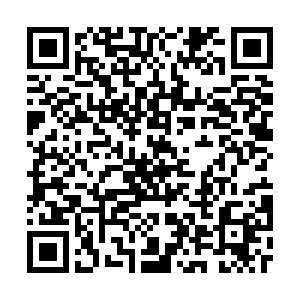 It is not hard to explain the axiom "innocent until proven guilty". A presumption of innocence is vital to ensuring a fair trial, or more generally, an impartial common judgement. But what if someone is said guilty based on their racial group?

As the trade disputes between China and the U.S. heats up many Chinese and Chinese-American researchers suffer under the growing academic scrutiny in the United States and are ousted from institutions. They are called and visited, asked about their links to China, their family connections and even their academic secrets.

A previously regular research trip to China has to be reported to schools and a Chinese friend's visit can raise a series of concerns. This is the "new normal" according to some young Chinese scholars in top universities in the U.S. that CGTN interviewed.

Wang, who is a promising tenure track professor in Fordham University, said some outstanding Chinese tenured professors have decided to quit and go back to China, as they feel much pressure and fear on campus. "The air is no longer free," he said.

Targeting a certain ethnicity is not normal in academia. The Chinese scholars and their scientific work in many cutting-edge fields are suffering under wrong presumptions, that academic collaborations are used as covers for espionage of American higher education institutions. While their devotion and dedication to research are overlooked, chances of international cooperation in many areas are gone.

Sean Ding, co-founder and CEO of GRisk (a global risk analytics firm based in Shanghai and Washington, D.C.), said that key collaborations between China and the U.S. in advanced technologies such as climate change, space, and artificial intelligence were forced to stop. And, this is a loss not only to the two countries, but the whole international research communities after many years' efforts based on free data exchange, noted Sean Ding. 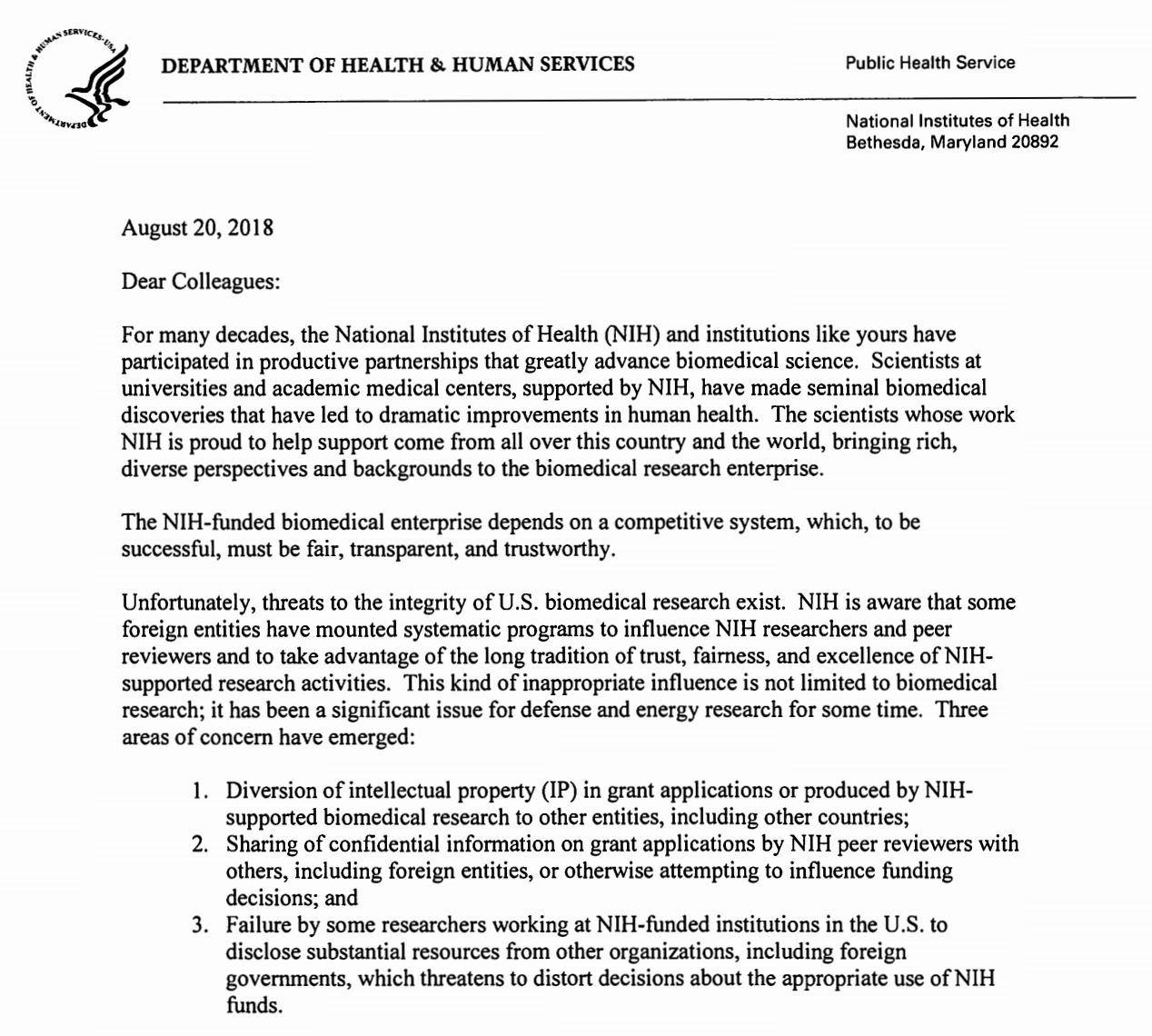 The U.S. National Institutes of Health (NIH) send a letter to the more than 10,000 American institutions. /CGTN Photo

The U.S. National Institutes of Health (NIH) send a letter to the more than 10,000 American institutions. /CGTN Photo

August 2018, the U.S. National Institutes of Health (NIH) director Francis Collins wrote a letter to more than 10,000 American institutions stating that it was concerned that "some foreign entities" were interfering in the funding, research and peer review of NIH-supported projects. NIH has again sent letters earlier this year to dozens of major U.S. research universities asking them to provide information about specific faculty members with NIH funding "who are believed to have links to foreign governments."

"Now the atmosphere of the whole Chinese community in the U.S. is unfortunately full of fear," said Sean. To CGTN he stated that with the trade war between China and the U.S. heating up, bad influence remains rife in research institutes and private sectors, especially big corporations with hi-tech labs. 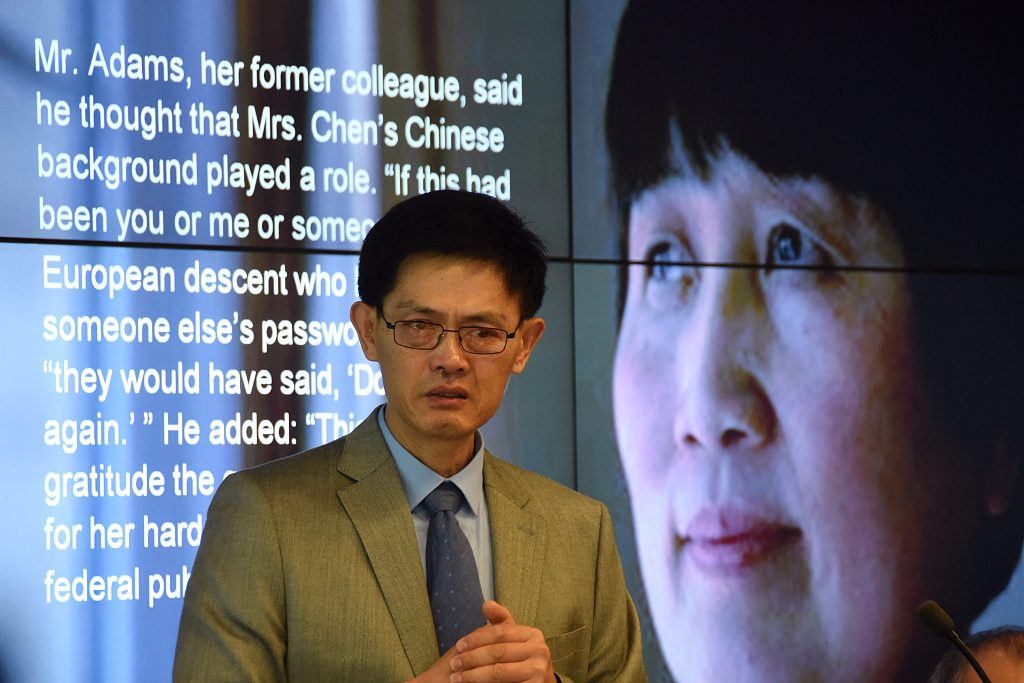 "Talents may not get opportunities in those well-equipped labs because they are from China. As funding becomes a means to influence how scientific agencies choose their candidates, the so-called 'foreign influences on research integrity' actually hinder groundbreaking research," noted Sean Ding.

"Free exchange of ideas and international collaboration should never be coerced into a trade war between two countries," said Lian Guo, a Chinese tenured professor in the U.S. focusing on biological artificial intelligence. His research domain is always a focal point to a lot of related entities, which makes him more cautious when getting in touch with "sensitive groups" from China or even just friends.

The word "fear" again, appeared many times during the interview.

In May, two Chinese-American neuroscience professors Li Xiaojiang and his wife, Li Shihua were fired by Emory University in Atlanta, Georgia, for failing to disclose their ties to institutions in China, an accusation the couple denied.

Another Chinese-American professor, Xi Xiaoxing, a professor of physics at Temple University, was wrongfully arrested for alleged stealing secret technology for entities in China. 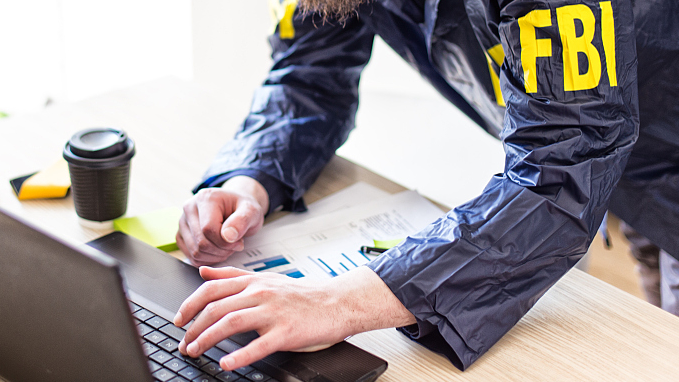 Many Chinese and Chinese-American researchers suffer under the growing academic scrutiny in the United States. /VCG Photo

Many Chinese and Chinese-American researchers suffer under the growing academic scrutiny in the United States. /VCG Photo

Compared with being fired from the institutes or colleges, most of the Chinese scholars are more worried about the growing suspicion of the connection between their research and the so-called espionage on behalf of China. STEM students from China are not feeling any less welcome at their universities today and senior researchers and tenured professors are being deprived of the right of free academic communications.

"Scientific research depends on the free flow of ideas," said Frank H. Wu, president of the New York-based Committee of 100 (a group of influential Chinese Americans), in an interview with U.S. media. He emphasized due process and equal protection in such big scale scrutiny, "America's national interest is best advanced by welcoming people, not by racial stereotyping based on where a person comes from."

It's very easy to understand that basic research is open for a reason. When collaboration crosses national boundaries, research advances. As racial profiling fuels frustration on campus, many Chinese researchers' belief in the line drawn between academic freedom and political influence is fading away.

Admittedly, there is a certain vagueness and sensitiveness in the process of data and information sharing among international academia. But, as Sean Ding said, once a "whole-of-society response" is taken by one side, the other side has to react. In this scenario, academic scrutiny triggered by the trade war is becoming a new frontline.