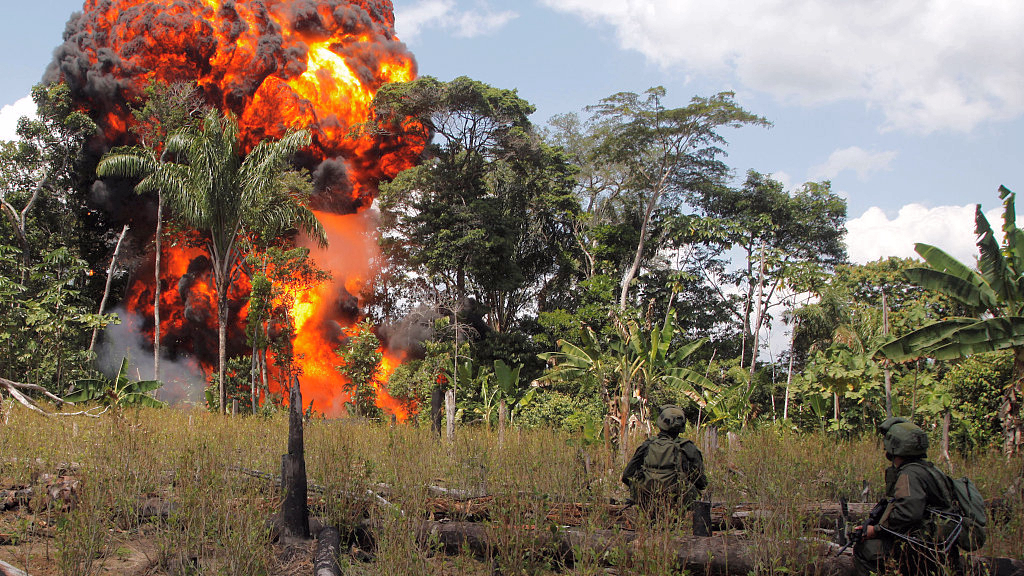 Colombia has won some breathing space from the United States over its record cocaine production.

After threatening to withdraw the South American country's certification as a cooperative partner in the fight against narcotrafficking, President Donald Trump has now relented, a decision that means American aid programs can continue.

In 2017, Colombia produced its largest ever crop of coca – the base ingredient in cocaine, much of which is smuggled into the United States. In so doing, the relationship between these two historical allies – the world's biggest producer of cocaine and the world's biggest consumer – was fraying.

Two years ago, the U.S. administration said it had "seriously considered designating Colombia as a country that has failed demonstrably to adhere to its obligations under international counternarcotics agreements" because of the growth of coca cultivation and cocaine production.

As late as March, Trump was complaining that “more drugs are coming out of Colombia right now" than before Ivan Duque became president a year ago.

But in June, a report from the  U.S. Office of National Drug Control Policy said cocaine output had actually slowed for the first time since 2012. It said the number of hectares planted with coca fell slightly in 2018 to 208,000, from 209,000, while cocaine production fell to 887 tonnes from 900. 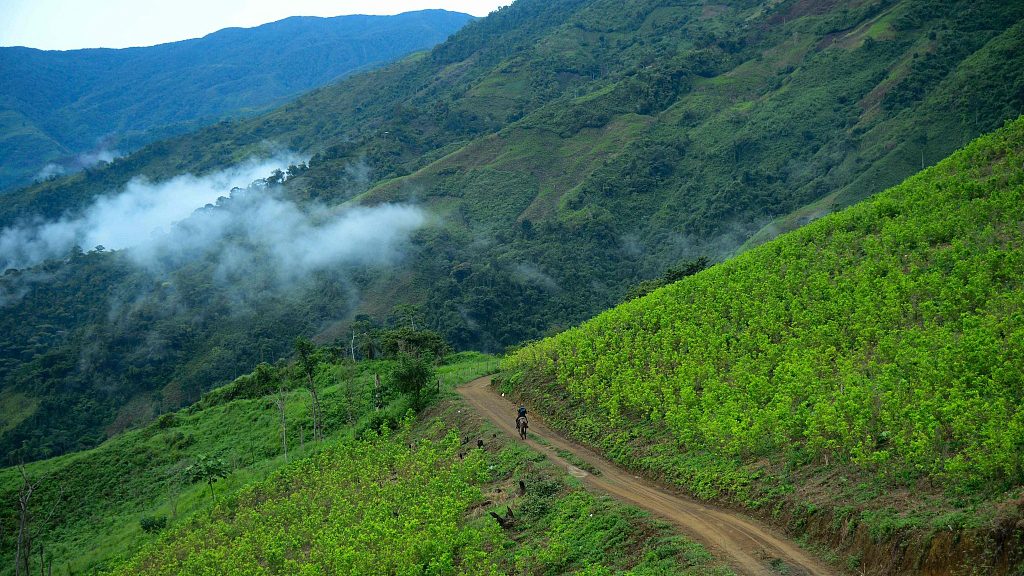 A coca plantation in Pueblo Nuevo, Colombia, on the day when the government and the FARC opposition movement inaugurates a voluntary pilot plan to eradicate such plantations, July 10, 2016. /VCG Photo

A coca plantation in Pueblo Nuevo, Colombia, on the day when the government and the FARC opposition movement inaugurates a voluntary pilot plan to eradicate such plantations, July 10, 2016. /VCG Photo

By August 9, Trump had changed his tune. "President Ivan Duque has made early progress in rolling back the record-high coca cultivation and cocaine production levels inherited from his predecessor and in leading efforts to restart a Colombian-led aerial eradication program," he said in a presidential declaration.

"This progress needs to continue and expand, and my administration will work with our Colombian partners to reach our joint five-year goal to reduce coca cultivation and cocaine production by half by the end of 2023."

The U.S. provides about 400 million U.S. dollars annually in military and economic aid to Colombia, but it always seemed a long shot that Washington would cut off the flow of funds at a time when Colombia is hosting more than one million refugees from Venezuela, which is facing a severe economic and political crisis.

Though he spared Colombia in his declaration, Trump blacklisted Venezuela and Bolivia, the two strongest anti-American voices in the region aside from Cuba, as "having failed demonstrably" in their international anti-narcotics obligations.

It is a sign of America's enormous appetite for illegal drugs that all but five of the 22 countries designated by the U.S. as major drug transit or major illicit drug producers are in Latin America and the Caribbean.

Trump claimed that his administration was making steady progress in turning the tide of the country’s drug epidemic, though critics would dispute that.

"This includes further efforts beyond our nation's borders, by governments of countries where dangerous illegal drugs originate," he said. 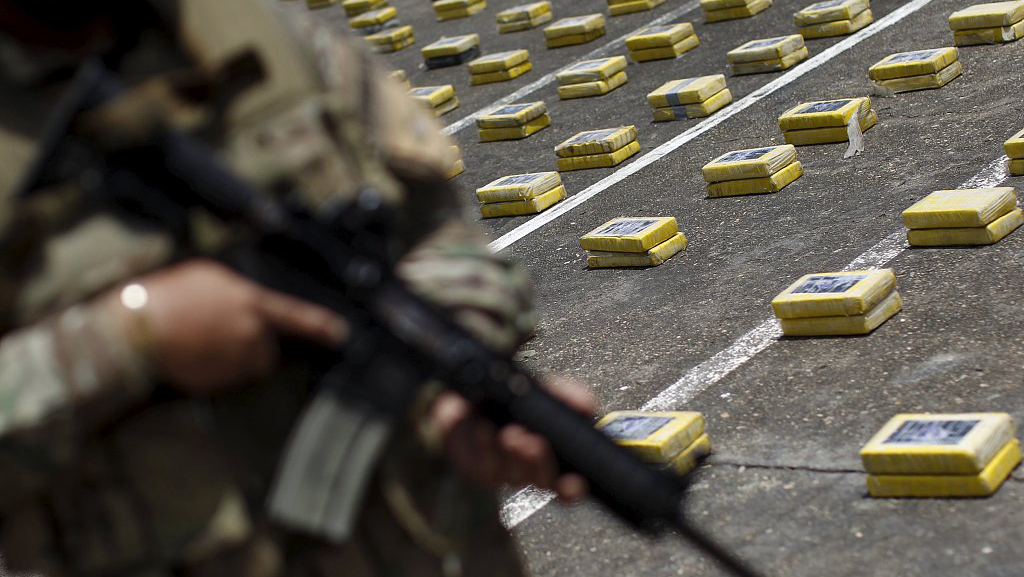 Seized packages of cocaine totaling 547 kilograms are displayed during a presentation to the media at the Air Naval police base in Panama City, March 7, 2016. Two Colombians were arrested. /VCG Photo

Seized packages of cocaine totaling 547 kilograms are displayed during a presentation to the media at the Air Naval police base in Panama City, March 7, 2016. Two Colombians were arrested. /VCG Photo

Though the actual reduction in coca production in Colombia, which is estimated to be responsible for 70 percent of the world's cocaine, can be described as small, analysts said it should still be regarded as significant.

"It shows the determination of the government, which believes it can expand on these results in the future," said Luis Plata, a former Colombian minister of trade and industry.

He credits manual efforts, which include sending soldiers in helicopters to pull out crops while others hold farmers back.

"All of this implies a huge human effort," Plata wrote in Americas Quarterly. "Over 12,000 people devote themselves to this high-risk mission, daily facing land mines and snipers."

Aerial spraying as an eradication tool that was pushed by Trump in his declaration is a potential banana skin for the government. Colombia's constitutional court banned the practice in 2015 because the herbicide used, glyphosate, was linked to cancer.

Duque has sought to overturn the ban and last month the court said its use could be reinstated if the government meets certain conditions. 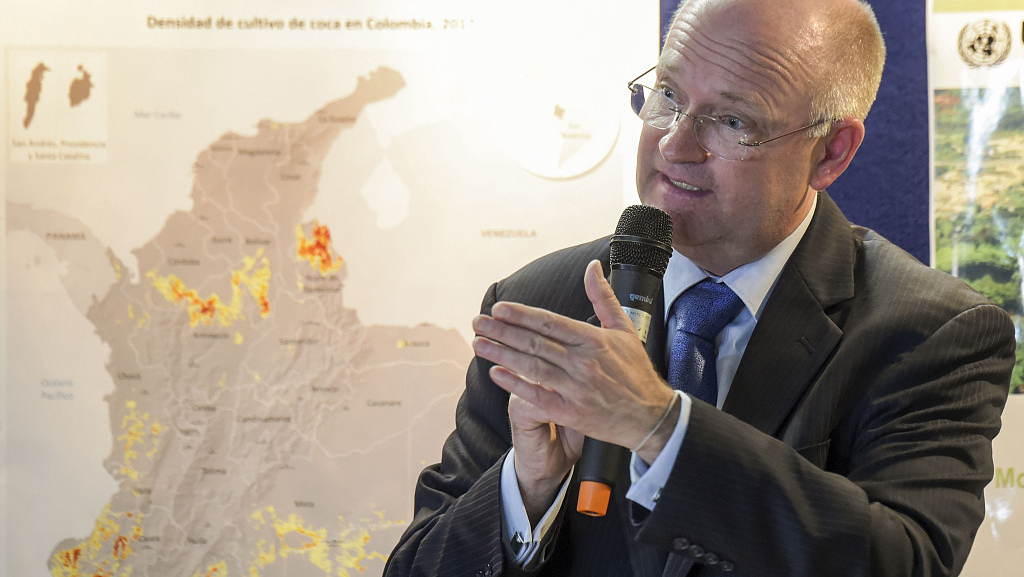 Bo Mathiasen of the UN Office on Drugs and Crime in Colombia speaks during the release of a report which that said illegal coca plantations in Colombia reached record levels in 2017 following a 17-percent increase from the year before, September 19, 2018. /VCG Photo

Bo Mathiasen of the UN Office on Drugs and Crime in Colombia speaks during the release of a report which that said illegal coca plantations in Colombia reached record levels in 2017 following a 17-percent increase from the year before, September 19, 2018. /VCG Photo

Cocaine production in some central areas of Colombia had dropped in the wake the 2016 peace deal with the former FARC rebel movement, as farmers were offered alternatives to growing coca bush.

But a United Nations report said new fields sprang up – often far away from major cities – and criminal groups moved into areas previously controlled by the disarmed opposition fighters.

No surprise there as the crop is an attractive proposition with the UN saying the potential production of cocaine has a value of 2.7 billion U.S. dollars in the local market.

And given that cocaine use is again increasing in rich countries, a drop in output is just one half of the problem.

The other half? The United States and other consuming countries will also have to work just as hard in curbing demand.