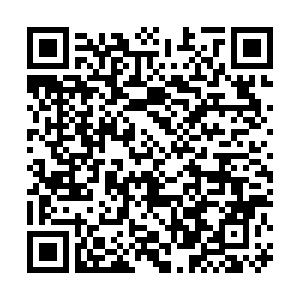 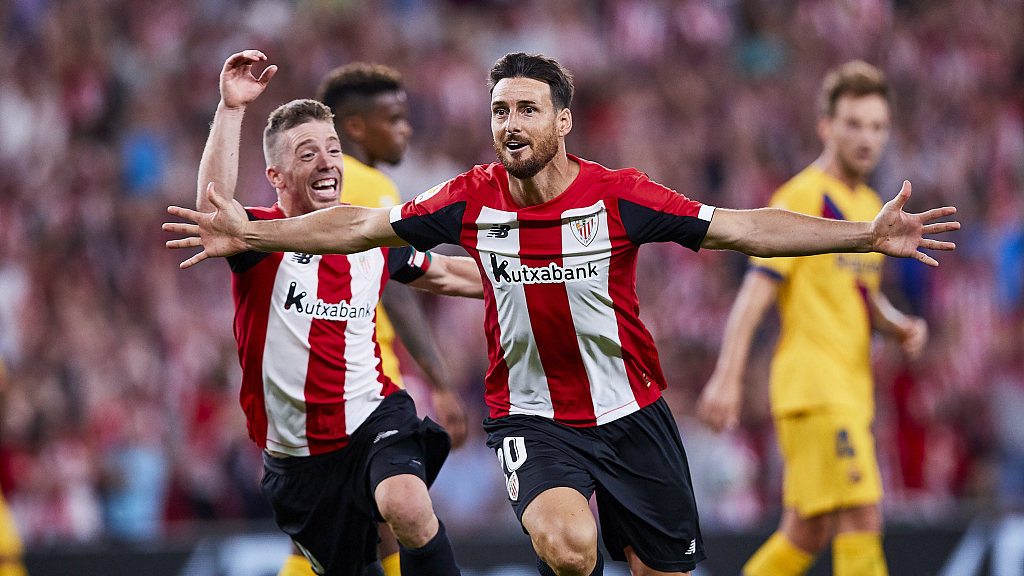 Barcelona made a nightmare start to the defense of their La Liga title on Friday by losing Luis Suarez to injury and then losing 1-0 to Athletic Bilbao, after a sensational late volley from substitute Aritz Aduriz.

Suarez hobbled off in the 37th minute with what looked like a calf injury before Aduriz came on in the 88th, the 38-year-old striker who has announced he will retire at the end of the season.

This was a spectacular start to the finale as Aduriz threw himself into the air and acrobatically volleyed past Marc-Andre ter Stegen to send San Mames wild on La Liga's opening night.

"The competition has put us in our place," said Gerard Pique afterwards. "We were not us."

Barca were already without Lionel Messi, who sustained a calf injury during pre-season, and before kick-off confirmed they were about to lose Philippe Coutinho, a loan deal "agreed in principle" with Bayern Munich, according to the club's director Guillermo Amor. 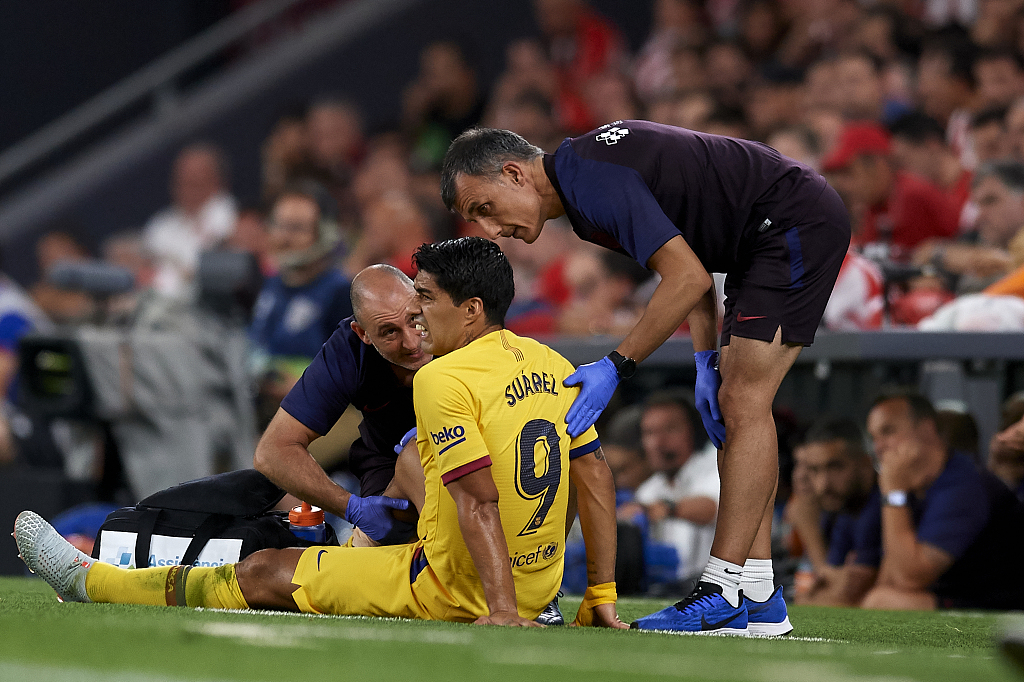 Luis Suarez#9 forced off with muscle injury in the first half. /VCG Photo

Luis Suarez#9 forced off with muscle injury in the first half. /VCG Photo

Suarez will undergo tests on Tuesday to diagnose the length of his absence but Messi's return, and perhaps negotiations for Paris Saint-Germain striker Neymar, might assume added urgency during his absence.

Antoine Griezmann will be expected to step up too but after joining from Atletico Madrid in July, he endured an underwhelming debut. Coutinho is evidence of the need for time to adjust.

Bilbao, who finished eighth last season, held Barca to a goalless draw in February and they were good value for another point until Aduriz intervened.

He has scored more than 200 goals in his 20-year career but perhaps none as memorable as this one. La Liga's first of the season may even prove to be its best.

"Sometimes football can be so beautiful," said Aduriz afterwards. "It will be impossible not to miss this but everything has a beginning and an end. I am incredibly grateful to be able to choose this ending." 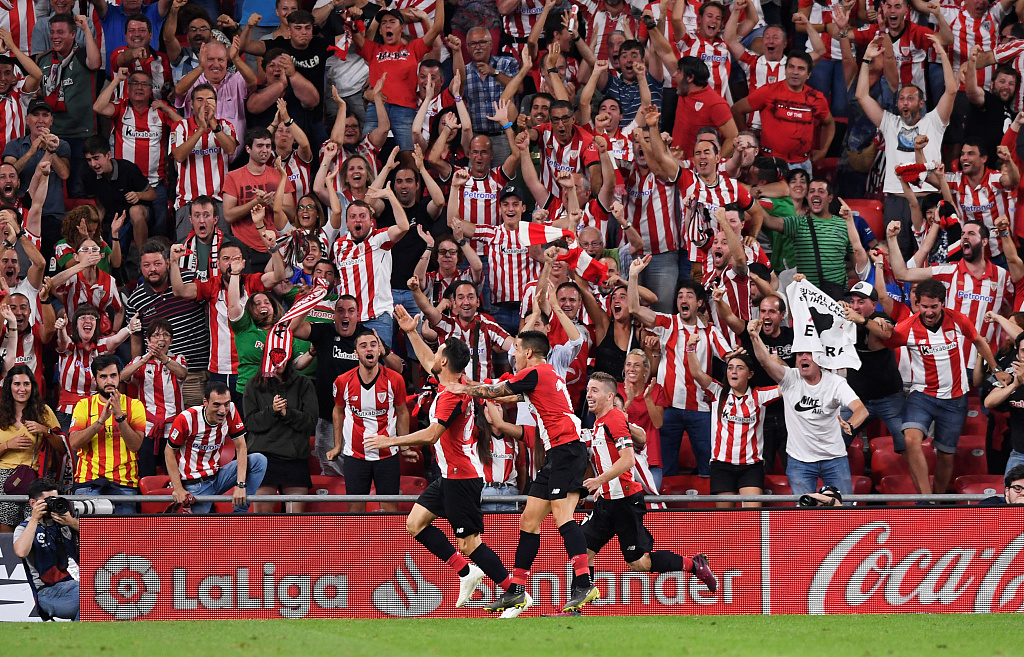 For Barca, there was at least the consolation of an excellent performance from Frenkie de Jong, also making his debut in place of Sergio Busquets.

De Jong fully justified his place with a serene display, seamlessly linking midfield to attack and dictating tempo with a maturity well beyond his 22 years.

By contrast, Griezmann never really settled after a nervous start, allowing a simple pass to slip under his foot before hacking late at the shin of Unai Lopez. 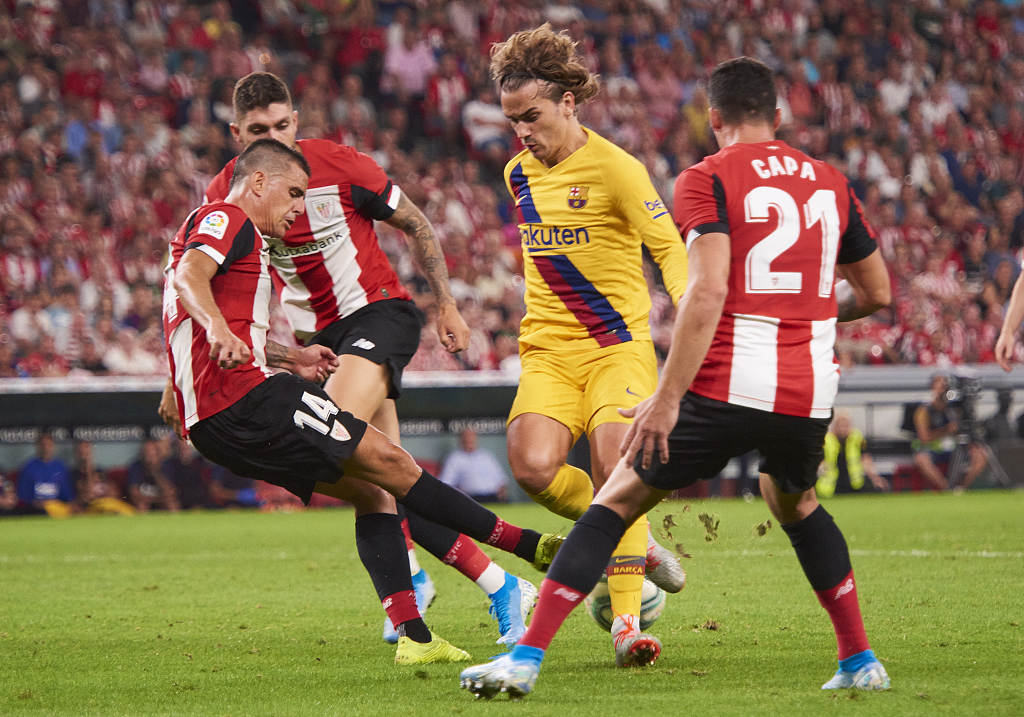 Inaki Williams, meanwhile, fresh from signing a nine-year contract last week, started fast, as he saw a rasping shot pushed wide and then skipped in behind Nelson Semedo but was again denied by Ter Stegen.

De Jong was tidy and composed but Barca were less controlled and their rhythm knocked further by Suarez departing shortly before half-time.

He had been testing his calf moments before, just as a poor header back landed perfectly in his path. Suarez shot first time but struck the post.

Raul Garcia failed to beat Ter Stegen from 10 yards while Rafinha, on for Suarez, went close, his curling effort brilliantly tipped onto the join between the post and crossbar by Unai Simon.

Ernesto Valverde put Ivan Rakitic on for Carles Alena at half-time and Rafinha again hit the post, this time freed by a cute reverse pass from Ousmane Dembele.

Bilbao seemed to tire and Barca turned the screw. Rakitic fired over as three Bilbao defenders leap in front of him but their opponents survived.

Carles Perez, the 21-year-old forward, came on for only his second league appearance but it was Bilbao's substitute that proved decisive.

A quick one-two down the right produced a looping cross into the box, where Aduriz did the rest.