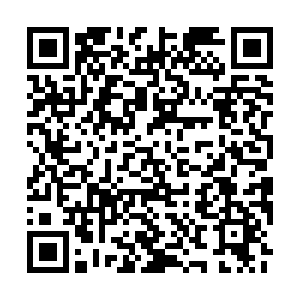 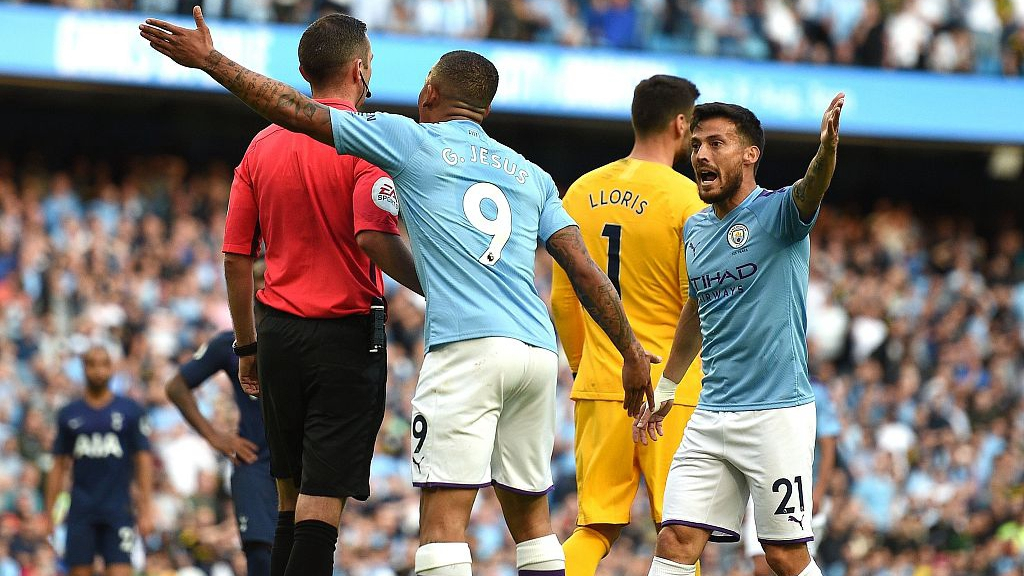 Manchester City were forced to settle for a 2-2 draw against Tottenham Hotspur after the Premier League champions were denied a dramatic winner by VAR, while Liverpool extended their perfect start to the title race with a 2-1 win at Southampton on Saturday.

Pep Guardiola's side failed to win for the first time in 16 Premier League matches following a controversial finish at the Etihad Stadium.

City thought they had stolen three points when Gabriel Jesus fired home in stoppage-time, but their celebrations were curtailed when a VAR review showed Aymeric Laporte had flicked the ball on with his arm.

The drama echoed Tottenham's Champions League quarter-final second leg triumph at City's expense last season when they went through on away goals after Raheem Sterling had a late goal ruled out by VAR.

City were in front in the 20th minute when Kevin De Bruyne's sublime cross was met by Sterling at the far post and the City winger headed back across Hugo Lloris for his fourth goal of the season.

But Tottenham hit back inside three minutes as Erik Lamela beat slow-to-react City keeper Ederson from the edge of the area. Manchester City's Raheem Sterling put his side ahead in their draw with Tottenham at the Etihad Stadium, August 17, 2019. /VCG Photo

Manchester City's Raheem Sterling put his side ahead in their draw with Tottenham at the Etihad Stadium, August 17, 2019. /VCG Photo

City's lead was restored in the 35th minute when Sergio Aguero glanced in a close-range finish from another pin-point De Bruyne cross.

However, after less than 20 seconds on the pitch as a replacement for Harry Winks, Brazilian forward Lucas Moura climbed higher than Kyle Walker to head Tottenham level from Lamela's corner.

Aguero exchanged angry words with Guardiola when he was substituted for Jesus, who was even more frustrated than his team-mate as he protested to the officials at the final whistle.

Calling for VAR's decision-making to be tweaked, Guardiola said: "I thought we left that situation in Tottenham in the Champions League last season. But it is the same. The referee and VAR disallow it. It's the second time, it's tough. "They have to fix it."

At St Mary's, Liverpool matched a club record of 11 successive Premier League wins to move two points clear of City as they built on last week's 4-1 thrashing of Norwich.

Jurgen Klopp's side took the lead in first half stoppage-time when Senegal winger Sadio Mane, who scored twice against Chelsea in the European Super Cup victory in midweek, returned to haunt his former club with an agile turn and curling strike into the far corner.

Roberto Firmino made it two with his 49th league goal for Liverpool, the Brazil forward taking Mane's pass, dribbling and then firing home in the 71st minute. 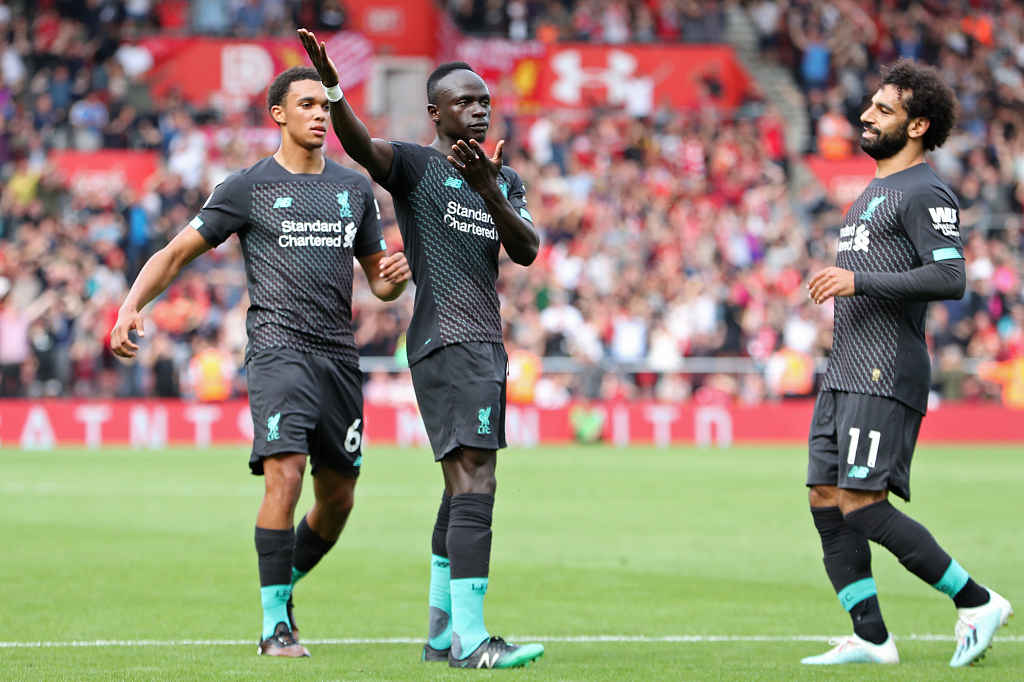 Liverpool goalkeeper Adrian started despite suffering an ankle injury when a fan slid into him during the celebrations against Chelsea in Istanbul.

But Adrian was guilty of a mistake in the 83rd minute when he hit a panicked clearance against Danny Ings, the ball bouncing off Southampton's former Liverpool striker into the empty net.

"I really loved how much respect we showed today," Klopp said.

"I said before the game that this looks like the biggest banana skin in history; Everybody is waiting for it and probably all the headlines were written already.

"I told the boys the headline I would prefer is 'the mentality giants were in town'. The boys did an outstanding job."

Pierre-Emerick Aubameyang was Arsenal's match-winner again as they beat Burnley 2-1 at the Emirates Stadium.

Gabon forward Aubameyang had netted the only goal in last weekend's victory at Newcastle and he emulated that crucial contribution with another decisive strike. 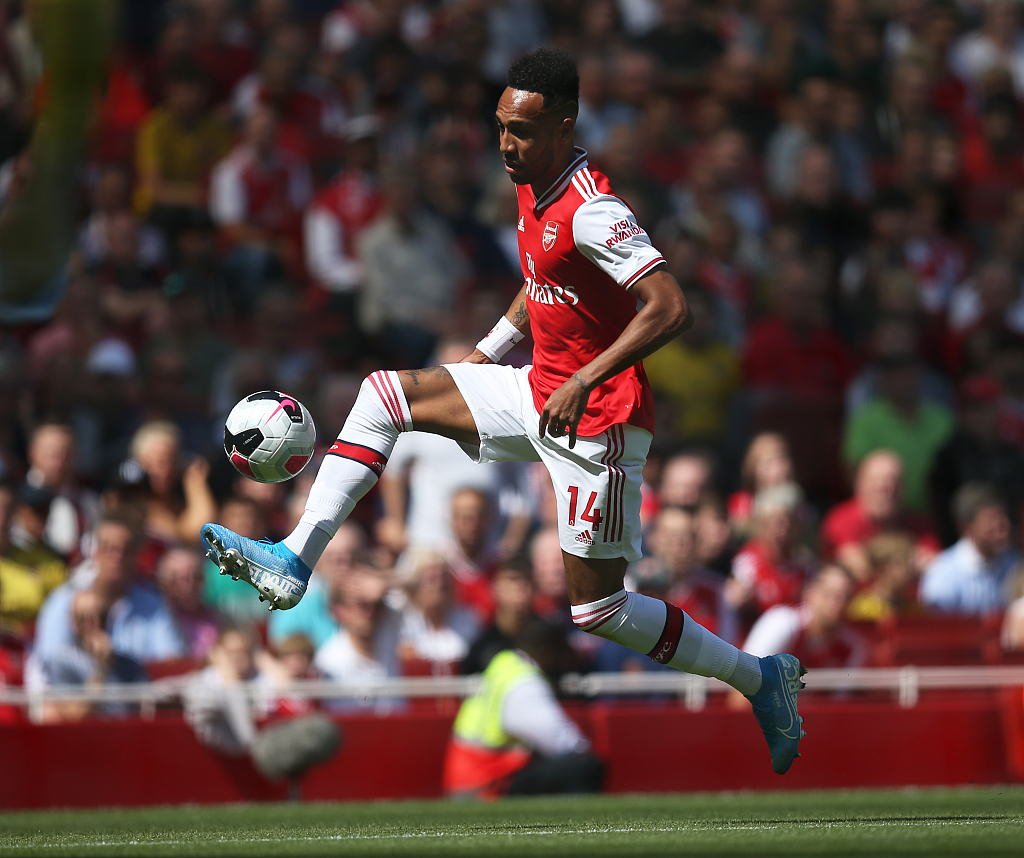 Aubameyang scored the winner as Arsenal beat Burnley to record successive victories at the start of a Premier League campaign for the first time since 2009. /VCG Photo

Aubameyang scored the winner as Arsenal beat Burnley to record successive victories at the start of a Premier League campaign for the first time since 2009. /VCG Photo

Alexandre Lacazette's first goal of the season had given Arsenal the lead before Ashley Barnes equalized for Burnley just before half-time.

With two successive wins to start the season for the first time in 10 years, the early signs are promising for Unai Emery's team ahead of sterner tests against Liverpool and Tottenham in their next two games.

"We worked together with an individual quality and capacity, but above all thinking like a team," said Emery.

Teemu Pukki hit a hat-trick as Norwich clinched their first win of the season with a 3-1 victory against Newcastle at Carrow Road.

Bournemouth condemned Aston Villa to a second consecutive defeat with a 2-1 victory, while Brighton drew 1-1 with West Ham.