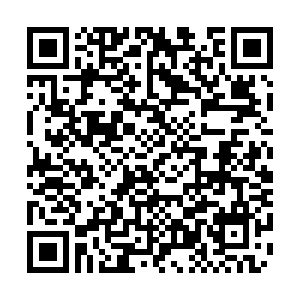 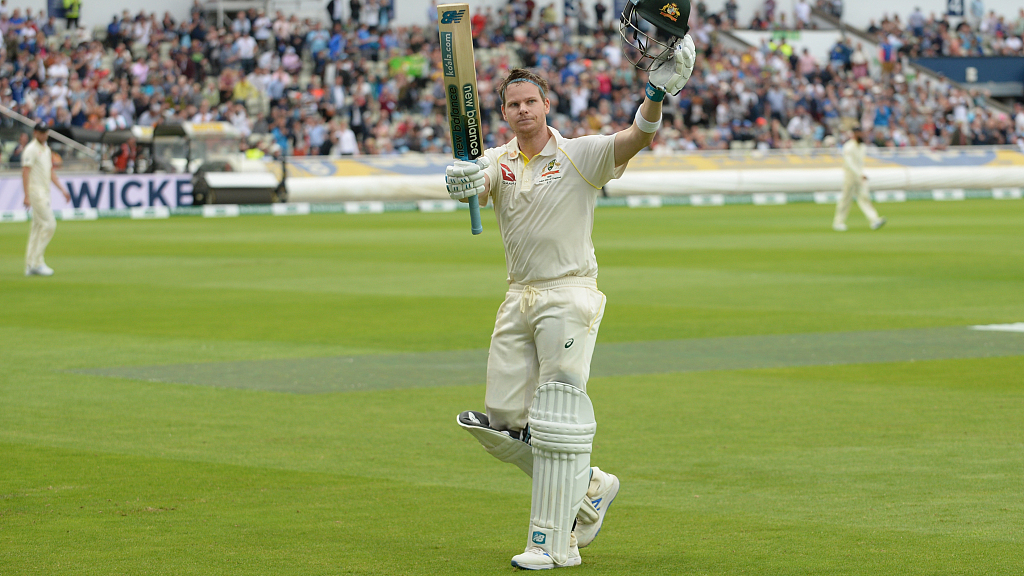 Steve Smith of Australia leaves the field after being dismissed during the first Specsavers Test Match between England and Australia at Edgbaston on August 1, 2019 in Birmingham, England. /VCG Photo

Steve Smith of Australia leaves the field after being dismissed during the first Specsavers Test Match between England and Australia at Edgbaston on August 1, 2019 in Birmingham, England. /VCG Photo

Steve Smith’s remarkable return across the perilous road to redemption brought a fresh display of heroics out of the Australian cricketer. He withstood a nasty blow on his neck in the fourth day of the second Ashes Test at the Lord’s cricket ground in London on Saturday.

Smith, who made 144 and 142 in Australia’s emphatic victory in the first test at Edgbaston to mark his return to test cricket after serving a one year ban following last year’s ball-tampering scandal, staved off a fearsome England attack once again and played the savior role for the Baggy Greens in their reply to the hosts' first-innings total of 258.

However, the most defining moment of his gritty innings came when he was batting on 80 and was hit on the neck by Test debutant Jofra Archer, who fired a fiery spell from the Pavilion End with his deliveries reaching speeds of over 90 miles per hour. Barbados-born Archer’s 92.4 mph (148.7 kph) delivery hit an unprotected part of Smith’s neck and knocked him down to the ground, forcing him to retire hurt after receiving on-field treatment. But much to the surprise of the Lord’s crowd, a feisty Smith returned to the crease just 46 minutes later and batted on. Even though he was booed by a section of the English crowd, known as the Barmy Army, while walking back towards the pavilion after suffering the hit, on his heroic return to the ground Smith received a standing ovation from the crowd at the home of cricket.

He was also struck on the arm by another Archer delivery, but the battered and the bruised batsman brought out his best by hitting Chris Woakes for successive boundaries on his valiant return. However, Smith’s daredevilry came to an end when he misjudged a straight ball from the same bowler and was adjudged lbw for 92. But that was enough to cut down England’s first-innings lead to just eight runs. 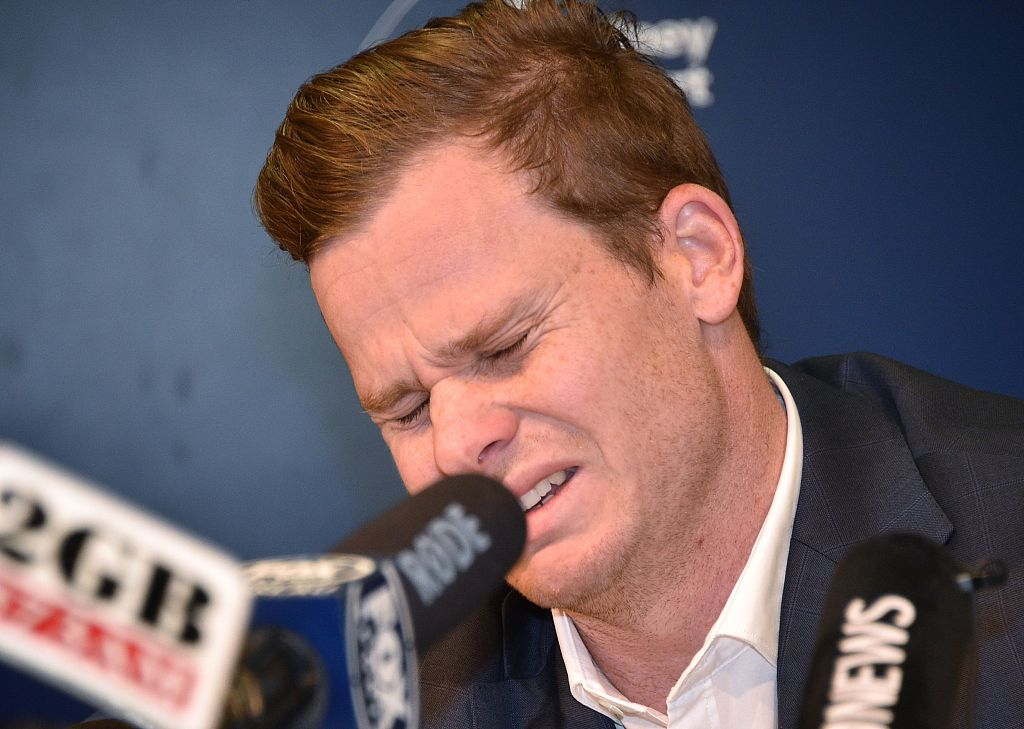 Cricketer Steve Smith reacts at a press conference at the airport in Sydney on March 29, 2018, after returning from South Africa. /VCG Photo

Cricketer Steve Smith reacts at a press conference at the airport in Sydney on March 29, 2018, after returning from South Africa. /VCG Photo

In their statement on Smith’s injury, Cricket Australia (CA) said, “Steve was hit on the neck below the left ear. He was assessed lying on the pitch at the instructions of team doctor Richard Shaw.” “Dr. Shaw made the precautionary decision to remove Steve from the field of play to have him further assessed under Cricket Australia's head impact protocol. Steve then passed his assessments and will now be monitored on an ongoing basis, as is routine,” they added.

Smith, however, did not come out to field at the start of England’s second innings as the CA informed that he had suffered a bruised left forearm and had gone for a precautionary X-ray.

Incidentally, Smith’s former teammate and former Australian opener Phillip Hughes died after being struck by a bouncer in the neck during a first-class match in Sydney in 2014. Significantly, an additional stem guard neck protection was introduced following the fatal tragedy but on Saturday, Smith was wearing a helmet without the safety equipment.

Australian coach Justin Langer said, “It's hard to watch, he's in good spirits tonight and he passed all the concussion protocol.” Langer mentioned, “He (Smith) just doesn't feel right (wearing a stem guard).” “I know they came in after the tragedy of Hughesy. He might rethink it now after seeing what happened today, but you'd have to ask him that,” the 48-year-old remarked.

Interestingly, it was the seventh Ashes innings in a row that Smith, who was stripped of his captaincy after the Sandpapergate saga, has passed fifty, a record in Ashes history.

Smith’s bravery was followed by Aussie pacer Pat Cummins blazing spell as he grabbed two early wickets, including dismissing England captain Joe Root for a golden duck, to help the tourists restrict England for 96-4 with an overall lead of just 104 runs in the second innings.

Meanwhile, Australia's cricket union came down heavily on the English fans at Lord’s for booing Steve Smith after he was felled by the Archer bouncer. The Australian Cricketers' Association (ACA), which represents the players Down Under, stated, “Cricket deserves much better than that. And Lord's, the home of cricket, deserves much better than that also.” ACA president Greg Dyer and chief executive Alistair Nicholson wrote in a joint statement, “What we witnessed was bravery from an outstanding young man. It should be commended not vilified. Over the English summer, generally, the crowds have been terrific and really added to the contest. But when someone is hurt, yet the boos continue, it's time to call ‘enough’.” A slew of former Australian greats also condemned the behavior with former wicket-keeper Ian Healy calling it “disgusting” while former skipper Mark Taylor dubbed it as “very disappointing”.