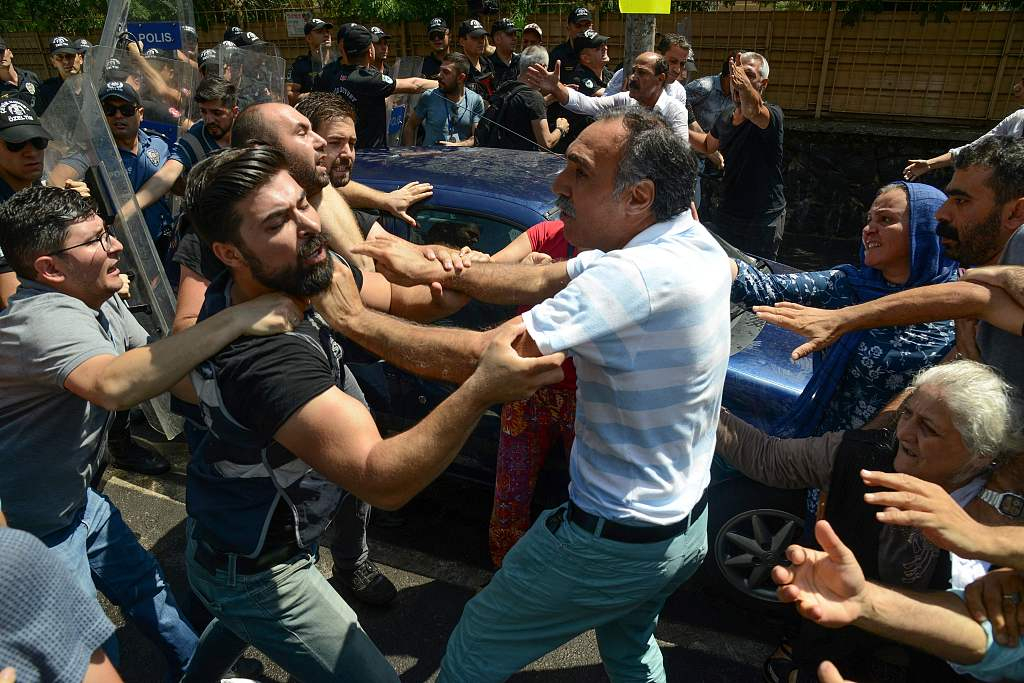 Demonstrators clash with Turkish police officials as they protest against the replacement of Kurdish mayors with state officials in three cities, Diyarbakir, Turkey, August 19, 2019. /VCG Photo

Demonstrators clash with Turkish police officials as they protest against the replacement of Kurdish mayors with state officials in three cities, Diyarbakir, Turkey, August 19, 2019. /VCG Photo

Turkish authorities have sacked three mayors and arrested over 400 people in the southeast of the country.

The Ankara-based Anadolu news agency reported on Monday that mayors of Diyarbakir, Mardin and Van provinces, Adnan Selcuk Mizrakli, Ahmet Turk and Bedia Ozgokce Ertan respectively, have been removed from their posts over alleged links to the outlawed Kurdistan Workers Party (PKK). All three, elected to office in March, are the members of the People's Democratic Party (HDP).

In a statement, the Turkish Interior Ministry, confirming a total of 418 arrests, claimed the suspended mayors "had been proven to be engaged and affiliated with terrorist organizations" adding that municipalities in the Kurdish southeast had become "logistical centers … for supporting terrorist activities."

The HDP has described the arrests as "a new and clear political coup (which) constitutes a clearly hostile move against the political will of the Kurdish people."

The three mayors will be replaced by provincial governors appointed by Turkey's ruling Justice and Development Party (AKP). In Diyarbakir, the largest city in the southeast, the incumbent Hasan Basri Guzeloglu addressed crowds on Monday promising to be a "just" mayor.

Condemnation has been swift across Turkey's political divide. The new mayor of Istanbul Ekrem Imamoglu, who represents the main opposition Republican People's Party (CHP), stated on Twitter: "Ignoring the will of the people is unacceptable." Imamoglu was himself removed from his elected post following contested results in the March poll for the Istanbul mayoralty."

Monday's arrests are likely to cause further disarray in Turkey's hopes for a peaceful resolution to its decades-old Kurdish conflict. Expectations of a possible breakthrough were boosted in June 2015 when a surprise result in the general election saw the HDP win 13 percent of the votes and 80 seats in parliament, denying the AKP its overall legislative majority.

The HDP, which has denied links to the PKK, has previously attempted to broker talks between the state and Kurdish paramilitaries. However, negotiations collapsed in July 2015 when a suicide bombing by ISIL militants cost the lives of 32 young left-wing activists in the town of Suruc.

The group had been traveling to the Kurdish majority town of Kobane in northern Syria to assist in reconstruction efforts. The PKK, blaming the Turkish government for complicity in the attack, resumed its military campaign with a series of tit-for-tat attacks and bombings that have claimed over 4,000 lives including those of civilians.