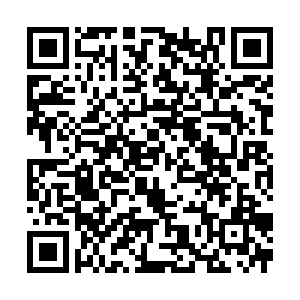 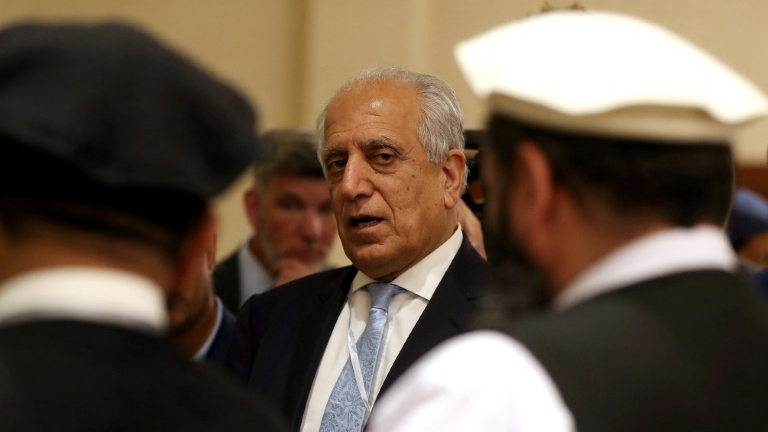 The United States envoy negotiating with the Taliban for an end to nearly 18 years of fighting in Afghanistan was departing Tuesday for Qatar to resume talks, the State Department said, amid concerns about a growing threat by an ISIL affiliate.

Zalmay Khalilzad will also visit with the Afghan government, which has been sidelined from the talks, to discuss the "peace process and encourage full preparation for intra-Afghan negotiations," the U.S. said.

In Washington, U.S. President Donald Trump told reporters he believes the Taliban insurgents are eager to stop fighting and that they could "very easily" prevent Afghanistan from being a breeding ground for terrorism. The U.S. will, nonetheless, keep a close eye on Taliban influence, he said, even as it thins its troop presence.

The new talks in Qatar come after a horrific suicide bombing at a wedding in Kabul over the weekend. The blast, claimed by the ISIL affiliate that has emerged as a brutal threat in recent years, led outraged Afghans to question whether a U.S.-Taliban deal would mean peace for long-suffering civilians.

Afghanistan was the world's deadliest conflict in 2018, and the United Nations has said more civilians died last year than in the past decade. Afghan officials have said Saturday's bombing killed more than 63. Over 32,000 civilians have been killed in the past 10 years. 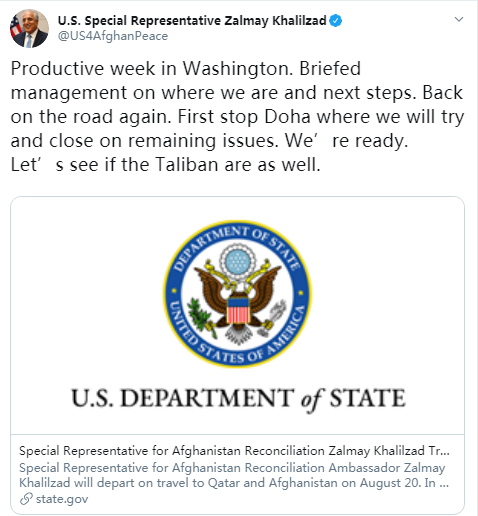 The Pentagon's special inspector general for Afghanistan, meanwhile, reported Tuesday that the conflict remains largely a stalemate, with the Taliban unable to expand their territorial holdings and the Afghan government forces unable to reclaim lost land.

"The available measures of security indicated little change in the violence during the quarter," a report said, referring to the April-June period.

Some 14,000 U.S. troops remain in Afghanistan, and their withdrawal is a central part of the U.S.-Taliban talks. Some analysts have warned, however, that Trump's eagerness to bring at least some troops home ahead of next year's election could weaken the U.S. stance in the negotiations as the Taliban might see little need to make significant concessions.

The U.S., for its part, seeks Taliban guarantees that Afghanistan, which hosted Al-Qaida and its leader Osama bin Laden before the 9/11 attacks, will not be used as a launch pad for global terror assaults.

Both Khalilzad and the Taliban earlier this month signaled they appeared close to an agreement, and Trump was briefed on the talks with his national security team on Friday.

Intra-Afghan talks on the country's political future are expected to follow an agreement, though the Taliban has refused so far to negotiate with the Afghan government, dismissing it as a U.S. puppet. The insurgent group now controls roughly half of Afghanistan and is at its strongest since its 2001 defeat by a U.S.-led invasion. 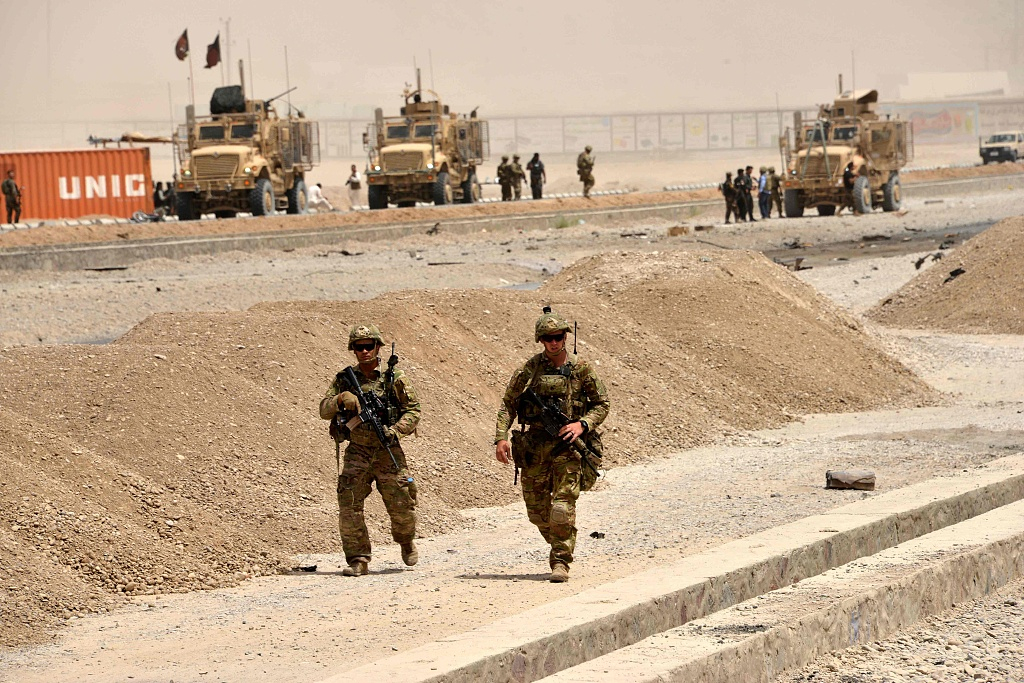 U.S. soldiers walk at the site of a Taliban suicide attack in Kandahar, August 2, 2017. /VCG Photo

U.S. soldiers walk at the site of a Taliban suicide attack in Kandahar, August 2, 2017. /VCG Photo

Khalilzad has expressed interest in a deal by September 1, less than a month before Afghanistan's presidential election. The uncertainty around the talks has led many Afghans, including some candidates, to question whether the vote will occur.

Afghanistan President Ashraf Ghani, stung at being left out of the talks, has insisted the election is needed to give the government a strong mandate to deal with the Taliban.

Meanwhile on Tuesday, hundreds of people gathered in mosques in Kabul for memorials for scores of people killed in the weekend bombing. Even in mourning, fears of a follow-up attack were high as armed community self-defense forces stood on guard.

Some mourners criticized the Afghan government.

"They should apologize to the people for not bringing security" to the country, said Zia Mohammad, a relative of one victim. He called on Ghani to resign.

The Associated Press has learned of additional deaths in the attack that were not included in the toll announced by Afghan officials, but officials on Tuesday would not comment. 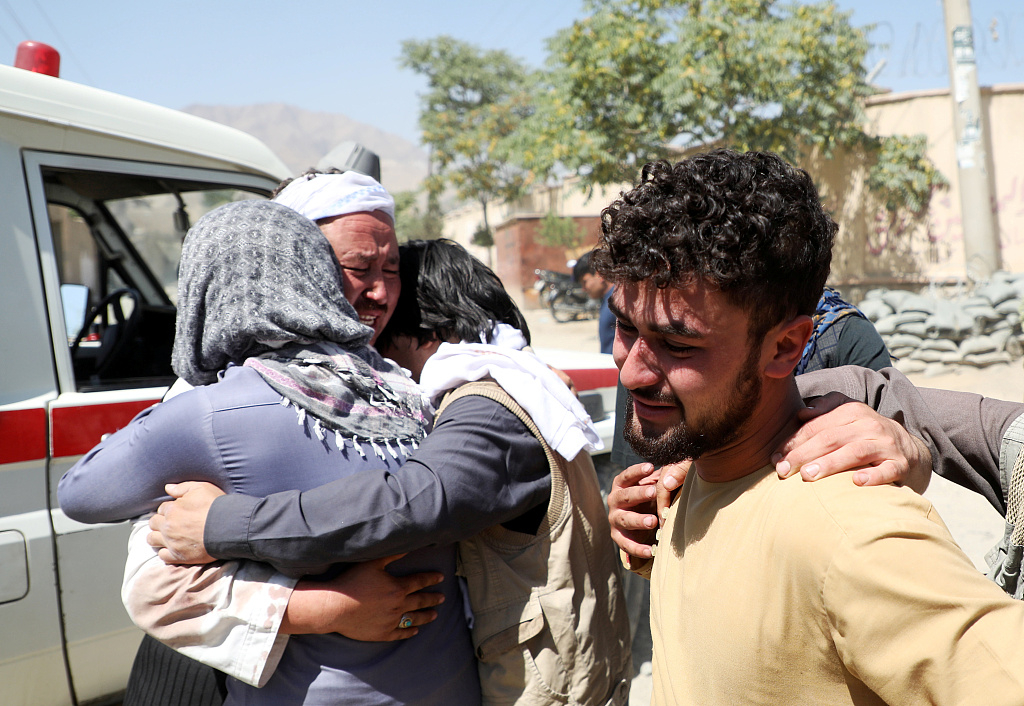 Afghan men comfort each other as they mourn during the funeral of their relatives after a suicide bomb blast at a wedding in Kabul, Afghanistan, August 18, 2019. /VCG Photo

Afghan men comfort each other as they mourn during the funeral of their relatives after a suicide bomb blast at a wedding in Kabul, Afghanistan, August 18, 2019. /VCG Photo

Nearly 200 people were wounded in the blast, Afghan officials have said.

Afghanistan's minority Shiite Hazara community, targeted in the bombing, feels especially vulnerable. The ISIL affiliate which emerged in Afghanistan in 2014 has launched several large-scale attacks on minority Shiites, who it views as apostates deserving of death.