Why is the National Endowment for Democracy fueling Hong Kong protests?
Keith Lamb 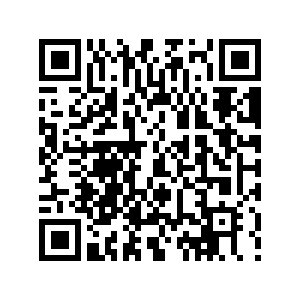 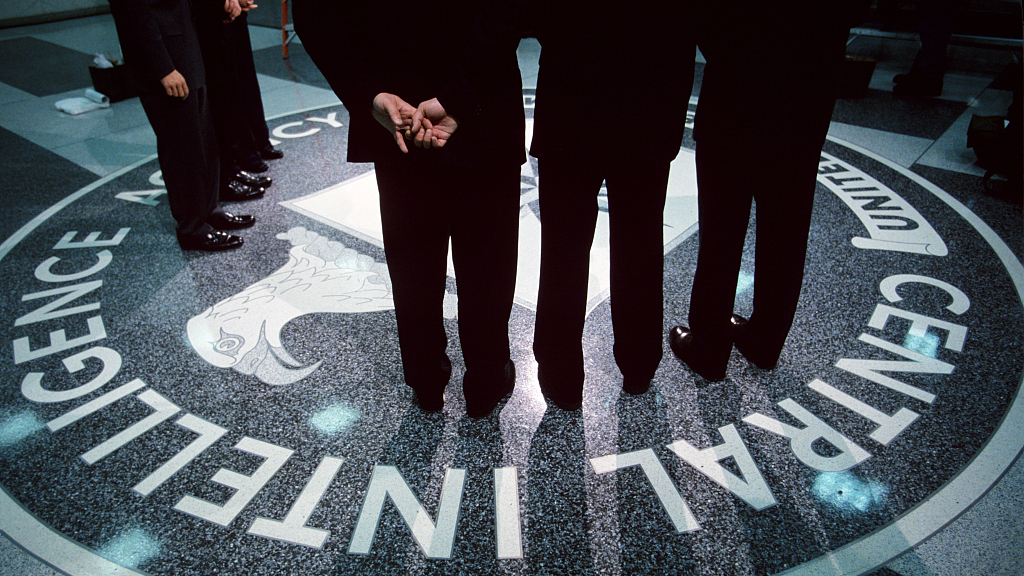 Editor's note: Keith Lamb is a University of Oxford graduate with a MSc degree in Contemporary Chinese studies. His primary research interests are international relations of China and China's "Socialism with Chinese characteristics." The article reflects the author's opinion, and not necessarily the views of CGTN.

It's no secret that there are powerful forces in the U.S. that support the Hong Kong protests. U.S. Secretary of State Mike Pompeo, Vice President Mike Pence and House Speaker Nancy Pelosi have all publicly waded in on the side of anti-Beijing protesters. Senior U.S. diplomat Julie Eadeh has been caught meeting the "pro-democracy" activists.

Out of the spotlight, active U.S. interference takes place through the National Endowment for Democracy (NED). The NED is bankrolling Hong Kong "pro-democracy" and anti-Beijing groups such as the Solidarity Center (SC), the National Democratic Institute (NDI) and Hong Kong Human Rights Monitor to the tune of millions. In 2018 alone the NED reports giving 155,000 U.S. dollars to the SC and 200,000 U.S. dollars to the NDI.

The NED is a sham NGO founded in 1983 to replace functions previously carried out by the CIA. Philip Agee, a former CIA agent and author of "Inside the Company: CIA Diary" details how the CIA would set up front organizations and funnel money into destabilization campaigns.

After destabilization would come the coup-d'etat. The Brazilian 1964 coup that overthrew President João Goulart and the Chilean 1973 coup against Chilean President Salvador Allende were both backed by the CIA. In both instances, left-wing parties were deposed and replaced by right-wing military forces compliant to U.S. interests. 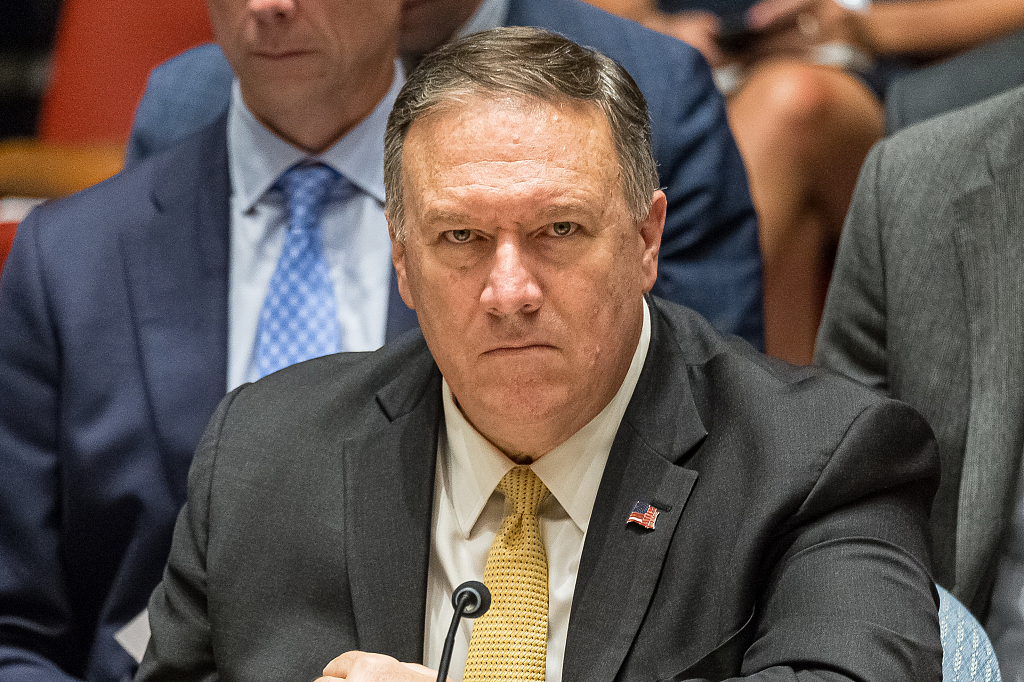 U.S. Secretary of State Mike Pompeo was previously the director of the CIA. /VCG Photo

U.S. Secretary of State Mike Pompeo was previously the director of the CIA. /VCG Photo

In today's world of espionage using the CIA to fund "independent" groups would lead to accusations of imperialism. Consequently, the funneling of money and the setting up of front organizations go through the NED.  According to Allen Weinstein, who was responsible for setting up the NED during the Reagan administration: "A lot of what we do today was done covertly 25 years ago by the CIA."

Nicolas Guillhot from the Centre National de la Recherche Scientifique says the NED creates "a non-governmental crusade for human rights and democracy which avoided accusations of imperialism by presenting itself as a direct response to the needs of dissidents and reformers worldwide."

The Department of State funds the NED. As such, the NED must act in accordance with U.S. geopolitical aims. For example, the NED's president must appear before the U.S. Senate Foreign Relations Committee every year to account for its activities.

The NED has continued the CIA's work to further U.S. interests abroad. In this game, democracy and the vague language of freedom is merely instrumental. William Blum, author of "Killing Hope: U.S. Military and CIA Interventions Since Word War II," describes how the NED had successfully manipulated elections in Nicaragua in 1990 and Mongolia in 1996 and how it helped to overthrow democratically-elected governments in Bulgaria in 1990 and 1992.

In recent history, in 2018 nearly 1,000,000 U.S. dollars was proportioned to Bolivia for funding think tanks, news agencies and political parties. This funding is for the purpose of thwarting Evo Morales, who nationalized Bolivia's gas reserves.

In Hong Kong, the NED continues its global crusade to work against any opposition that might challenge U.S. global dominance. China's developmental success has lifted hundreds of millions out of poverty and led to a burgeoning technological prowess. China's model provides an example to the developing world on how to escape the disasters wrought on them by both colonialism and the neo-colonialism of the Washington consensus. 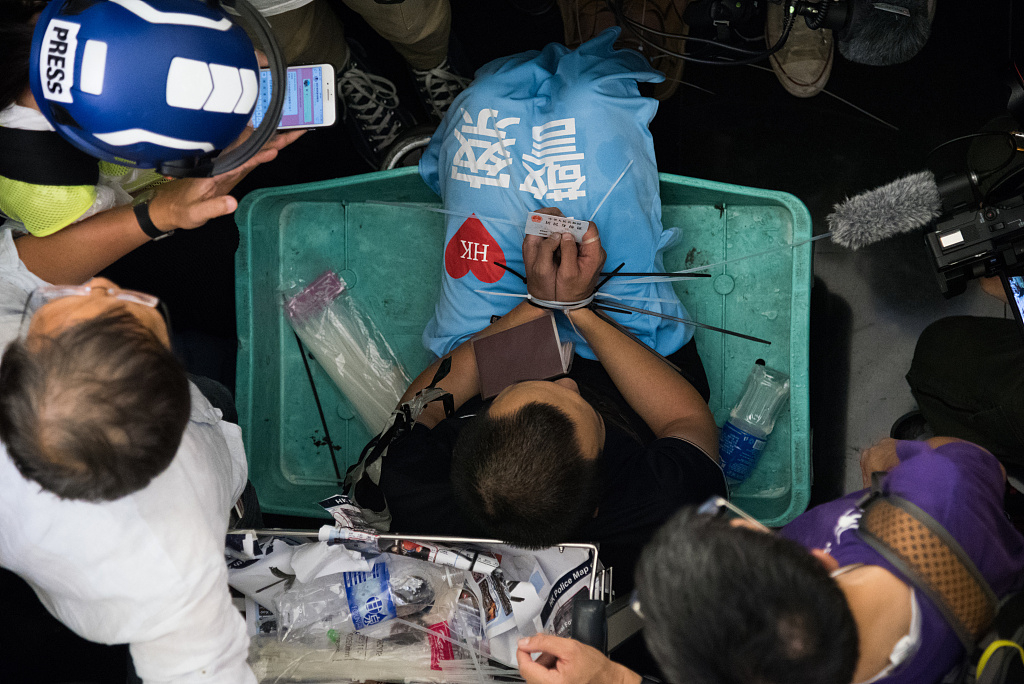 Protests in Hong Kong have deteriorated to the point where a reporter from Global Times, Fu Guohao, was tied up and beaten by the protesters, August 13, 2019. /VCG Photo

Protests in Hong Kong have deteriorated to the point where a reporter from Global Times, Fu Guohao, was tied up and beaten by the protesters, August 13, 2019. /VCG Photo

China's philosophy is one not of dominating the world but pursuing win-win outcomes. Beijing builds infrastructure; it doesn't bomb infrastructure. As other countries develop, they also become more powerful. Greater power to the developing world means a more democratic world.

A world where the U.S. has to share power with others is intolerable to Washington, which sees the rise of others in zero-sum terms. Consequently, China has been labeled a peer competitor to be subdued.

In the long run, the U.S. would like to divide China to prevent its rise. Hong Kong is a pawn in this game. However, the U.S. knows very well that Beijing will never allow Hong Kong to become independent.

Instead, the U.S. hopes to achieve both short and medium-term aims both linked to hampering China. In the short run, the NED funding of anti-Beijing groups can be used as a bargaining chip in the Sino-U.S. trade war. Trump's tweets last week saying, "Of course China wants to make a deal. Let them work humanely with Hong Kong first!" hint at this intention.

In the medium term, Washington hopes the prolonging of protests will lead to Carrie Lam to call on Beijing to enforce military discipline to restore order in Hong Kong.

Calling the military to bring order to the streets of Hong Kong would neither be unlawful within the parameters of China's "One Country, Two Systems," nor could one say Beijing and the Hong Kong SAR weren't patient considering the U.S., as demonstrated in Ferguson, Missouri, was quick to use a heavy-handed option to put down relatively minor disturbances.

Nevertheless, the U.S. would publicly chastise Beijing while delighting privately. It would lever the situation to its own propaganda needs and unfairly label Beijing's actions as going against China's "One Country, Two Systems," which would in turn influence the upcoming election in the Taiwan region.