A taste of Xinjiang at Kashgar's night market
CGTN 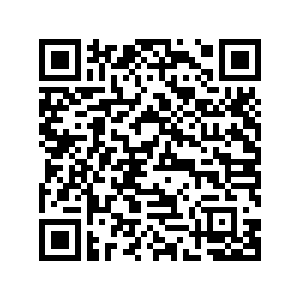 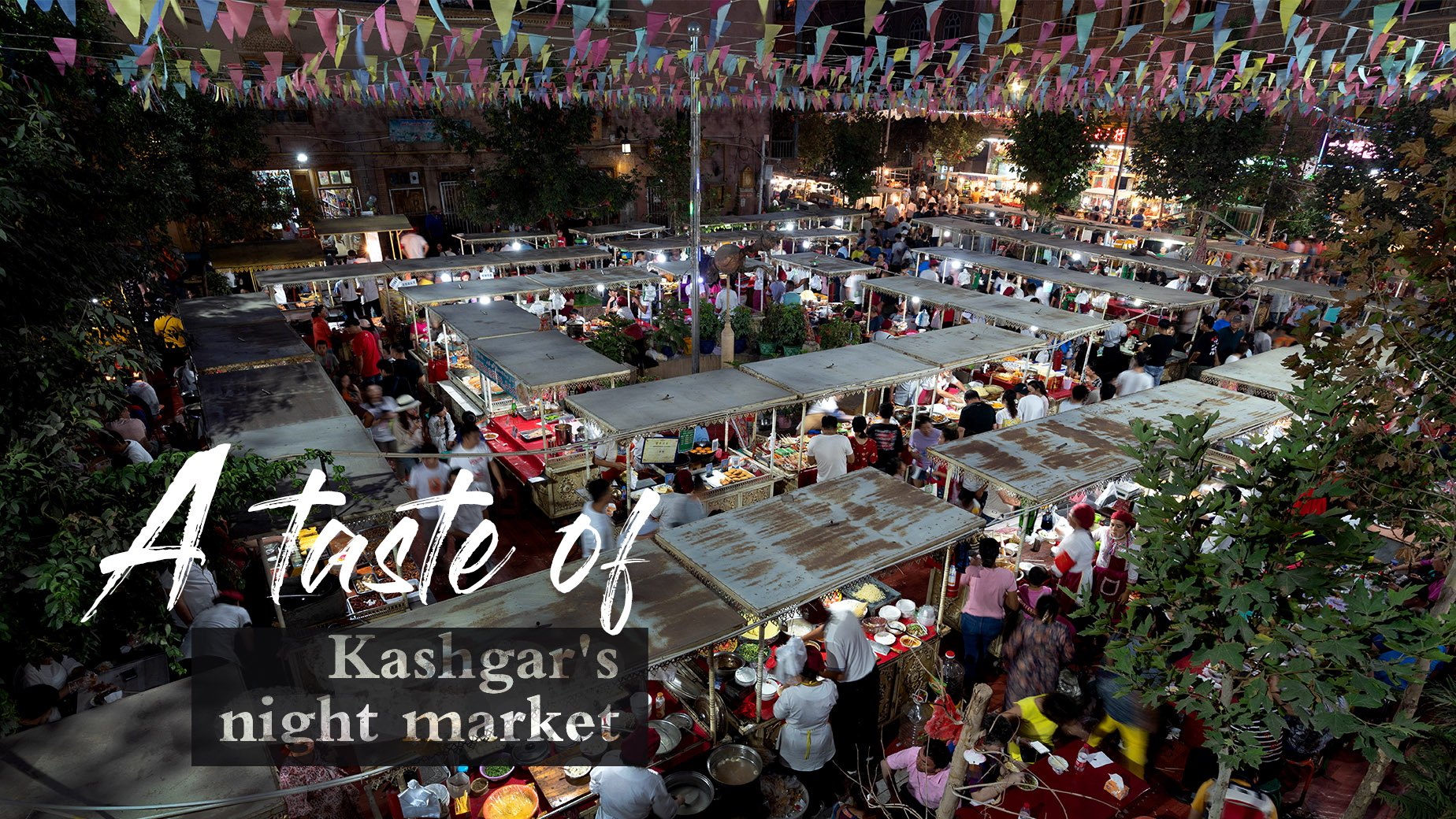 You will never know the real Xinjiang if you've never been to Kashgar, and a journey to Kashgar is never complete without savoring its local specialties. As one of the best cities to sample authentic Xinjiang cuisine, Kashgar is noted for its diversified food culture.

Opposite the Id Kah Mosque in Kashgar's old town lies the Haan Bazaar. When the evening closes in, the twilight marks the beginning of a culinary adventure. The market draws in large crowds of locals and visitors to fulfill their inner foodie desires.

Here are some must-try dishes in Kashgar's food paradise:

It's impossible to imagine the local diet without mutton and lamb. From smoke-grilled kebabs to whole roasted lambs, meat lovers simply can't resist the temptation. There are quite a few kebab stalls at the night market, filling the streets with lamb-laden curls of smoke. 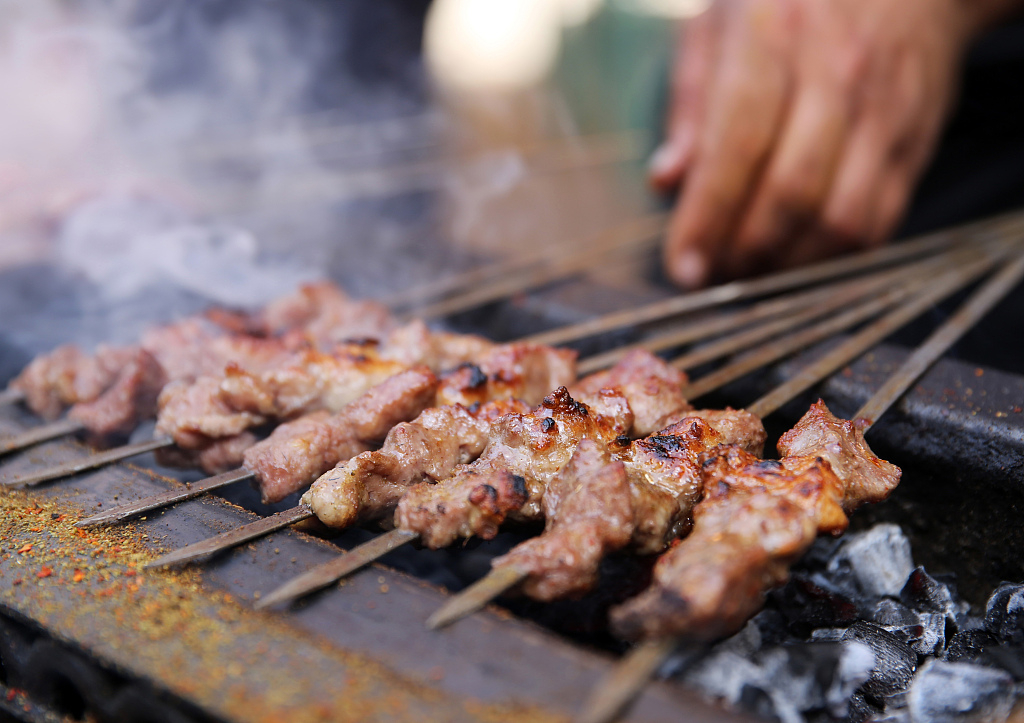 Small pieces of lamb are grilled on skewers over charcoal with various spices sprinkled on them to add flavors. Visitors are drawn by the captivating smell from a distance. When they have their first bite, the tender and juicy meat creates a lingering taste in their mouths.

Tip: Clean the tips of the skewers before eating.

Naan is a staple food for Uygurs. The bread is made from plain ingredients including flour, milk, salt and sugar, but it conjures up a host of wonderful sensations. 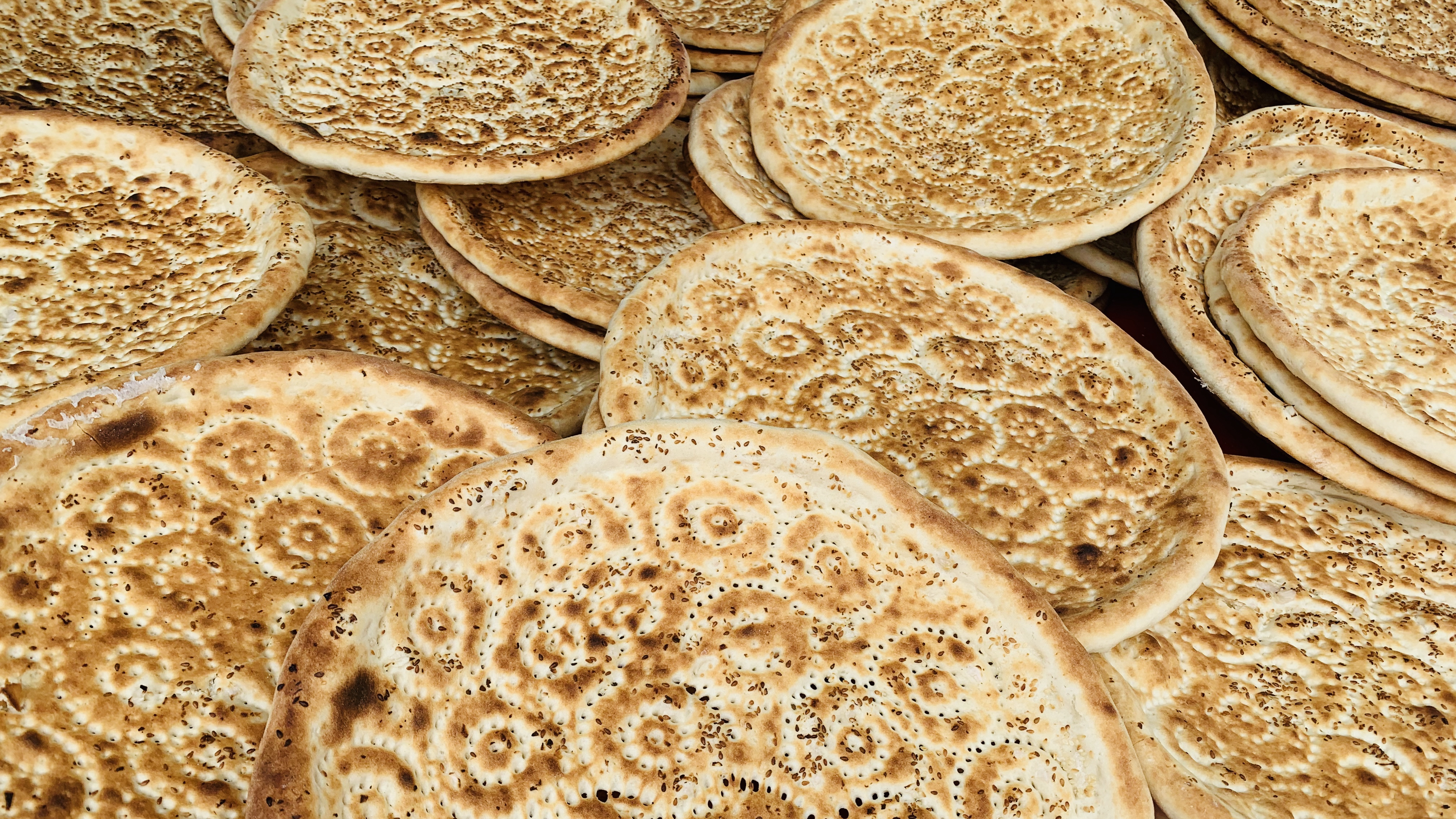 It comes in different sizes and shapes, typically round, with distinctive flavors. Grab a freshly-baked one, tear it off, and you'll find it surprisingly tasty compared with how it looks. The surface is slightly crispy and the texture inside is quite soft.

Don't underestimate the power of the humble-looking bread. These discs can last for a month or two. Many visitors can't help but bring some home when their journey ends. 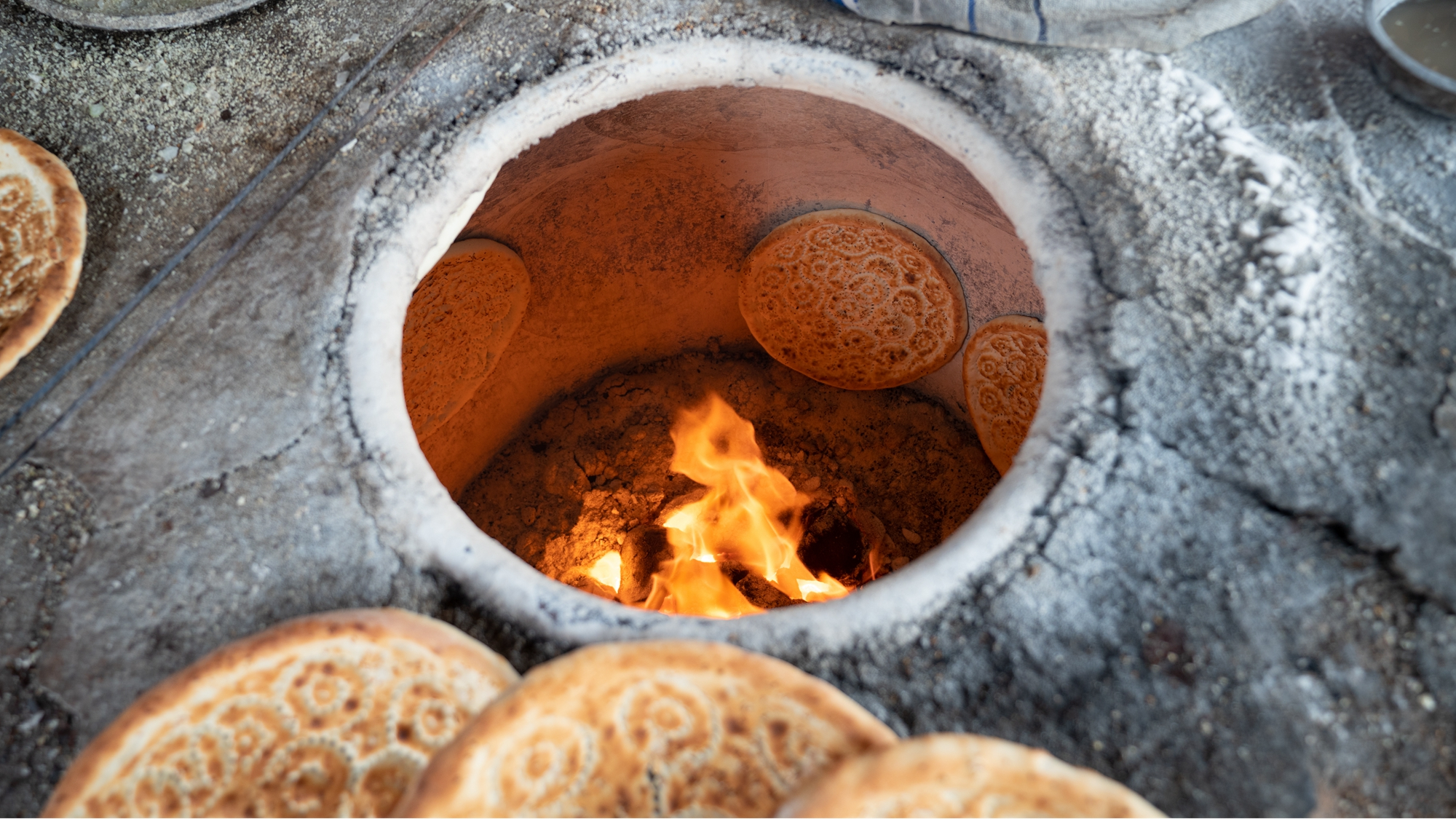 Naan bread is cooked by sticking the dough on the wall of a naan pit. /CGTN Photo

Naan bread is cooked by sticking the dough on the wall of a naan pit. /CGTN Photo

Locally called Dogh or Baobing in Mandarin, it is a delicious mix of shaved ice, honey and yogurt. There is nothing better than sweet and freezing dogh as a summer treat or an after-meal dessert.

The large block of ice is often the center of attention. The master shaves the ice off an ice block and tops it with yogurt and honey. The ingredients are then tossed high in the air so that they mix together. 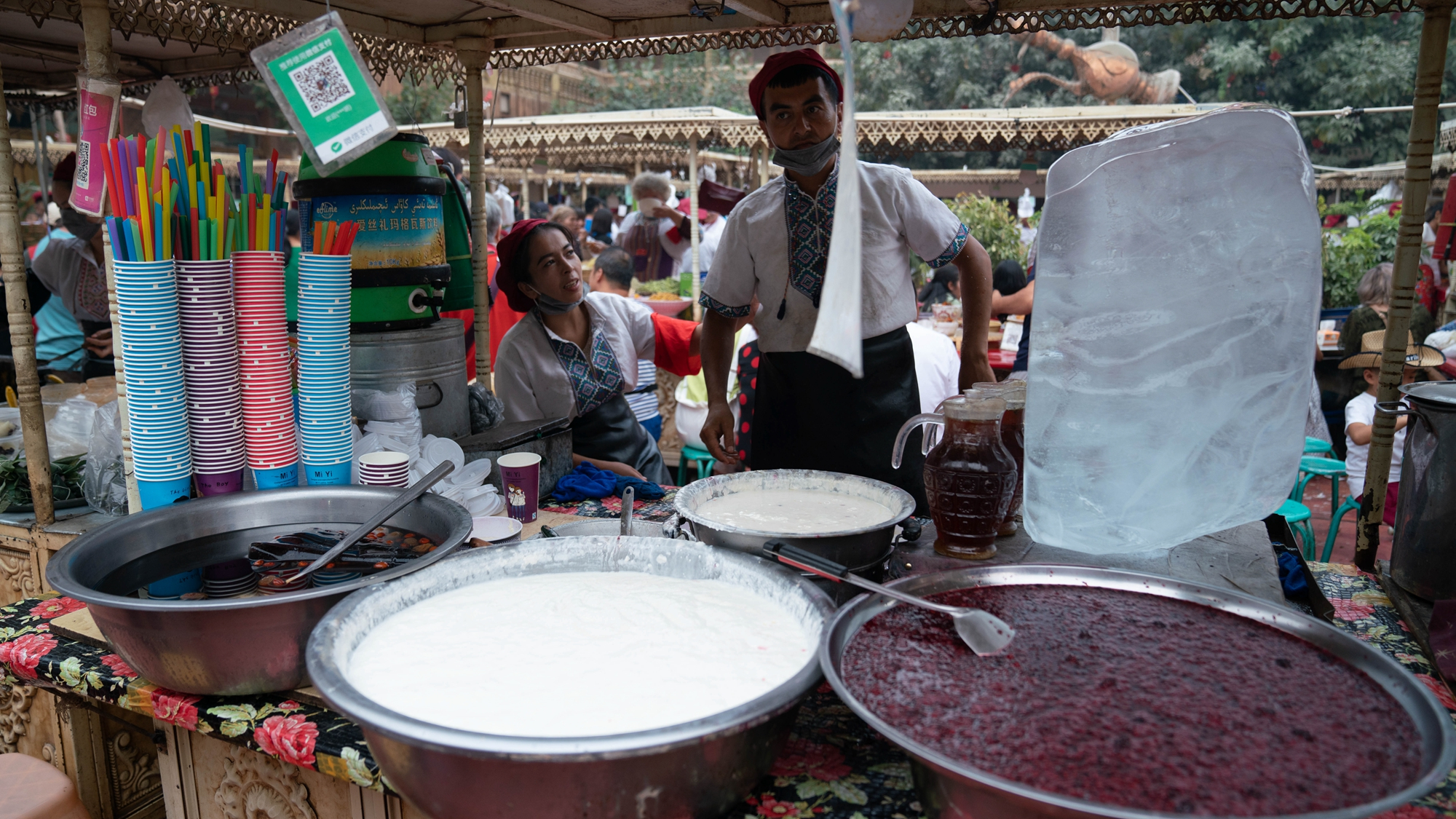 You might be interested in where the giant block of ice comes from. They are retrieved from frozen rivers running down the snow-capped mountains in winter. They are then stored in ice cellars to keep them from melting. When summer approaches, they are ready for numerous cups of refreshing iced yogurt.

Opke Hessip is a traditional snack favored by locals. The mere sight of it stimulates the curiosity of many passersby.

Served with lamb lungs and rice-stuffed intestines in soup, it is something definitely worth a try. The intestines are soft and the rice inside is glutinous. 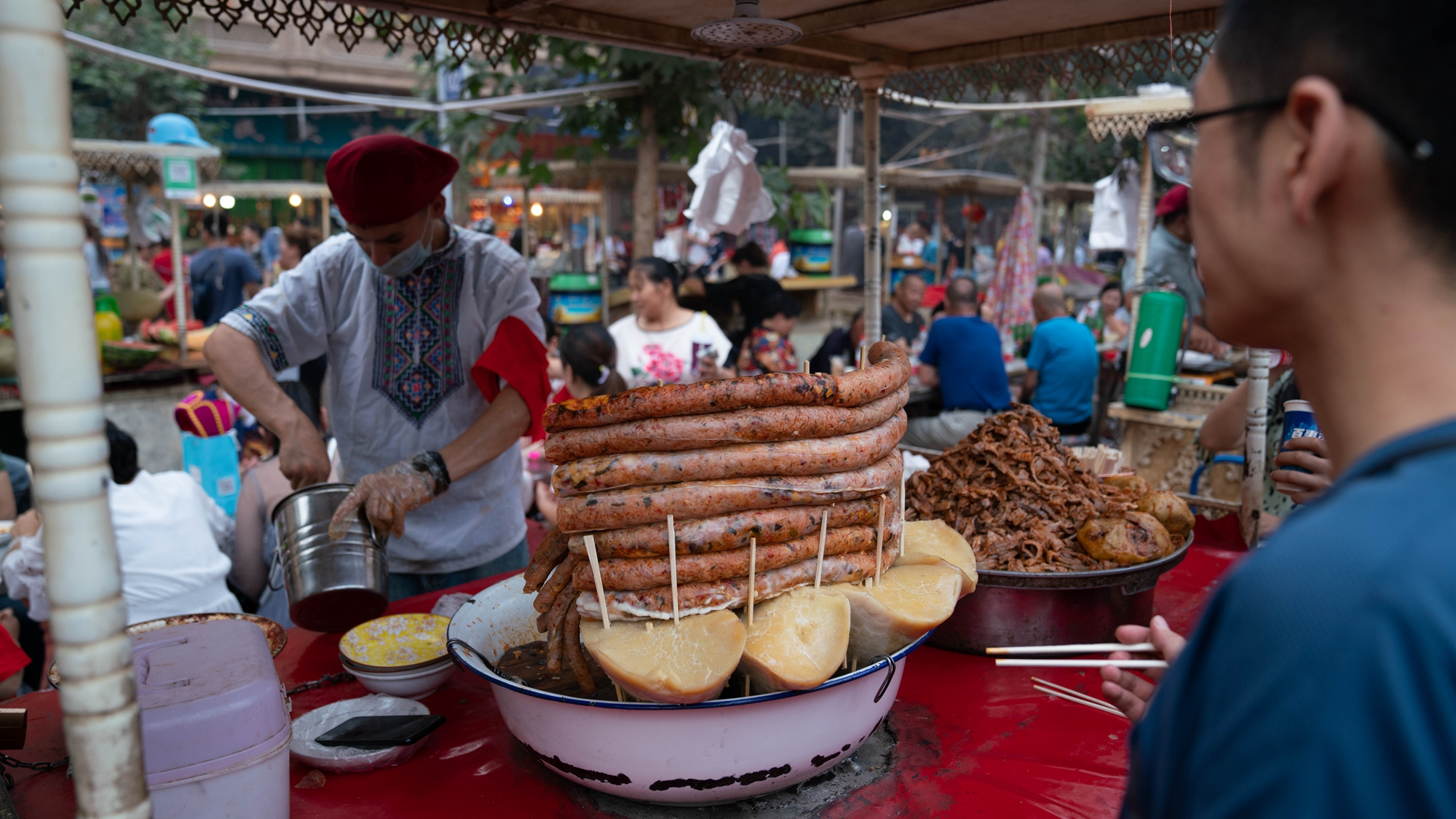 It's recommended to spend a couple of nights in Kashgar to fully explore some of its local specialties at the night market. A walk through the bustling stalls brings you the authentic flavors of Kashgar.

Tip: There is no need to bring cash as each food stall provides online payment, either via WeChat Pay or AliPay.