In The Spotlight: 'Earth's lungs' on fire
Khushboo Razdan 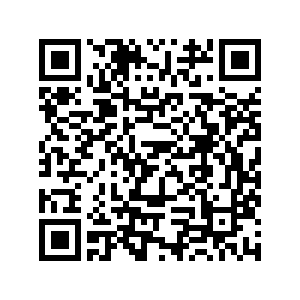 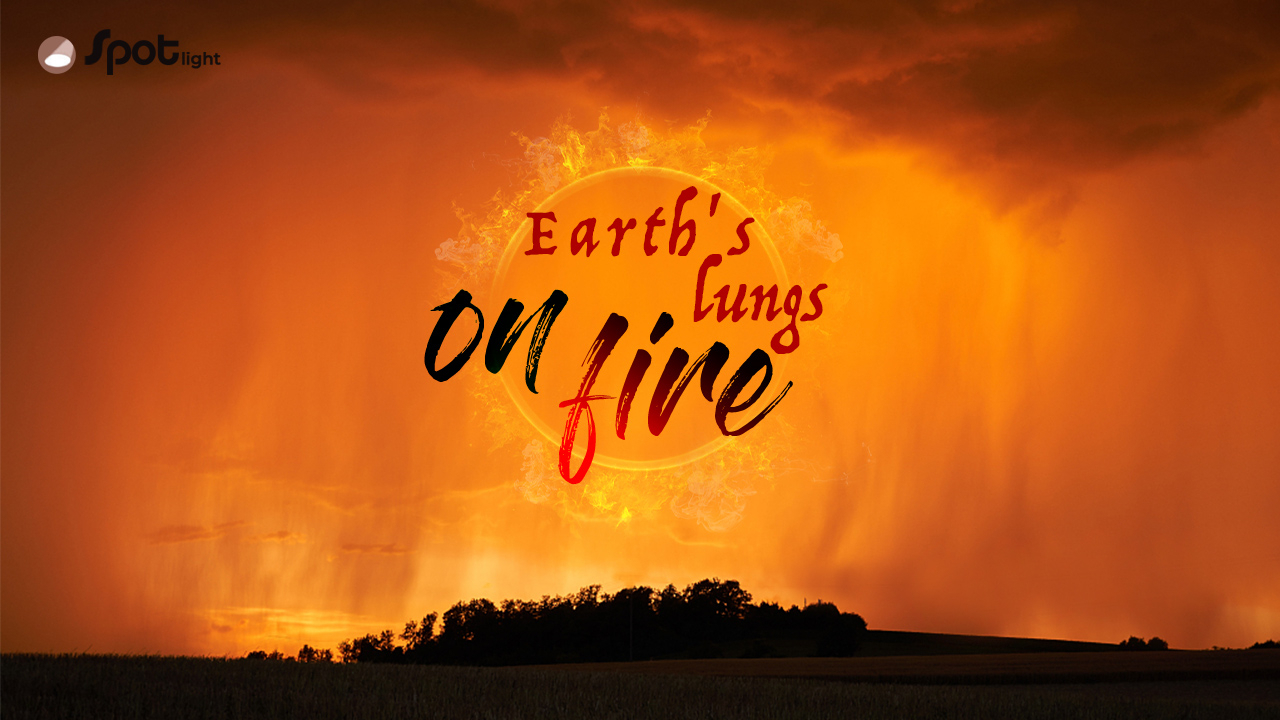 The terrifying imagery of the world's largest and most diverse tropical forest, the Amazon, consumed by devastating fires, spewing thick plumes of smoke, has sent shockwaves across the planet. 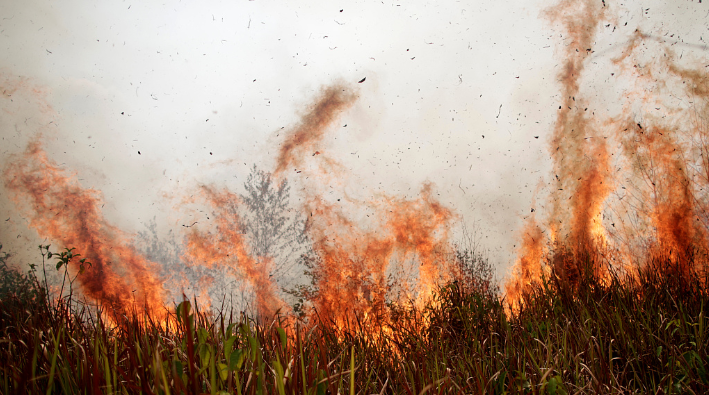 Home to over three million plant and animal species, the Amazon is critical for the survival of the mankind. It helps us breathe, quite literally! Dubbed as the "lungs of Earth," it absorbs around 90 to 140 billion tonnes of carbon-dioxide every year, which according to the World Wildlife Fund (WWF) keeps the rising global temperatures in check.

But this essential organ of our planet is now ablaze. For the last three weeks, acres and acres of forests are being reduced to ashes every single minute with over 73,000 separate fires raging across Brazil and Bolivia. 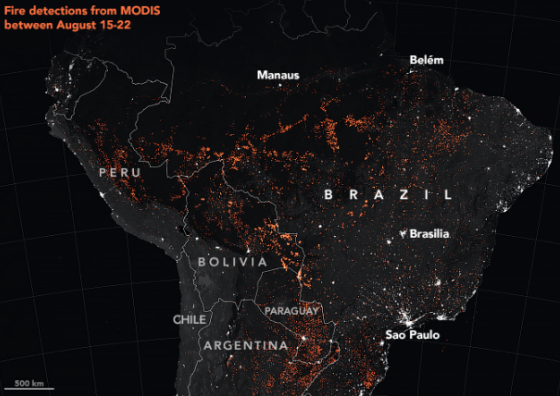 Active fire detections in the Amazon rainforest in Brazil as observed by Terra and Aqua MODIS between August 15-22, 2019. /Courtesy of NASA Earth Observatory/Joshua Stevens

Active fire detections in the Amazon rainforest in Brazil as observed by Terra and Aqua MODIS between August 15-22, 2019. /Courtesy of NASA Earth Observatory/Joshua Stevens

Roughly the size of the forty-eight contiguous United States, the Amazon rainforest is spread across nine nations of South America covering a total area of five-and-a-half million square kilometers.

According to Brazil’s National institute for Space Research, over 80,000 fires have been reported this year so far, an increase of an alarming 77 percent from the same period last year. But Brazil is not the only country in the Amazon experiencing an alarming number of forest fires. 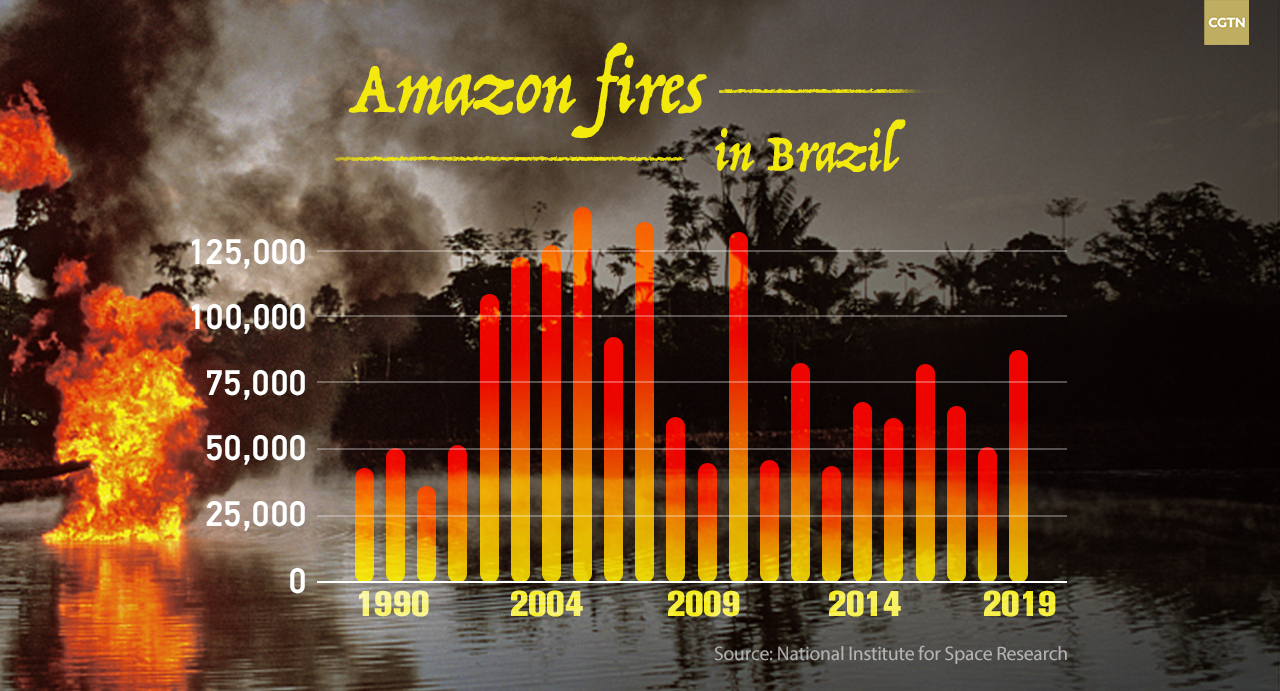 Bolivia has witnessed 19,400 fires since the beginning of 2019, up by 79 percent year on year. Peru has recorded 6,700 fires since January, a whopping 92 percent increase since the same period last year.

But the global focus is on Brazil as it has over 60 percent of the total forest area, followed by Peru and Colombia. 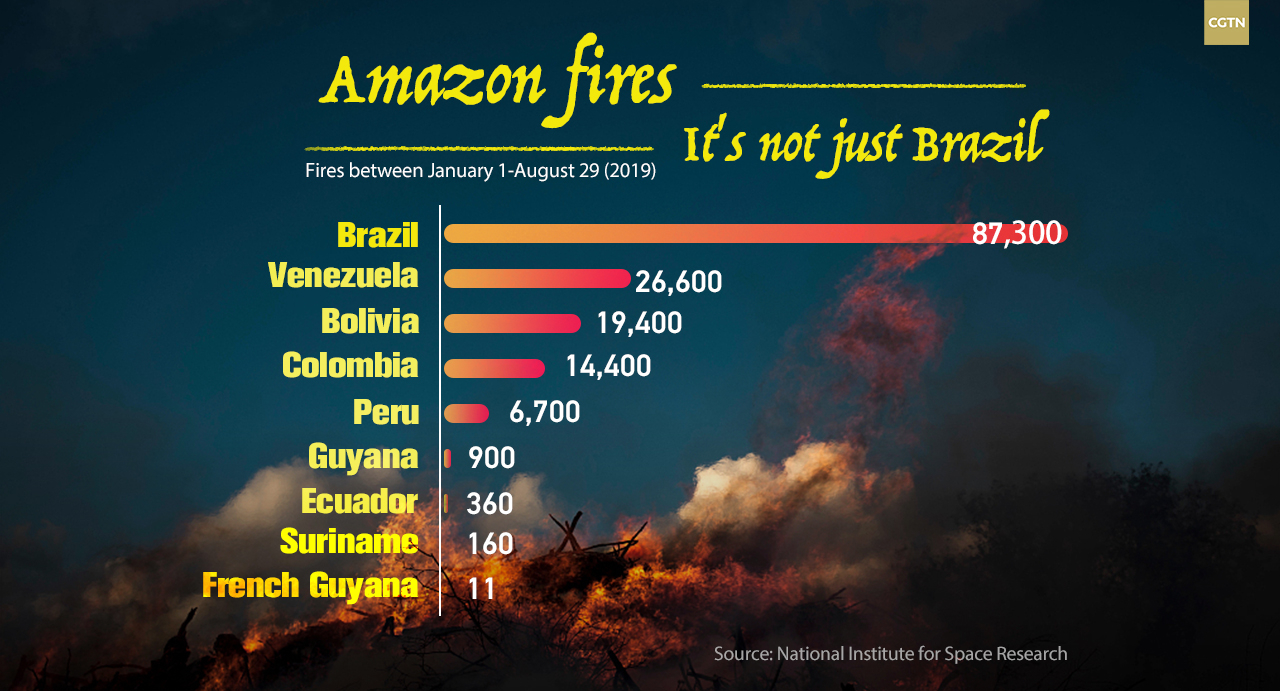 But why is the Amazon on fire?

According to WWF, almost 20 percent of the Amazon forest has disappeared in the last half-century. Though fires are not uncommon in the current season, it's the unprecedented magnitude that has caught the world’s attention. Experts say deforestation is to blame for most of the flames.

"There is no doubt that this rise in fire activity is associated with a sharp rise in deforestation," Paulo Artaxo, an atmospheric physicist at the University of Sao Paulo, told Science Magazine. 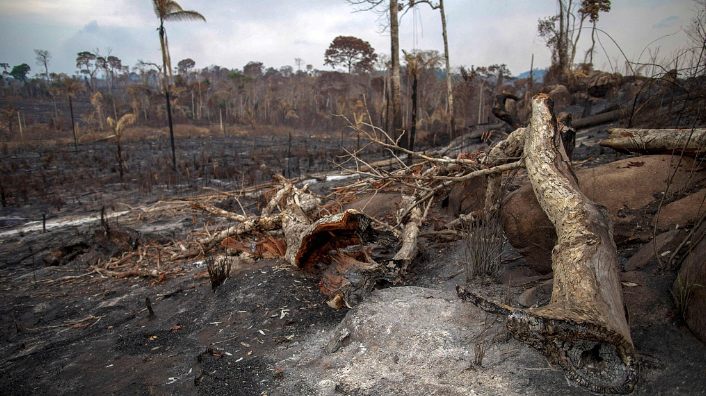 Burning is commonly used as a technique to quickly clear trees for soy farms and cattle pastures. According to U.S. Department of Agriculture, Brazil is the largest exporter of beef in the world.

A total of 34 million people live in the Amazon, out of which nearly three million are from Indigenous tribes who are members of some 420 different tribes, around 60 of which live in total isolation.

And the first victim of the blaze was the Manoki tribe in Brazil, which has a population of about 500 across eight villages in the Amazon. 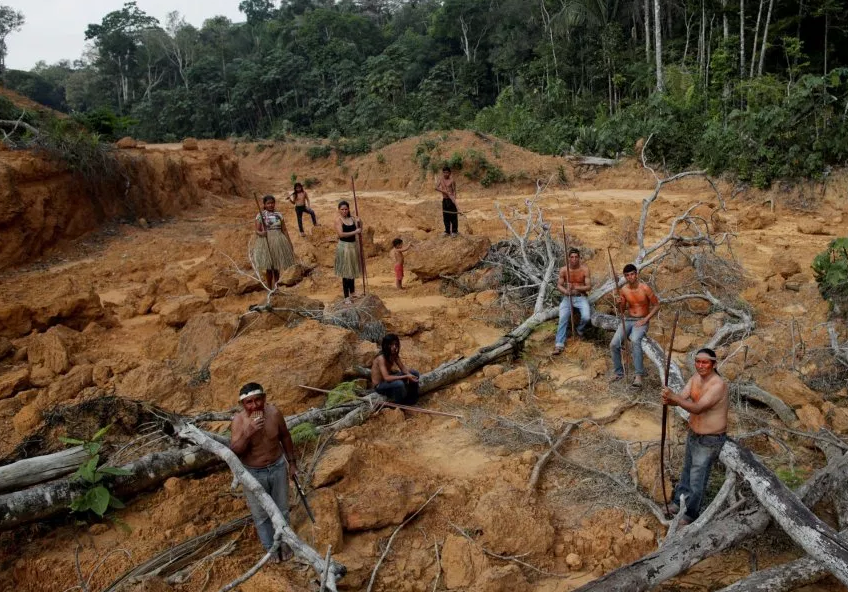 "We need our land to survive so that we can hunt, fish and maintain our culture and the respect has to be the same. Whether you're indigenous or not, the respect should be equal," said Mailon, a member of the Manoki tribe.

The smoke from the fires has plunged several cities along the Amazon basin into darkness, blocking sunlight and choking people.

"This year the situation with the fires is more critical, every year we have this problem but this year there are more fires here," said Luiz Correa, resident of Porto Velho, Brazil. 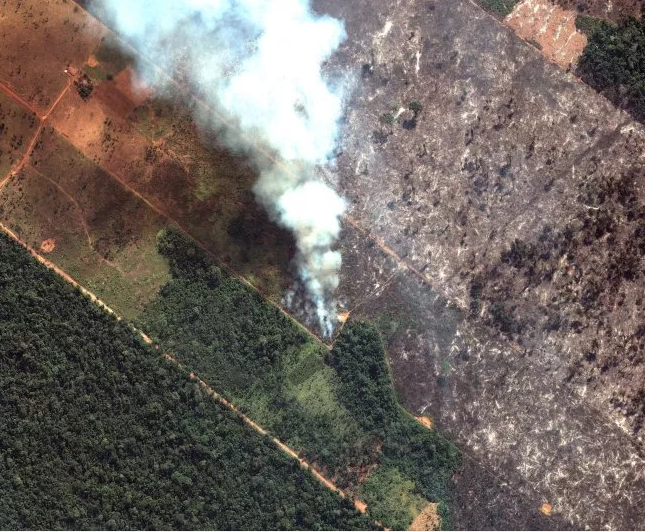 A close-up view of a fire southwest of Porto Velho, Brazil. /AP Photo

A close-up view of a fire southwest of Porto Velho, Brazil. /AP Photo

According to the data, since President Jair Bolsonaro took power at the start of 2019, the rate of deforestation has increased four times than a year earlier. Bolsonaro during his election campaign last year pledged to open the Amazon for more development.

But a global outrage has forced the Brazilian government to act. It has mobilized over 40,000 military personnel and granted about 9.2 million U.S. dollars to fight the forest fires.

Firefighters work to put out fires near the city of Porto Velho, Brazil, August 26, 2019. /AP Photo

Firefighters work to put out fires near the city of Porto Velho, Brazil, August 26, 2019. /AP Photo

French President Emmanuel Macron termed the Amazon inferno as an "international crisis" and the Group of Seven (G7) nations recently pledged around 22 million U.S. dollars to help douse the flames. But a war of words between Bolsonaro and Macron has complicated the aid efforts.

"This untruth from Macron gains strength because he's left-wing and I'm center-right-wing, also. I want to make this very clear for you," Bolsonaro said. 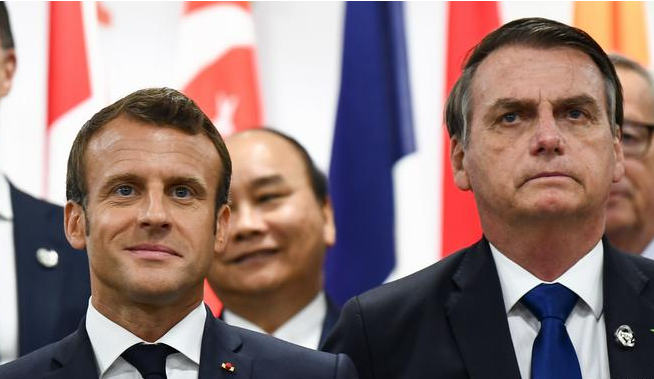 French President Emmanuel Macron and his Brazilian counterpart Jair Bolsonaro have been engaged in a war of words for several days. /AFP Photo

French President Emmanuel Macron and his Brazilian counterpart Jair Bolsonaro have been engaged in a war of words for several days. /AFP Photo 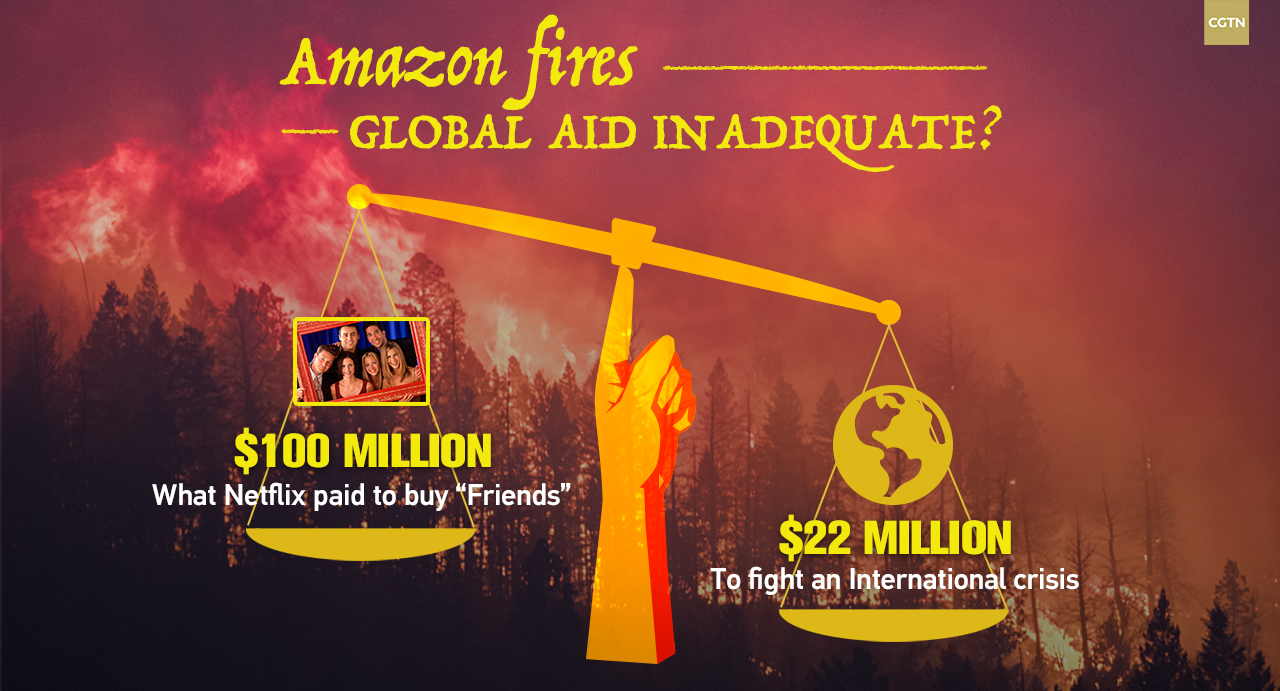 So despite the uproar, environmentalists complain the world isn't doing enough.

"Demarcation of lands would be something that helps a lot. Reduce the consumption of meat would do, just two days a week would also help. You don't need to stop entirely, just reduce to two days would help quite a bit. There are several actions one can do to help the Amazon," said Greenpeace activist Mirtes Torres. 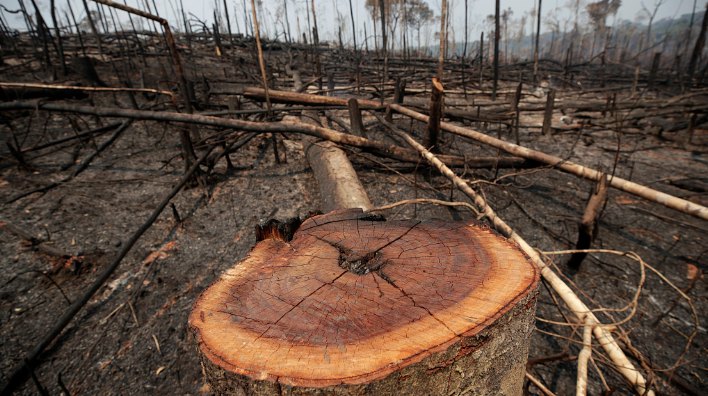 Charred trunks are seen on a tract of the Amazon jungle that was recently burned by loggers and farmers in Porto Velho, Brazil, August 23, 2019. /VGC Photo

Charred trunks are seen on a tract of the Amazon jungle that was recently burned by loggers and farmers in Porto Velho, Brazil, August 23, 2019. /VGC Photo

Melting glaciers, burning forests, rising seawater, and a warmer Earth, the climate clock is ticking and mere commitments won't be enough to save the planet before it's too late.

(With additional input from AP)