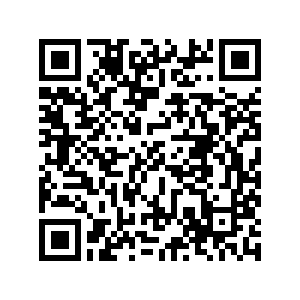 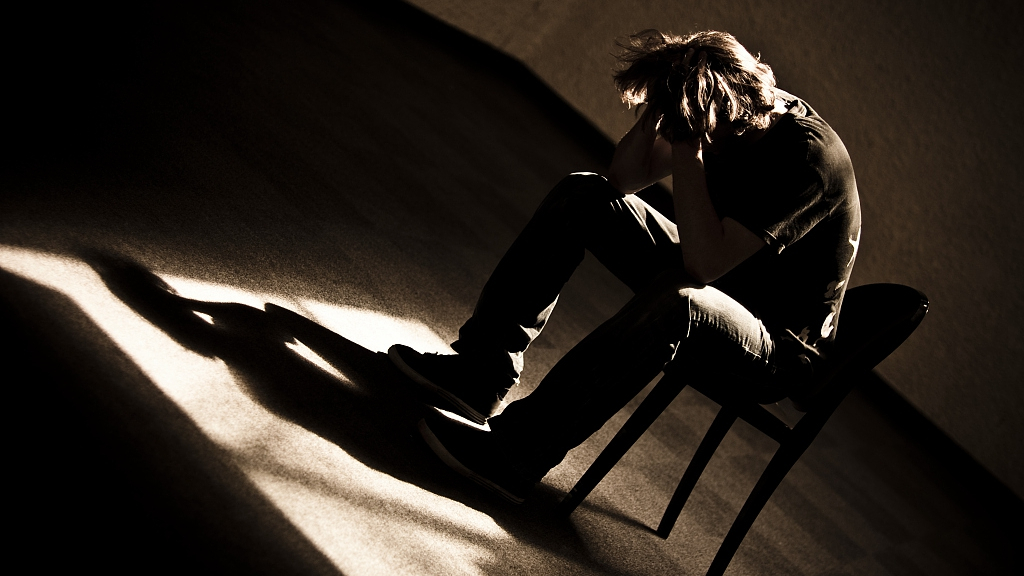 The World Suicide Prevention Day (WSPD) is being observed on Tuesday to raise awareness about how suicide could be prevented. /VCG Photo (for illustrative purpose only)

The World Suicide Prevention Day (WSPD) is being observed on Tuesday to raise awareness about how suicide could be prevented. /VCG Photo (for illustrative purpose only)

Suicide ranks among the top 20 leading causes of death globally with an estimated one million people dying per year by committing suicide, which means an individual is taking their own life every 30 seconds.

With the World Suicide Prevention Day (WSPD) being observed on Tuesday to raise awareness about how suicide could be prevented, CGTN Digital takes a look into China's radical transformation from being a country with one of the highest suicide rates in the 1990s to one among the lowest in 2016.

The WSPD has been organized by the International Association for Suicide Prevention (IASP) in collaboration with the World Health Organization (WHO) and the World Federation for Mental Health (WFMH) on September 10 every year since 2003.

While suicide prevention remains a universal challenge, China has been a huge success story in recent decades contributing significantly to the global decline in suicide-related deaths, according to latest studies.

The Asian country registered a 64-percent drop in such deaths in the 27-year period, making it the No. 1 country in suicide prevention, a study published earlier this year in the British Medical Journal (BMJ) showed.

China accounted for some 17 percent of the world's total suicides in 2016, it revealed.

The suicide rate of Denmark and the Philippines decline, trailing China's with 60 and 58 percent respectively.

In comparison, the United States has witnessed a constant rise in suicide rates according to a new evaluation of national suicide data from 1999 to 2016 by researchers at the Ohio State University.

"Twenty years ago, America’s rate was half China’s. Now it is twice China's," The Economist noted.

In 2002, China's first ever national survey on suicide, based on 1995-99 data, revealed that suicides accounted for 3.6 percent of the country's total deaths, making it the fifth major killer behind cerebral vascular disease, bronchitis, liver cancer and pneumonia. During the period, 287,000 Chinese took their own lives every year, putting the average suicide rate at 23/100,000.

While China continues to stay within the few countries that has a higher suicide rate among women than men, recent data shows the difference to have almost evened out.

In the 1990s female suicides outnumbered male suicides by a factor of three in China, meaning for every one man committing suicide, three women killed themselves.

Still, data on suicide rates from China's Health Statistics Yearbooks shows a dramatic reversal with higher suicide rates among men than women in both urban and rural areas. 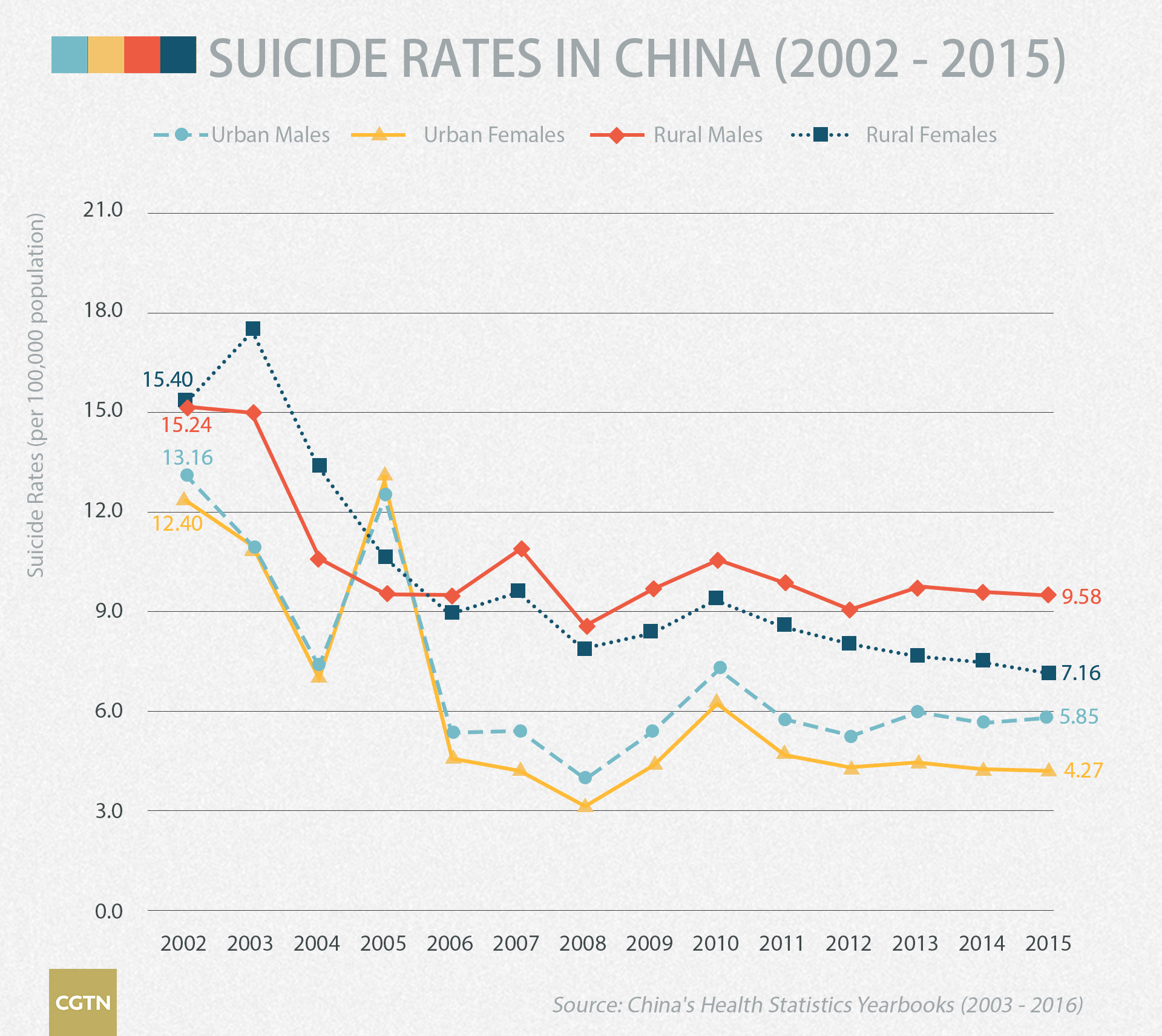 According to these figures for the period 2002-2015, which are based on China's Ministry of Health Vital Registration (MOH-VR) System, the crude rural/urban and gender-specific suicide rates witnessed a remarkable decline.

Analysts suggest social changes including greater freedom for women, urbanization and diminishing access to toxic pesticides that were once the most common means of suicide are among the key reasons behind the drastic turnaround in China's female suicide rates.

The 2002 national survey found that among young rural women, two-thirds who attempted suicide cited unhappy marriages, two-fifths said they were beaten by their spouses and a third complained about conflict.

"Female independence has saved a lot of women," Jing Jun, a professor at Tsinghua University in Beijing told The Economist, adding that [earlier] "they married into their husbands' families; they'd leave their home town; they'd go to a place where they knew nobody." 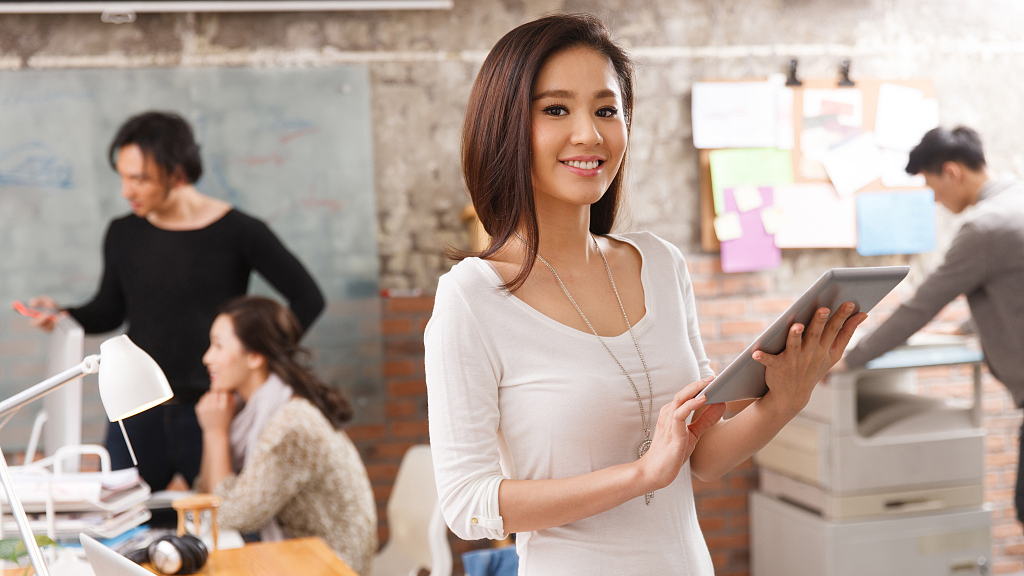 Analysts believe greater freedom and social standing for women in China have contributed hugely to bringing down the female suicide rate in the country. /VCG Photo (for illustrative purpose only)

Analysts believe greater freedom and social standing for women in China have contributed hugely to bringing down the female suicide rate in the country. /VCG Photo (for illustrative purpose only)

These days, with unmarried women outnumbering unmarried men by three to one in Chinese villages, rural women may have a much enhanced sense of value and power and a greater social freedom than their counterparts three decades ago, note analysts.

Likewise in hindsight, urbanization, long associated with weakening of social bonds, might have ironically removed certain social constraints leading to more freedom for women. For instance, escaping an abusive husband or a tyrannical mother-in-law is easier in a city than in a village; also the ways to kill oneself is harder in an urban environment than in the countryside.

The 2002 survey also revealed that 88 percent of the female suicide victims had used agricultural pesticides or rat-poison to finish their lives. Restricting access to easy means for taking one's life has been a key deterrence to suicide. China's gradual elimination of toxic pesticides could have had a substantial impact in reduction of rural female suicides.

In urban areas, men tend to commit suicide through violent means such as hanging or jumping off from buildings, whereas women resort to medication as a means for suicide, which is not always lethal. So an increasing urban migration from Chinese villages could have effectively saved more women than men.

Overall, most studies show a general decline in suicide rates among all the gender and regional categories in China. The studies also recommend targeted suicide prevention programs, particularly for certain groups, such as rural males for instance, where suicide rates have declined but at a slower rate.