India is unlikely to sign RCEP in 2019
Ji Xianbai 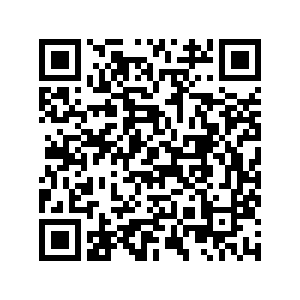 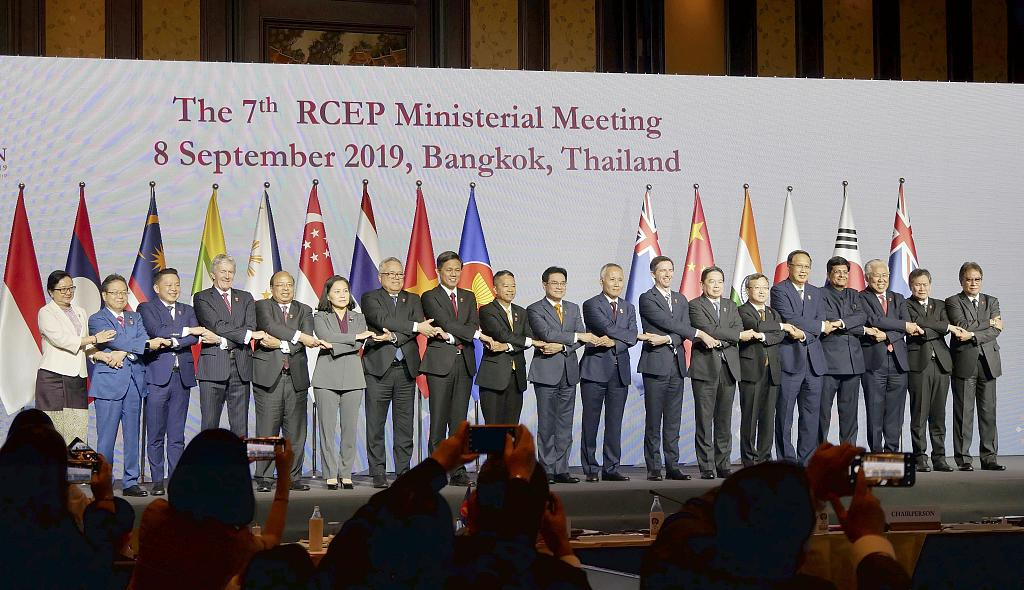 Editor's note: Dr. Ji Xianbai is a research fellow with the International Political Economy Programme of the S. Rajaratnam School of International Studies, Nanyang Technological University, Singapore. The article reflects the author's opinions, and not necessarily the views of CGTN.

At the 7th Regional Comprehensive Economic Partnership (RCEP) Ministerial Meeting held in Bangkok, Thailand on September 8, ministers pledged to conclude RCEP negotiations by the end of this year. Despite the promise, it remains a far-off goal. Because so far, only seven largely technical chapters out of potentially 20 chapters have been agreed upon.

First, RCEP is expected to be a high-standard trade agreement. But most of India's existing FTAs are very shallow in terms of commitment. For example, through ASEAN Plus 1 agreements, Australia, New Zealand, China, Japan and Korea all agreed to eliminate more than 90 percent of tariff lines vis-à-vis ASEAN member states. India only cut around 80 percent. So, concluding RCEP would require India to open its market to a significant degree that it has never attempted before. 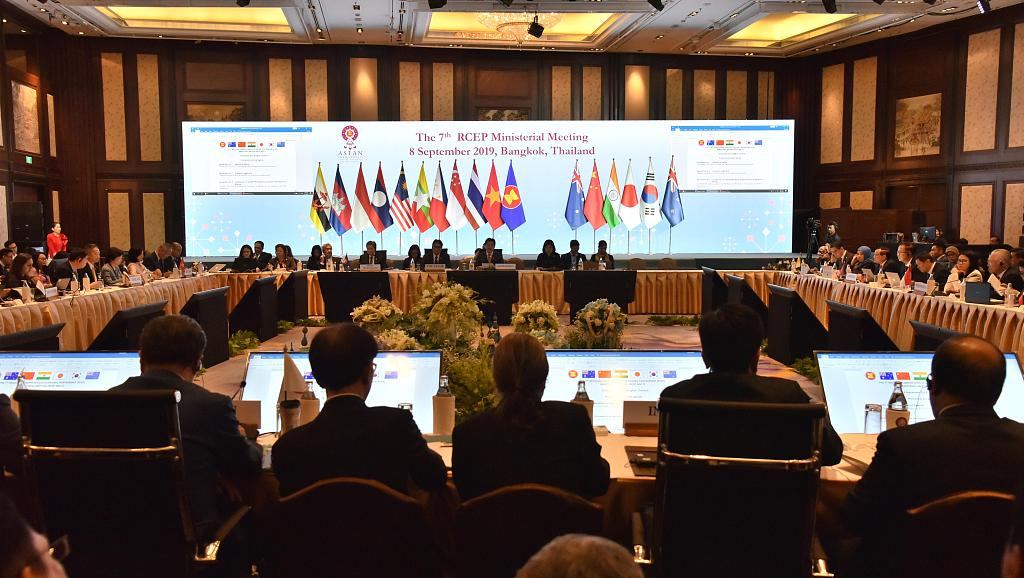 The second contradiction relates to the tension between the prospect of greater exports and the fear of greater imports. India has reviewed its past FTAs and concludes that growth in imports has been greater than the increase in exports, resulting in a greater trade deficit. In India, the prevailing view is that trade deficits damage local industries and disrupt local job market. As such, an FTA's impact on trade balance has come to be the main criteria to determine whether an FTA is a good deal or a bad deal.

This is a particular concern in the context of RCEP because of China. India has an FTA with RCEP partners like ASEAN, Japan, and South Korea, so it sees RCEP as fundamentally a proxy bilateral FTA with China. But as we know, India runs a large and increasing trade deficit with China. In fiscal 2013, India's deficit with China was a little more than 30 billion U.S. dollars. Last year, it was widened to around 60 billion U.S. dollars.

Therefore, India is against RCEP for the fear that the agreement might further accelerate the growth in bilateral deficits to the detriment of local industries. India tried to push for stricter rules on the origin in RCEP to restrict China's exports to India, but the proposal was shot down by other RCEP negotiating countries.

One last contradiction concerns the agreement itself. For India, services currently contribute around 60 percent of GDP and employ around one third of the total population. Agriculture makes up another 15 percent of national output but employs approximately half of the labor force. 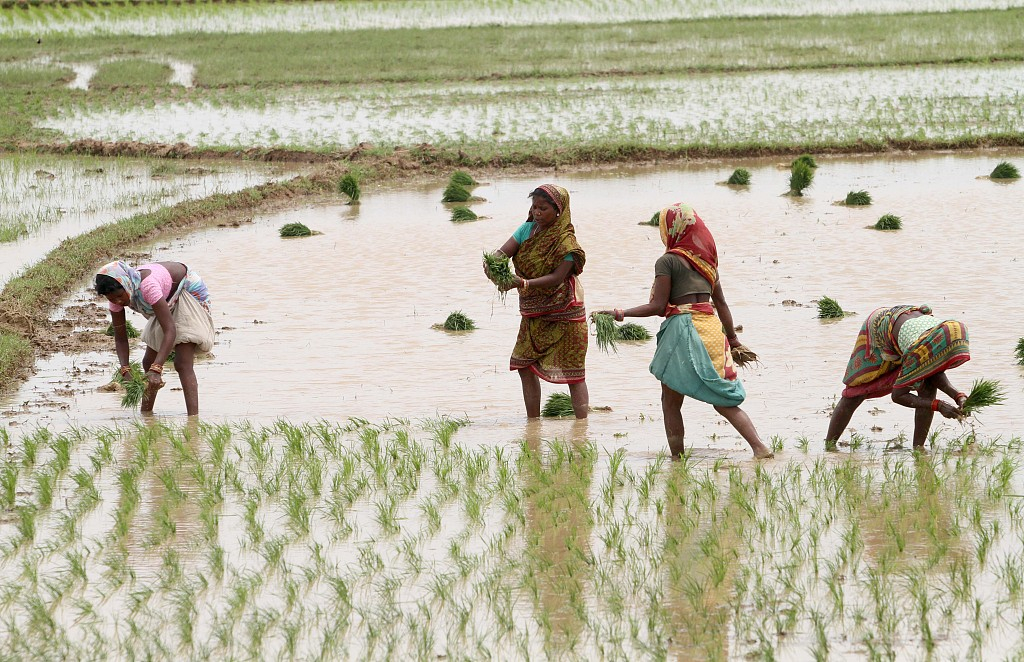 Agriculture is a very important source of national growth in India. The picture shows a group of Indian women looking at agriculture paddy field in eastern India. /VCG Photo

Agriculture is a very important source of national growth in India. The picture shows a group of Indian women looking at agriculture paddy field in eastern India. /VCG Photo

This two-track economic structure entails India to adopt a negotiation position that resists the reduction in agricultural tariffs while pushing for greater liberalization in the services sectors, including freer movement of workers and professionals. In terms of manufacturing, apart from the generalized worries about imports from China, India is relatively ambivalent because it does not participate in the sprawling East Asian regional supply chains in the way other 15 RCEP members do.

But, as it stands, RCEP is a goods-heavy and services-light agreement, meaning it focuses more on trade in goods than on cross-border provision of services. Such an agreement is clearly not in line with India's economic structure and negotiating priorities.

Over the past few years, India has gradually improved its market access offers, but failed to make meaningful progress on the services liberalization. And the perceived weak negotiation performance of not being tough enough to stand up for national interest has led to domestic pushbacks. Indian farmers have warned that if agriculture is not taken off the table they would organize massive protests. Indian industry associations have voiced vehement opposition to RCEP, so much so that Indian Trade Minister Piyush Goyal had to pull out of the Beijing inter-ministerial session a month back.

To break the deadlock, Prime Minister Narendra Modi needs to make a bold political decision to embrace greater economic integration with East Asia via RCEP. Though he is personally in favor of RCEP, Modi is surrounded by advisors and lobbyists who are more hostile towards the deal partly for the reasons outlined above. And with state elections coming up in key agricultural state like Maharashtra, Modi is not in a position to make unpopular policy decisions like signing up to RCEP this year. He might be able to do so half into his second term if he were to consolidate power. But the question is: other countries are ready to wrap up RCEP talks, will they wait for Modi to give RCEP the nod?