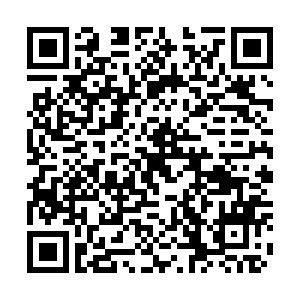 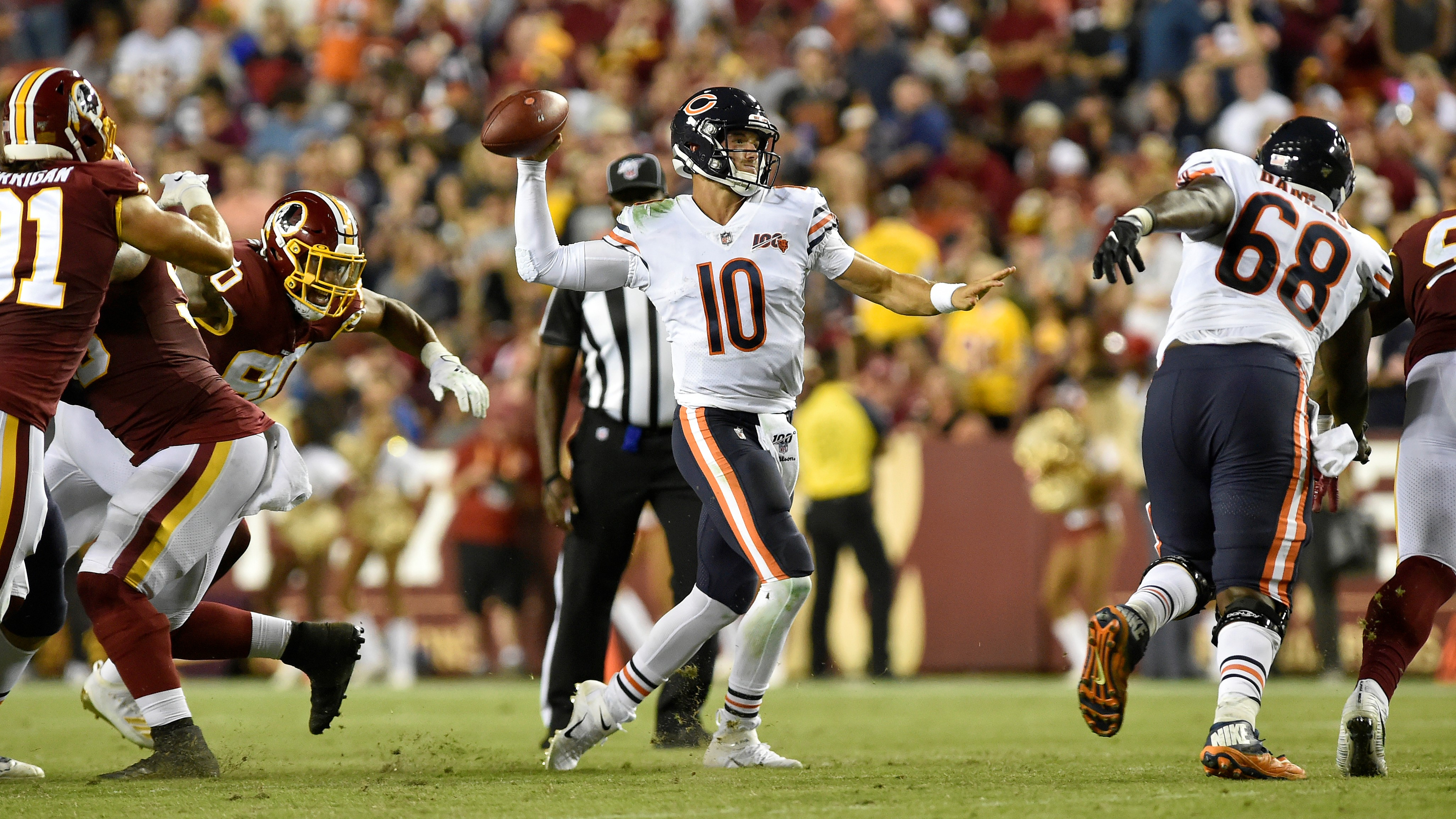 Chicago quarterback Mitchell Trubisky delivered his first three touchdown passes of the NFL season Monday and the Bears defense stymied Washington in a 31-15 victory that dropped the Redskins to 0-3.

Trubisky passed for 231 yards, connecting with Taylor Gabriel on scoring passes of three, one and 36 yards as Chicago built a 28-3 halftime lead.

The Bears had scored just 19 points in their first two games, 12 of those coming on field goals by Eddy Pineiro.

Gabriel departed in the second half with a concussion, but Chicago held on, aided by five turnovers from Redskins quarterback Case Keenum in the face of a strong defensive effort from Chicago. 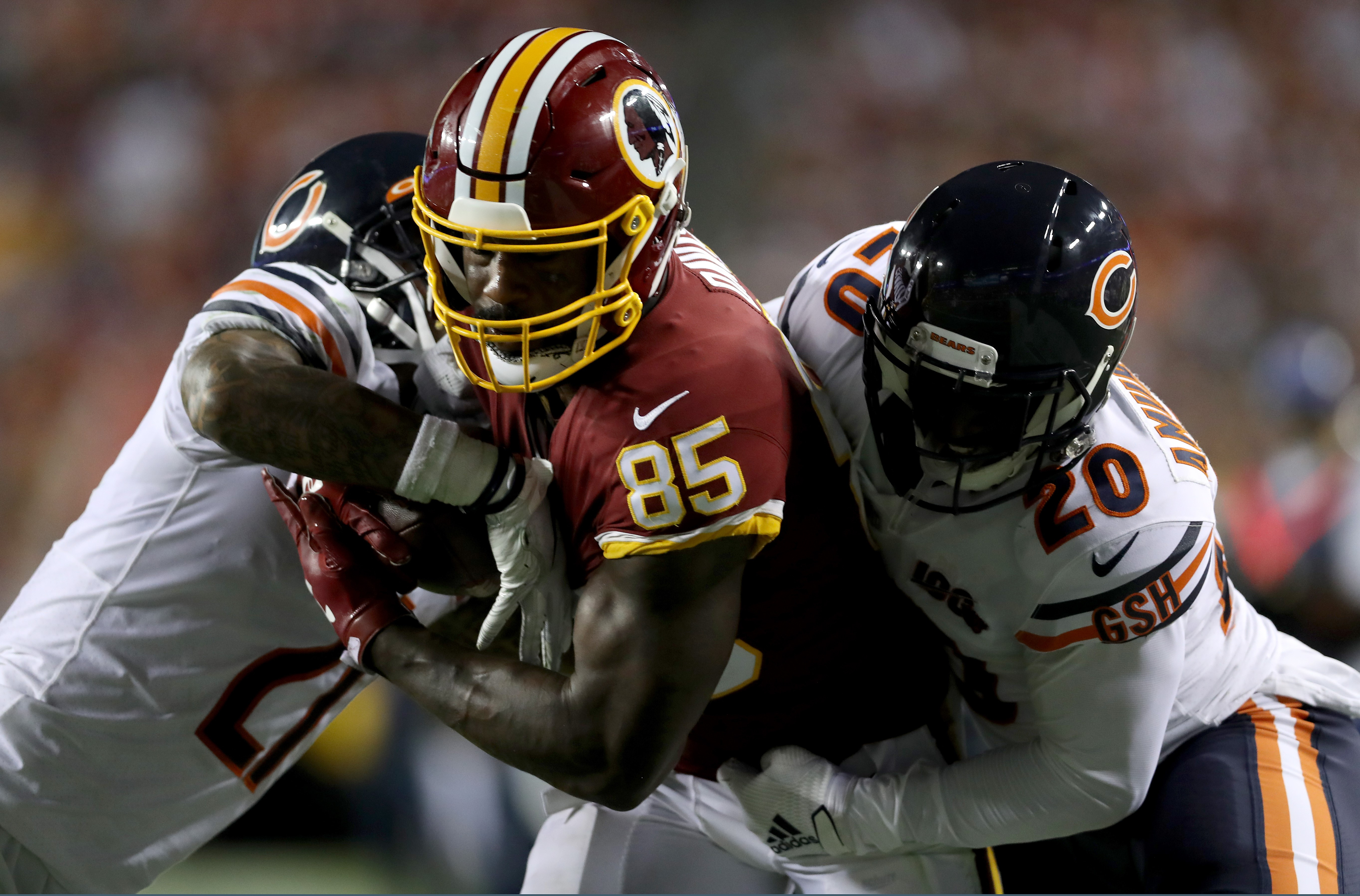 Ha Ha Clinton-Dix #21 and Prince Amukamara #20 of the Chicago Bears tackle Vernon Davis #85 of the Washington Redskins in the game at the FedExField, September 23, 2019. /VCG Photo

Ha Ha Clinton-Dix #21 and Prince Amukamara #20 of the Chicago Bears tackle Vernon Davis #85 of the Washington Redskins in the game at the FedExField, September 23, 2019. /VCG Photo

Bears safety Ha Ha Clinton-Dix reeled in Keenum's over-thrown pass intended for wide receiver Trey Quinn and returned it 37 yards for a touchdown in the first quarter as Chicago took a 7-0 lead.

"I was just following the quarterback's eyes and I made the play on the ball," said Clinton-Dix, who played nine games for the Redskins last year after he was traded in October from the Green Bay Packers.

"Hell yeah," he added of whether it was special to score against his former team although he added more seriously: "This is my former team, I have a lot of guys on that team that I love that I have great relationships with.

"Anytime you get a chance to come compete against your former team that's a little extra on the cake."

Clinton-Dix added a 59-yard interception return in the third quarter and Kyle Fuller also had an interception. 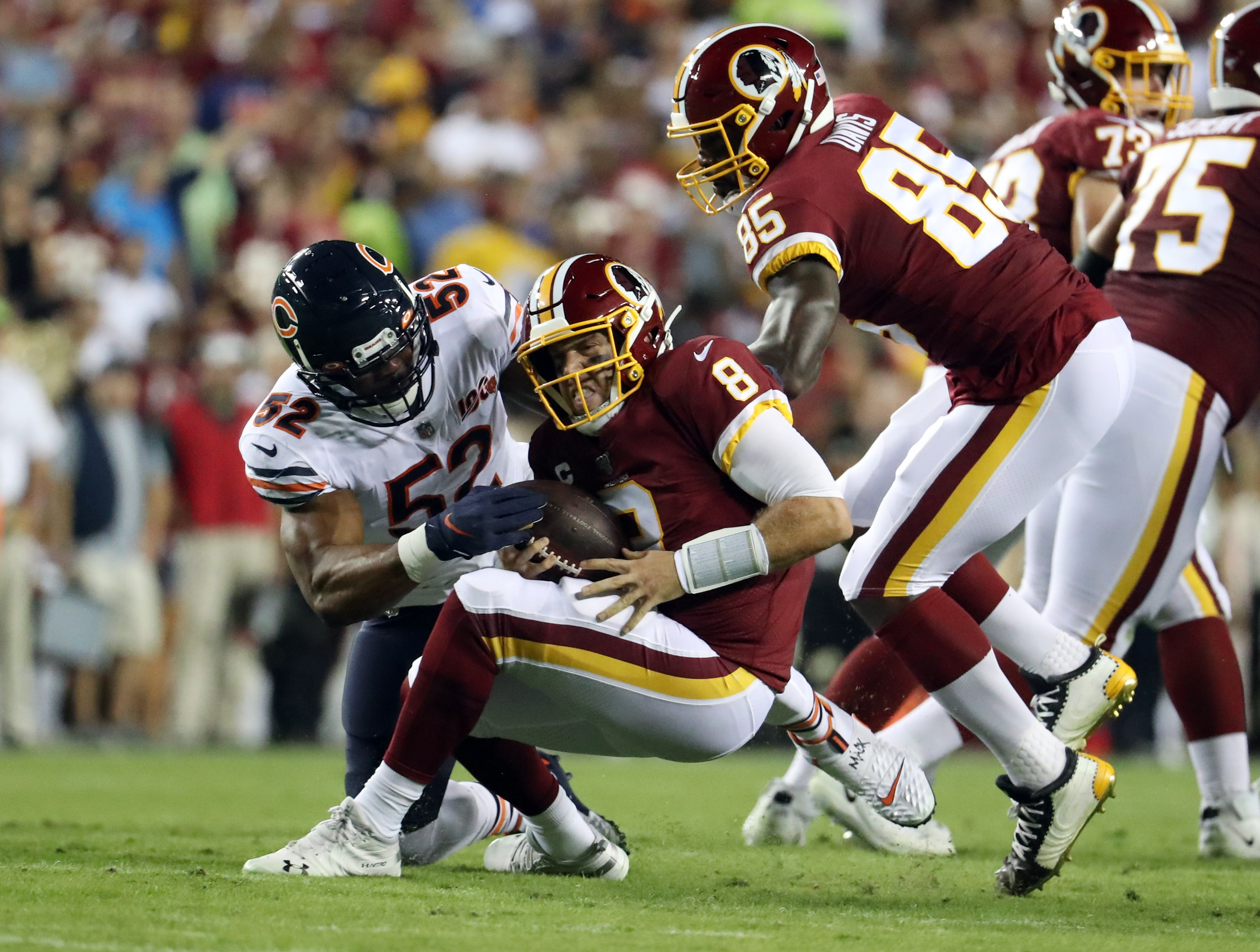 Khalil Mack #52 of the Chicago Bears sacks Case Keenum #8 of the Washington Redskins in the game at the FedEx Field, September 23, 2019. /VCG Photo

Khalil Mack #52 of the Chicago Bears sacks Case Keenum #8 of the Washington Redskins in the game at the FedEx Field, September 23, 2019. /VCG Photo

On a fourth and inches play late in the fourth quarter Danny Trevathan stripped Keenum of the ball again.

Washington coach Jay Gruden found himself immediately fielding questions after the game about the possible replacement of Keenum, who was acquired in March in a trade with the Denver Broncos.

The Redskins have first-round draft pick Dwayne Haskins and veteran Colt McCoy available at quarterback, but Gruden indicated he'd be sticking with Keenum for now.

"The most important thing is we have to have some continuity, we can't be changing people every five minutes," he said.

"We're not going to be perfect, but we need to be better," Gruden said. "I feel like Case has the tools to become a very efficient quarterback in this offense and give us some victories here moving forward."