From the Soil: Can private money really cut poverty?
In the Field 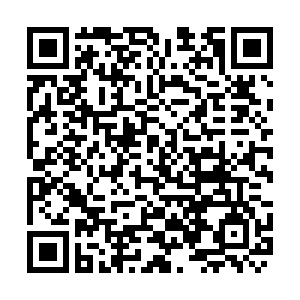 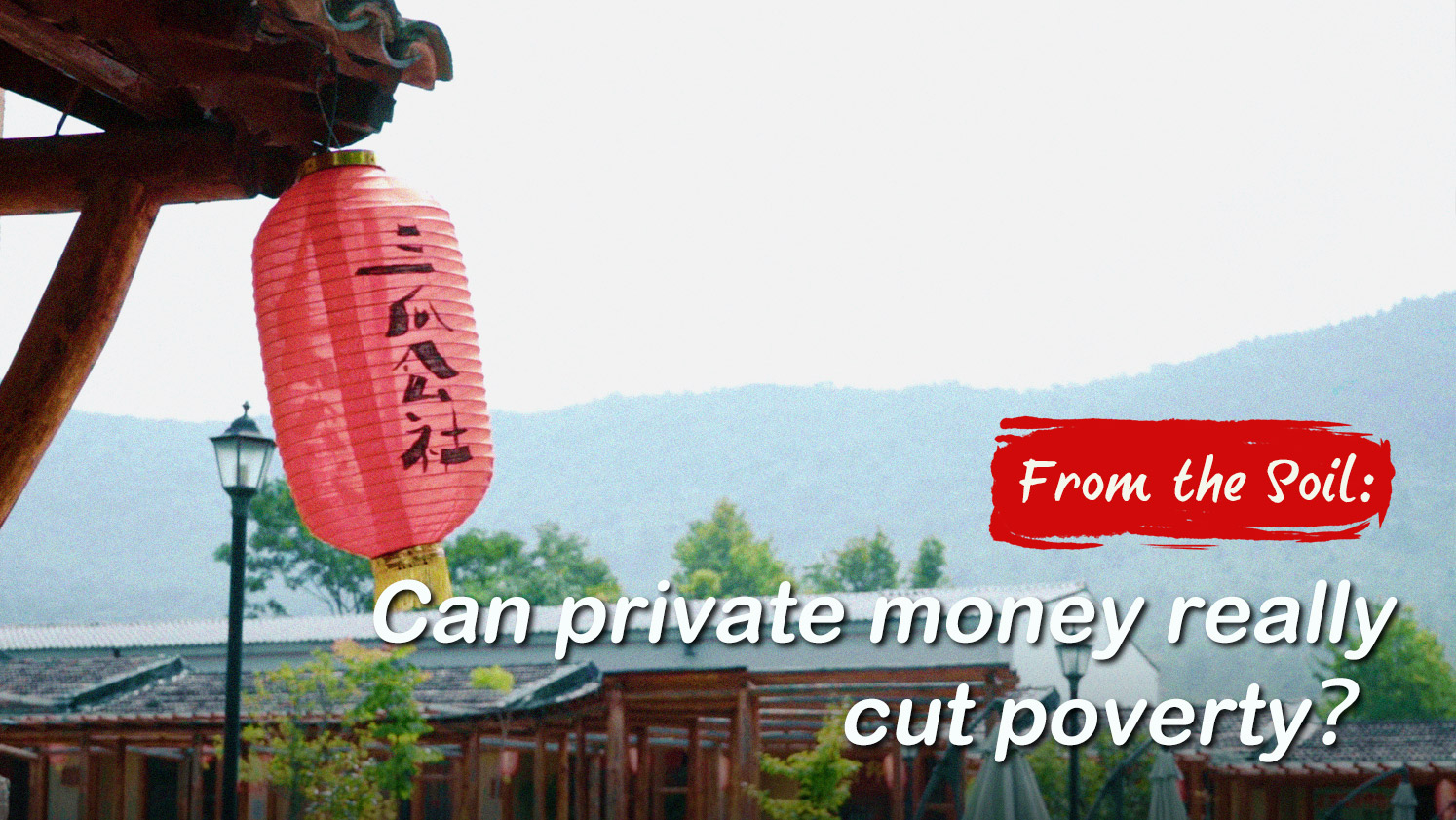 Editor's note: Poverty reduction in rural areas has been enormously challenging worldwide, and China is no exception. In this five-episode video series "From the Soil," CGTN has invited development experts to make an on-the-spot investigation in China's rural regions to see China's ways to reduce poverty and examine whether they can shed light on the global poverty alleviation work. In the second episode, Hannah Ryder, CEO of Development Reimagined, heads to Three Melon Community in Anhui Province. The views expressed in the video are her own and not necessarily those of CGTN.

But this is not a story about picking watermelons. This is an investigation into how the Chinese government is trying to use private companies to eradicate poverty in the hardest to reach rural areas and whether there are lessons to be learnt for other parts of the world.

I'm Hannah Ryder. I've been working on the question of how people can best lift themselves out of poverty for close to 20 years now, including the last five years in China. That's why I've come to investigate what is happening in Sangua.

Translated as the "Three Melon Community", Sangua is located in Anhui Province in eastern China, and covers an area of just under 1,300 hectares. To put that in context, that's roughly double the size of the Kibera slum in Kenya – Africa's largest informal urban settlement. 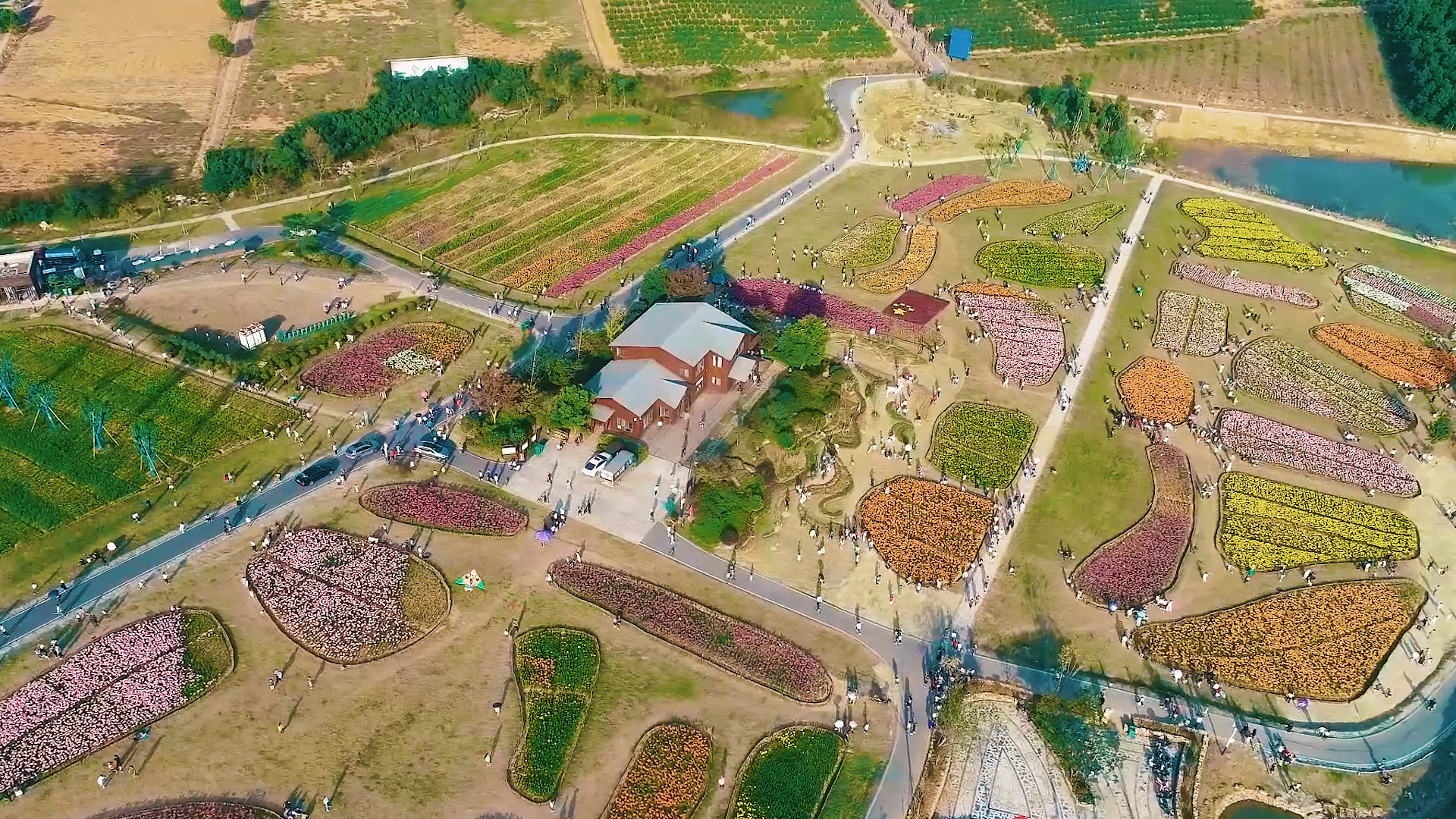 And like Kenya, China has struggled to eradicate poverty in some difficult areas. So China is trying a new, innovative approach – including using private money.

Around the world, there are still over 700 million people living in extreme poverty, the majority of those being in African countries, including Kenya where I was born, and 16 million now in rural areas in China.

Over the years, there have been some really interesting and innovative initiatives created to cut rural poverty, including national projects like India's scheme to create housing for all rural poor initiated in the 1980s, and projects delivered by charities and individuals – like the famous Grameen Loans Project in Bangladesh initiated by Nobel Laureate Professor Muhammad Yunnus, which brought rural communities together to loan each other money.

At the time, these projects were thought to be innovative because they were not just building new hospitals or schools, or helping people farm better, they were building much-needed infrastructure or helping kick-start new businesses. At the same time, they have nearly all relied on the idea of the government or charities giving out money. What if there was another, further innovation– harnessing private companies, less government or charity handout and more profit-driven?

In this context, the Three Melon Community is an intriguing case. Back in 2015, annual per capita income of the villagers living in Three Melon Community was less than 500 U.S. dollars – that's just over 1.25 U.S. dollars a day, the international threshold for "extreme poverty" at the time. That made it poor, though by no means the poorest in China.

But by 2017, that daily income had risen to 38 U.S. dollars a day. And it has supposedly been achieved by a private company wanting to make a profit. But how?

Three Melon Community is actually a very recent community – an artificial construct invented in 2015, directly taking in three villages but covering another 12. It was the brainchild of a private company called Huaishang who normally make profit by building and running restaurants and hotels, and they teamed up with the local government who wants to eradicate poverty. 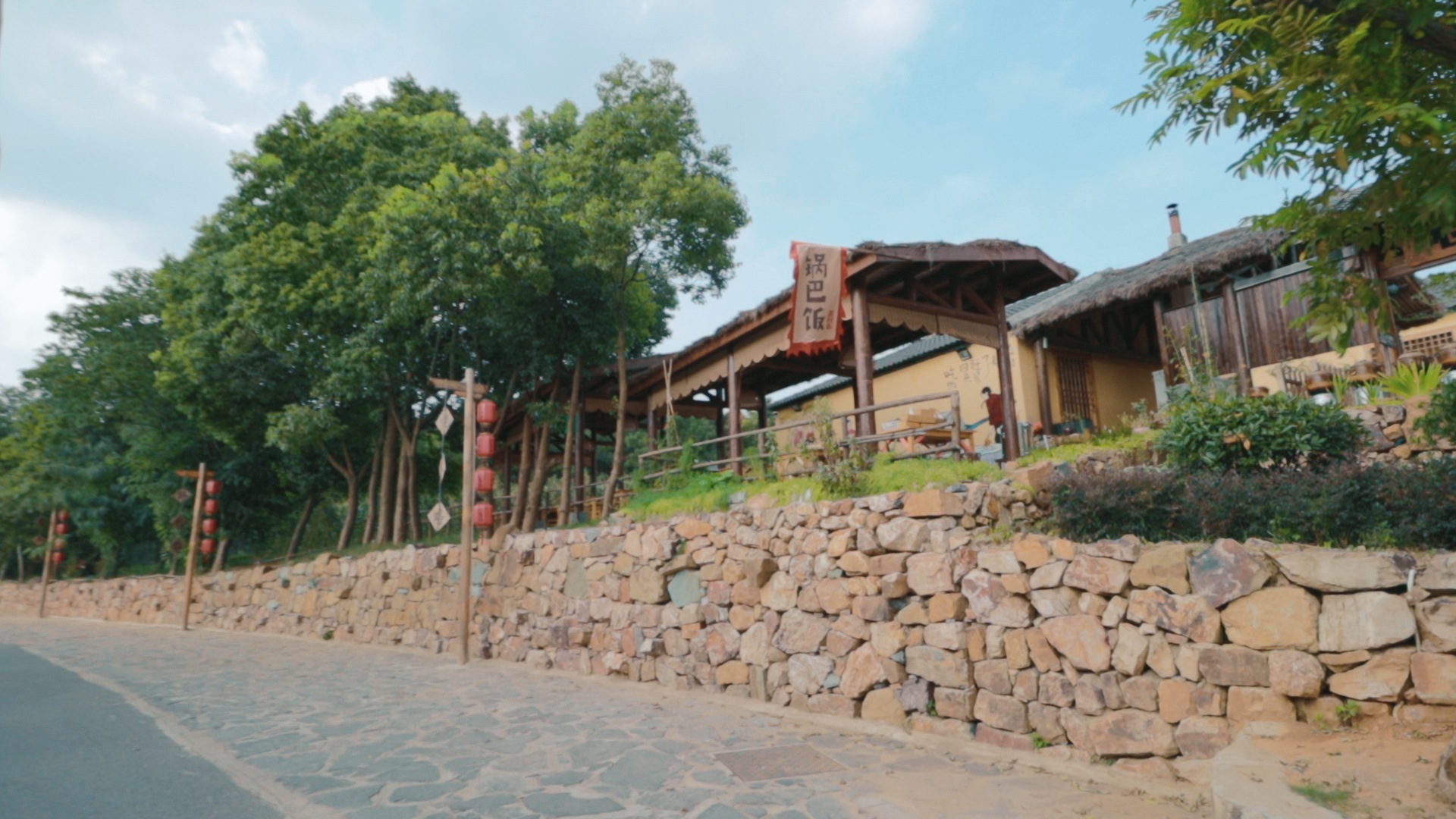 All across China local governments are teaming up with private companies, community groups, and farmers. The details can get a bit complicated but the principle behind them all is: where governments and charities often see poverty and problems, private companies see business opportunities.

The idea is that business opportunities will bring jobs and eradicate poverty. But what the private companies often lack is money to get it all started – so local governments agree to invest some –even half of –the money the company needs.

I have met and talked to Cheng Benxiang, the original village chief before the project began. He now lives here within one of the seven rural restaurants and six boutique hotels that were created to bring tourists in. He is one of 200 local employees that form part of 300 strong operational team getting things done here every day. I want to ask him what his fellow villagers thought about what had happened since the project began.

"When the project began, did the villagers support it?" I asked.

He told me that at first villagers did not understand the project, but Huaishang group took a group of around 100 villagers' representatives to Jiangsu Province to see a similar project, and that was how they were convinced.

But I noticed that his family is not with us. And Cheng went on to tell me that when the project was initiated, the government also tried another way to eradicate rural poverty – getting villagers to move to cities and giving each person an apartment of 65 square meters if they wanted.

Many decided to move, meaning that while in 2015 there were 2,100 local villagers here, now there are a lot less – just 600. So what do those villagers do here, what are the projects that private companies in the Three Melon Community have started and the local government have supported? The first one is tourism.

While I was traveling in the village, one of the tourists here recommended me to go to the local hot springs, which seem to be one of the best tourist activities here. The Three Melon Community attracted over seven million tourists in 2018, and part of that was to come to the hot spring. The project included renovating the hot-spring because it would help attract those tourists, and also manage the seasonality of tourism.

Parts of China are getting rich while other parts are staying poor. So how do you get the rich parts to help the poor parts. One solution is tourism. The rich people literally spend their money in the poor communities.

Tourists at the "Tulip Highlands" of Sangua. /Video screenshot

Tourists at the "Tulip Highlands" of Sangua. /Video screenshot

The China National Tourism Association estimates that China's domestic tourists made 2.5 billion trips to internal rural areas in 2017 – from weekend getaways to longer breaks – and in total generated 240 billion U.S. dollars in revenues.

Here in Three Melon Community, they got under one percent of the share of the rural tourists and revenues, but it's been enough to attract people who had previously left the village to open new tourist-facing businesses. The kind of people with skills that villages need to get out of poverty.

I'm back walking around the little village shops, which seem to be mostly run by women. I've been told that traditional snacks are the most popular product bought from the tourists here. I was able to talk to one of the shop owners here to know why they wanted to come back.

Ms Zhou came back from Tianjian after 10 years of living there to contribute to the economy. She told me that she came back because Three Melon Community's policy is really attractive. They don't have to pay for the rent, water, and electricity. More importantly, it is really convenient for her to take care of her children here.

Now, if tourism is one business opportunity for the private sector that can lift people out of poverty, e-commerce is another. E-commerce is Three Melon Community's largest earner. And that's largely because of the e-commerce center. It was created in 2015. And since then it has attracted different e-commerce platforms, like Alibaba to JD, and many others that are really popular across China but you've never heard of them. 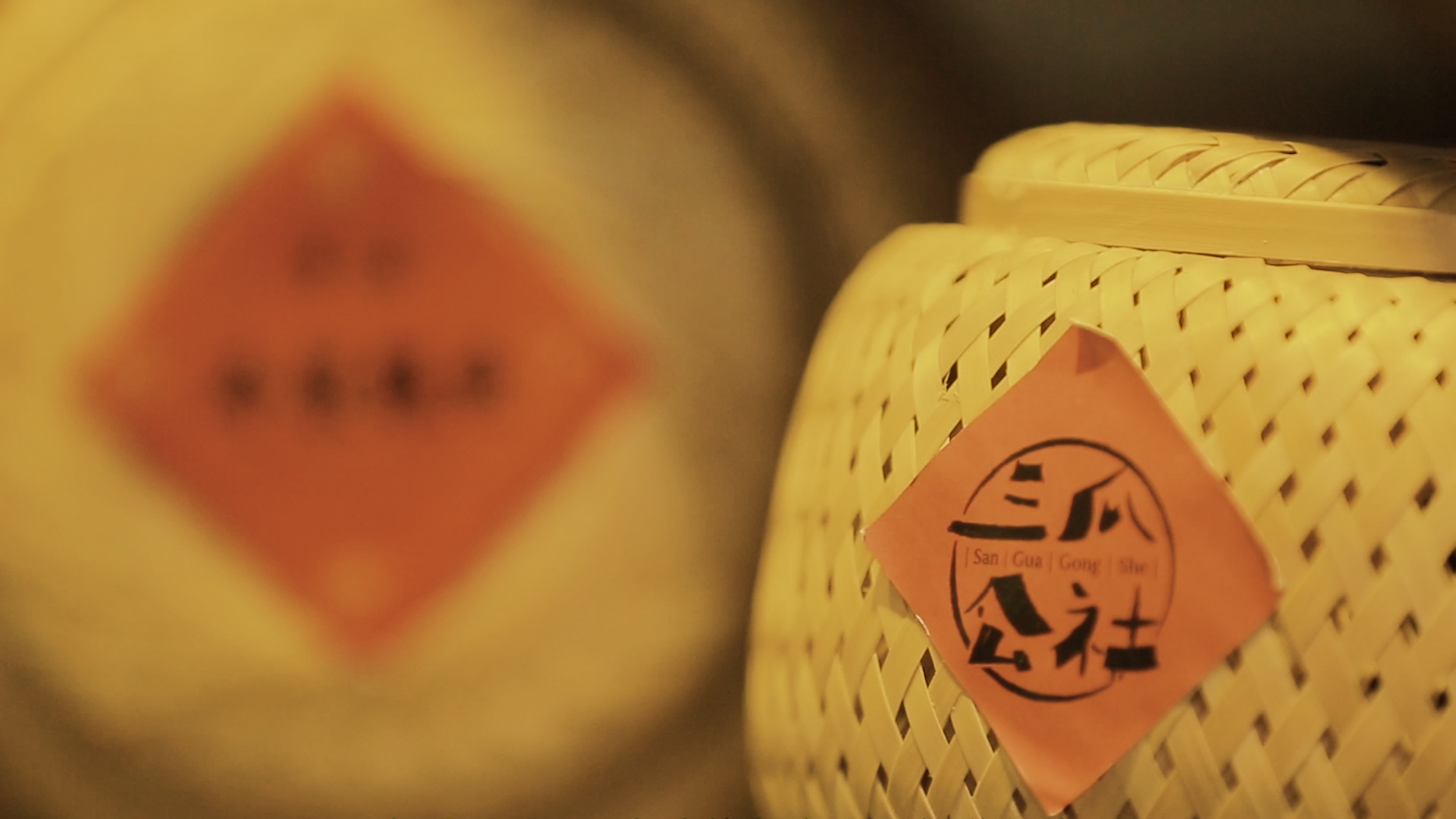 Packaged snacks being displayed in the shops. /Video screenshot

Packaged snacks being displayed in the shops. /Video screenshot

I've been speaking to Peng Peng who's been here since 2017. He came here after 14 years working in other cities and is now trying to contribute to his hometown. He's been speaking to me about the progress and challenges that he has faced.

"What the biggest challenge you face?" I asked.

Peng Peng's story is not unique. E-commerce is often seen as a great way to spread China's wealth from its rich areas to its poor areas. There has been a lot of attention on the 780 Taobao villages initiated by a well-known global entrepreneur Jack Ma and his company Alibaba.

Three Melon Community is not a Taobao village but the idea is the same: that people in poor areas will be able to reach rich customers far away through the internet. The problem is: it's really hard to find local talent who are web savvy. And competition is fierce between the rural communities from all over China trying to sell often very similar products to their richer consumers.

But there might be an even bigger problem. E-commerce means people can now sell their stuff online, but they can now also buy more stuff online. In fact, in 2017 rural consumers bought more than five times the amount they sold. So, some people worry that e-commerce is actually putting some rural communities in debt.

Remember I mentioned the Grameen Loans project from Bangladesh? Well, even though it was an innovative idea, just like e-commerce, some people also ended up spending up more than they earned with their new mini-businesses.

After a few days in Three Melon Community, talking to various business people, government officials and villagers, it seems obvious to me that poverty has been reduced in a very innovative way. But there are some issues we shouldn't ignore.

The first is that with two-thirds of villagers leaving, it's really hard to know if the public private partnership has helped everyone or just the 600 people who stayed. We don't have the data on the people that left.

Second, while some people are benefiting from e-commerce like Peng Peng, it is not easy to make it work, and there are issues around e-commerce encouraging some people to spend more money than they have.

And lastly is an issue I've seen with many so-called "innovative" poverty reduction projects across the world. They can seem great at first, but problems only become apparent ten or twenty years later. So, it might still be too early to judge.

But are there, nevertheless, lessons for the rest of the world?

Huaishang group has so far invested over 120 million U.S. dollars into this project. It is still a working-progress. The local government has contributed the other 50 percent. But there going to be much more to do. At the same time, they are already sharing the results of it with others. Professor Chen is the head of an academy here created to do just that. The project is meant to be sustainable within 10 years. I’m curious to know how realistic it is, and she replied:

"Our target is 10 years and it is realistic. We hope it can achieve the target in advance. It is realistic because as a village development project, Three Melon Community doesn't just rely on one source. Tourism is one important source, but more importantly, by developing new products, and interacting with our clients, we will have more diversified income source."

Professor Chen's job is to monitor and share the results of this project with others in China. But I can't help thinking how this project could be applicable to African countries where almost 400 million people are still in poverty.

This ambitious development project has a totally different mindset to rural development projects that we've seen before implemented where we've seen input into education, health, increasing agricultural yields. But those projects have had mixed results. The results for this project are also still unclear. But with trends like upper and middle class consumption rising in Africa, e-commerce, digitization, surely this kind of model is worth experimenting and adapting.