Continued struggle is the best tribute to heroes 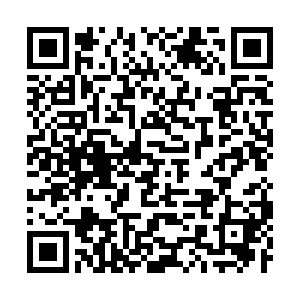 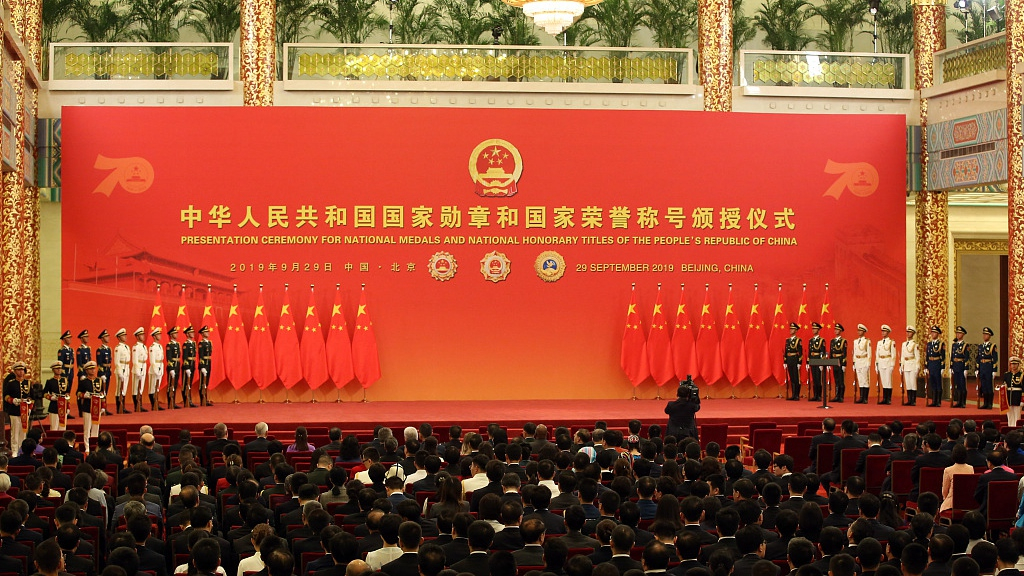 Editor's note: The article was first published by China Plus on September 29, 2019. The article does not necessarily reflect the views of CGTN.

At an awards ceremony of national medals and honorary titles of the People's Republic of China on Sunday, China's President Xi Jinping presented the Medal of the Republic, Friendship Medal, and National Honorary titles to 42 Chinese and foreign recipients. Xi Jinping delivered a keynote address at the event in which he paid tribute to all the recipients, and said that China was honoring these heroes and outstanding role models in order to promote their qualities of loyalty, perseverance, and humility, reflecting the respect and admiration held for their heroic spirit.

President Xi Jinping's use of the words "loyalty, perseverance and humility" is a just characterization of those who have been awarded the national medals and honorary titles of China. They express the Chinese people's general understanding of the character of heroes and capture the embodiment of the national spirit.

Among the 36 Chinese who have won this honor, are Shen Jilan, a rural labor hero who has long advocated and promoted the principle of equal pay for equal work for both men and women written into the Chinese Constitution; Yuan Longping, a Chinese hybrid rice pioneer who has made enormous contributions to China's food security and world food supply for more than 50 years; as well as Huang Xuhua, among the first generation of Chinese nuclear submarine designers who has worked in secret for more than 60 years, focusing on technical research.

Each has used their "loyalty, perseverance, and humility" to work hard in their own fields to interpret the Chinese nation's great spirit of creativity, struggle, solidarity, and vision. Heroes and role models have demonstrated with their actions that greatness comes out of the ordinary and that by adhering to firm ideals and convictions and working tirelessly to achieve their tasks in a down-to-earth manner, every ordinary person can achieve an extraordinary life and every ordinary job can produce extraordinary achievements. 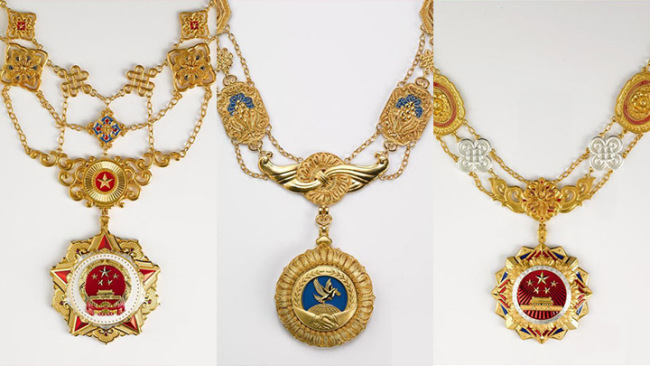 From left to right, the Medal of the Republic, Friendship Medal and Medal for the recipients of National Honorary Title. /China Plus Photo

From left to right, the Medal of the Republic, Friendship Medal and Medal for the recipients of National Honorary Title. /China Plus Photo

Of special interest perhaps to the world at large is that this time, six international friends have been awarded the Friendship Medal, the highest honor given by China to foreign nationals, coming from Cuba, Thailand, Tanzania, Russia, France and Canada. Among them is Raúl Modesto Castro Ruz, who actively promoted the establishment of diplomatic ties between China and Cuba, which was the first country to do so in Latin America.

Other awardees include Princess Maha Chakri Sirindhorn, who has long been committed to promoting Chinese traditional culture and spreading Thai-Chinese friendship, and former Tanzanian Prime Minister and Foreign Minister Salim Ahmed Salim, who helped restore China's legitimate seat in the United Nations. The six "Friendship Medal" winners have made outstanding contributions to the modernization of China and the promotion of Sino-foreign exchanges and cooperation.

At the ceremony, President Xi Jinping expressed heartfelt gratitude to the recipients of the Friendship Medal for their long-standing support and help to China, adding that Chinese people are willing to work with the people of all countries to build a community with a shared future for humanity and to make the planet a better place. Receiving her award, Princess Sirindhorn of Thailand expressed her deep honor and gratitude. All the awardees are committed to seeking peace, happiness and success for China and their respective countries, as well as a globalized world and all mankind.

All great achievements are the result of continuous struggle. The selfless efforts of the heroes have opened up the way for mankind. Future development requires even more heroes to continue to blaze trails. It is especially important to admire heroes and learn from them in the context of a world that has made great changes, unprecedented in a hundred years, and a China that has entered a new era.

For today's nearly 1.4 billion Chinese people, learning from outstanding individuals who have been awarded the national medals and honorary titles, makes sure that their heroic spirit of "loyalty, perseverance and humility" is integrated into real life, and that it remains a powerful force that promotes national development, civilization and progress, helping build a better world. It is also expected to push forward the goal of realizing the great rejuvenation of the Chinese nation and building a community of a shared future for mankind. This is the best tribute to the heroes!