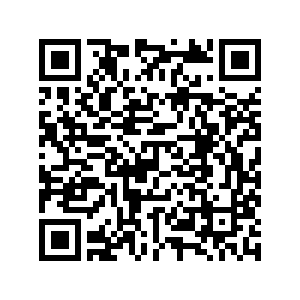 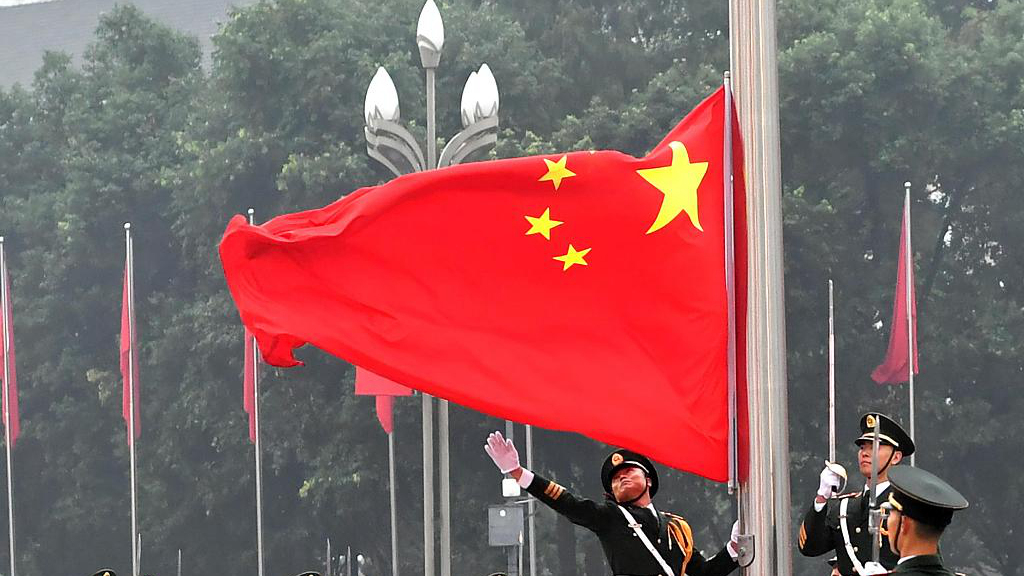 Editor's note: With a doctoral degree in communications from the Communication University of China, Dr. Summer has been working in the field of international journalism for 30 years. The article reflects the author's opinions, and not necessarily the views of CGTN.

During a grand celebration held on October 1 in Beijing to mark the 70th anniversary of the founding of the People's Republic of China (PRC), Chinese President Xi Jinping delivered a short but important speech.

While recognizing late Chairman Mao Zedong's proclamation of PRC's establishment 70 years ago heralded the ending of miseries and hardships experienced by the country as well as the beginning of a great revival of the Chinese nation, President Xi Jinping also paid respects to the revolutionary forerunners and martyrs who have made great contributions for the country's independence, development and prosperity as well as overseas Chinese and foreign friends for their help and support during the years.

According to the President, based on the outstanding achievements made during the past seven decades, China has become a strong socialist country that can withstand any challenges and overcome any obstacles along its way to greater success.

The main part of Xi's speech focuses on four guidelines for the country's future development. The first two focus on China's domestic issues and the other two are about its vision and role on the international stage, the aim of which is to build China into a stronger socialist country and a more responsible major country in a fast changing world. How should these guidelines be understood?

The first one states: To achieve greater progress and satisfy people's increasing needs for a better life, we must adhere to the leadership of the Communist Party of China (CPC), ensure the position of the people as masters of the country, maintain the socialist system with Chinese characteristics and implement the CPC's basic theory, basic line and basic policy.

It means that the CPC has remained true to its original aspiration and kept its mission firmly in mind, namely, it has united and led the nation to overcome numerous difficulties and produced a great number of miracles: It has stood up, grown rich and become stronger over the past decades. It may sound somewhat abstract, but let me illustrate it with my personal experience.

The salary for my first job was 28.4 U.S. dollars, while my son who worked as an engineer after graduation had a salary of 732 U.S. dollars. Now, my monthly pension is 1594 U.S. dollars and my son's salary has reached 2898.6 U.S. dollars. This example well demonstrates the fact that China's economy has increased dramatically. 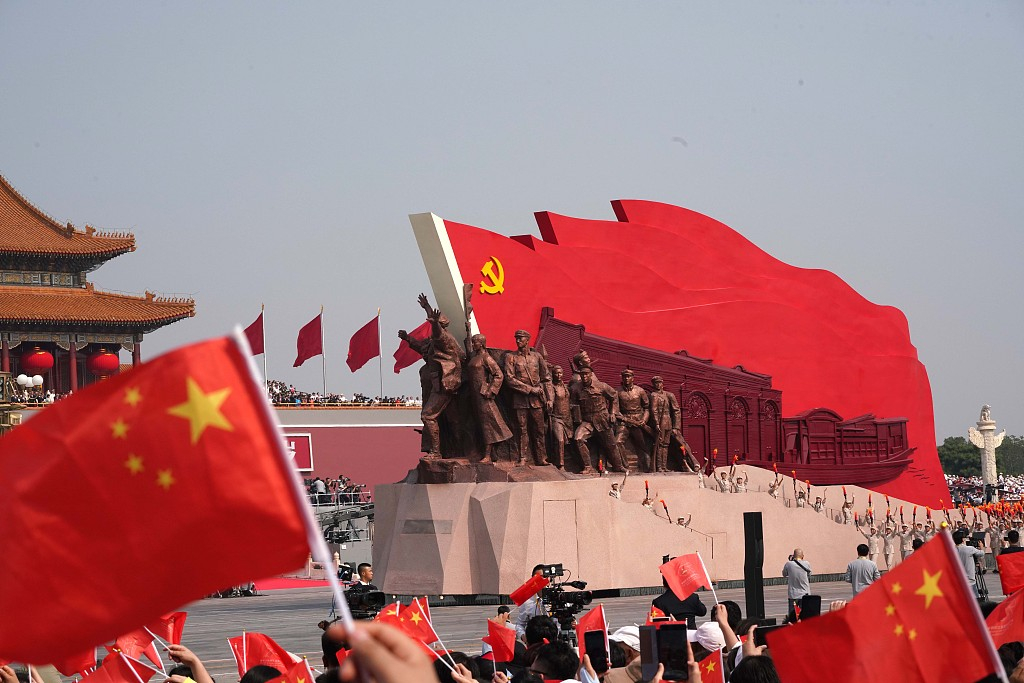 A grand celebration for the 70th anniversary of the founding of the People's Republic of China is being hold in Beijing, China, October 1, 2019. /VCG Photo

A grand celebration for the 70th anniversary of the founding of the People's Republic of China is being hold in Beijing, China, October 1, 2019. /VCG Photo

On the national level, the statistics are more impressive:

The government revenue also increased from 6.2 billion Chinese yuan in 1950 to 18.34 trillion in 2018, which provides a strong financial guarantee for further advancement and the betterment of people's livelihood.

In 1978, 770.39 million people lived under the poverty line. The figure dropped to 16.60 million in 2018. It's expected that 95 percent of the population in poverty under current standards will be lifted out of poverty by the end of this year, while eradication of absolute poverty is expected by the end of 2020. 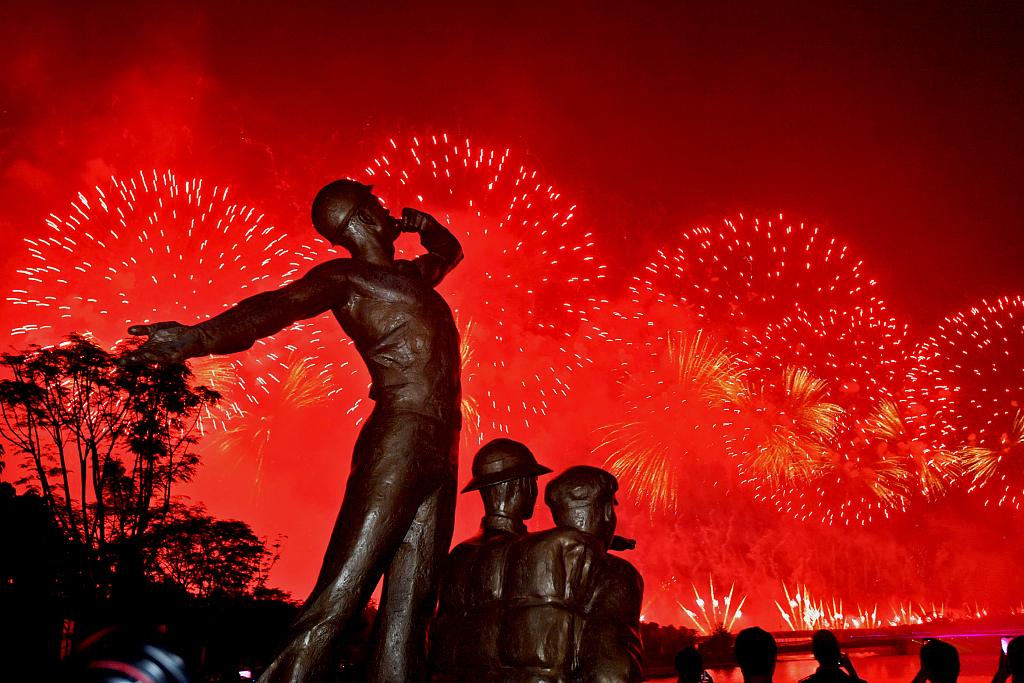 A firework show to celebrate the 70th anniversary of the founding of the People's Republic of China is being displayed in Shenzhen, China, October 1, 2019. /VCG Photo

A firework show to celebrate the 70th anniversary of the founding of the People's Republic of China is being displayed in Shenzhen, China, October 1, 2019. /VCG Photo

The above-mentioned facts and figures have proven that only the CPC can lead China, only socialism can save China, only reform and opening-up can promote China's development and only socialism with Chinese characteristics can lead to China's prosperity.

The second guideline shows China's determination to solve the issues concerning Hong Kong and Taiwan based on the principle of "peaceful reunification and one country, two systems" so as to maintain long-term prosperity and stability in Hong Kong and Macao and to promote a peaceful development of the relations across the Taiwan Strait for a complete reunification of the country.

Any outside interference aiming to disrupt China's efforts to maintain long-term prosperity and stability and to realize a complete reunification of the country are against the core interests of the Chinese people and thus doomed to failure.

The third and fourth guidelines clearly indicate that while China is becoming stronger in its overall strength, it is also committed to a path of peaceful development.

As the world's second largest economy, China wants to be a responsible major power in the world and to act as a builder of world peace, a contributor to global development and a defender of international order --- that's how China gets to where it is now.

A strong and modern military force is needed to protect China's own legitimate rights and interests while to contribute to world peace by fighting international terrorism. I'm confident that whatever lies ahead, China will have a better future --- to become a stronger while a more responsible country in the world.