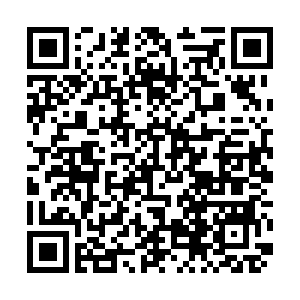 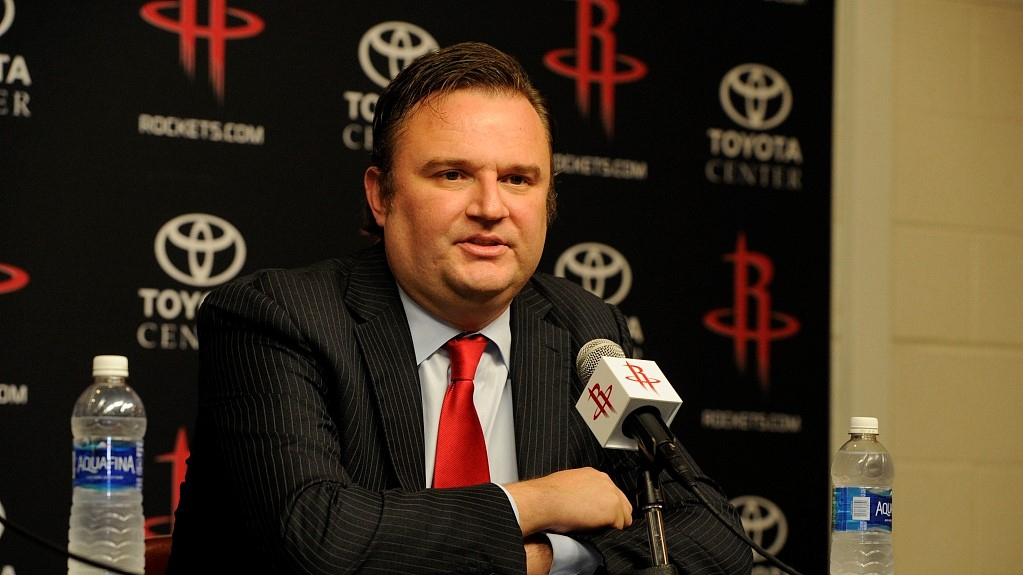 China Media Group (CMG) on Sunday night expressed opposition to the improper remarks of Houston Rockets general manager Daryl Morey on the current situation in China's Hong Kong Special Administrative Region (HKSAR) and decided to suspend the live-streaming of their games as well as cooperation and communication with the team.

CMG was joined by the Consulate General of the People's Republic of China in Houston in expressing dissatisfaction with the comments. "We are deeply shocked by the erroneous comments on Hong Kong made by Mr. Daryl Morey, general manager of the Houston Rockets. We have lodged representations and expressed strong dissatisfaction with the Houston Rockets, and urged the latter to correct the error and take immediate concrete measures to eliminate the adverse impact," said the Consulate General's spokesperson.

"At the moment, ending violence and chaos and restoring order has become the widest common consensus and the strongest appeal of all social sectors in Hong Kong. Anybody with conscience would support the efforts made by the Hong Kong Special Administrative Region to safeguard Hong Kong's social stability." 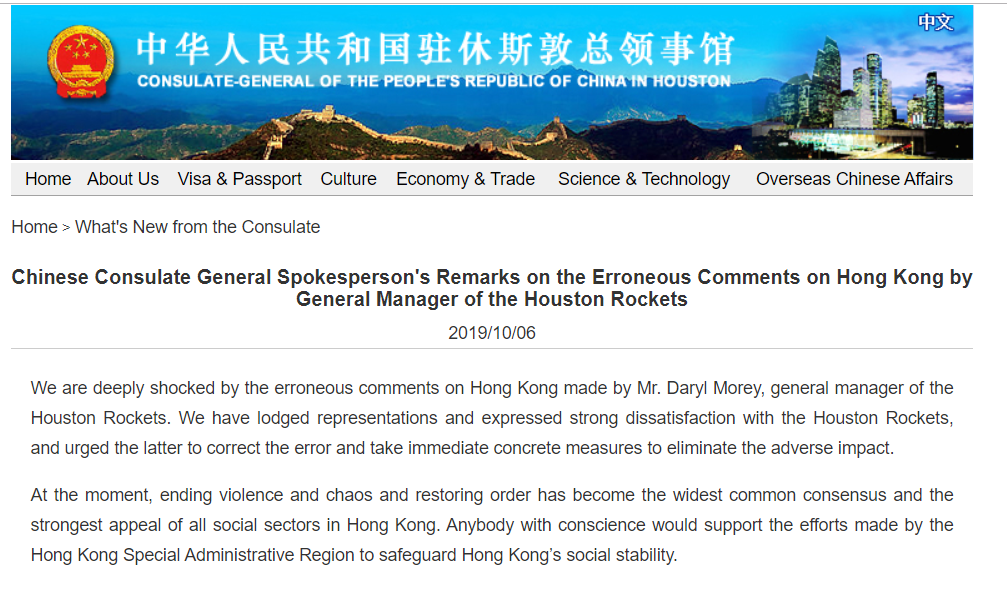 The Chinese Basketball Association (CBA) also expressed similar views over the issue as multiple Chinese enterprises announced they are terminating cooperation with the team.

Shanghai Pudong Development Bank Credit Card Center said it "opposes and protests against" Morey's "erroneous"remarks and has suspended all marketing and publicity activities related to the Rockets.

Sports brand Li Ning denounced the post and said it had stopped all forms of cooperation with the Rockets. Meanwhile, Shanghai Jiayin Finance Technology notified the Rockets that all partnerships between the two sides have been halted.

Tencent Sports, which signed a five-year, 1.5-billion-U.S.-dollar deal with the NBA in July, announced that all live streaming and news reporting of the Rockets will be suspended. It also gave customers, who bought a subscription to watch the Rockets games online, a chance to opt for another team. 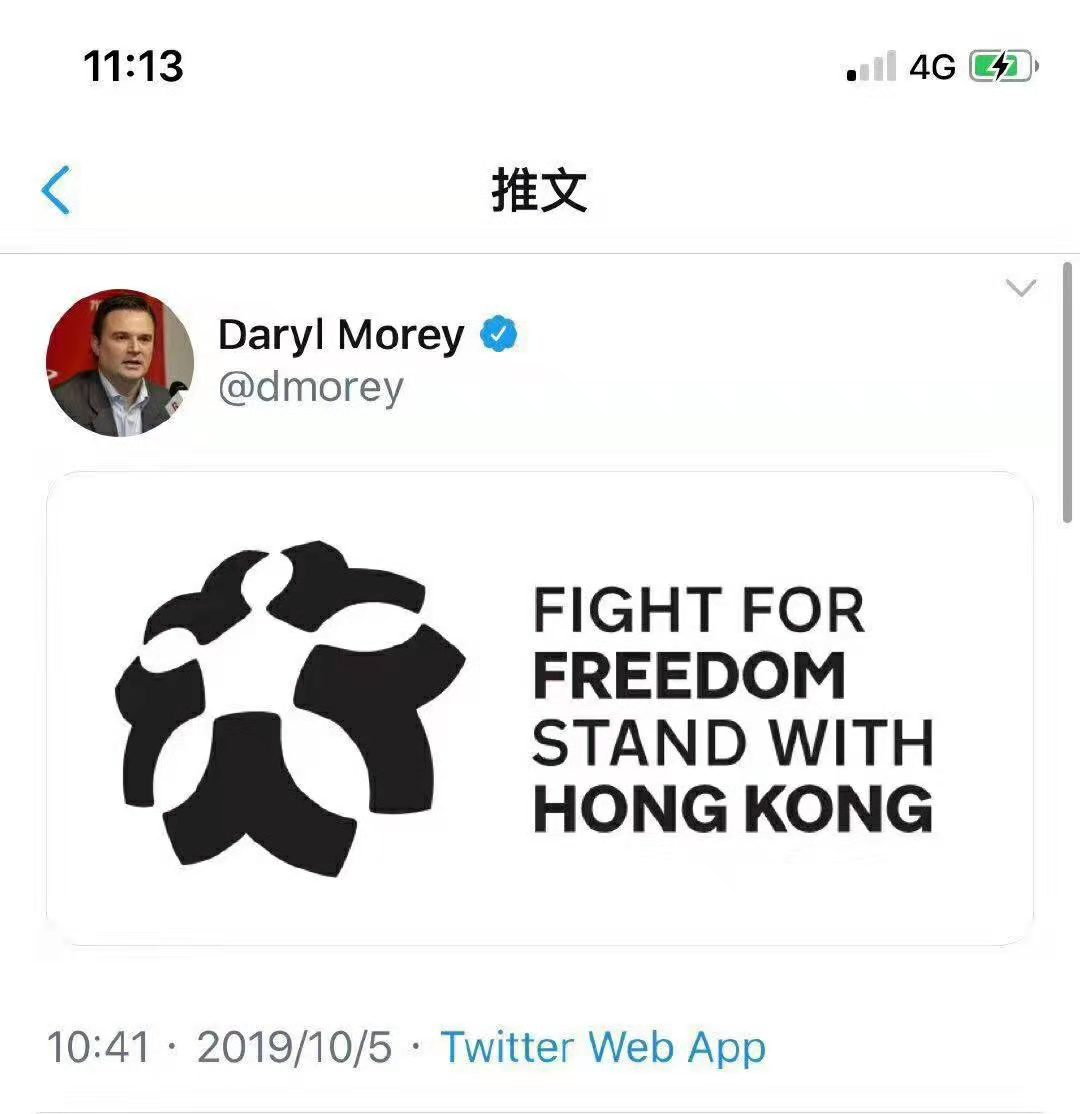 On Saturday, Morey posted a tweet in support of violent protests in Hong Kong, which was liked by ESPN's Adrian Wojnarowski. However, not everyone was supportive of such comments.

The CBA said they will suspend cooperation with the club over Morey's tweet, which has since been taken down.

Morey is currently in Japan with the team.

The owner of the Rockets tried to distance the team from Morey's post. "Listen....@dmorey does NOT speak for the @HoustonRockets. Our presence in Tokyo is all about the promotion of the @NBA internationally and we are NOT a political organization," said Tilman Fertitta on Twitter. 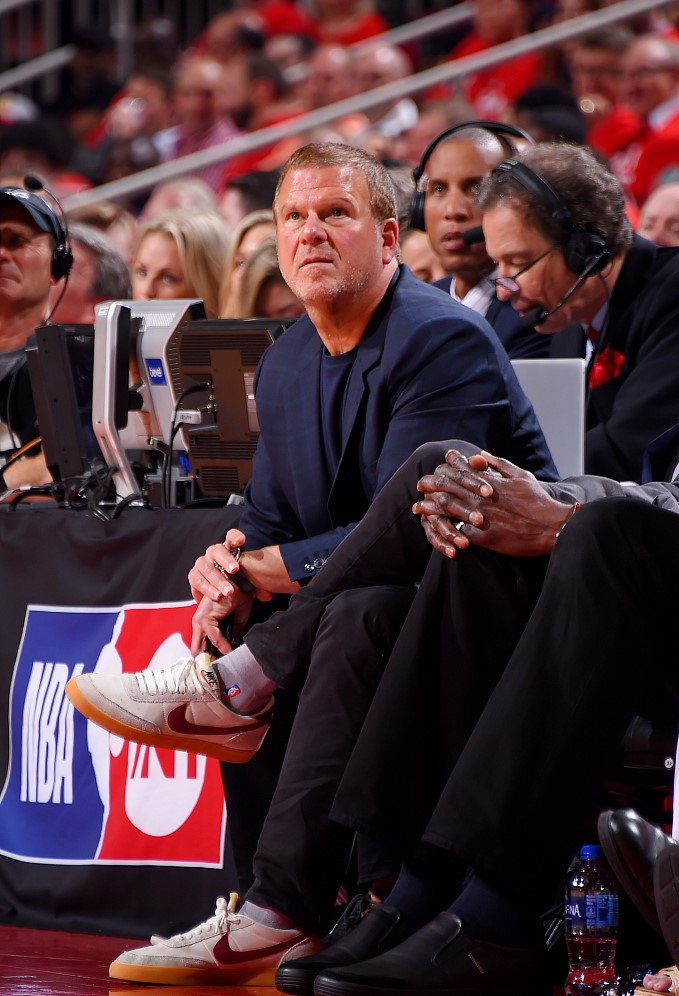 ESPN's Tim MacMahon quoted Fertitta as saying: "I have the best general manager in the league. Everything is fine with Daryl and me. We got a huge backlash, and I wanted to make clear that (the organization) has no (political) position. We're here to play basketball and not to offend anybody."

The NBA has so far been quiet over the matter.

Meanwhile, in the Chinese blogosphere, internet users, including die-hard Rockets fans, have voiced their vexation. Some demanded the Rockets fire Morey, some called on the basketball team to issue an official response, and others petitioned to boycott games of the Rockets until the team takes concrete actions. 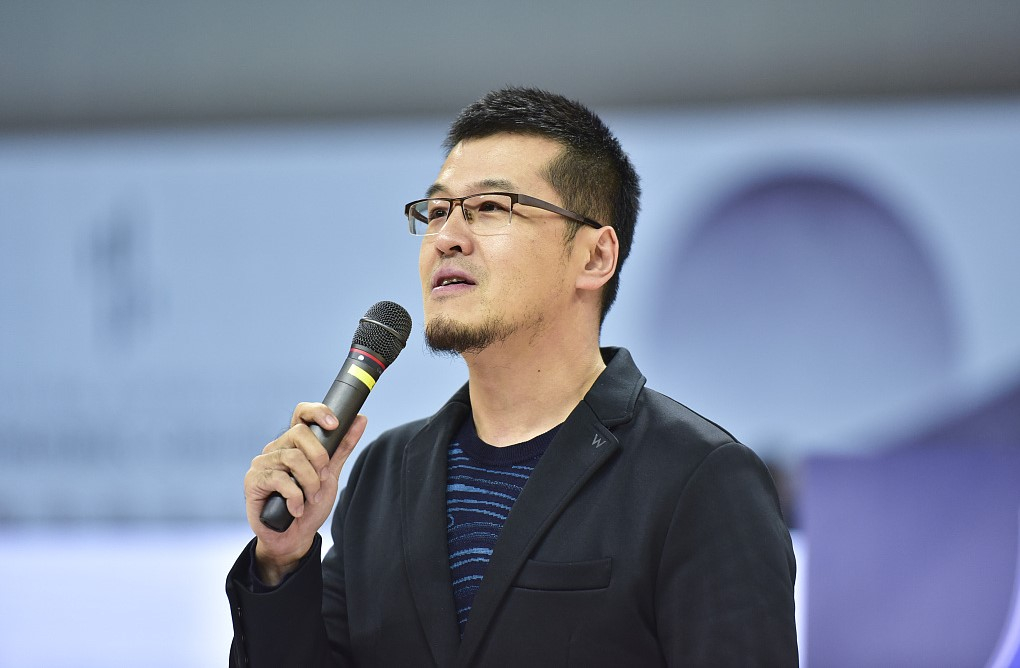 "I don't think they (Morey and Wojnarowski) are at liberty to make such remarks (on Hong Kong) without acquiring basic understanding of (China's) major social and political issues. Although Morey's remarks were brief, they are a reflection of long-term misunderstanding and distorting of Chinese society and politics," Yang said.

"The organizations they worked for have been benefiting from a peaceful, prosperous Chinese society and free trade for a long time. The Rockets have received funding from way too many Chinese companies in the past 17 years. In the past four years, ESPN enjoyed annual profits of over 10 million U.S. dollars. China needs to make these organizations pay for their actions," he added. 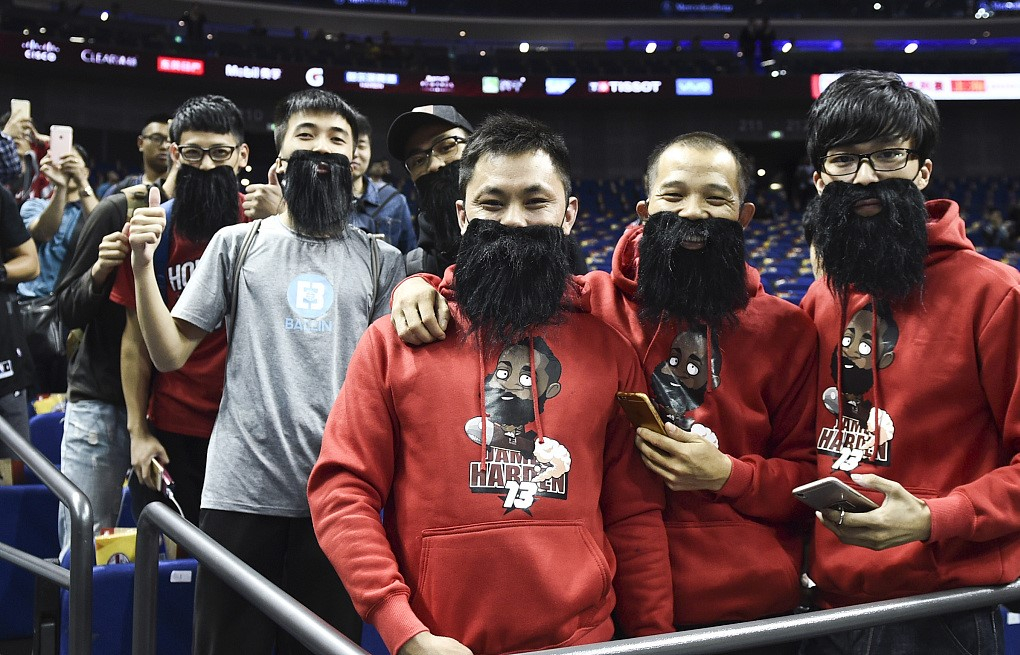 Chinese fans wear the signature beard of James Harden, the No. 1 player of the Houston Rockets. /VCG Photo

Chinese fans wear the signature beard of James Harden, the No. 1 player of the Houston Rockets. /VCG Photo

The Rockets have become Chinese fans' home team since they selected Yao Ming as the No. 1 pick in the 2002 draft. No team has received more support in China than the Rockets ever since. Even after Yao retired, Chinese fans stayed loyal to the Rockets, making them one of the most popular NBA teams in the country.

According to People's Daily, the club's Chinese partners include home decor company Scisky and internet giant Tencent among others. Beijing Yanjing Brewery, Peak Sports, Founder Group, Anta Sports and ZTE Corporation, all have had their advertisements at the Toyota Center, the home court of the Rockets.