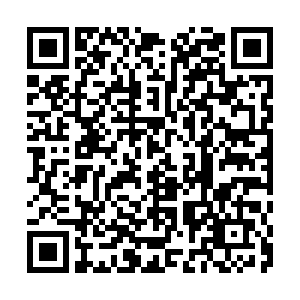 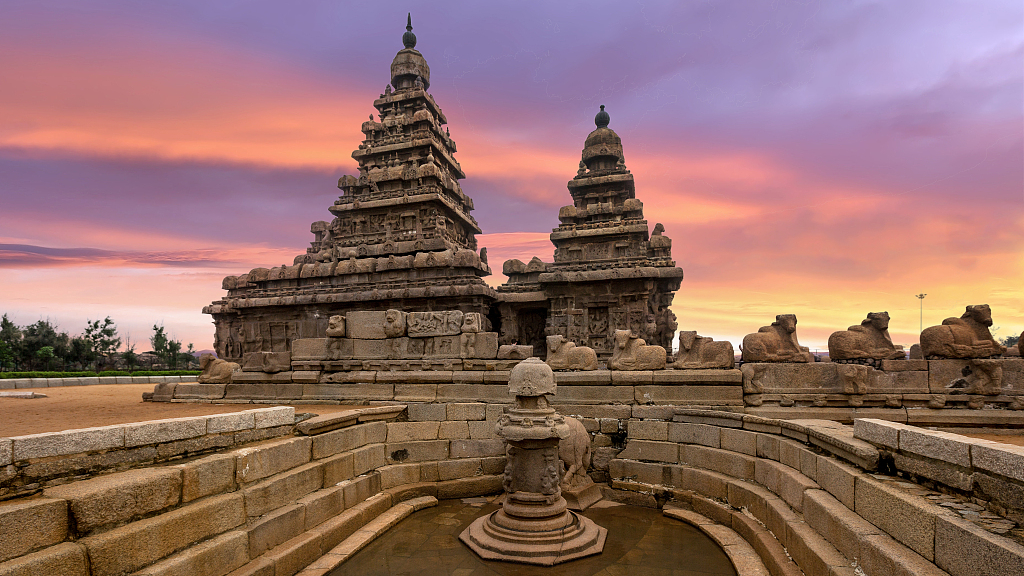 An ancient coastal town in southern India with historic trade ties with China dating back to 4th century CE is all set to host Chinese President Xi Jinping and Indian Prime Minister Narendra Modi for their much anticipated second informal summit later this week.

Xi's visit was confirmed by China's Ministry of Foreign Affairs and India's Ministry of External Affairs on Wednesday. The two leaders will meet in Mamallapuram in the southern Indian state of Tamil Nadu around October 11-12, according to Indian media reports. President Xi will then leave for Nepalese capital Kathmandu, where he will meet President Bidhya Devi Bandari on October 13.

Security around the ancient Indian port town, located about 50 kilometers south of state capital Chennai, has been tightened ahead of the crucial meeting, which follows from the first Xi-Modi informal summit held in April 2018 in Wuhan, the capital city of central China's Hubei Province.

Mamallapuram, also known as Mahabalipuram, flourished as a bustling seaport on the Bay of Bengal trading regularly with China. Archaeological excavations from around the ancient port has found Chinese coins from the 4th century CE. The town was also nicknamed "Seven Pagodas" due to its early depictions in history as a town with seven temples standing on its shore.

Xi and Modi are expected to visit the 7th-century Shore Temple complex – believed to be the only pagoda, of the legendary seven, to have survived in the ancient site. The Shore Temple is among the Group of Monuments at Mahabalipuram that was classified as UNESCO World Heritage Site in 1984.

The two leaders are likely to visit several other heritage sites and monuments including Pancha Rathas (Five Chariots monument complex), Krishna's Butter Ball (a massive round boulder perched on a steep rocky slope) and Arjuna's Penance (a gigantic open air bas-relief sculpted out of pink granite). 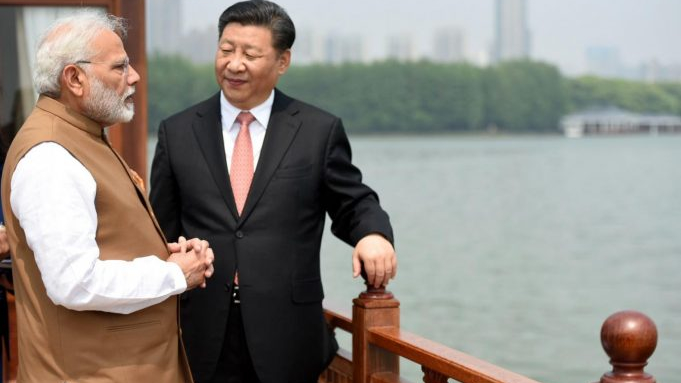 The Archaeological Survey of India has spruced up the heritage sites with world class illumination, installation of new stone flooring, and a dash of fresh green with pruned trees and trimmed landscape for the summit, The Hindu newspaper reported.

As part of the safety arrangements ahead of the summit, a Chinese delegation was given an inspection tour of Mamallapuram, including the heritage monuments, on September 20. The Chinese officials were accompanied by members of India's Special Protection Group (SPG), the agency responsible for providing security to the prime minister, and state security and intelligence officials.

The Chinese delegation took stock of various aspects, including security and amenities and looked into the line-up of proposed events during the informal summit, Press Trust of India (PTI) news agency reported. "The Chinese side made some suggestions in respect of fine-tuning exclusive amenities to President Xi at Mamallapuram and it was accepted," an official, who was privy to the discussions, told PTI.

After visiting the monuments, the Chinese team comprising high-level committee and security officials examined at length the security aspects at the local star hotels – Taj Fishermen's Cove and GRT hotels – where the two leaders and their delegations plan to stay during the summit, The Times of India reported.

Later, the Chinese delegation held discussions with local district officials and also interacted with some workers in the cottage industries that have spawned around Mamallapuram which produce homemade products using shells and conches, The Times reported. Citing sources, the report claimed that President Xi is expected to interact with some of the local product makers. 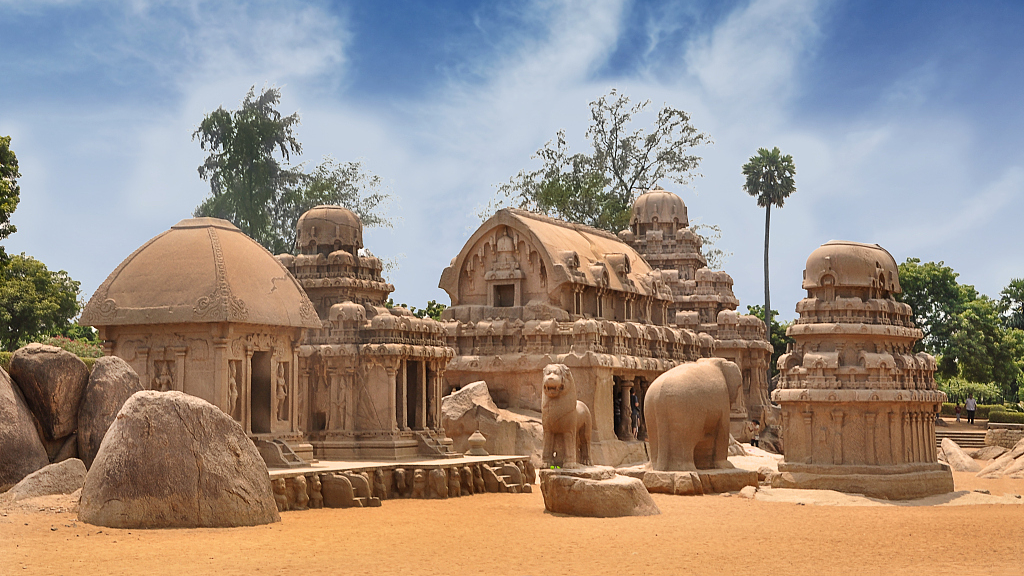 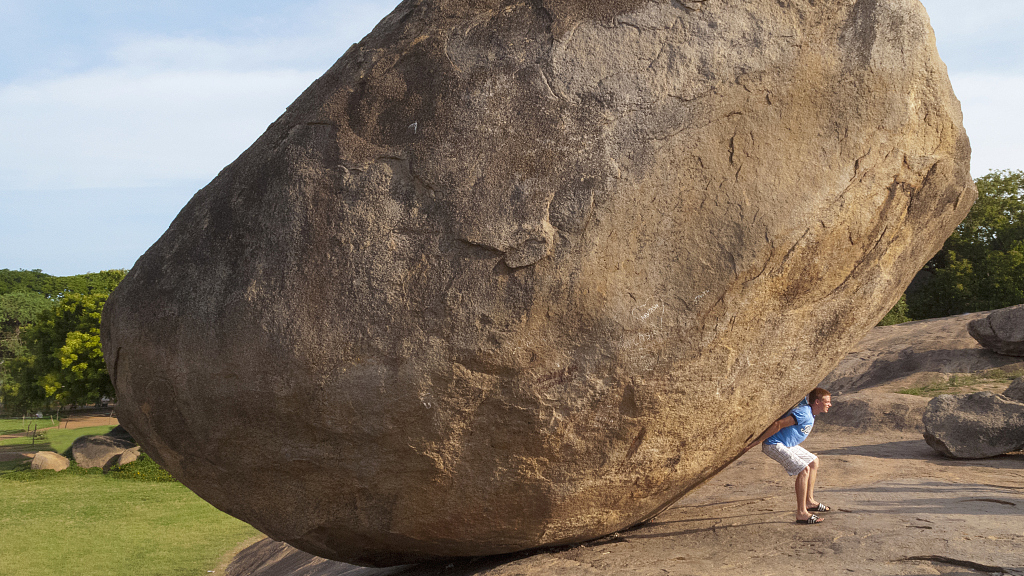 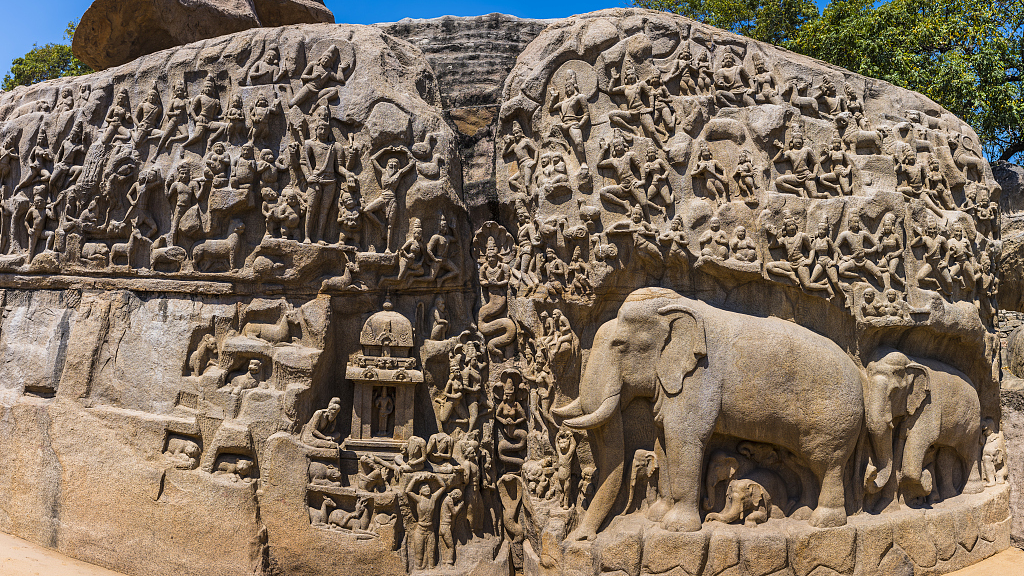 The Descent of the Ganges, also known as Arjuna's Penance, in Mahabalipuram, Tamil Nadu, India. It is one of the largest rock reliefs in Asia. /VCG Photo

The Descent of the Ganges, also known as Arjuna's Penance, in Mahabalipuram, Tamil Nadu, India. It is one of the largest rock reliefs in Asia. /VCG Photo

Mamallapuram is believed to have had historical trade ties with China dating back to over 1,700 years. The town was one of the two major port cities under the Pallava dynasty that became a major power in southern India from the 3rd to the 9th centuries CE.

The Pallava kings ruled Mamallapuram from Kanchipuram, the imperial capital of the dynasty and a strong center of Buddhism. The Pallavas used the port city to establish trade and diplomatic missions to Sri Lanka, Southeast Asia and as far as China. The port town became a gateway for exports and imports to and from China for nearly seven centuries of Pallava's reign.

Famous Chinese monk and traveler Xuanzang (whose adventures are documented in popular Chinese classical novel "Journey to the West") visited Kanchipuram in 640 CE and lauded the benign rule of the Pallavas.

"Delegations from both sides used to travel between China and Tamil Nadu (South India). Mamallapuram was a thriving port till the end of Pallava era around the 9th century CE," said C Santhalingal, archaeologist and secretary of Madurai-based Pandya Nadu Centre for Historical Research. 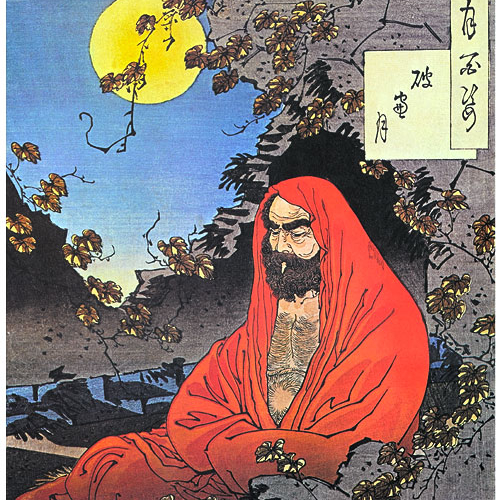 An illustration of Bodhidharma by Japanese artist Tsukioka Yoshitoshi dating back to 1887. /Photo via Wikimedia Commons

An illustration of Bodhidharma by Japanese artist Tsukioka Yoshitoshi dating back to 1887. /Photo via Wikimedia Commons

In the 8th century, the Pallavas also entered into a defense pact with the Tang Dynasty (618-907) in China, according to Kayal Barabhavan, author of "Bodi Dharma," a four-part Tamil novel based on the history of Pallava dynasty.

"The agreement between Chinese rulers and Pallava King Raja Simhan II or Narasimhavarman II during the early 8th century was the first strategic pact on security between the two kingdoms," Barabhavan was quoted as saying in a report by The Times. A piece of silk cloth with the printed declaration was sent by a Chinese delegation to Narasimhavarman II, he added.

The trade and defense link between the Tang and Pallava dynasties also finds a mention in historian K A Nilakanta Sastri's book on the history of South India, according to Barabhavan. He noted that Buddhist monk Bodhidharma, an iconic figure in China, was the third prince of a Pallava king. "He (Bodhidharma) traveled from Kanchipuram through Mamallapuram to China in 527 CE and became the 28th patriarch of Buddhism succeeding Prajnatara," the Tamil author elucidated.

With Mamallapuram as the backdrop for the informal summit, observers will keep a keen eye on Xi and Modi as they attempt to revitalize the historical trade and strategic ties between the two Asian giants.