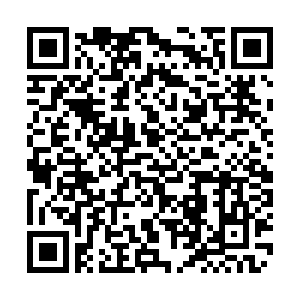 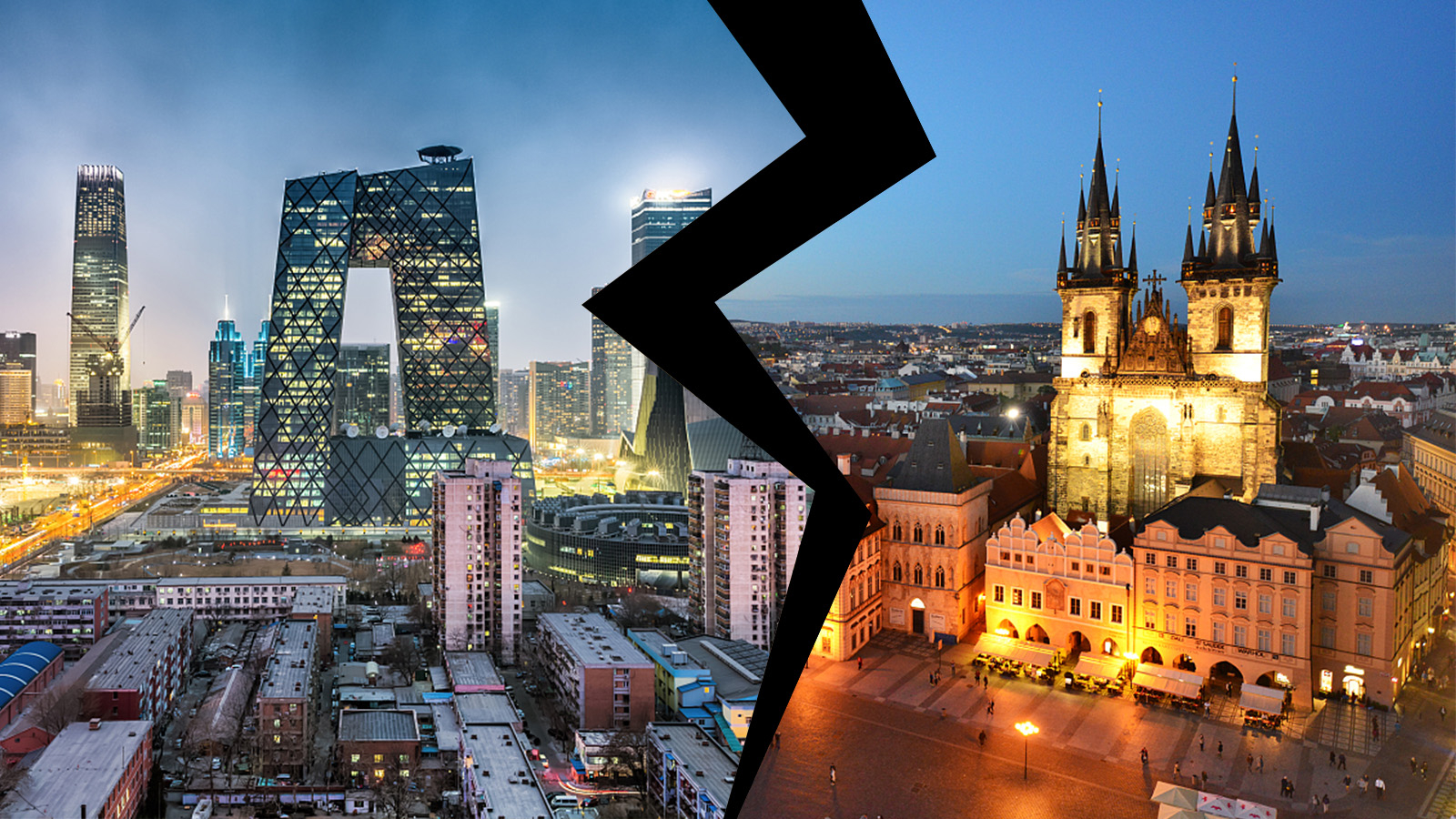 China on Thursday hit back at the city government of Prague for failing to respect China's core interests that led to the severance of sister-city ties between Beijing and the Czech capital.

Beijing and Prague earlier this week scrapped the three-year-old twinning deal triggered by the Czech capital's unilateral backing out of a clause on one-China policy ingrained in the agreement.

"They were grossly interfering in China's internal affairs, openly challenging Prague's sister-city relations with Beijing, and seriously undermining the political precondition and foundation for exchanges between the two cities. In light of the negative impact produced by the above, Beijing has announced its decision to end the sister-city relationship with Prague and suspend all official interactions," Geng added.

Beijing municipal government terminated the deal on Tuesday in a retaliatory move after the Prague City Council voted on Monday to pull out of the agreement. 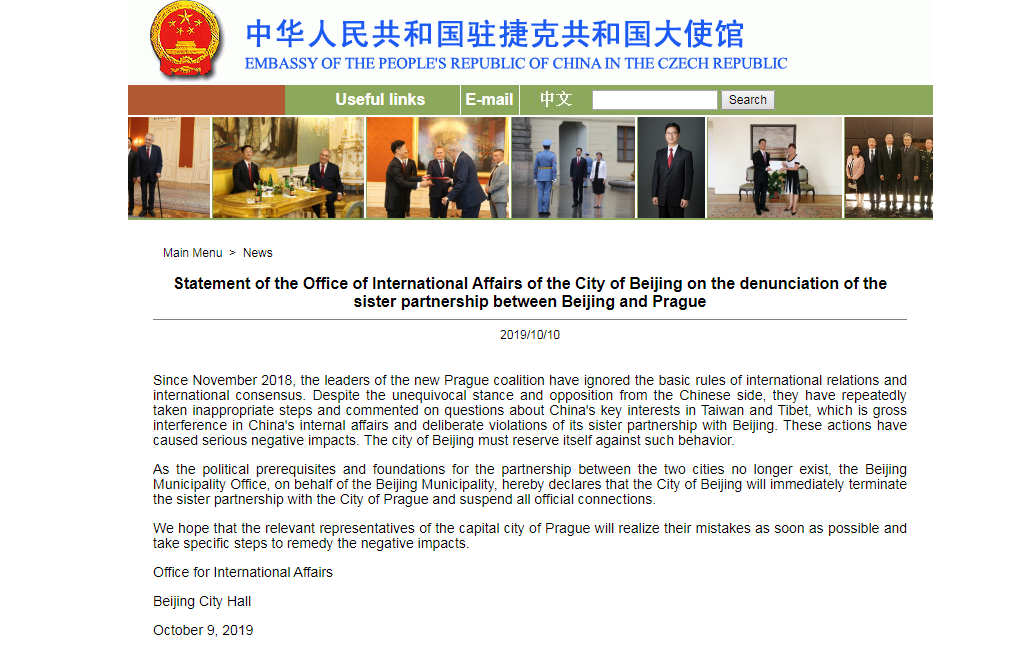 A screenshot of the statement of Beijing City Hall (Municipality) posted on the official website of the Chinese Embassy in Czech Republic. /CGTN Photo

A screenshot of the statement of Beijing City Hall (Municipality) posted on the official website of the Chinese Embassy in Czech Republic. /CGTN Photo

"We hope that the relevant representatives of the capital city of Prague will realize their mistakes as soon as possible and take specific steps to remedy the negative impacts," it added.

The sister-city agreement was signed by Prague's previous municipal authorities led by then mayor Adriana Krnacova in 2016 ahead of Chinese President Xi Jinping's visit to the Czech capital. The sister-city pact stated that Prague would "respect the one-China policy and acknowledge Taiwan as an inseparable part of the Chinese territory."

Disagreement on the deal broke out soon after the municipal polls in November 2018 which saw Zdenek Hrib from the Czech Pirate Party being elected as the new mayor of Prague. Hrib called for amendments to the Beijing-Prague sister-city agreement suggesting the exclusion of the clause acknowledging the one-China policy leading to the City Council's Monday vote.

The council's decision still has to be approved by the City Assembly but that is now made redundant following the Beijing municipality's decision. 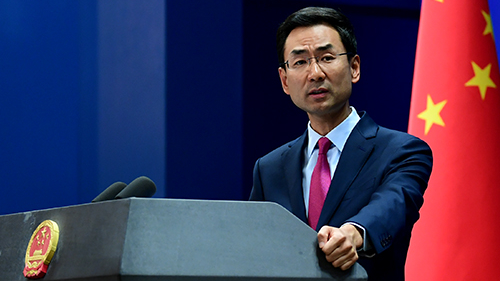 The Chinese Foreign Ministry on Thursday noted that prominent public figures from Czech Republic, including President Milos Zeman, have rebuked the Prague City Council's decision. Zeman is a vocal supporter of warm ties with China.

"We have noted that people with insight from all sectors in Czech, including political leaders such as President Zeman, have condemned the wrong moves of the Prague city government. I would like to stress that continued progress in the China-Czech strategic partnership on the basis of mutual respect, equality and mutual benefit serves the interests of both sides," Geng said.

"We hope the Prague city government will recognize and correct its mistake as soon as possible and work to create conditions for the resumption of exchanges and cooperation," the spokesperson added.

Earlier, the Chinese Embassy in Prague released a statement describing Prague's unilateral decision as a "breach of trust" and damaging to "Sino-Czech relations," while also emphasizing that respecting the one-China policy was crucial to China's cooperation with other countries. 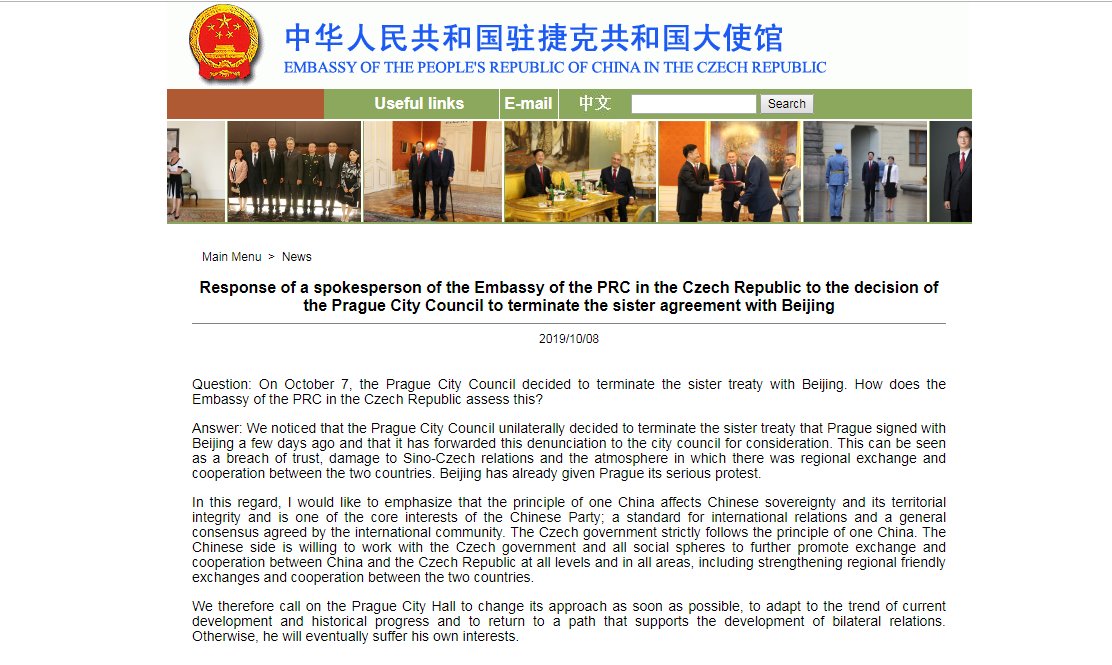 A screenshot of the statement by the Chinese Embassy in Czech Republic posted on its official website.

A screenshot of the statement by the Chinese Embassy in Czech Republic posted on its official website.

"The principle of one-China affects Chinese sovereignty and its territorial integrity and is one of the core interests of the Chinese side; a standard for international relations and a general consensus agreed by the international community," the Chinese Embassy statement noted.

"The Czech government strictly follows the principle of one-China. The Chinese side is willing to work with the Czech government and all social spheres to further promote exchange and cooperation between China and the Czech Republic at all levels and in all areas, including strengthening regional friendly exchanges and cooperation between the two countries," it stated.

Meanwhile, Czech Foreign Minister Tomas Petricek has reiterated the Czech government's commitment to the one-China policy regardless of Prague city government's position even as he noted that "threats have no place in diplomacy."