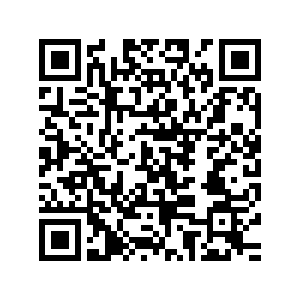 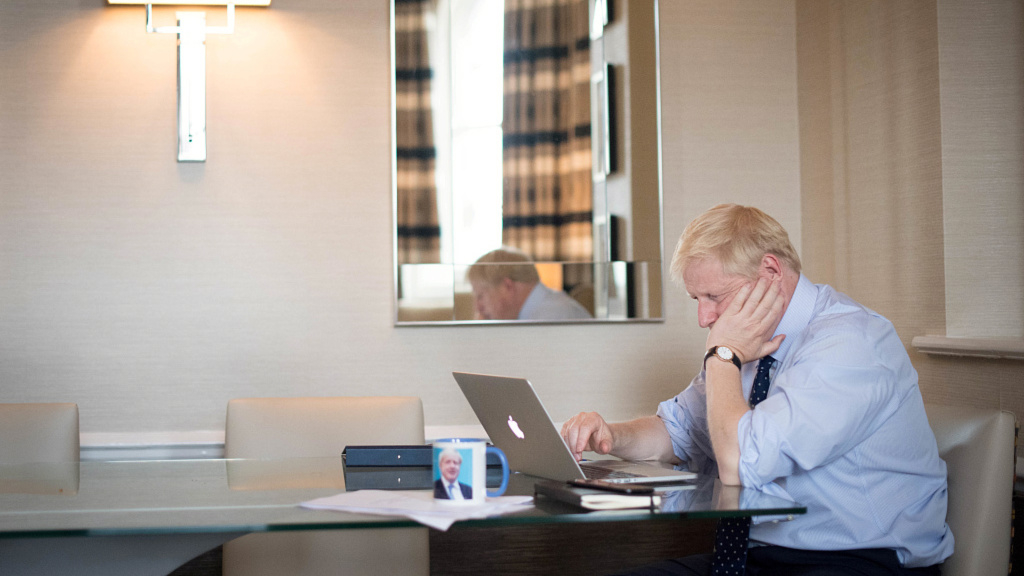 Could we be on the brink of a Brexit deal? According to the Guardian newspaper, this could be the case, as frantic negotiations continue between UK Prime Minister Boris Johnson and his European counterparts. With the crucial meeting of all the EU members' leaders coming up in Brussels on October 17, Johnson was in deep negotiations on Tuesday to try to shape a deal. At one point in proceedings, he was given a deadline by the EU of midnight Tuesday to present a deal that was acceptable, and could be taken forward to Thursday's crucial summit.

Tuesday's negotiations centered around the thorny issue of the Irish border, which is the major stumbling block to a deal being agreed. It is being reported that Mr. Johnson has made a major concession towards the EU position by agreeing to an Irish border within the Irish Sea (the so-called Northern Ireland only backstop) rather than between Northern and Southern Ireland. 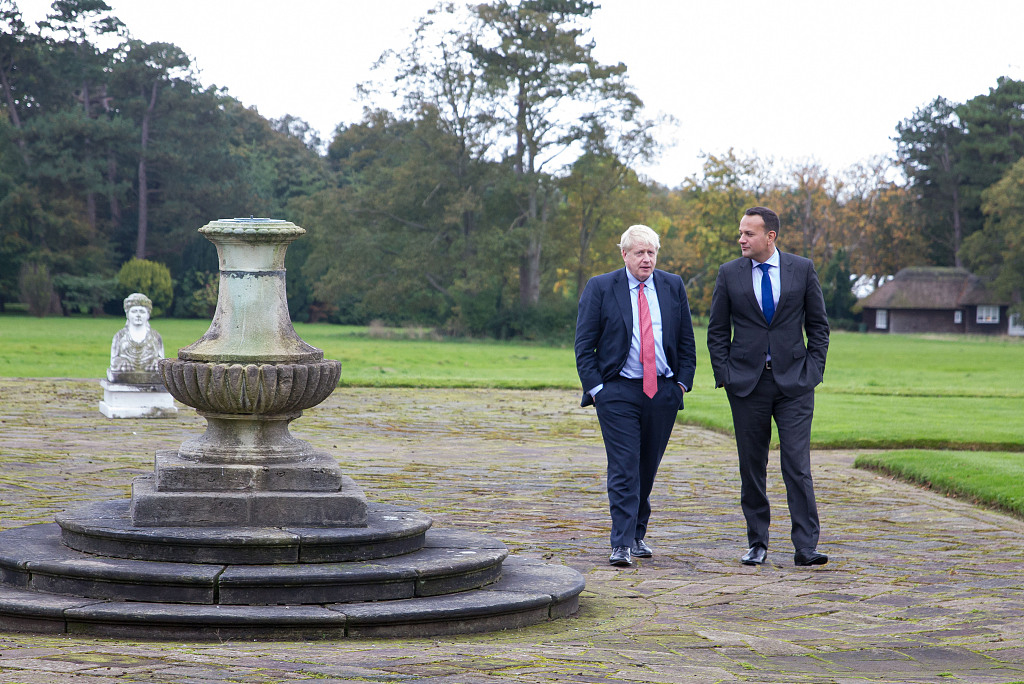 As one commentator puts it, this tentative agreement means that "Northern Ireland would be de jure (legally) in the UK's customs territory, but de facto (in reality) in the European Union's." In other words, in a strange, alternative universe, Northern Ireland is both leaving the EU with Britain, and is not. This proposal was put by the EU to Theresa May when she was Prime Minister, but she rejected it as something that a British Prime Minister would never sign up to.

So why is Boris signing up to it now? Well, time is running out. There are classic academic models of bargaining theory in economics that show that, as deadlines approach, the bargaining power shifts to the party that is under less pressure, and has less to lose if the deal breaks down. In this case, this is the EU.

At such a late stage, with poor old Britain, on its own, bargaining against the 27 members of the EU, the EU has the bargaining power. Thus, we are now moving back towards a deal that could have been agreed with Theresa May as PM in the past couple of years: but she would not make the concession on the Irish border. Under time and bargaining pressure, Boris Johnson is prepared to make that concession on the Irish border in the sea!

In bargaining theory, a party's position is strengthened by having the option to walk away with no deal. Boris Johnson has already claimed that the Benn Act, by removing Britain's no deal option, has "cut the legs" away from our bargaining power in the negotiations. However, House of Commons Brexit analyst Stefano Fella has examined the complex Brexit scenarios that could still unfold in the coming weeks. The spaghetti-like flow-chart that he has produced has shown that a no-deal Brexit could still occur, either on the deadline day of October 31, or beyond. 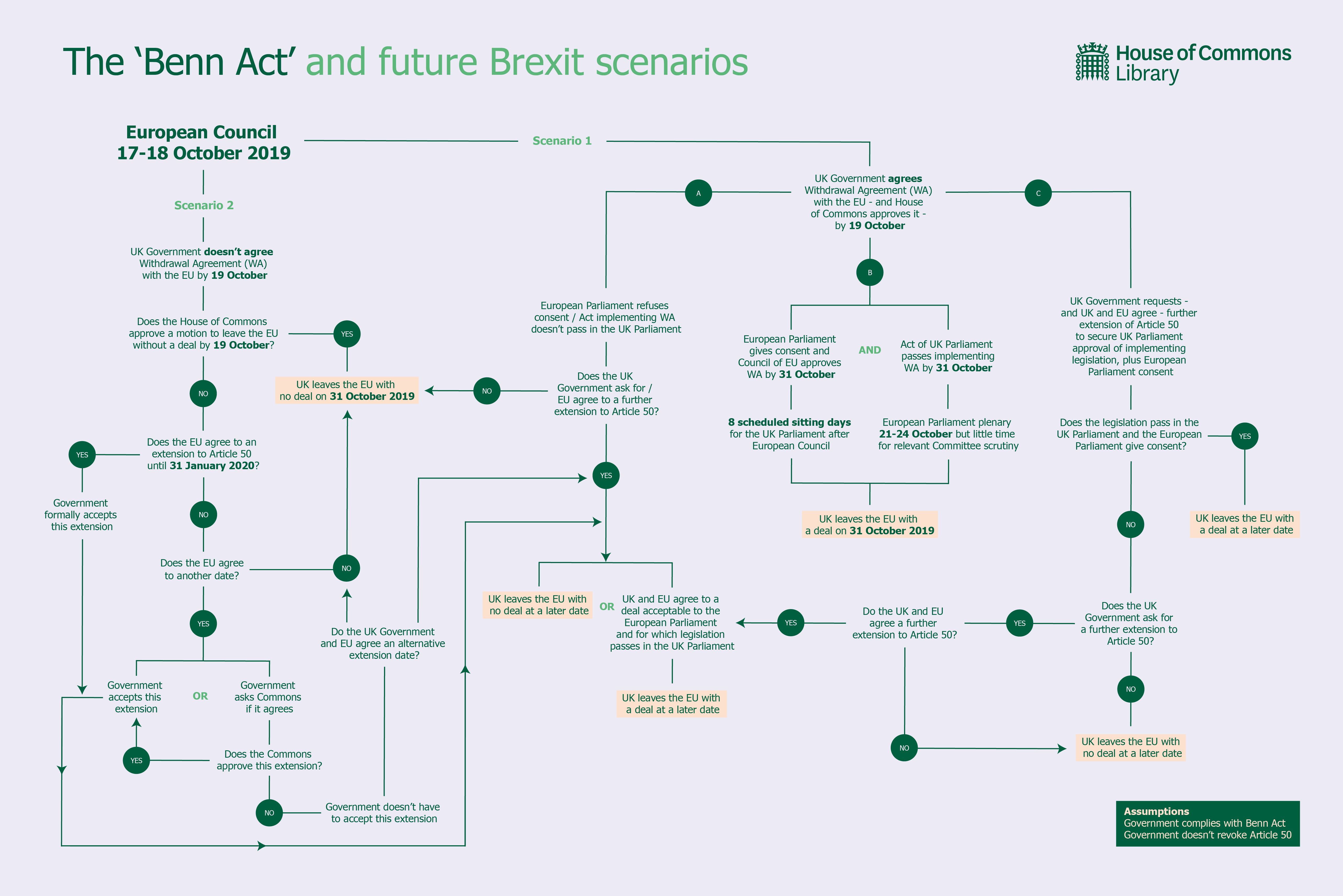 Photo by courtesy of House of Commons Library.

Photo by courtesy of House of Commons Library.

In my opinion, what the flow-chart shows is that the situation is very complex, and goes beyond economics. The pathway through this flow-chart will depend on politics, power between varying factions, psychology, emotions. And brinkmanship (who is prepared to take the situation to the limits? Who will blink first?), this applies both between Britain and the EU, and domestically, back home at Westminster.

As the flowchart shows, if the EU agrees to the deal on Thursday (and that is a big "if", as the 27 members will pore through all the details, and all of them have to agree to it), it then has to come back and be agreed by, and voted upon, by the British MPs in the House of Commons in their special, extraordinary sitting on Saturday, October 19.

The deal on the Irish backstop has to be agreed by the various parties representing Ireland (including the Democratic Unionist Party, who is against the border in the Irish Sea at the moment). Furthermore, Boris Johnson will need to win over many opponents, including the Conservative rebels and those expelled from his party, and labor MPs, to get his deal through.

A further complication, not considered in the flow-chart, is that some factions are considering responding to any deal agreed at the EU, on Thursday, by pushing on Saturday for a fresh people's referendum on Brexit: this threat to Johnson has been articulated most clearly by the Lib-Dems. It is clear that, with the official Brexit deadline of October 31 fast approaching, there are still many barriers to Johnson getting a deal "over the line."