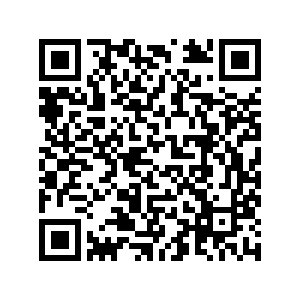 China observes its sixth National Poverty Relief Day on Thursday, which falls on October 17 every year, the same day as the International Day for the Eradication of Poverty of the United Nations.

China is en route to delivering its target of eradicating poverty in rural areas and eliminating regional poverty by 2020. Here are five key points about China's fight against poverty.

1. How many Chinese people are living in poverty?

The country saw the number of impoverished rural residents decline from nearly 100 million in late 2012 to 16.6 million by the end of 2018, as showed by data from China's National Bureau of Statistics. 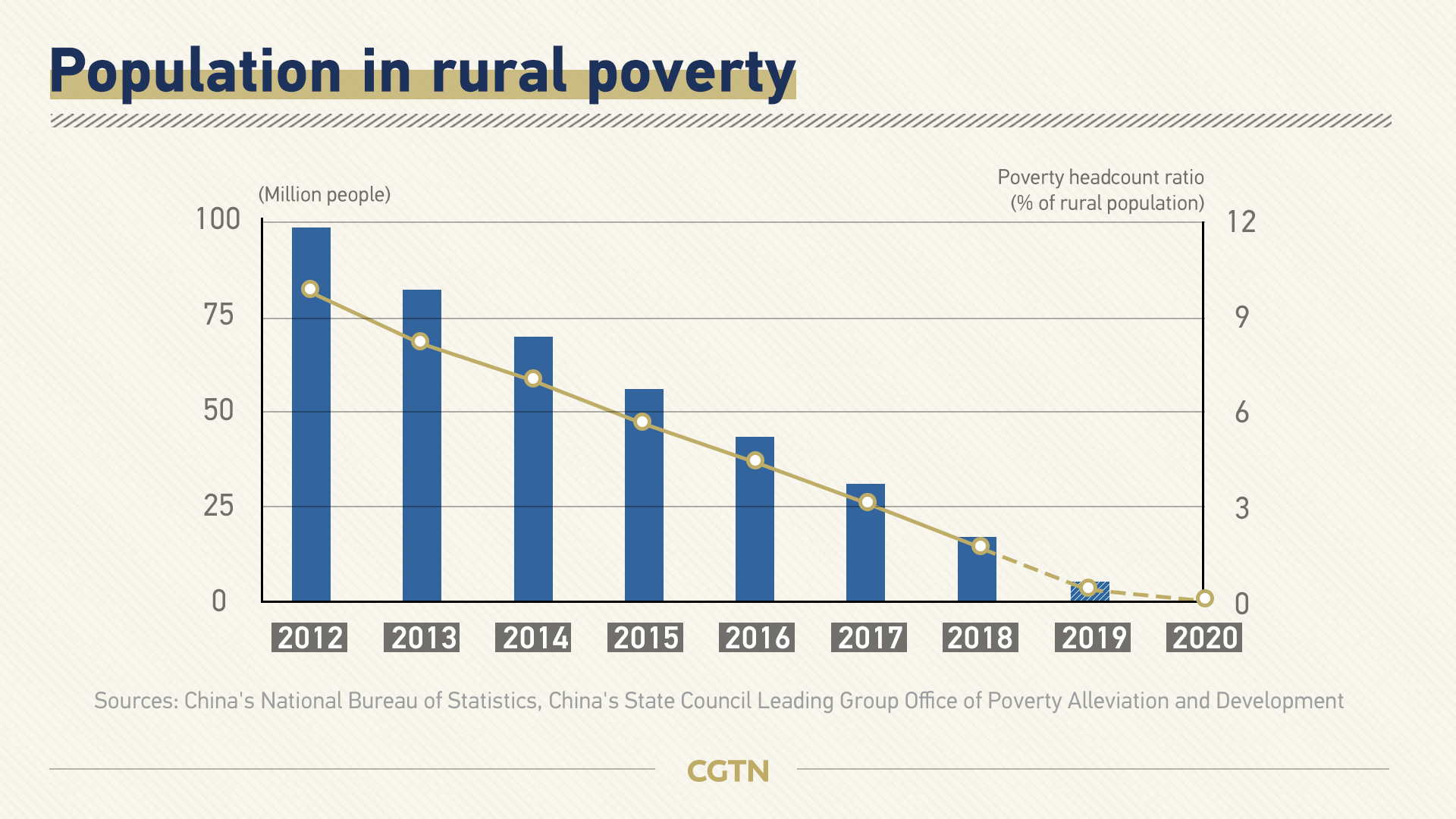 And the proportion of rural residents living below the poverty line fell from 10.2 percent in 2012 to 1.7 percent last year.

The State Council Leading Group Office of Poverty Alleviation and Development vowed to continue to work vigorously to reduce poverty and lift no fewer than 10 million people out of poverty in 2019, to lay a solid foundation for winning the battle against poverty.

Ninety-five percent of the country's poor population will escape poverty by the end of this year, China's top poverty relief official Liu Yongfu said last week, meaning their poverty rate should drop below 3 percent, or 2 percent in some eastern provinces.

2. What does it mean to eliminate poverty completely by 2020?

Since taking office in 2012, Chinese President Xi Jinping has made eradication of absolute poverty the threshold requirement for establishing a "moderately prosperous society" in all respects by 2020.

At the Fifth Plenary Session of the 18th Communist Party of China (CPC) Central Committee held in October 2015, the CPC further specified the task of eliminating rural poverty and rehabilitating all impoverished counties by 2020. 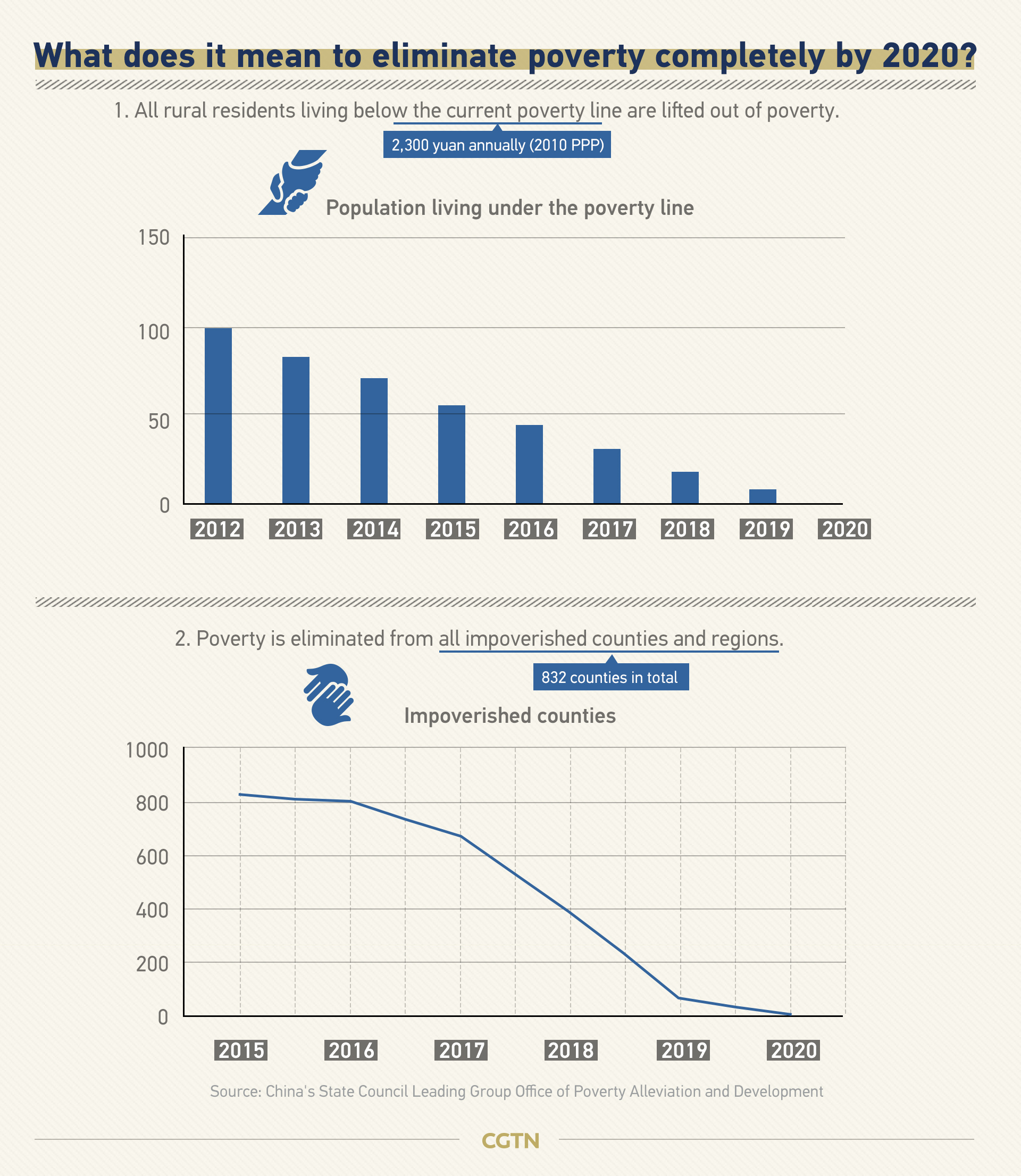 "We must ensure that by the year 2020, all rural residents living below the current poverty line have been lifted out of poverty, and poverty is eliminated from all poor counties and regions," Xi said in a report delivered to the 19th National Congress of the CPC in 2017.

3. What is the poverty line? 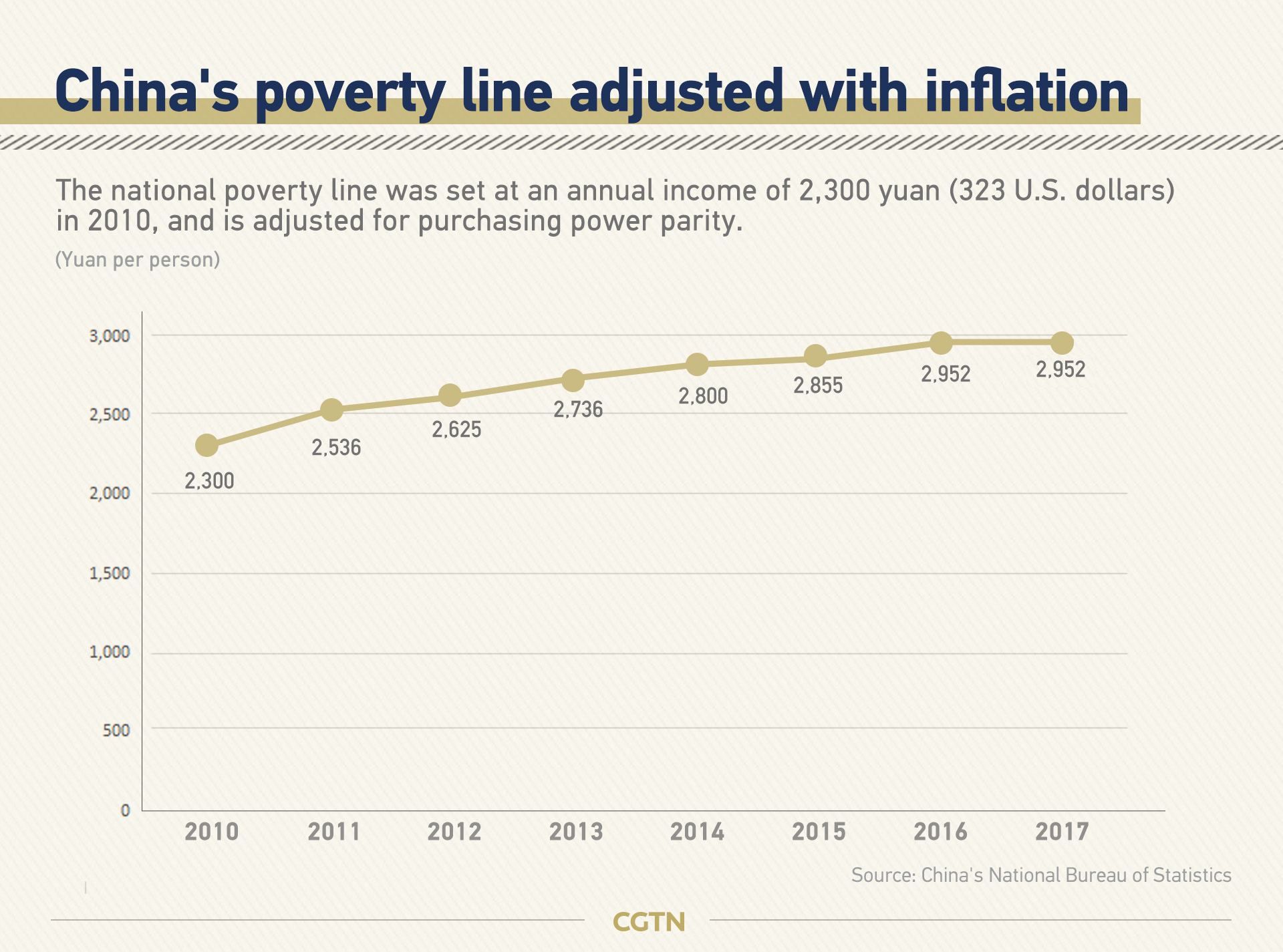 What is the international poverty line?

In China, a rural person is poor if they earn less than what 6.3 yuan could buy a day in rural China in 2010. 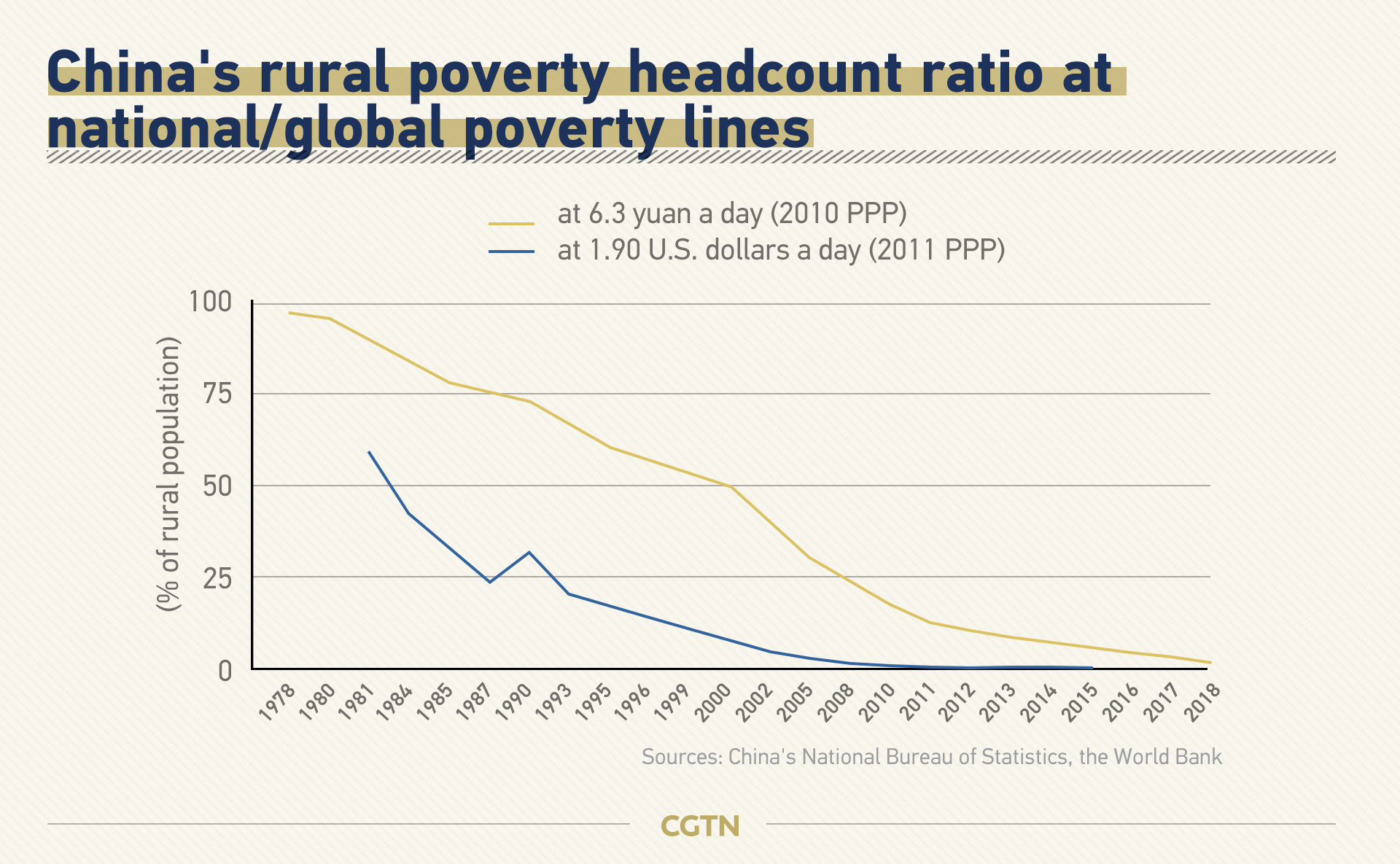 Seen from the graphic above, by the international standard, China has a smaller proportion of rural population living in poverty, meaning China set its standard for poverty higher than the World Bank's global standard.

However, that doesn't support the rationality of China's poverty line after 2020. As most of the impoverished population currently defined by the standard have been lifted out of poverty, the next step would be updating the line.

On the other hand, China's 2020 anti-poverty goal is focused on absolute rural poverty. But in real combat against poverty, the central government and local governments face large urban-rural gap and regional disparity. Therefore, the completion of the 2020 poverty alleviation goal is not the end of the poverty fight, but it indicates that the country's poverty alleviation work will enter a new stage characterized by transformational secondary poverty and relative poverty.

4. How has China managed to end domestic poverty?

Under the targeted poverty relief campaign, officials are forbidden from merely handing out relief funds without finding ways of attaining sustainable incomes. Instead, a thorough assessment of the local resources, environmental conditions and culture was carried out and tailored relief plans drawn up for each impoverished county.

In 2018, the average annual income of rural residents in impoverished areas rose to 10,371 yuan (about 1,530 U.S. dollars) with an inflation-adjusted year-on-year growth of 8.3 percent. 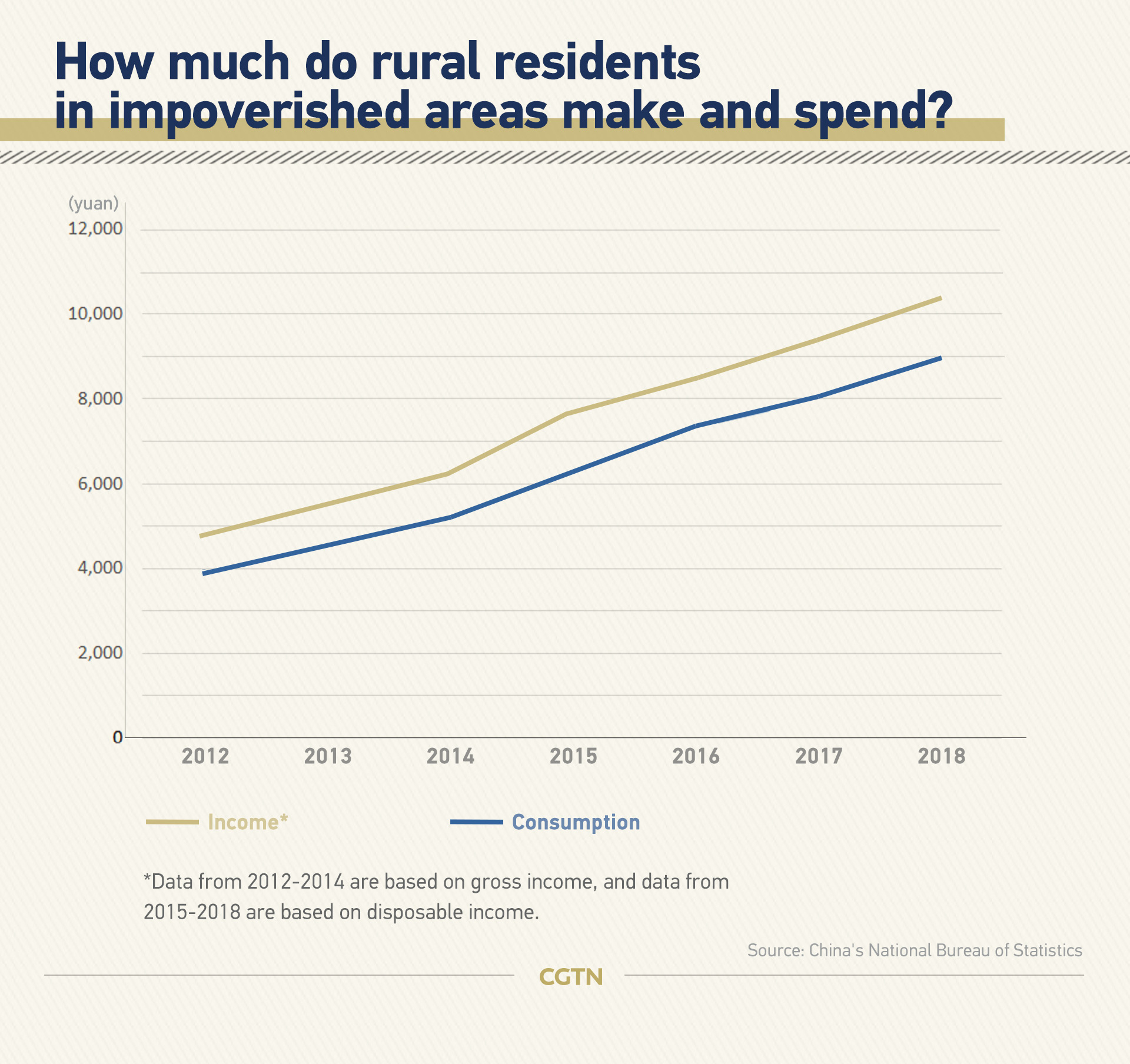 Moreover, the living conditions and public services for rural residents in impoverished areas have been markedly improved.

According to China's guideline on winning the battle against poverty, the government identified that China's poverty reduction should guarantee access to food and clothing for poor population and nine-year compulsory education for children from low-income families. Basic medical needs and good living conditions for the indigent population should also be guaranteed.

5. What can the world learn from China in fighting against poverty?

Poverty eradication is a common goal for all of humankind. The World Bank estimates that the number of extremely poor people globally – those who live on 1.90 U.S. dollars a day or less – has fallen from 1.85 billion in 1990 to about 736 million in 2015. During the same period, China had helped 602.7 million people escape poverty, accounting for 54 percent worldwide. 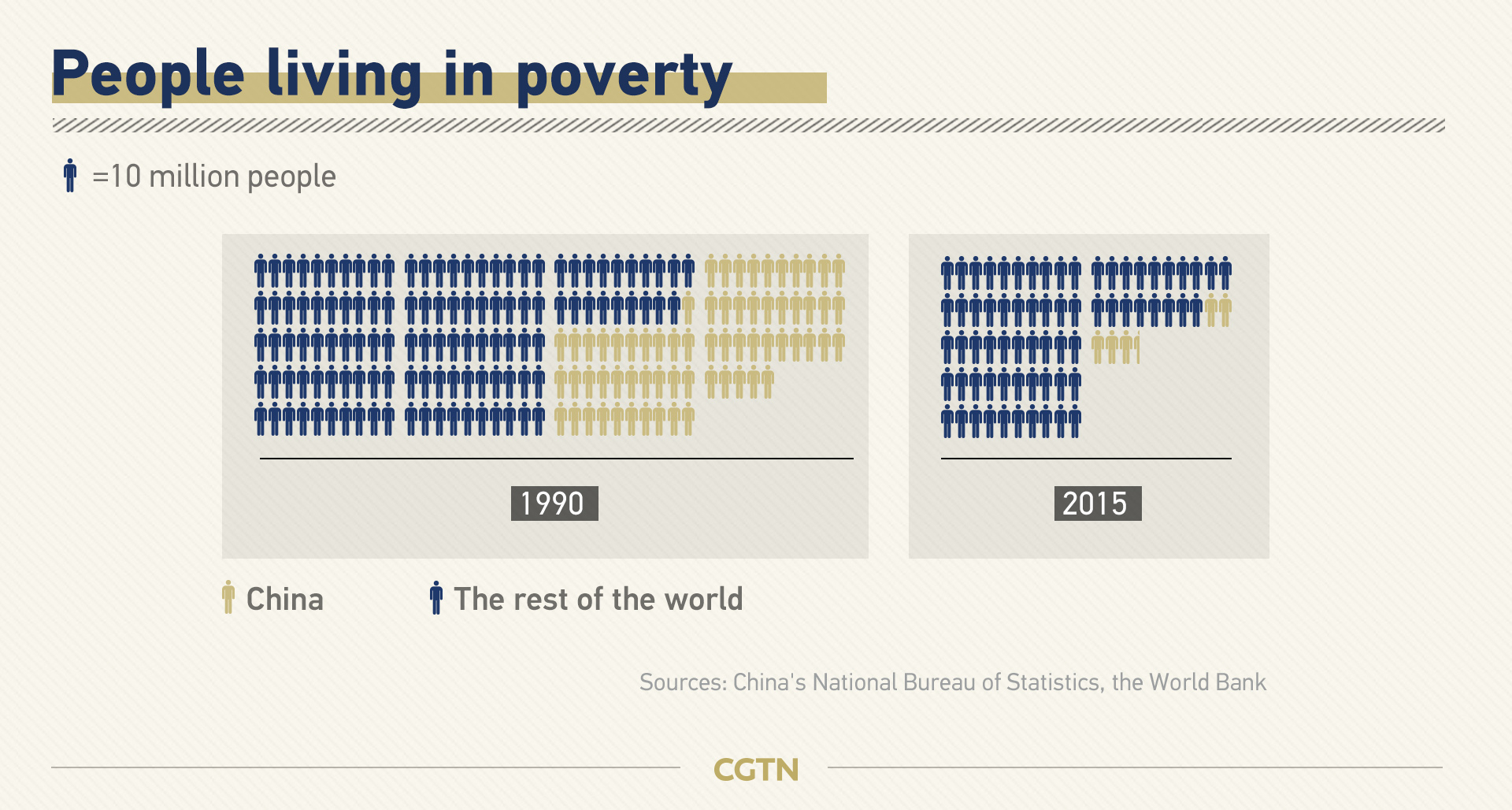 China has contributed more than any other country to global poverty reduction. In the past 40 years, China has pulled 754 million people out of poverty, even larger than the population of Europe, which was 741 million in 2016.

"Targeted poverty reduction strategies are the only way to reach those farthest behind and achieve the ambitious targets set out in the 2030 Agenda for Sustainable Development," United Nations Secretary-General Antonio Guterres said in a greeting letter to the 2017 Global Poverty Reduction and Development Forum. "China has lifted hundreds of millions of people out of poverty, and its experiences can provide valuable lessons to other developing countries."

While striving to reduce poverty at home, China has also been actively supporting the cause in other developing countries. As of October 2015, China had provided nearly 400 billion yuan in aid to 166 countries and international organizations, dispatched more than 600,000 aid personnel and provided medical assistance to 69 countries.

The development projects in connection with the Belt and Road Initiative, as well, are aimed to benefit more countries and their peoples in the form of international poverty reduction cooperation.