In The Spotlight: John Bercow, the unlikely Brexit star
By John Goodrich 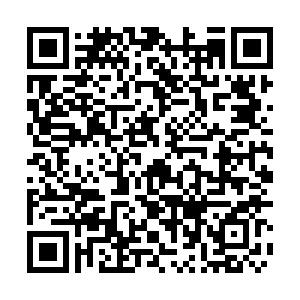 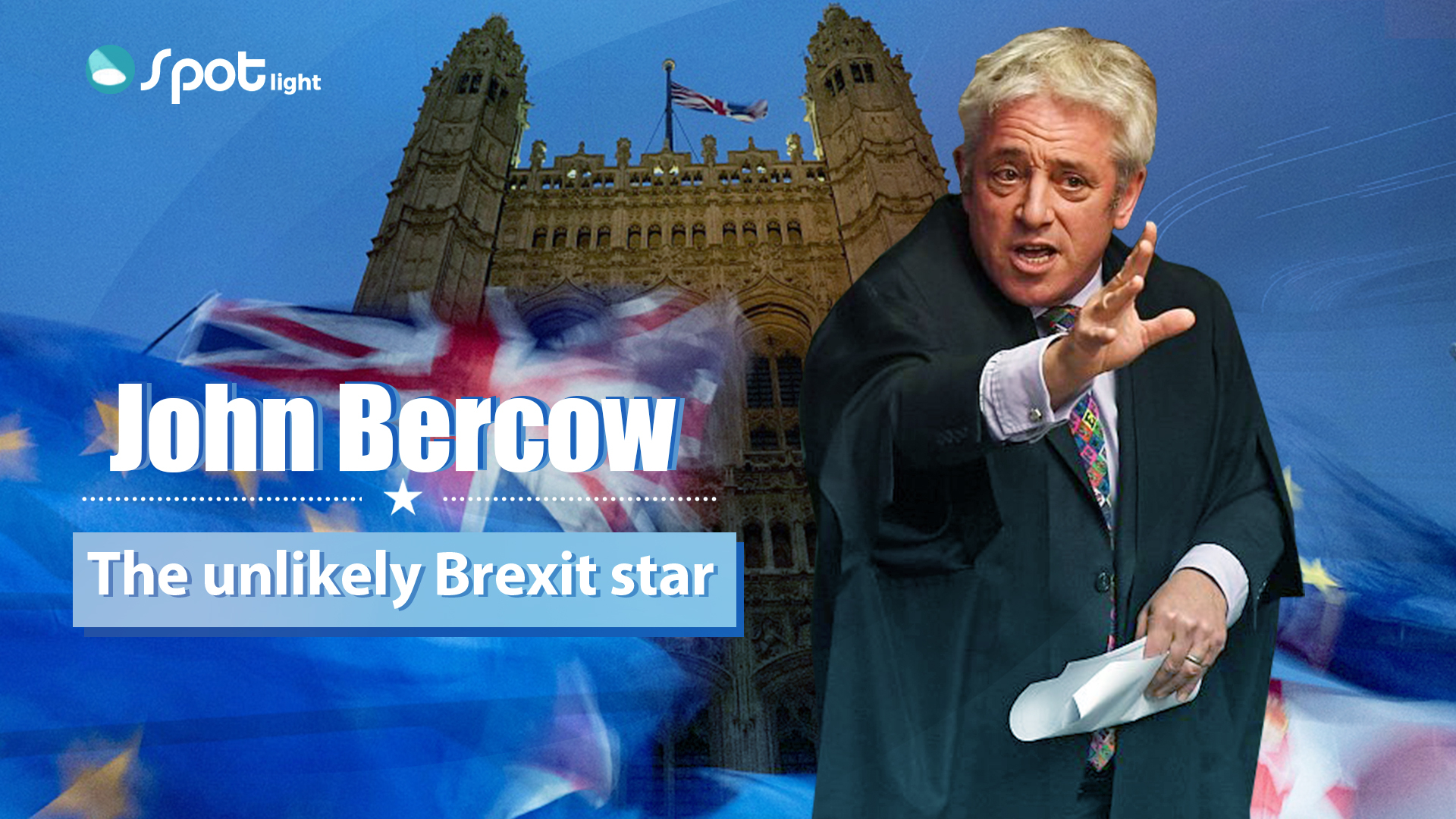 The spectacle has lasted over three years, floored two prime ministers, outlived multiple make-or-break moments – and will likely stretch on for years to come whether or not Britain leaves the EU in the coming days or months.

But John Bercow has reveled in the chaos.

The House of Commons Speaker, who is due to leave the parliamentary spotlight at the end of October, is the unlikely international star of Brexit. His cries 'Order! Order!' and caustic putdowns have spawned gifs, ringtones and memes as well as global curiosity. 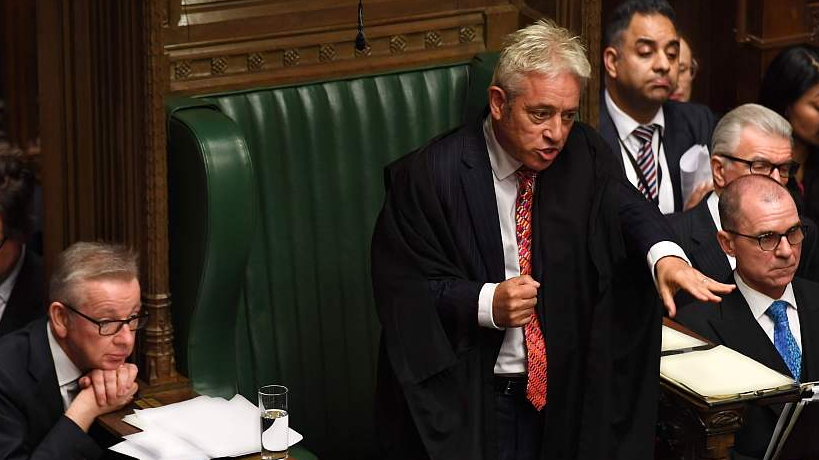 Speaker of the House John Bercow (C) gestures in the House of Commons in London, September 25, 2019. /VCG Photo

Speaker of the House John Bercow (C) gestures in the House of Commons in London, September 25, 2019. /VCG Photo

The 56-year-old has been accused of frustrating both Theresa May and Boris Johnson in their attempts to get Britain out of the EU, breaking precedent and infuriating hardline Conservatives along the way.

Bercow has been as polarizing to MPs as Brexit itself, but leaves the Speaker's chair on October 31 with the lucrative international speakers circuit beckoning. And as clock ticks towards his departure, he may yet have one last part to play in the Brexit drama.

The world looked very different to the young Bercow, son of a minicab driver in North London, who combined a love of tennis – he was a county champion and later the doubles partner of David Cameron, the former prime minister – with an absorption in politics. 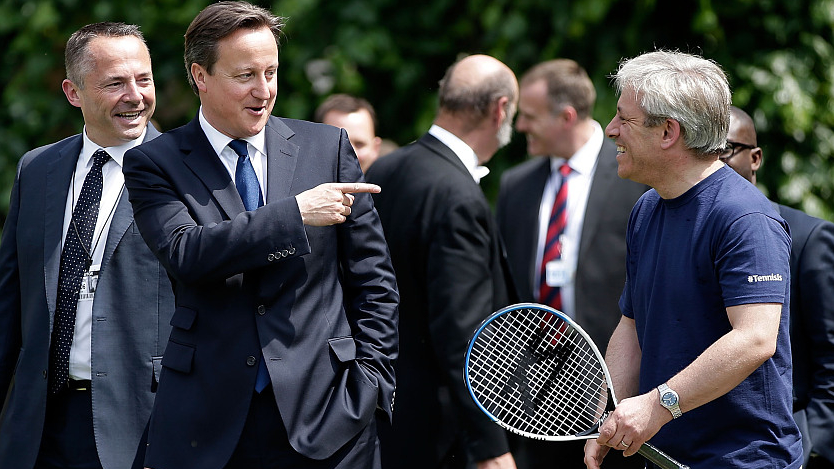 Then prime minister David Cameron laughs with the Speaker of the House John Bercow outside the Houses of Parliament, London, June 19, 2013. /VCG Photo

Then prime minister David Cameron laughs with the Speaker of the House John Bercow outside the Houses of Parliament, London, June 19, 2013. /VCG Photo

He was involved with controversial right-wing group the Monday Club and at university chaired the Federation of Conservative Students, an organization that was closed down in 1986 because of its radical positions.

At one point Bercow, grandson of a Romanian immigrant, supported "assisted repatriation" of immigrants, according to the New York Times, though he has since said his views then were "bone-headed."

Bercow entered the House of Commons in 1997 as the Conservative Member of Parliament for Buckingham, at an election in which his party was hammered by Tony Blair's New Labour after 18 years in power.

He developed into a social liberal, with many linking his softer views to his relationship with Sally Bercow, whom he married in 2002. She is an activist for the opposition Labour Party, and he was regularly rumored to be on the verge of defecting before his election as Speaker. 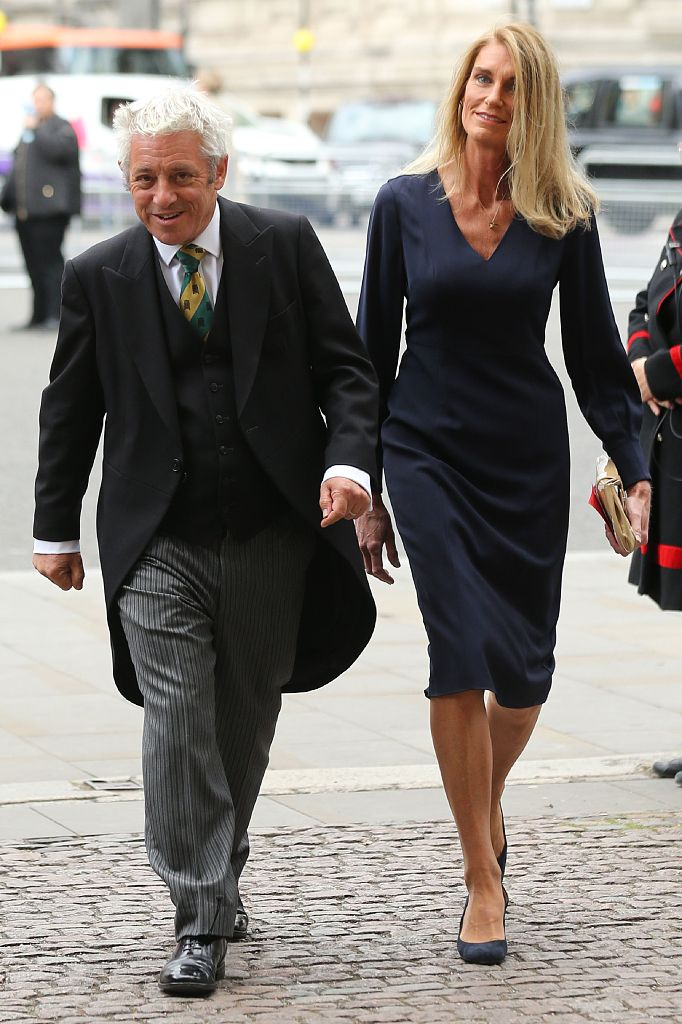 The marriage remains a source of tabloid fodder. Sally Bercow's decision to pose in just a bedsheet in front of parliament caused uproar, as did her claim that her husband had become a "sex symbol" since becoming Speaker, while her various appearances on TV reality shows irritated the political establishment.

Having made his name as an uncompromising right-winger, Bercow's views shifted markedly and a sense of betrayal is perhaps one of the reasons he is loathed by many Conservatives, though he has also seemed on a mission to wind up his former colleagues – who often hit back.

Cameron was criticized in 2010 after comparing Bercow to one of the seven dwarves (he is 1.62 meters tall) when recounting an encounter between the Speaker and Simon Burns, a government minister. "I'm not happy!" Bercow declared after the minister backed into his car. "Well, which one are you then?" Burns replied.

In the Speaker's chair

Bercow has been a thorn in the side of governments since his election as Speaker in 2009, positioning himself as a champion of backbench MPs whose voices had been muted by the presidential governing style – and big majorities – of the Blair governments.

Backed by strong Labour support but little from his own party, he was elected via a second ballot on a platform of reforming and modernizing parliament.

Bercow was a controversial figure from the start, ditching tradition to wear a regular suit – previous Speakers wore tights and robes – and regularly interrupting ministers and scolding MPs for rowdy behavior. 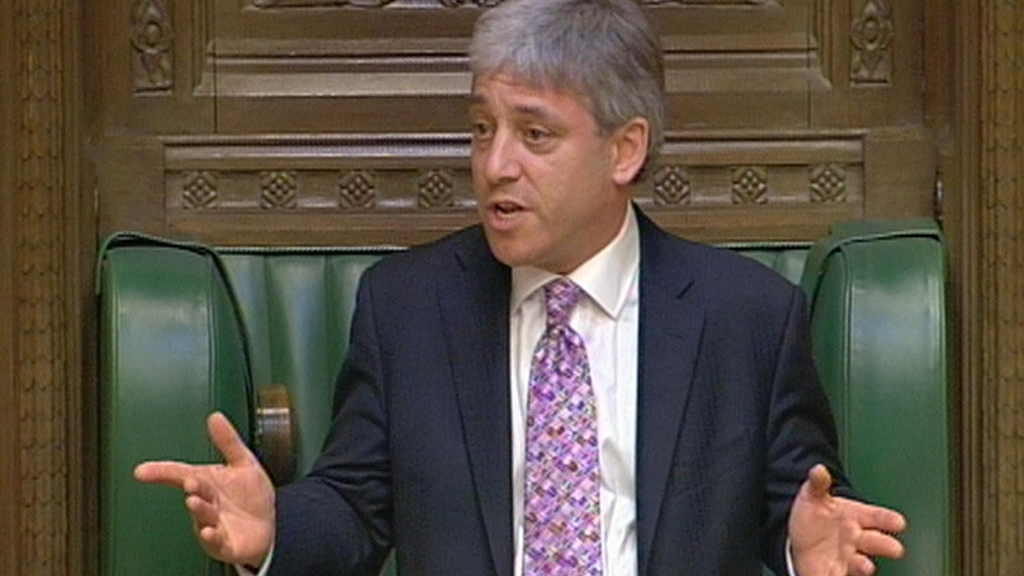 John Bercow after winning the ballot to become the new Speaker of the House of Commons, June 22, 2009. /VCG Photo

John Bercow after winning the ballot to become the new Speaker of the House of Commons, June 22, 2009. /VCG Photo

And his unusual speaking style and tendency towards antiquated language – regularly complaining about "chuntering from a sedentary position" – won few new friends.

"He could never say, 'It's great to see you'," a colleague told Bercow biographer Bobby Friedman, adding that the Speaker was more likely to say: "It gives me inestimable pleasure to meet you for the finest condiments created by Mrs. Twinings.'"

He is also said to have a fierce temper and has been accused of bullying, an allegation he denies.

Bercow's unusual manner and exclamations were known to prime minister's questions geeks, but he only came to wide international attention after the Brexit referendum.

Not only did memes fly, but Bercow was hugely influential in shaping the process. Brexit has shone a light on the power of the Speaker – and Bercow has been repeatedly accused of bias. 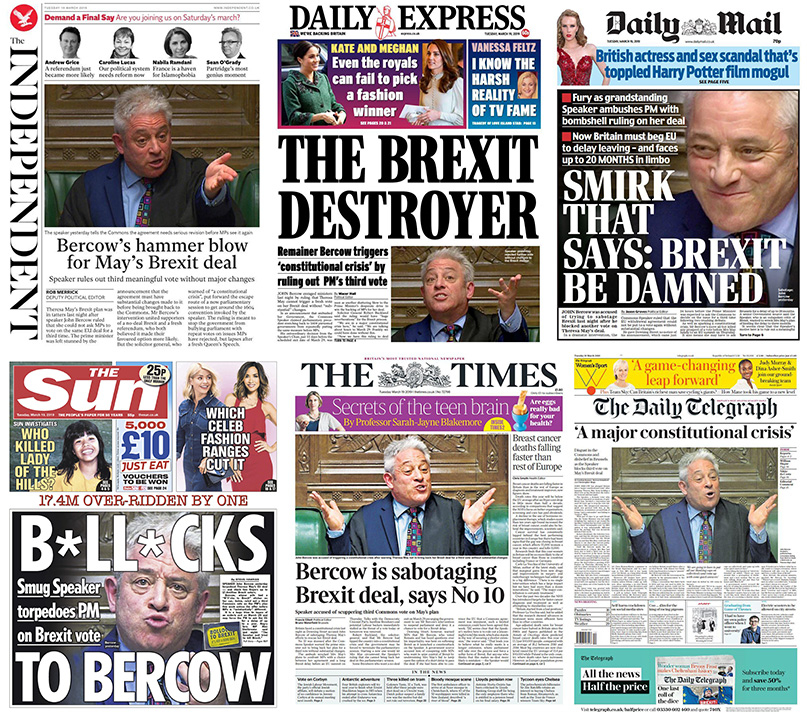 The right-wing Daily Mail newspaper derided him as an "egotistical preening popinjay who has shamelessly put his anti-Brexit bias before the national interest" on its front page after he broke with convention to allow a vote on an amendment which forced May to come up with a Brexit plan B in January.

On March 18, shortly before the initial Brexit deadline, he refused to allow the May government to bring its Brexit deal back to the Commons for a third vote because it was "substantially the same" as a previously rejected motion.

And on Monday he used the same argument to prevent Boris Johnson bringing his revised deal to a vote, and has been repeatedly accused of working with opposition MPs to thwart the government. 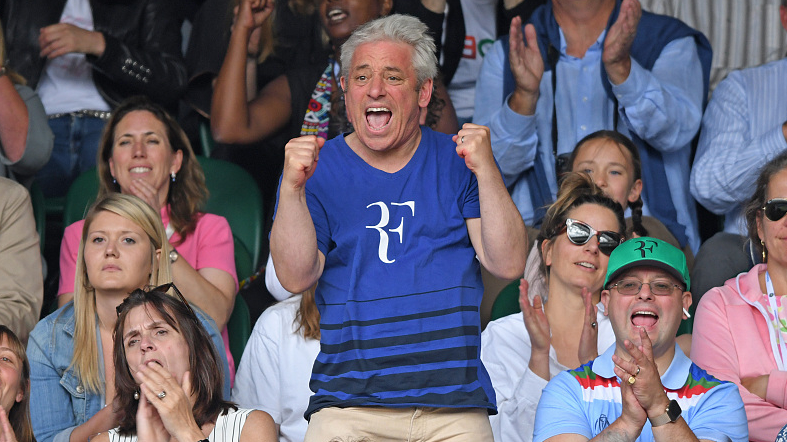 Speaker of the House John Bercow on Men's Finals Day of the Wimbledon Tennis Championships at the All England Club, London, July 14, 2019. /VCG Photo

Speaker of the House John Bercow on Men's Finals Day of the Wimbledon Tennis Championships at the All England Club, London, July 14, 2019. /VCG Photo

Bercow argues that while he did vote to remain in the EU in 2016, he is a neutral arbiter and is championing the rights of parliament against excesses of the government.

"I wouldn't say I'm a remainer enabler," he told CNN in early October. "I would say that I'm an enabler of all colleagues across the House who want to express their different points of view."

"If you are losing the match, it's quite bad form to blame the referee. I thought the Brexiteers were in favor of taking back control of parliament being in the driving seat? Well, they can't have it both ways."

Bercow's days in the Speaker's chair are numbered. He confirmed in September that he would stand down after a decade by October 31.

The Conservatives planned to stand a candidate against Bercow at the next general election – a break with convention – such was their annoyance with him, and may yet exact revenge by refusing him the seat in the House of Lords traditionally granted to a retiring Speaker.

He will almost certainly join the speakers circuit and the Roger Federer fanatic may be tempted to build on his 2014 book Tennis Maestros.

But there are still a few days left for Bercow to play another decisive role in parliament.

MPs are likely to reject Johnson's pitch for an election on Monday, but the prime minister is expected to try again. And given opposition MPs are reportedly planning to try to take control of the order paper, Bercow could yet again be in a position to influence the direction of Brexit.

Don't bet against him grabbing the spotlight one last time.