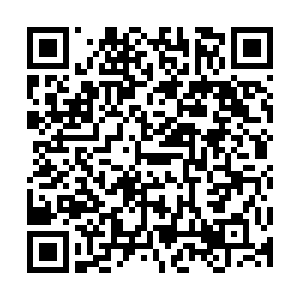 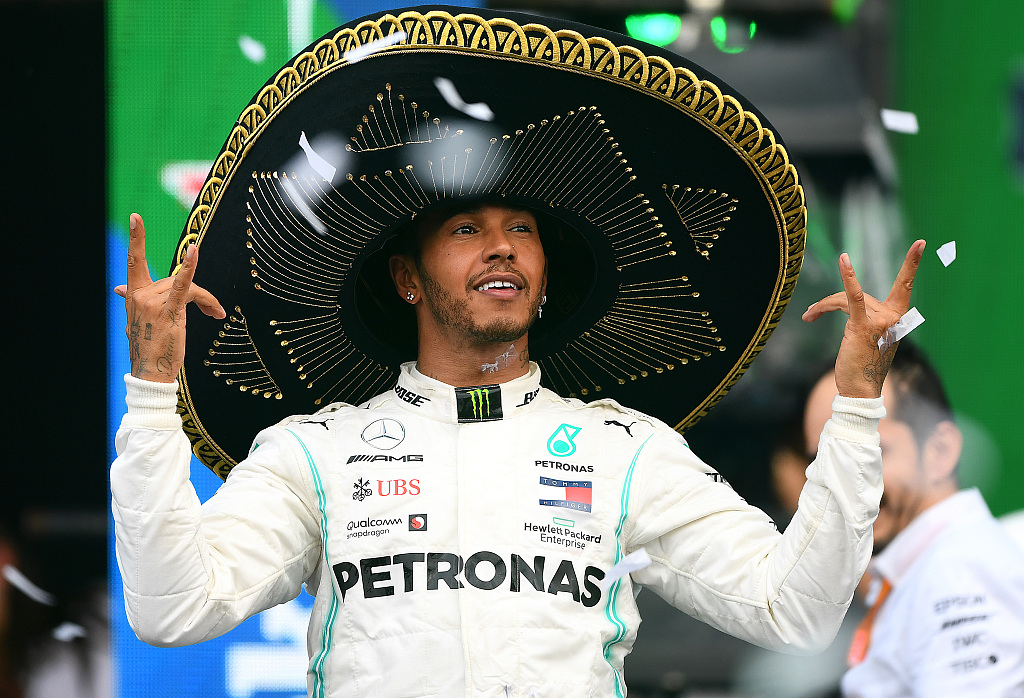 Lewis Hamilton drove to a near-flawless victory, but not yet a sixth drivers' world championship on Sunday when he claimed his 10th win of the season for Mercedes at the Mexican Grand Prix.

The defending five-time title-winner produced the measured drive of a champion-elect to claim a well-judged triumph ahead of Ferrari's Sebastian Vettel and his Mercedes teammate Valtteri Bottas who kept his own title bid alive for another week by finishing third.

Charles Leclerc, who started on pole position in the second Ferrari, finished fourth ahead of Red Bull's Alex Albon and Max Verstappen, who stormed through the field after an early pit stop, and local hero Sergio Perez of Racing Point.

Hamilton's victory was only his second since Formula One's European summer break in August, his second in Mexico and the 83rd of his career, but it was also Mercedes' 100th victory in F1 and extended his run points-scoring finishes to 30 races.

He now looks certain to clinch his sixth title at next weekend's United States Grand Prix in Austin, Texas, where he will need just four points.

"That was for Bono!" said Hamilton on his slow-down lap in reference to his absent race engineer Peter Bonnington.

"Today's an incredible result and I have to say thank you to our team. We came here on the back foot, but we pulled through."

After winning his last two titles in Mexico without even finishing on the podium, it was ironic for Hamilton to win but know he has to wait for a sixth coronation. 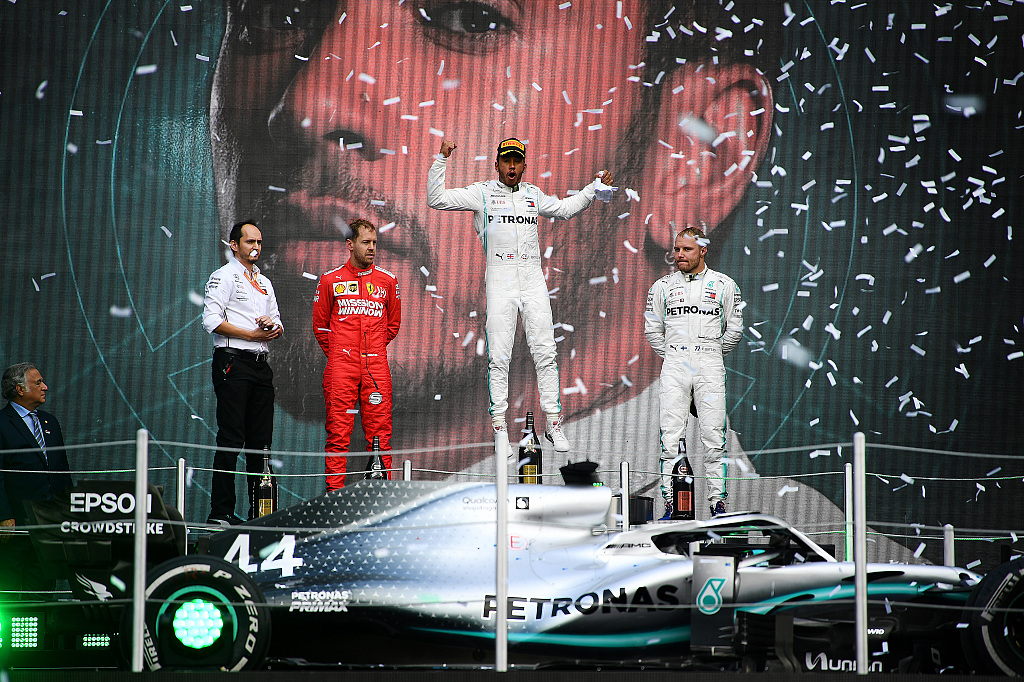 Bottas, who survived a heavy crash in qualifying on Saturday, said: "Considering what happened yesterday, it's a good result… I don't think we could have done much more."

Hamilton added: "I don't mind not winning the title here. I can wait. I just love racing and I am happy to take each race as it comes."

Four-time champion Vettel said: "It was a long race with no break, but I think Lewis was just cruising for most of his second stint. I'm happy, but we could have had a sharper strategy."

The race began in warm and dry conditions, Leclerc making a clean getaway from his seventh pole, ahead of Vettel, as Ferrari enjoyed their 65th front row lockout, gifted by Verstappen's qualifying penalty.

The Dutchman, angered by his Saturday demotion from pole for ignoring yellow flags when Bottas crashed, made an aggressive start and, as Hamilton recovered from being squeezed off-track by Vettel, banged wheels with him at Turn Two.

Both drivers had to regain control and, after another off-circuit excursion, re-joined down in fifth and eighth respectively. Their misfortune was a gain for Albon and Sainz who took third and fourth before Hamilton split them when he passed the Spaniard on lap four. 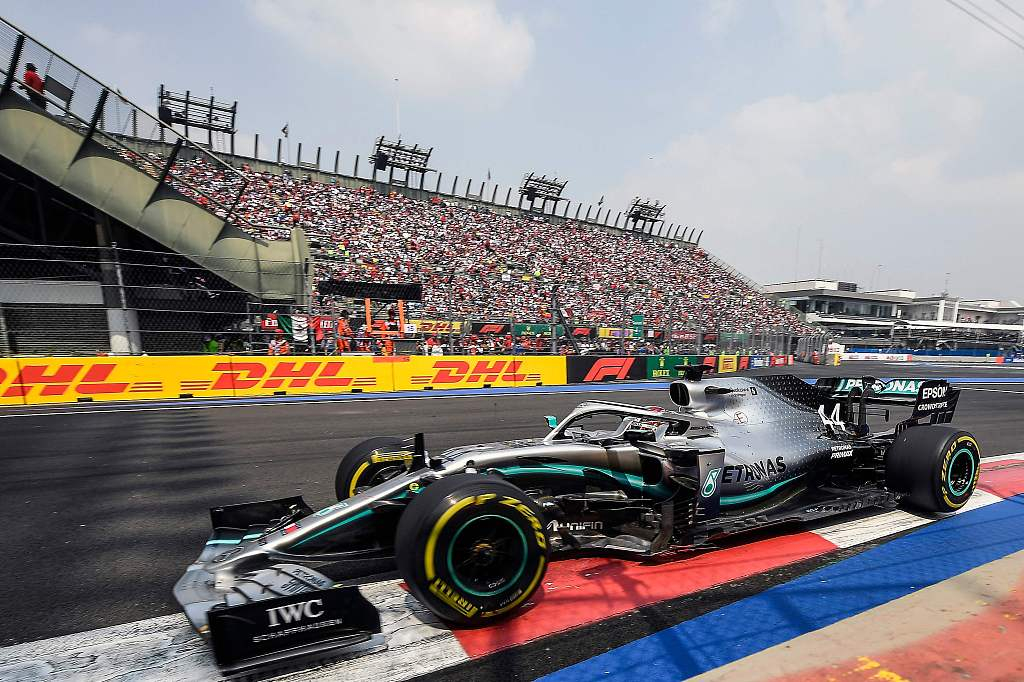 By then, the first Virtual Safety Car (VSC) intervention, to clear debris, had been completed to be followed by another burst of "mad Max" fury when he lunged into Bottas and picked up a puncture.

This led to his right rear tire falling off the wheel – and a pit-stop that left him to re-join 20th and last having switched from mediums to hards.

At the front, Leclerc pulled 2.3 seconds clear of Vettel by lap 15 before pitting, Ferrari responding to Red Bull's decision one lap earlier to bring in Albon for new mediums. The Monegasque, thus committed to a two-stop strategy, re-joined fourth, behind Vettel, Hamilton and Bottas.

In a flux of varying strategies, Hamilton fought rear tire-wear to stay close to Vettel, with Bottas 7.2 seconds adrift in third by lap 24 before the champion pitted for a set of hard compound tires.

Over 10 laps later Bottas pitted to be followed by Vettel, Leclerc regaining the lead ahead of Hamilton, but facing a second stop.

"My front tires are dead," complained Leclerc, shortly before a slow second stop on lap 44 in 6.2 seconds.

He came out fifth, rising to fourth when Albon pitted in 2.5 while Hamilton led the race, all the front-runners on hard tyres of varying ages as they approached the final laps.

Less than six seconds separated the top four with 14 laps to go with Vettel, Bottas and Leclerc in hot pursuit of Hamilton. A dramatic finish, governed by tire wear, was in prospect.