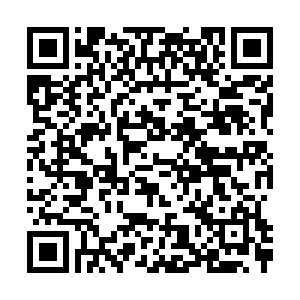 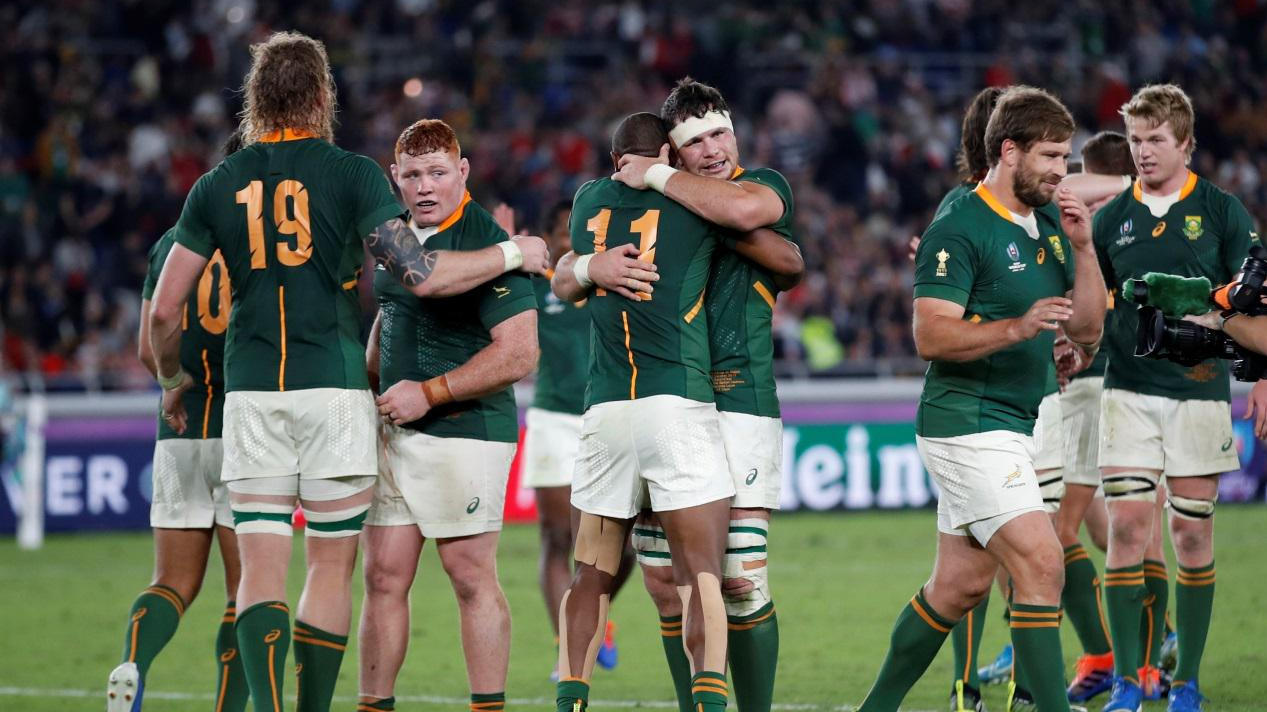 South African players celebrate after their win against Wales in the semifinal of the 2019 Rugby World Cup. /Reuters Photo

South African players celebrate after their win against Wales in the semifinal of the 2019 Rugby World Cup. /Reuters Photo

The stage is set for the biggest battle of world rugby as two-time former world champions South Africa will lock horns with 2003 winners England in the mouth-watering final of the World Cup in Yokohama on Saturday.

With England sending two-time defending champions Al Blacks out of the tournament in a pulverizing semifinal performance, all eyes will be on the high-voltage finale of a terrific World Cup. Even though the Springboks, who lifted the coveted silverware in 1995 and 2007, were outclassed by the All Blacks in their opening game of the tournament at the same venue, Rassie Erasmus' boys have gone from strength to strength and showcased a dogged display against fancied Wales in Sunday's second semifinal.

The marquee match between a high-flying side from the northern hemisphere and the indomitable ones from the south is set to establish a new world order. The stakes are high for the multiethnic England side, coached by an Australian who was born to a Japanese American mother, as they aim to emulate the Johnny Wilkinson-powered dream triumph of 2003. England's chief architects behind the derailment of the All Blacks juggernaut were Samoa-born Manu Tuilagi, who scored the morale-boosting first and only try against the ABs in the semifinal and Nigerian-origin lock Maro Itoje, who reigned supreme both in the air and on the ground to win the Player of the Match award hands down.

"I think we're just building. Game-by-game, week-by-week we're building. We're pushing in the right direction. We haven't done the job yet but we're one step closer," said the man, who has already got the moniker Super Maro.

The Boks, however, are always dangerous when they are at a sniffing distance from the Webb Ellis Trophy. "Physically they stepped it up to a new level so we're going to have to stop them... I think it's two sides that really pride themselves on a good kicking game as well. So, it's going to be a good chess match," said fly-half Handre Pollard, whose impeccable scoring prowess with the boot earned his side a hard-fought win against the Six Nations champions in the semifinal. 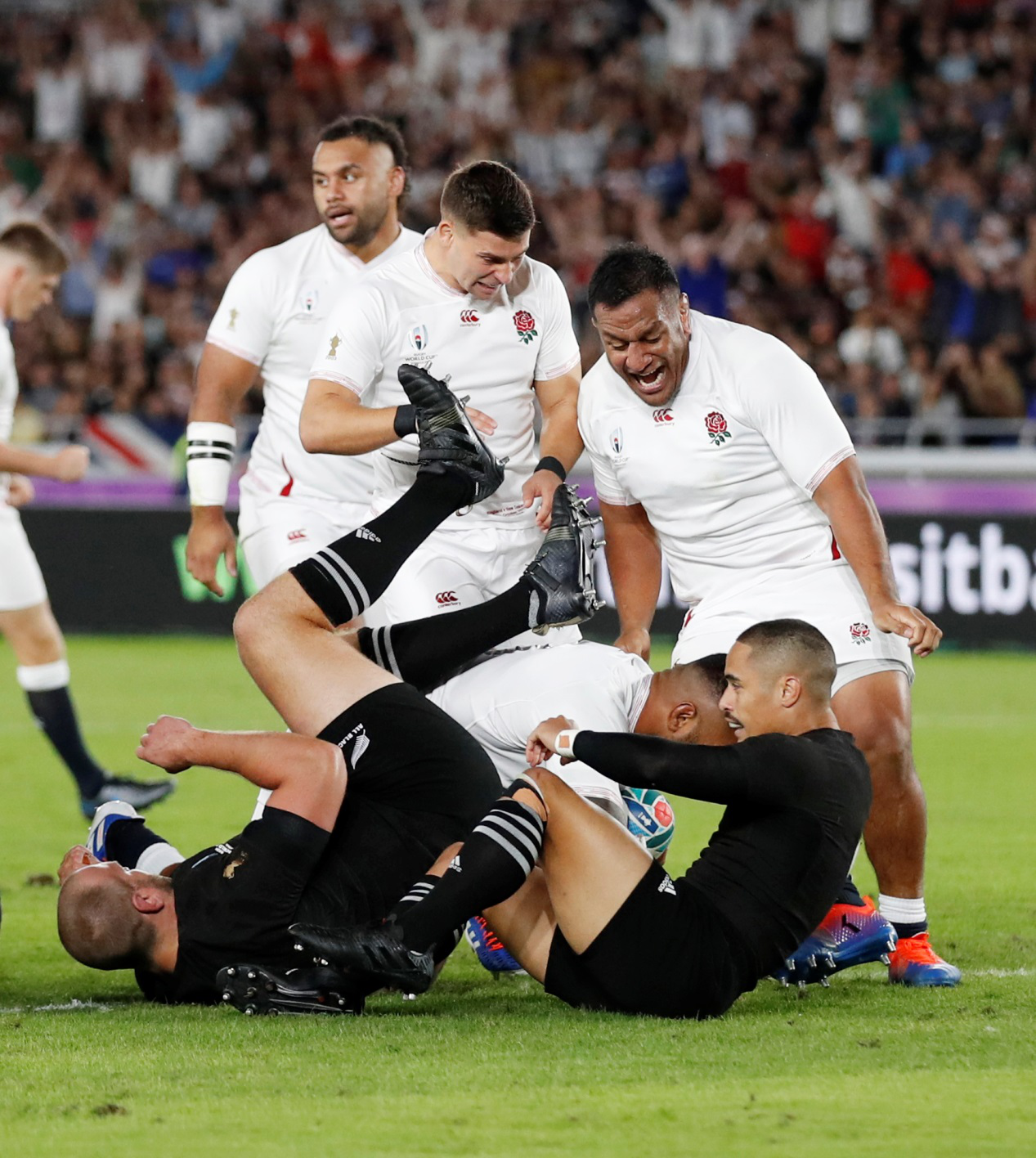 Sending a stern message to his tough opposition players, who overpowered the big, bold ABs in an energy-sapping and intensely physical game, Pollard warned, "Grinding it out is something we believe in. That's what it takes to win playoff games and World Cups.”

Meanwhile, having been hit by Willi Heinz's hamstring injury, the Three Lions have called up scrum-half Ben Spencer as an emergency cover before the final.

British Prime Minister Boris Johnson took time out to send his best wishes for the English side, who are into the final for the first time since 2007. "Immense effort by @EnglandRugby, many congratulations to the whole team. Now for the final! #ENGvNZL #RWC19," Johnson tweeted.

Johnson's cheer for England was followed by tongue-in-cheek banter from South African President Cyril Ramaphosa as he wrote on Twitter, "See you on Saturday BoJo @BorisJohnson when you will be watching Siya, the team and I hoist high Webb Ellis Cup. A STERLING showing once again by the @Springboks. Our national teams have just been doing amazingly on the international stage. #WALvRSA #RWC2019 #StrongerTogether.”

It's going to be a contest between the tactical acumen of Eddie Jones and the pragmatic yet stubborn attitude of his counterpart Erasmus. The mind games have already begun and the bugle for the big battle has already been sounded. Come Saturday and the International Stadium in Yokohama will see a new champion.