In The Spotlight: Abu Bakr al-Baghdadi, incarnation of ISIL?
By Wang Yan 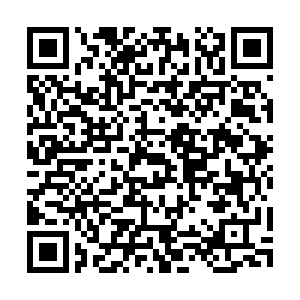 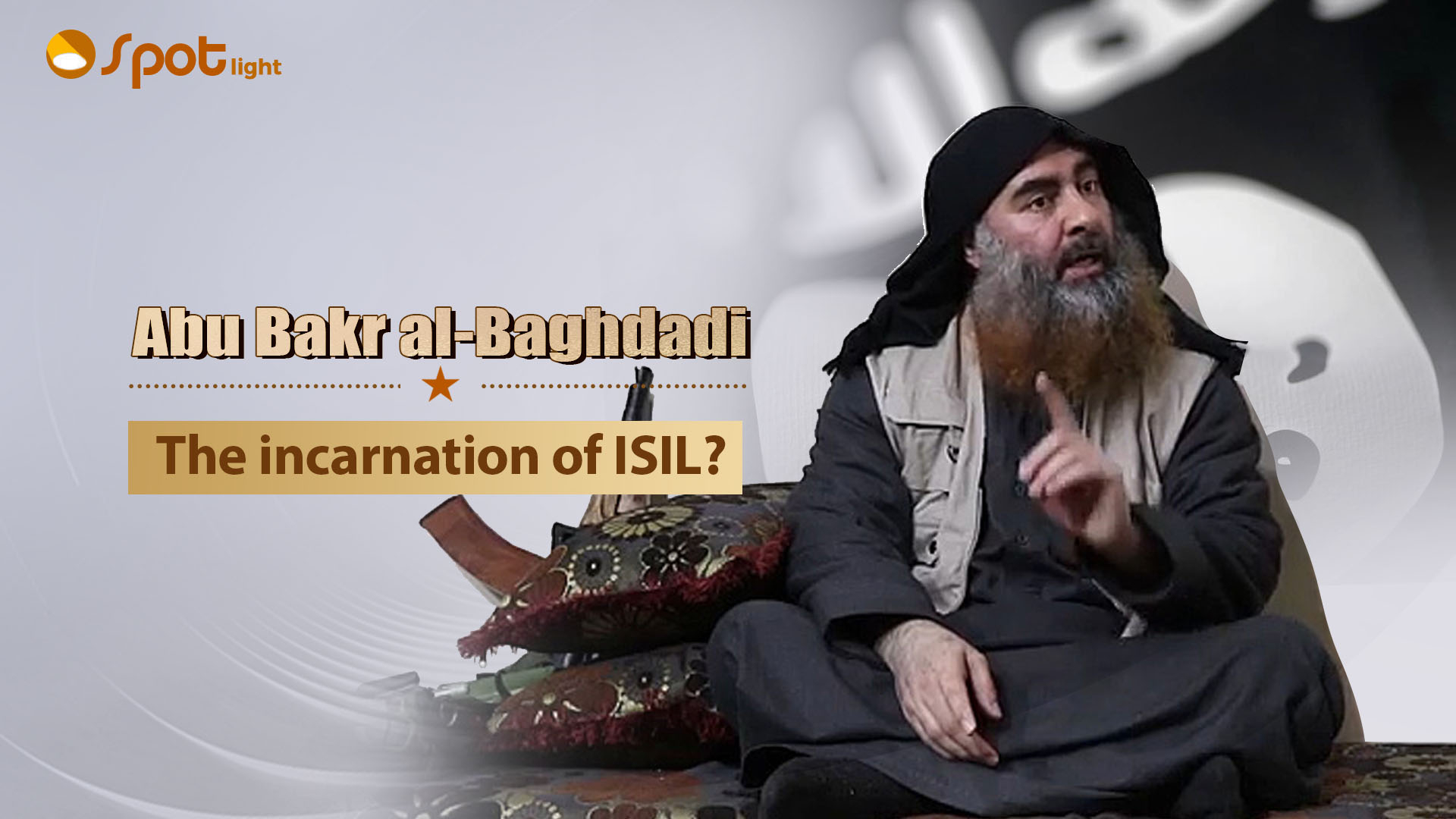 Abu Bakr al-Baghdadi, the notorious leader of Islamic State of Iraq and the Levant (ISIL) and the world's most wanted man, killed himself during a raid by U.S. commandos in northwestern Syria on Saturday. A week after U.S. President Donald Trump broke the news to the world in a televised address from the White House, ISIL officially acknowledged his death and announced Abu Ibrahim al-Hashimi al-Qurayshi as its next chief.

Little do we know about this new face, except his most-likely-pseudo name, and his alleged experience in combating the U.S. forces, a look at Baghdadi's profile could give out some clues and lessons for future counter-terrorism maneuvers against ISIL and beyond.

Born as Ibrahim Awad Ibrahim Ali al-Badri, Baghdadi grew up in an average conservative Sunni family with five sons and several daughters in a desolate plain in the village of Al-Jallam in central Iraq.

Al-Jallam is populated with members of al-Badri tribe, which traces its lineage to the Quraysh people of the Arabian Peninsula - the tribe of the Prophet Muhammad. Sunni scholars believe it as the key qualification for becoming a "caliph."

Ibrahim started his mediocre student life in a nearby city, Samarra. His high school transcript obtained by The New York Times shows that his highest grade was in the art (95 out of 100), while in core subjects like algebra, he mustered scores in the low 50s.

In the interviews conducted by The New York Times with 17 people who knew Ibrahim, including friends, classmates, neighbors, and teachers, he was described as "shy," "reserved," "isolated" and "quiet."

However, he managed to emerge as a talented Koranic learner in a Sunni mosque in Baghdad's northwestern Tobchi district. He is believed to have embraced Salafism and jihadism during this time.

"Yes, he had a spiritual gift," said the owner of the Ahmed Ibn Hanbal mosque, Khalid Ahmed Ismael, adding, "his soul was connected to the mosque."

Based on the biography published by his supporters online, he gained bachelor's and master's degrees in Islamic studies before embarking on a Ph.D. at the Islamic University of Baghdad. 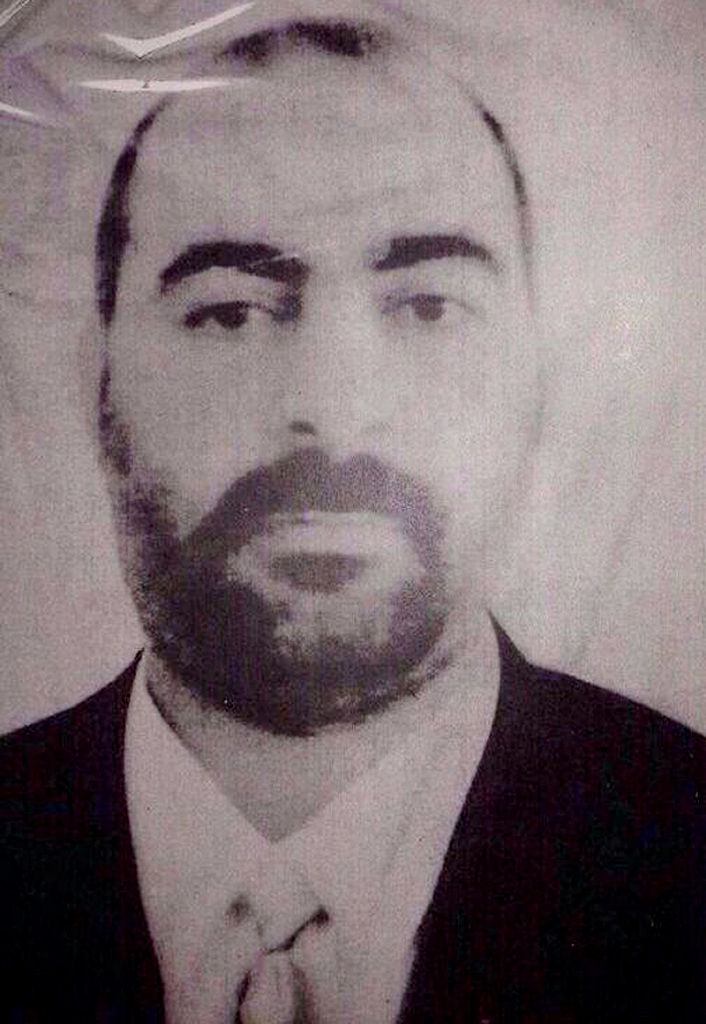 A handout picture released by the Iraqi Ministry of Interior in 2014 shows a photograph purportedly of Abu Bakr al-Baghdadi. /VCG Photo

A handout picture released by the Iraqi Ministry of Interior in 2014 shows a photograph purportedly of Abu Bakr al-Baghdadi. /VCG Photo

One of the most important turning points on Ibrahim's radicalization journey occurred in 2004 when he was raided at his brother-in-law's residence near Falluja, who had taken up arms against the American occupation.

After he was captured as "a hanger-on" of that operation, he was incarcerated in a detention center at Camp Bucca for 11 months. Baghdadi reportedly led prayers, delivered sermons and taught religious classes while in detention, and was often asked to mediate in disputes by the prison's U.S. administrator.

Qardash and many other future al Qaeda and ISIL militants first met Baghdadi and were influenced by his radicalization during this period, earning the prison the status of the birthplace of ISIL.

Head with a price tag

The world first heard about the name of Abu Bakr al-Baghdadi in July 2004, as the "Caliph Ibrahim" (head of all Muslims), leaving the shadows for the first time in a Friday sermon in Mosul, Iraq. 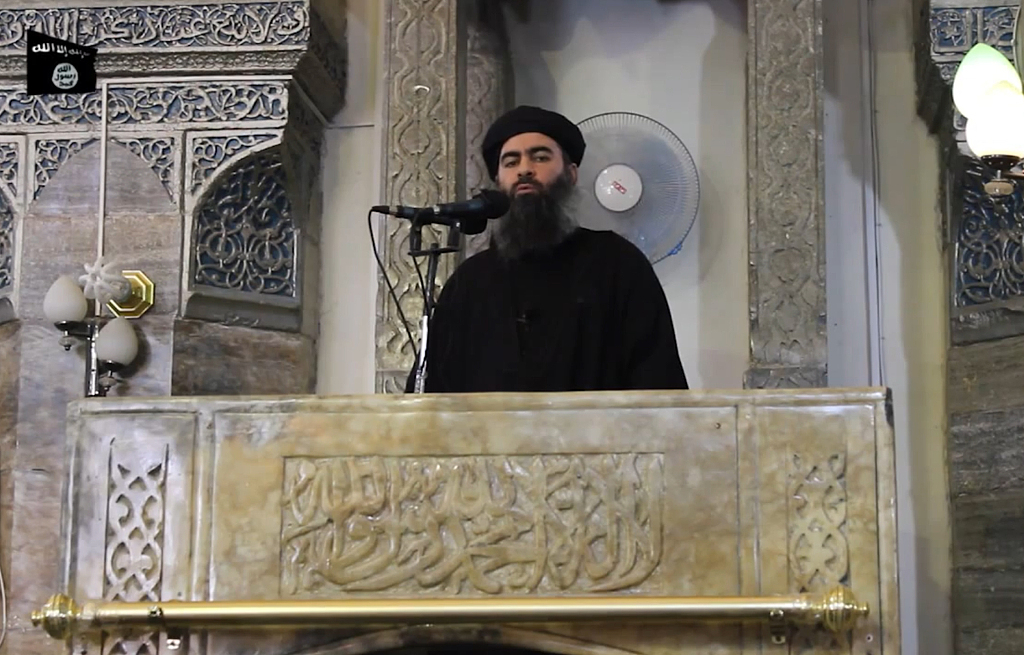 One way to measure the "performance" of a terror CEO is by the bounty on his head. By this measure, Baghdadi was a success with a 25-million-U.S.-dollar price tag on his head, compared to his predecessor, Abu Ayyub al-Masri, the United States offered only 100,000 U.S. dollars for information leading to his location in 2008.

During its peak time, ISIL once controlled an area roughly the size of Great Britain, including large swaths of territory in central and eastern Syria, killed or enslaved thousands of members of the local Yazidi religious group. In this "idealized future Muslim state," the self-appointed "Caliph" imposed a brutal rule on almost eight million people.

Baghdadi transformed a flagging insurgency into a global terrorist network and attracted foreign fighters from over 100 countries with an overly romanticized purpose.

Famously known as "media jihadist," ISIL under Baghdadi's leadership was savvy with social media platforms, and responsible for encouraging brutality and lethality by carrying out public executions and crucifixions.

In this fashion, Baghdadi inspired attacks like shooting at an office party in San Bernardino, California; Christmas market attack in Germany; truck attack in Nice, France, on Bastille Day; suicide bombings at churches on Easter Sunday in Sri Lanka.

After Baghdadi's death, everyone has jump into the party to claim the credit for the success of this decapitation mission, but the road has been traveled before when al Qaeda chief Osama Bin Laden was killed in 2011. 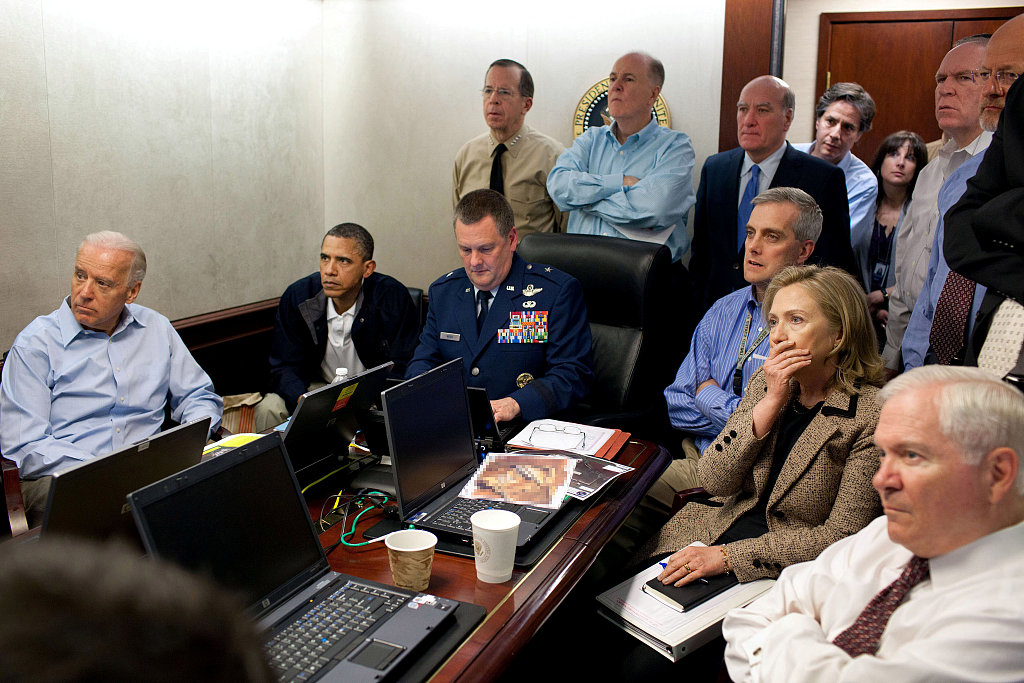 Then U.S. President Barack Obama (2nd L) and Vice President Joe Biden (L), along with members of the national security team, receive an update on the mission against Osama Bin Laden in the Situation Room of the White House, in Washington, U.S., May 1, 2011. /VCG Photo

Then U.S. President Barack Obama (2nd L) and Vice President Joe Biden (L), along with members of the national security team, receive an update on the mission against Osama Bin Laden in the Situation Room of the White House, in Washington, U.S., May 1, 2011. /VCG Photo

In Trump's remarks about Baghdadi's killing, he boasted that it was more important than Bin Laden's had been. But the most distinction between Baghdadi and Laden, is the latter shares equal, if not excessive, fame as the group they started. But Baghdadi's penchant for operating in the shadows made him less an incarnation of the group he led.

After Baghdadi was widely believed to have given up operational control of the group years ago, his effect became more diffuse, with the utilitarian cynicism to a loosely affiliated network of global supporters. As a result, his impact on terrorism committed by jihadi groups or inspired by jihadi propaganda will remain a potent threat for a long time.

The name implies the new leader is also a descendant of the Quraysh tribe of the Prophet Muhammad, besides that the Western intelligence community is scrambling for information for the new "Caliph."

However, it is too early to know how many of the "jihadists" who once pledged allegiance to Baghdadi will extend their loyalty to his successor. It is also unclear how this symbolic event will play out in terms of the terror group's operations, strategies, tactics, priorities and structure. 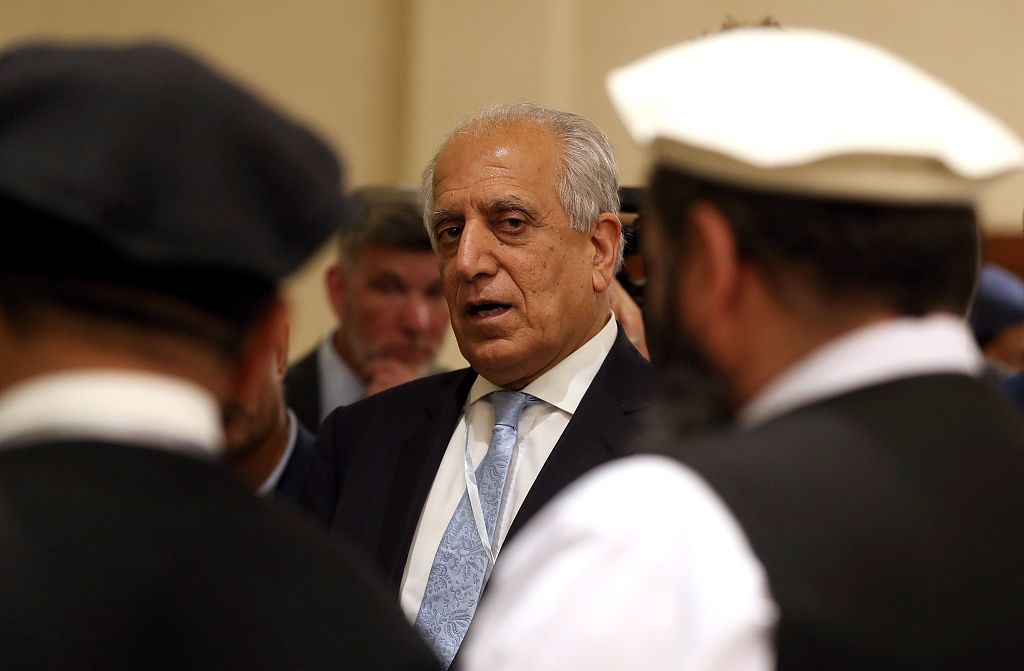 One thing unquestionable is that it is impossible to eradicate terrorism through military force. Feasible alternatives are still under examination, as the United States' peace talks with Afghan Taliban have been on and off for years.

The territories of ISIL are scattered in both Syria and Iraq. The current dynamics call into question about the power struggles within ISIL and the acceptance of the legitimacy of Hashemi as the franchise's leader. Beyond that, the divisions between different sub-groups to the global Salafi-jihadi movement with various leaderships are no secret at all.

But the global attacks under the umbrella of global Salafi-jihadist movement have been uprising throughout the year. With no intention to legitimize any of the extremist groups, maybe it is acceptable to talk over the differences at the cost of time and patience rather than fear and blood.

If there is only one lesson learned from Baghdadi's profile is that decapitation is not the end of the road. Presently, tens of thousands of devout ISIL followers are held in detention camps in northeast Syria. Some of them are waiting to "reinstate the caliphate." Some see this period of "hardship" as simply a test from God of their commitment to the cause. Some of them might be the future leaders of an insurgency, ready to legitimize killings for another hateful, supremacist and intolerant ideology.

So much we would like to believe Trump's address, that "the world is now a much safer place" without Baghdadi, but his toxic legacy lingers on feeding on resentments, poverty, sectarianism, and wars.