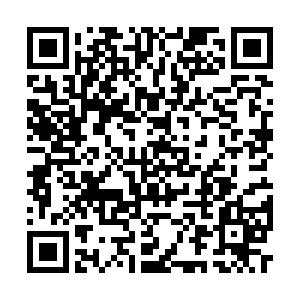 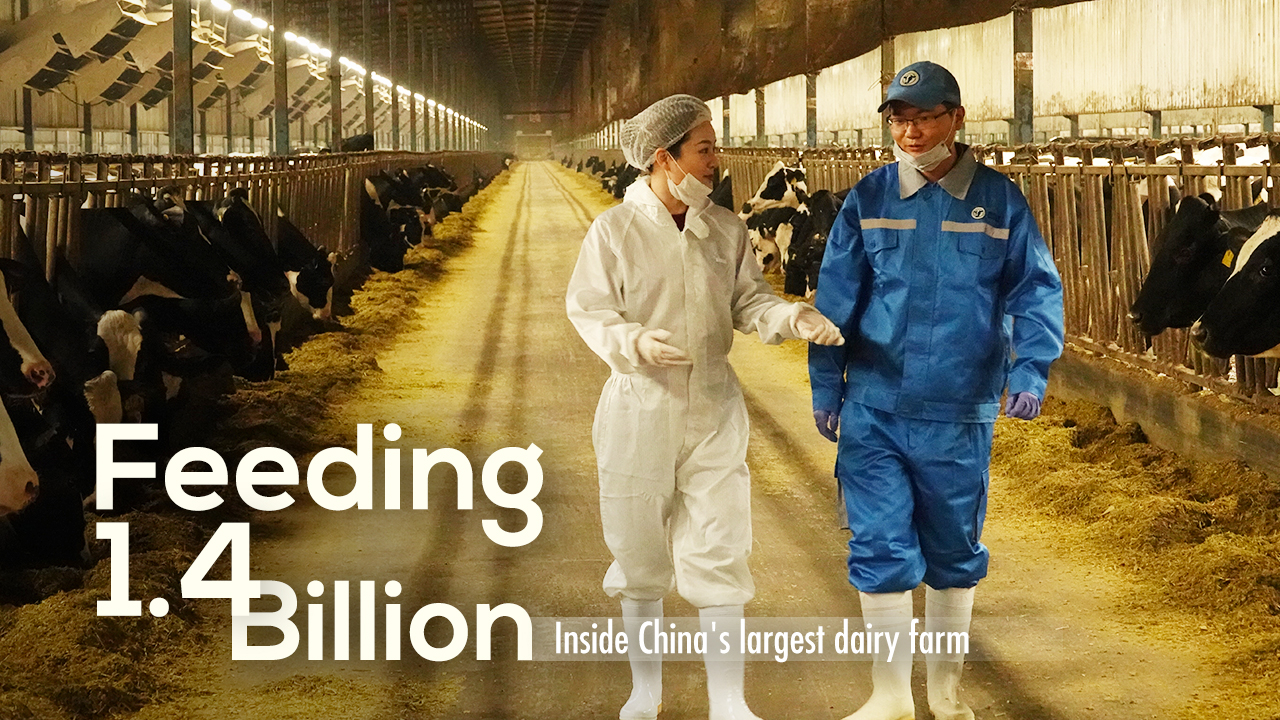 Milk, as one of the oldest natural drinks, is rich in nutrients like calcium, vitamins, protein and amino acids humans need.

According to the China Dairy Data Report released by the Dairy Association of China, from 1949 to 2018, China's total raw milk production increased from 220,000 tons to 31.77 million tons – a 145-fold increase. Milk and dairy product consumption quadrupled among urban residents from 1995 to 2010 and nearly increased sixfold among rural ones, making the country the fastest-growing market in milk consumption.

At the end of October in Bengbu, east China's Anhui Province, about 100,000 mu (6,667 hectares) of alfalfa await the last harvest this year. Known as the king of pastures, alfalfa is rich in nutrients and is good for feeding animals. 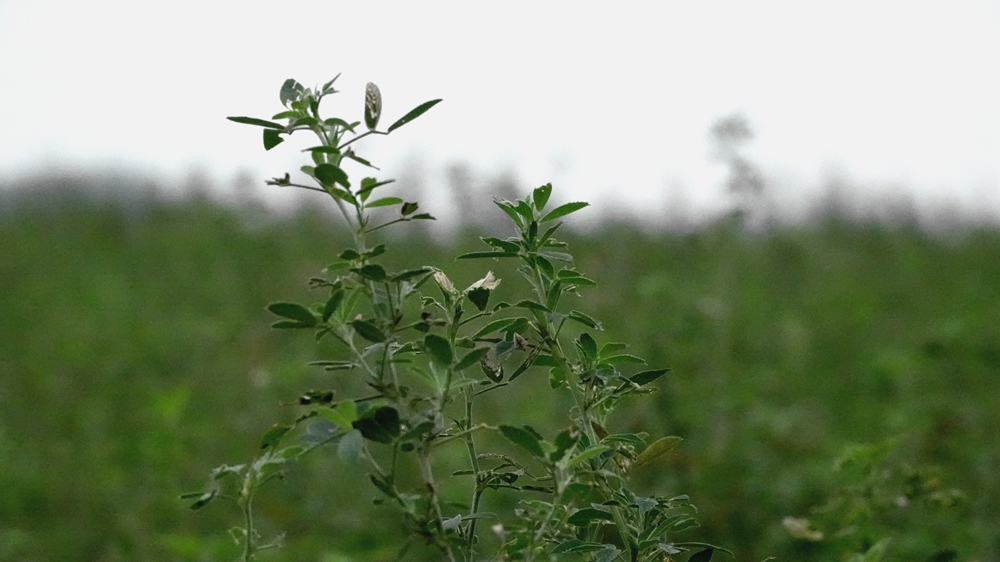 Alfalfa, one of the best pastures for animals. /CGTN Photo

Alfalfa, one of the best pastures for animals. /CGTN Photo

Some five kilometers away sits Modern Farming's Bengbu Farm. It is a huge modern ranch and the largest raw milk producer in China. Nearly 600 acres, the farm has eight lactating cow barns to hold 2,880 milking cows each. Other barns and sheds hold calves and pregnant cows, putting the farm's maximum bovine population at 38,000. The freshly harvested alfalfa will  be delivered here and processed into feed for the cows. 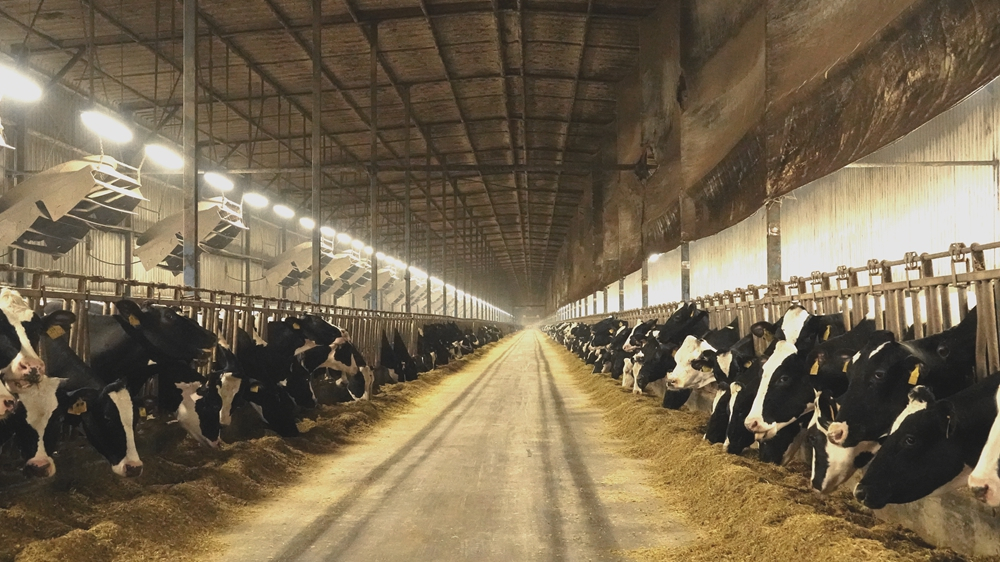 One of the lactating cow barns at Modern Farming's Bengbu Farm. /CGTN Photo

One of the lactating cow barns at Modern Farming's Bengbu Farm. /CGTN Photo

The biggest guarantee of milk production is high-quality feed, and a comfortable living environment is no less important.

Unlike traditional household-based dairy farms, industrial agriculture's allure is the sheer scale of it. China has pushed the industry to modernize in recent years, as milk factories no longer purchase from individual farmers' sheds. Instead, they run large-scale pastures and raise their own cows. The cows at Modern Farming's farm are raised in different sheds according to their ages, and their feed and living habits are carefully watched by the breeders, making sure to create a comfortable environment for the cows before they go to work. 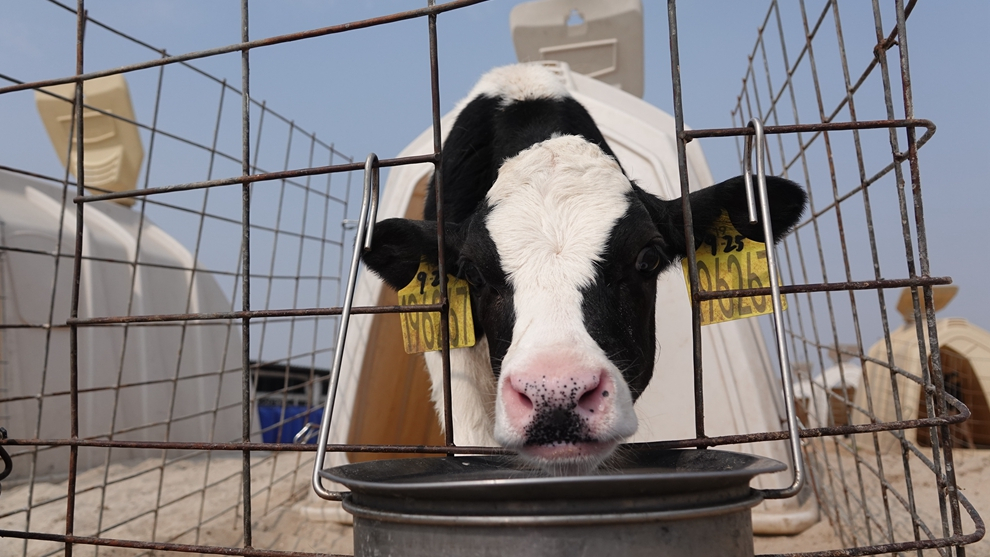 In the milk collection hall, with the sound of peaceful music, there are eight large rotary milking machines, which are the cow's work table.

"We play music at the collection hall just to pacify the cows and make sure they will be milked comfortably," said Xing Jianting, the manager of milking operation at Modern Farming.

Each of the machines can hold 80 cows and thus 640 cows working at the same time. More than 20,000 lactating cows are milked three times a day at Modern Farming's farm, with an output of 650 tons of fresh milk daily, which is equivalent to the daily milk supply of 20 million people in Beijing. 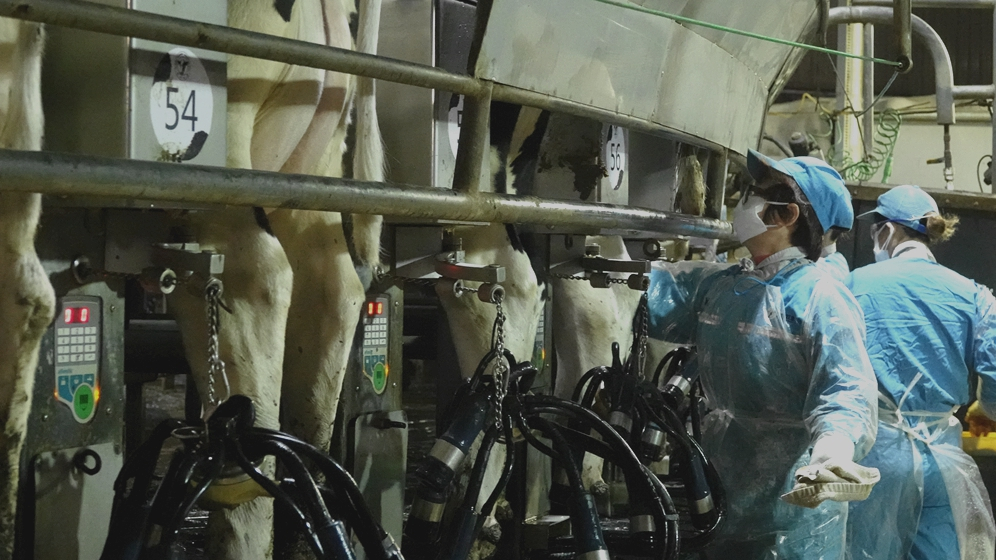 "The fresh milk is direct to the processing line through the full-close delivery pipeline for automatic filling, which takes less than two hours from the milk collection to the packaging," the program engineer Liu Zhenhui told CGTN. "This is a huge improvement in milk production."

The completely enclosed transportation reduces the possibility of bacteria breeding and also maintains maximum nutritional value. Industrial dairies make traceability and accountability for quality possible, and this is something consumers want. 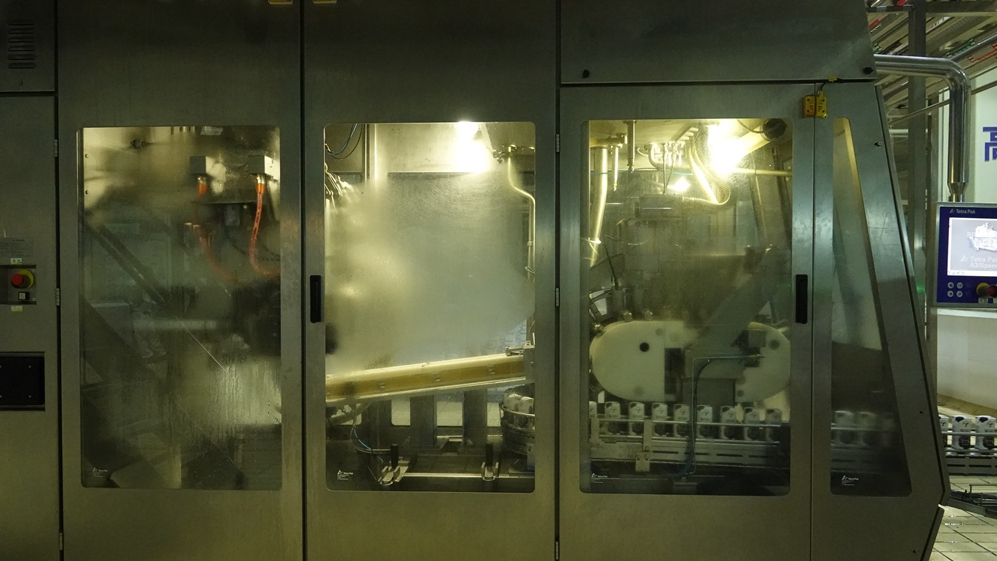 With the improvement of living standards, China's demand for dairy products is continually growing, and more and more attention is being paid to the safety of dairy products. Every year, as many as 100,000 heifers from Australia and New Zealand are shipped across the ocean to this dairy farm to satisfy the country's growing taste for milk products. 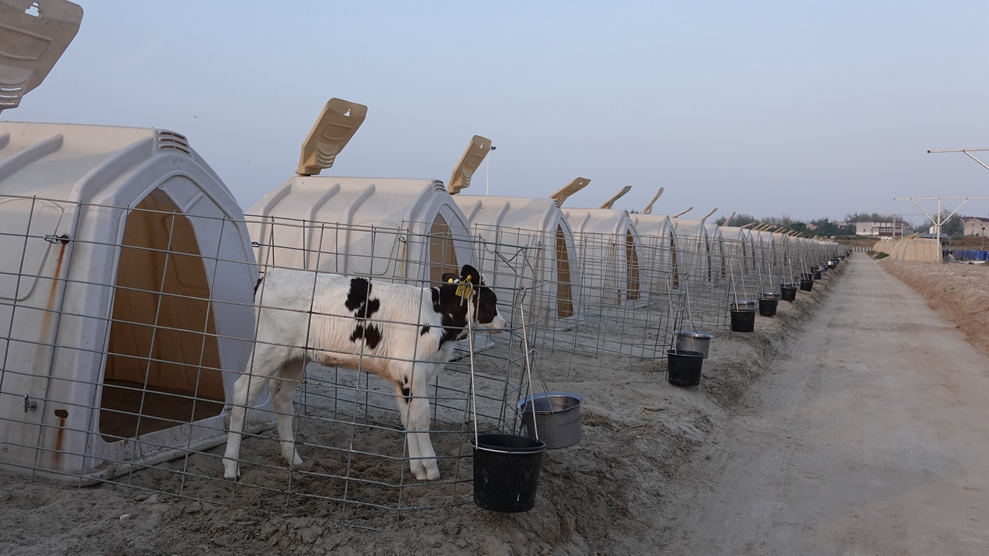 Industrial dairy farms like Modern Farming would grow rapidly in China; its integrated model of planting, breeding and processing ensures the safety and quality of milk. To feed 1.4 billion people, what is more important than a cup of good milk?