Data tells: Why should BRICS countries cooperate on energy?
By Pan Zhaoyi 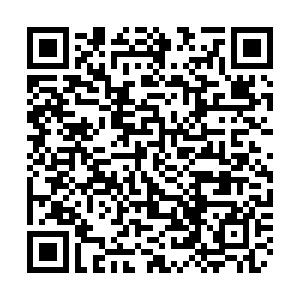 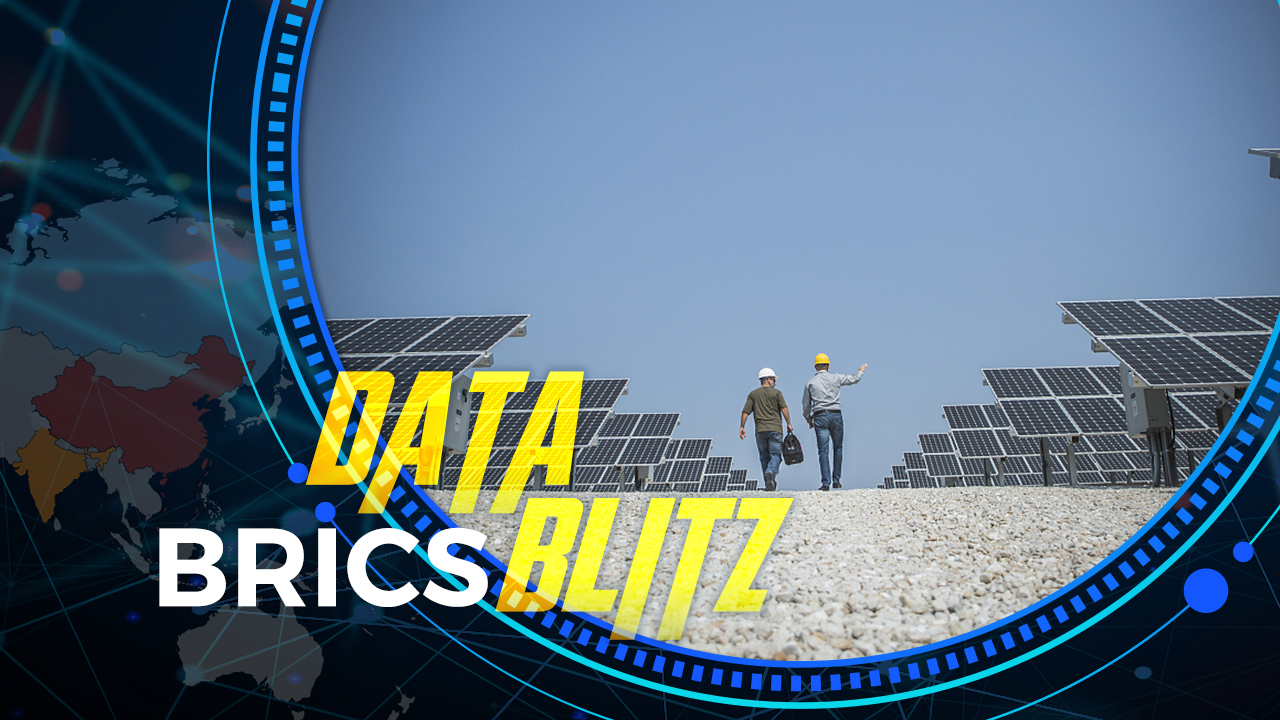 It's been a decade since BRICS countries, the world's largest emerging market represented by Brazil, Russia, India, China, and South Africa, first talked about "energy security" at the 2009 BRICS Summit. Referring to the uninterrupted availability of energy sources at an affordable price, energy security is vital for the socio-economic growth of every country around the world.

Why should BRICS countries collaborate?

According to the International Energy Agency (IEA), BRICS countries account for 36.4 percent primary energy supply and this is set to rise to 40–50 percent by 2040. Compared to the Organization for Economic Cooperation and Development (OECD) countries, an intergovernmental group consisting of 36 world-leading economies, BRICS has seen an 11.6 percent increase from 2000 to 2017. 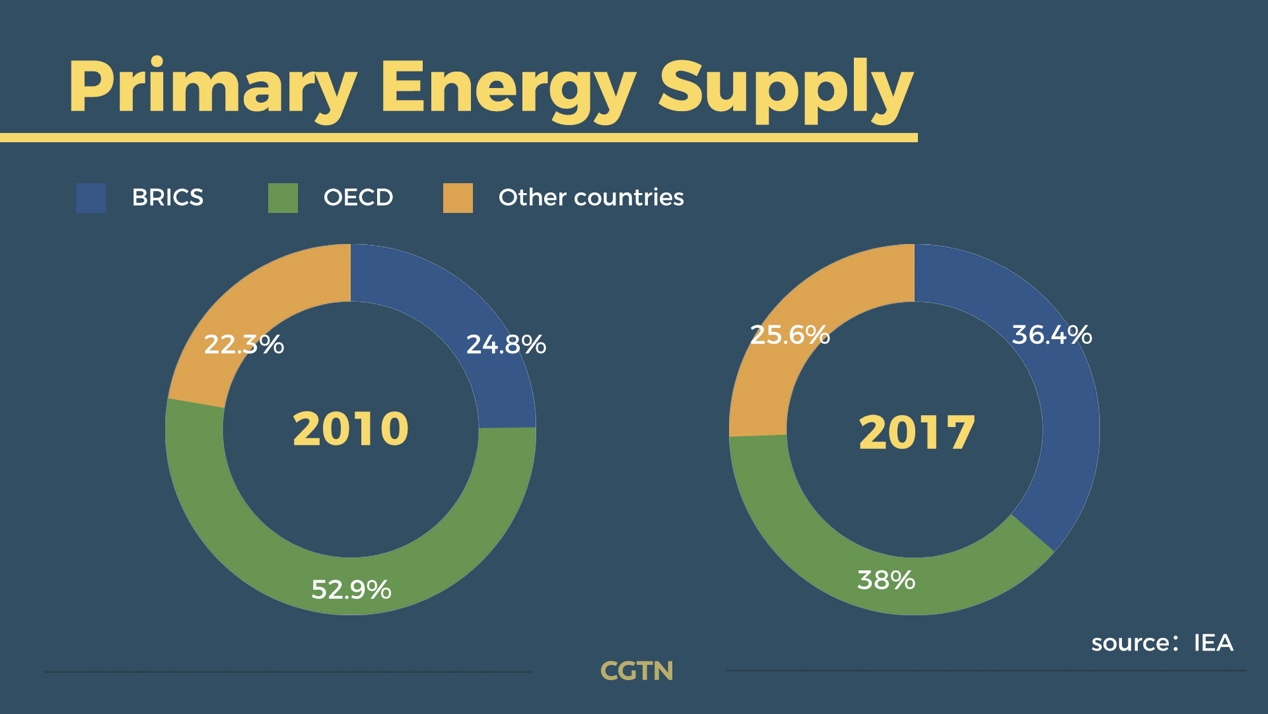 In terms of renewable energy, the installed capacity of the emerging market increased by about 161 percent in the past decade, accounting for 43.1 percent of the world total, according to the Renewable Energy Statistics 2019 published by International Renewable Energy Agency (IREA). However, some more interesting facts emerged as we took a closer look at these figures. 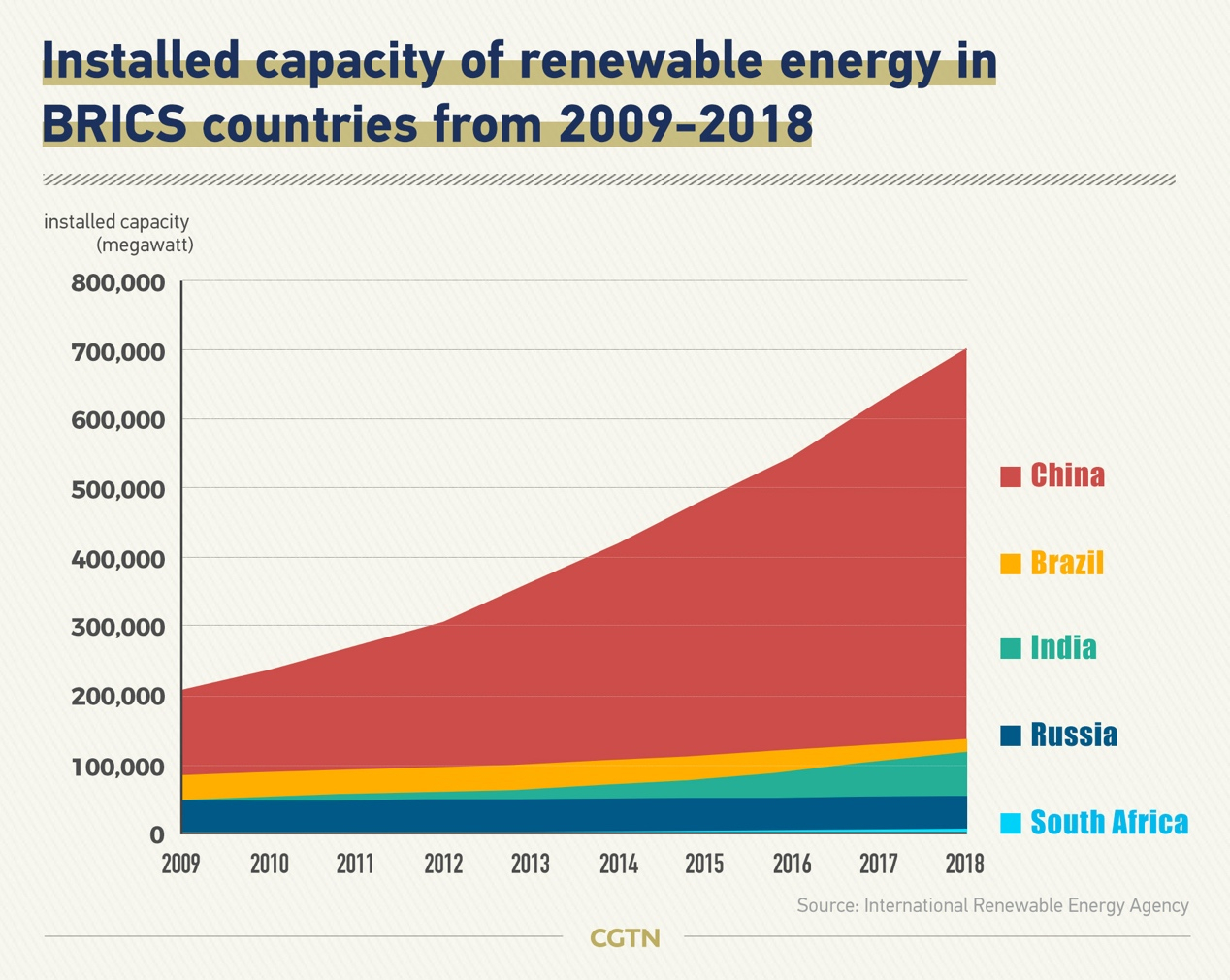 BRICS countries include both the largest and fastest-growing energy producers and consumers in the world. Russia and Brazil rely heavily on their primary energy exports, with Russia boasting the world's largest natural gas production, while China and India are among the world's top importers of oil, natural gas, and coal. 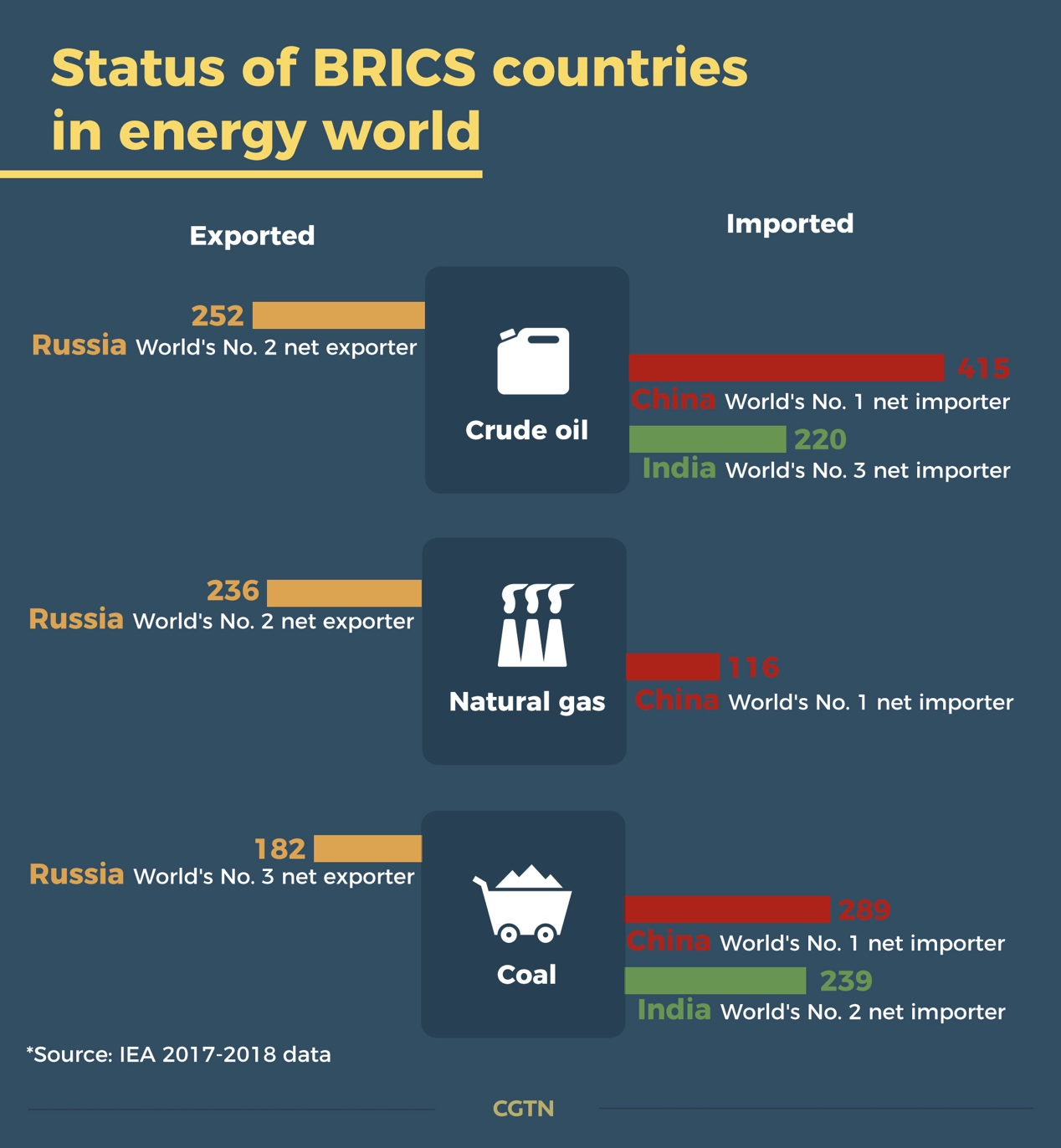 Even in the green energy sector, BRICS cannot be overlooked. China is the largest clean energy market in the world, replacing fossil fuels with renewable energy at a fast pace. In 2017, the country invested 126.6 billion U.S. dollars, accounting for 45 percent of the global investment in green energy, according to a United Nations (UN) report published in 2018.

"Not only is China the world's largest producer of solar panels and wind turbines, but it has also been the top investor in clean energy in the last ten years. China should continue to push forward with the energy transformation in its 14th five-year plan, as doing so is critical for capping carbon emissions before 2030," Zhang Kai, project manager of Greenpeace East Asia Climate and Energy, told CGTN. 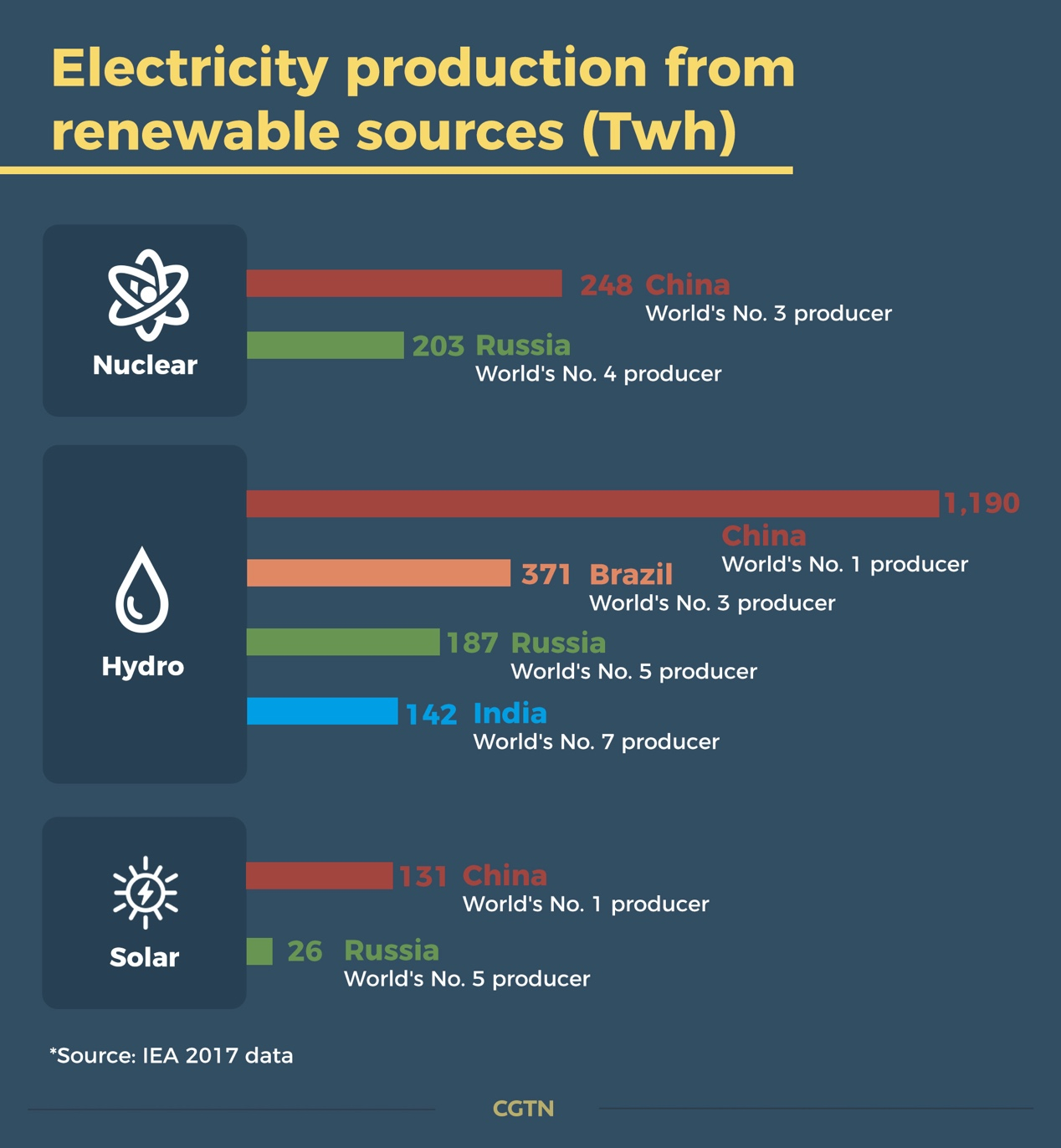 "Big Three," China, Brazil, and India accounted for more than half of the global investment in renewables, committing 177 billion U.S. dollars to the green energy sector, the report said.

South Africa, as the richest country on the African continent, is also the pioneer in terms of clean energy transformation. A United Nations Environment Program (UNEP) survey indicates that Africa could be one of the most promising markets for renewable energy in the next decade due to its abundant solar, wind, biomass and other resources.

The above-mentioned facts and figures undeniably prove that BRICS countries could be perfect partners, with complementary energy strategies benefiting every member of the group. In the past 10 years, the five member-countries have managed to do that by actively promoting cooperation on bilateral as well as multilateral basis. 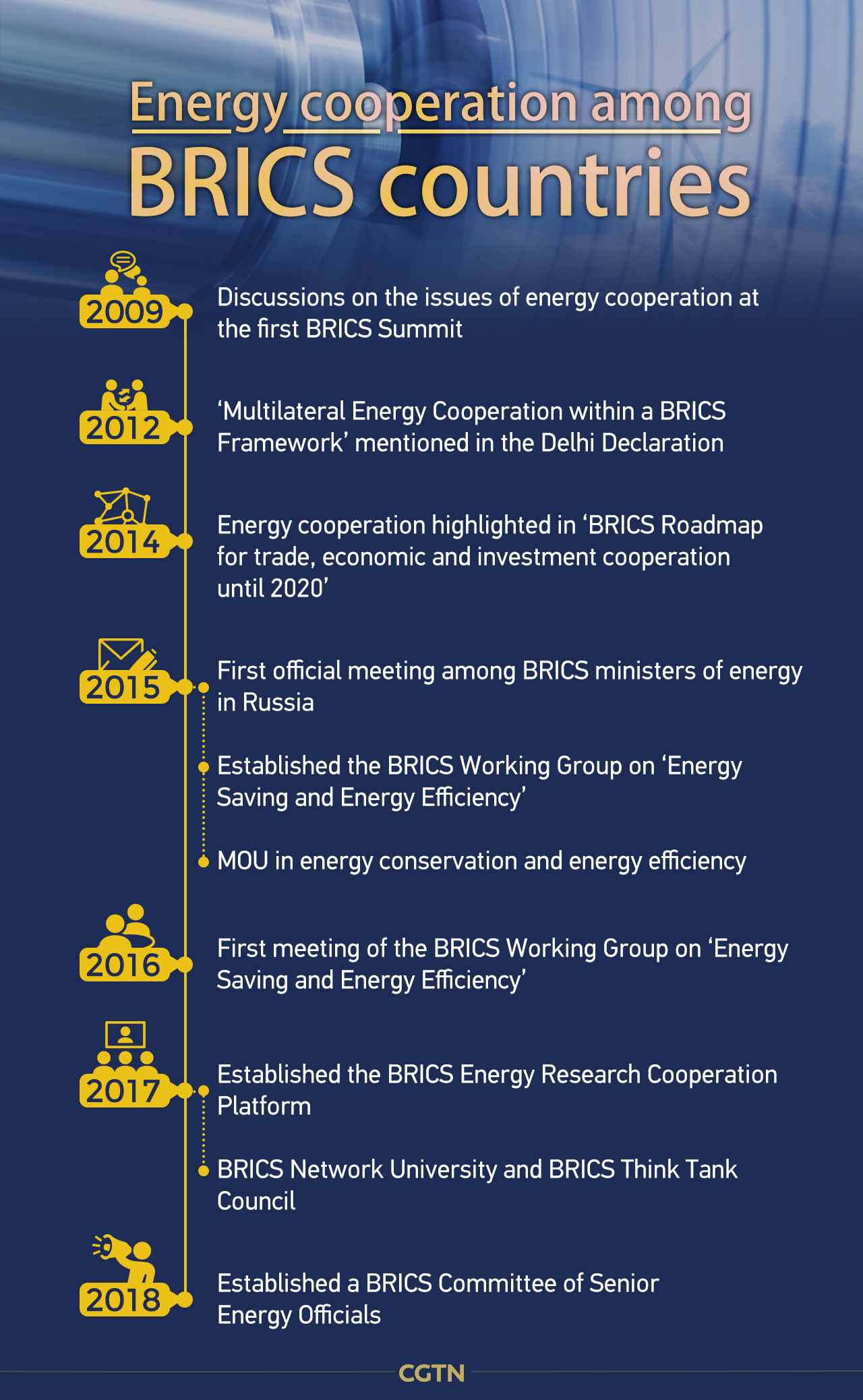 An IRENA report published at the ninth general assembly in Abu Dhabi in January suggested that the rapid growth of renewable energy sources and the demise of fossil fuels are causing major changes in global politics.

"The shift will alter the global distribution of power, relations between states, the risk of conflict, and the social, economic and environmental drivers of geopolitical instability," the report noted. By taking advantage of renewable energy sources and technologies, the cooperation among countries forming the world's largest emerging market group is expected to flourish further in the years to come.