Graphics: The evolution of China's fighter jets over past 70 years
By Hu Yiwei 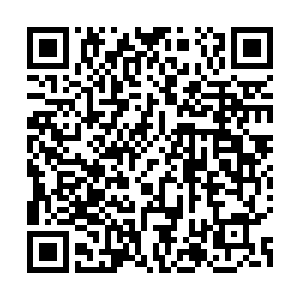 China marked the 70th anniversary of the founding of the People's Liberation Army (PLA) Air Force on Monday, November 11.

On October 1, 1949, just 17 aircraft flew over the Tian'anmen Square during the military parade in Beijing for the founding of the People's Republic of China (PRC). And all those planes had been captured from enemies in previous battles. To better impress the people on the ground and deceive the enemy, nine of the plane even flew over twice.

Last month, when the PRC marked its 70th founding anniversary, more than 160 aircraft flew overhead in a military parade at the very same site, including the most advanced J-20 stealth fighters.

Seven decades on the Chinese air force has achieved remarkable progress in terms of upgrading its weaponry and equipment, especially fighter jets.

China's first-ever home-made subsonic fighter jet J-5 made its maiden test flight on July 19, 1956. It was a milestone in the country's aviation industry development, indicating China had evolved from repairing pre-existing models to manufacturing its own.

Now, China's top-of-the-line J-20 stealth fighters have now entered combat service and made flypast in formations at the military parade on October 1.

China's J-20 is the fourth-generation medium- and long-range radar-evading fighter aircraft, and it was commissioned into air force combat service in 2018. It is also the third model of stealth fighter jet to enter active service in the world, after the United States' F-22 Raptor and F-35 Lightning II. 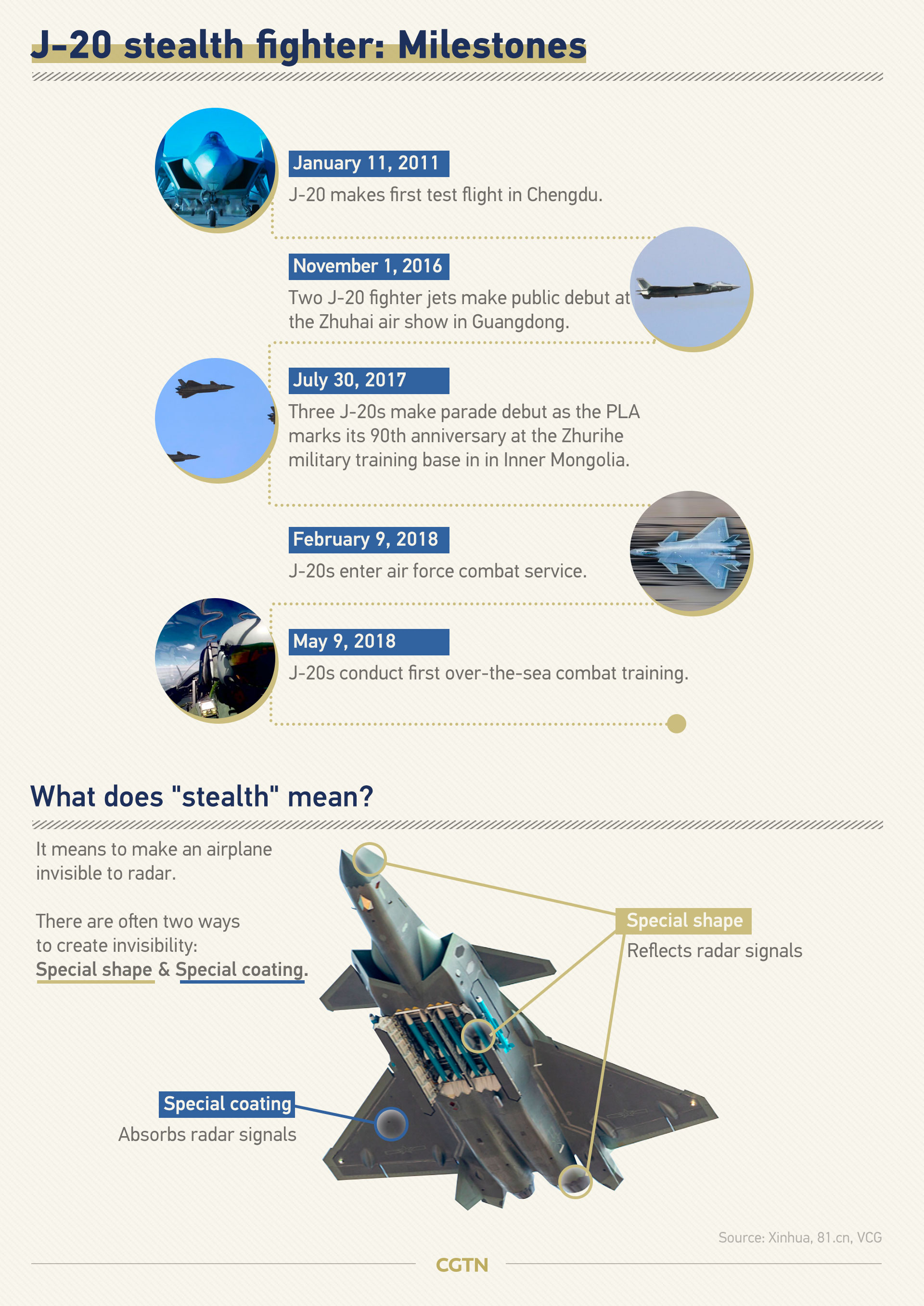 From subsonic speed to supersonic speed, from conventional aircraft to stealth fighters – the evolution of China's fighter jets shows how the PLA Air Force is shifting toward a strong, modern force.

China aims to establish a strategic air force by 2020, and make it a world-class force by mid-21st century.

Building a strategic force means that the fourth-generation equipment, which include China's top weapons such as the J-20 stealth fighter jet and the Y-20 strategic transport aircraft, will serve as the backbone of the Air Force's arsenal. The third generation of equipment, such as the J-10 and J-16 combat fighters, will work as the force's mainstay. Information-based systematic combat capabilities will also be enhanced.

The roadmap is in line with the strategic goals for the overall development of China's national defense and military, which aims to fully transform the PLA into a world-class force by mid-21st century.

But a stronger military does not mean aggression or expansion. A country as vast as China needs a strong military so as to safeguard its territorial integrity and national interests.

"The socialist system of China, the strategic decision to follow the path of peaceful development, peace-led foreign policy and the best of cultural traditions – holding peace and harmony as fundamentals – determine that China will pursue a national defense policy that is defensive in nature," as pointed out by China's latest national defense white paper published in July. 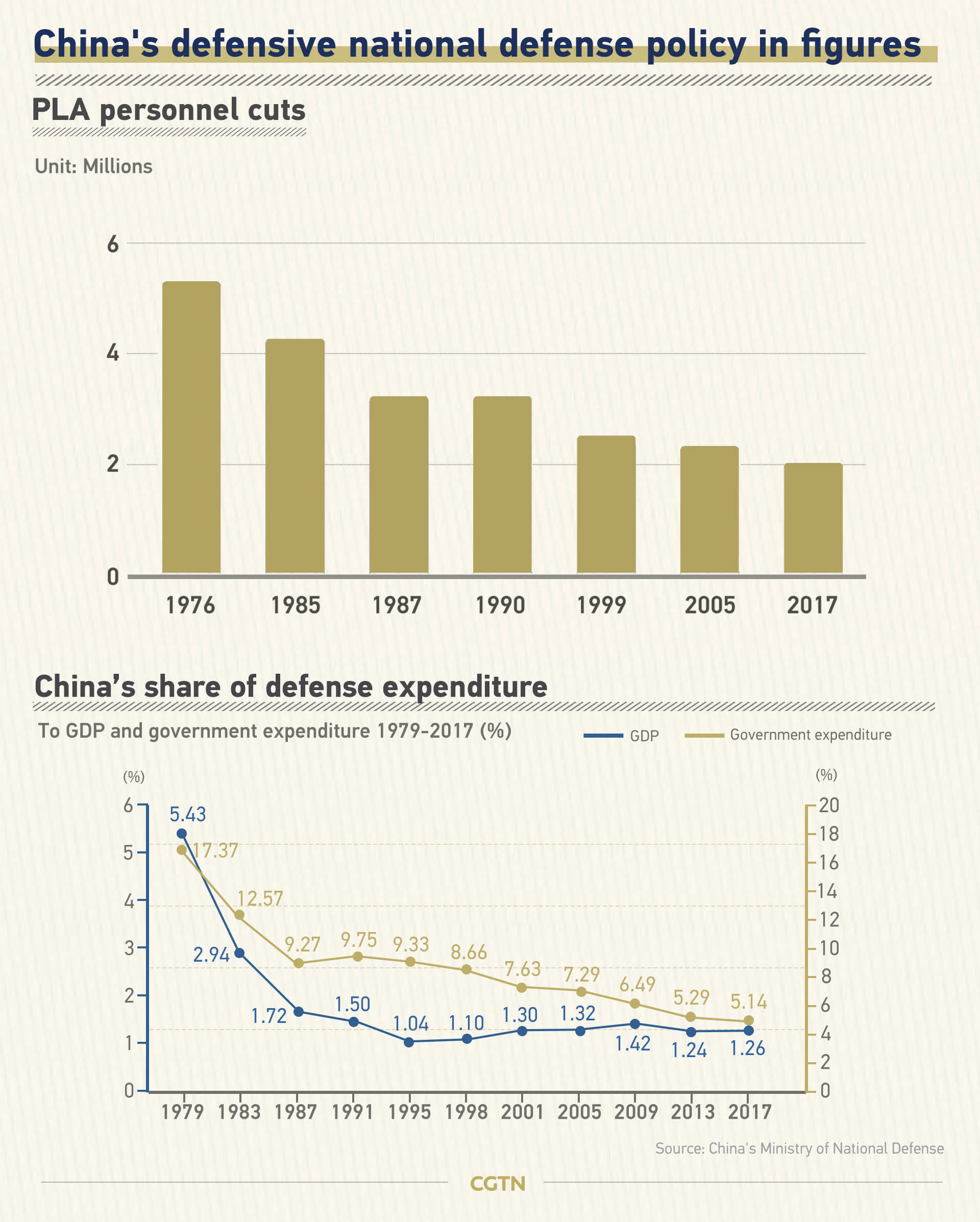 In a speech on October 1, Chinese President Xi Jinping also reiterated that the country will stay on the path of peaceful development and pursue a mutually beneficial strategy of opening up.

"We will continue to work with people from all countries to jointly build a community with shared future for humanity," he said.