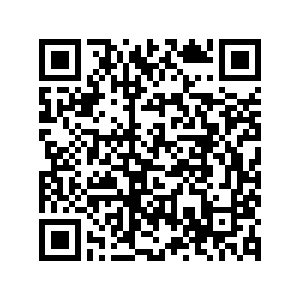 China is home to over a fourth of world's diabetes patients.

According to the International Diabetes Federation (IDF), there are around 425 million adults living with diabetes — and 114 million cases are in China. More than half of these cases remain undiagnosed. 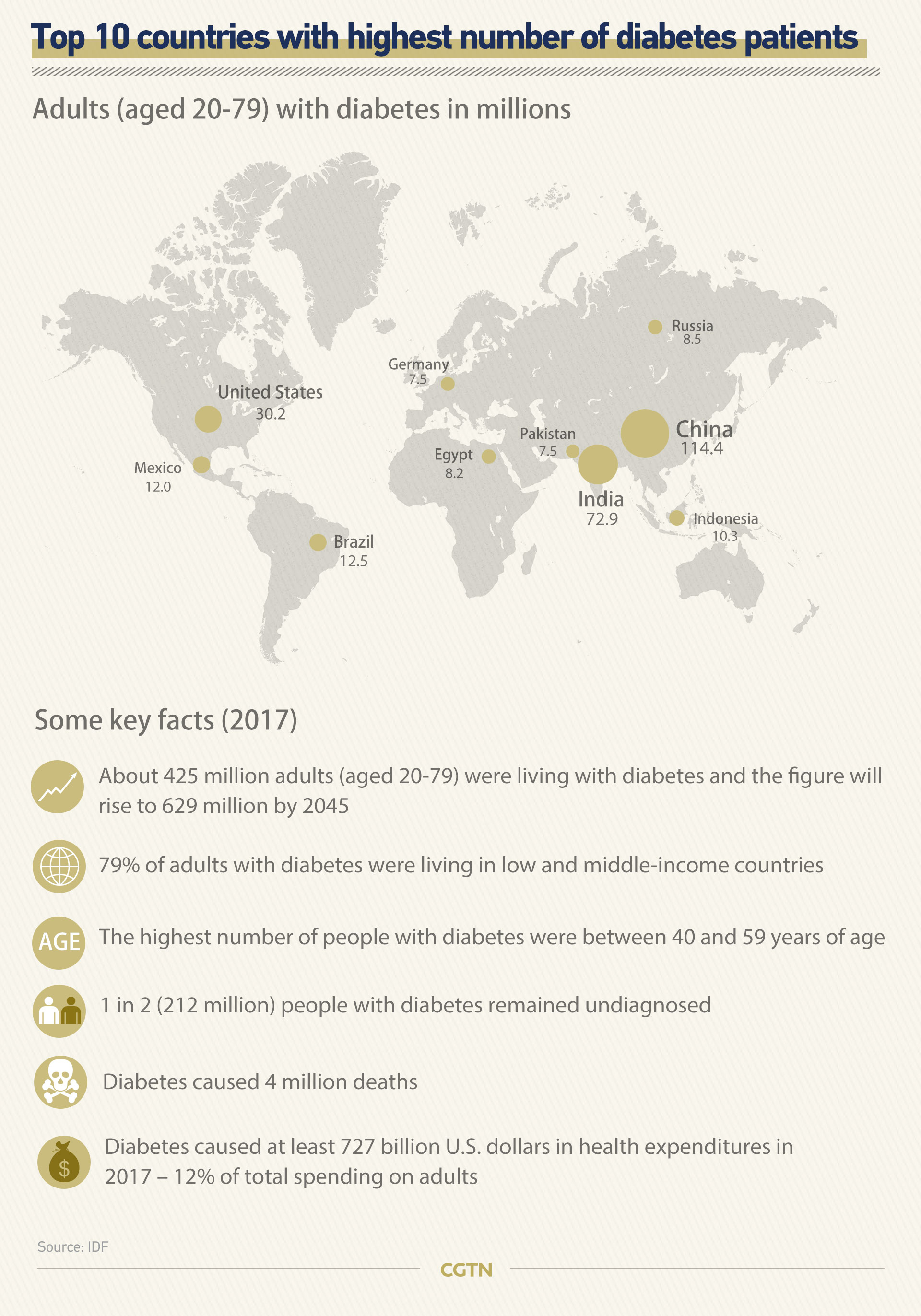 "Diabetes is on the rise globally, and rising faster in low income countries," World Health Organization (WHO) chief Tedros Adhanom Ghebreyesus said in a statement on Wednesday.

There are nearly three times more diabetics today than 35 years ago, according to the WHO. But the surge is much more dramatic in China.

In 1980, less than 1 percent of the population in China was thought to suffer from diabetes. Now more than one in ten Chinese adults have the disease, making China the country with the highest number of diabetics in the world. 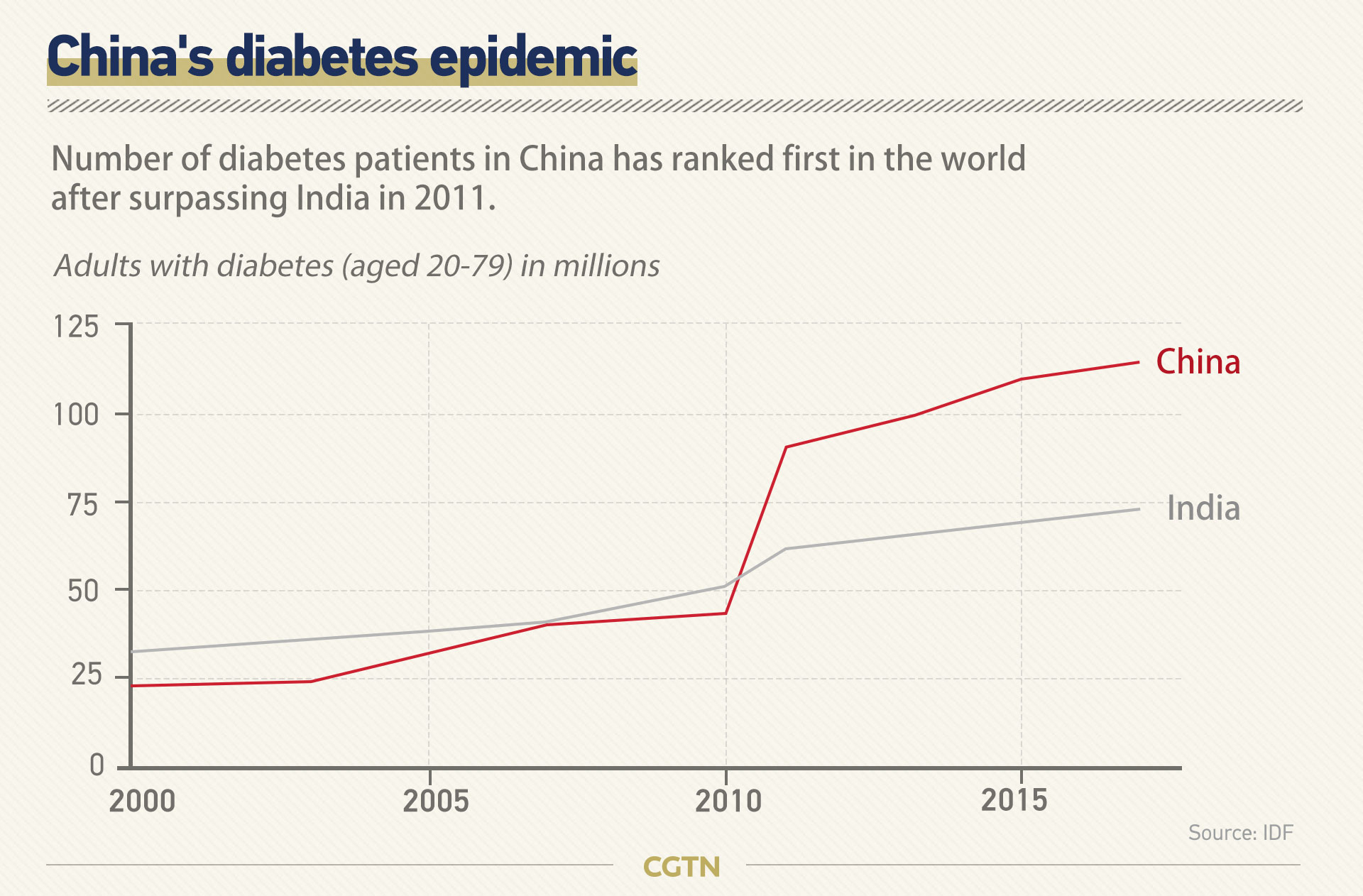 Across the globe, diabetes is the seventh leading cause of death and a major factor behind severe threats to health including heart attacks, stroke, kidney failure, blindness and lower limb amputations, according to the WHO.

Chronic diseases including diabetes and high blood pressure have become the main causes of death in China. In 2017, diabetes killed 843,000 people, accounting for 20 percent of the global figure, IDF data shows.

Over the past few decades, China's urbanization and rising living standards, leading to reduced physical activity and unhealthy diets — in combination with an already ageing population — are believed to be factors behind the soaring prevalence of diabetes.

There is currently no cure to the chronic disease, which requires life long treatment. Prevention is the key: simple lifestyle changes have been shown to be effective in preventing or delaying the onset of type 2 diabetes, the more common strand of the disease.

For treatment, WHO pointed out that some 65 million people with type 2 diabetes need insulin, but only half of them are able to access it, mainly due to high prices. All type 1 diabetics need insulin to survive.

The financial strain of living with diabetes

Experts estimate that each diabetes patient in China spends an average of 20,000 yuan (about 2,850 U.S. dollars) on treatment annually, according to Xinhua. 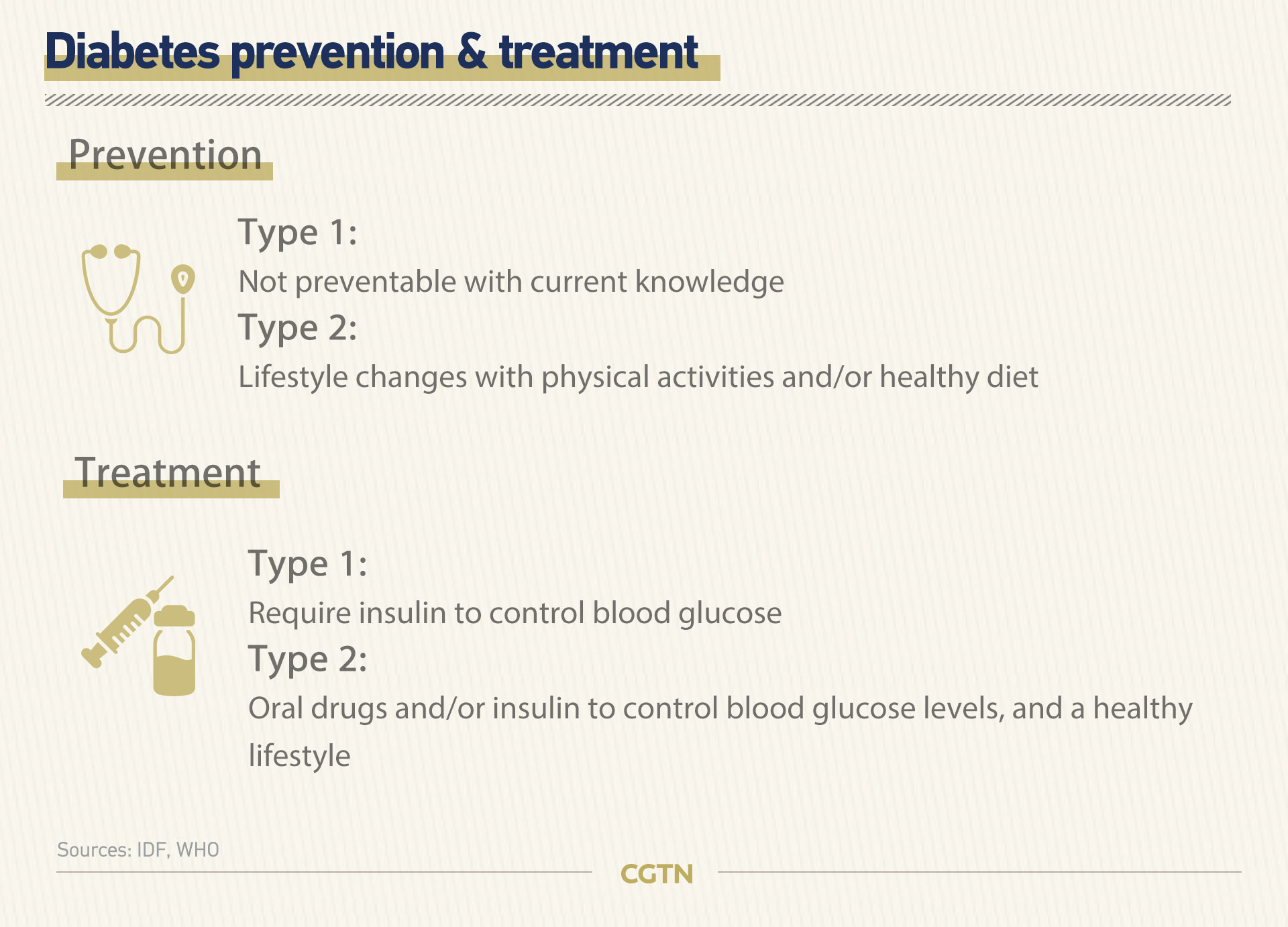 China has taken measures to lower the spending of diabetes and high blood pressure sufferers by reimbursing outpatients for over half of their spending on medicine, according to the National Health Commission (NHC) last month.

Over 300 million people under the country's basic medical insurance programs will benefit from the move, NHC said.

To further improve care and treatment standards of diabetes, an association of Metabolic Management Centers (MMC) along the Yangtze River Delta were established Wednesday, a day ahead of World Diabetes Day.

More hospitals in China are going to set up MMCs in their exploration of a new model of diabetes treatment, aiming to provide one stop diagnosis and treatment to help lower the occurrence rate of diabetes and its complications, according to Xinhua.

"The MMCs are expected to provide more convenient and efficient treatment of diabetes through a high degree of standardization," said Ning Guang, a diabetes specialist behind the initiative.

So far, a total of 343 hospitals in China have such centers.

(With inputs from AFP, Xinhua)