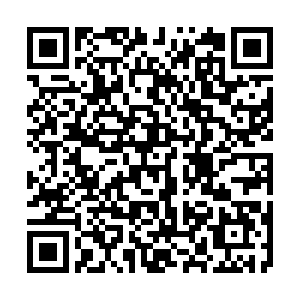 Chinese swimmer Sun Yang told a Court of Arbitration for Sport (CAS) tribunal that he is innocent and has nothing to hide during a public hearing on Friday.

The three-time Olympic champion, who was brought to the CAS by the World Anti-Doping Agency (WADA), asked the organization to comply with the rules it has set.

Sun requested a public hearing in July 2019 after the WADA appealed the International Swimming Federation's (FINA) previous decision in favor of the swimmer on his alleged anti-doping rule violations following an out-of-competition doping test.

Sun refused to complete a doping test conducted by the international testing company IDTM on September 4, 2018, saying the Doping Control Officer (DCO) and her assistants lacked sufficient authorization and credentials.

"I am innocent," said Sun, 27. "I believe the panel will make a fair decision and bring me the innocence."

Folders are pictured ahead of Chinese swimmer Sun Yang's public hearing of the Court of Arbitration for Sport (CAS) for the appeal filed in Montreux, Switzerland November 15, 2019. /VCG Photo

Folders are pictured ahead of Chinese swimmer Sun Yang's public hearing of the Court of Arbitration for Sport (CAS) for the appeal filed in Montreux, Switzerland November 15, 2019. /VCG Photo

"Determined to fight to the end"

"How can the spirit of fair play be achieved if organizations break their own rules? How can the Olympic dream be fulfilled if the basic rights of athletes are not guaranteed? In order to protect my rights as an athlete, I am determined to fight to the end,"  Sun said.

Sun said on the night of September 4, 2018, he asked doping officers from the international testing company IDTM to show their authorized certification, documents and valid accreditation, only to be refused by them.

"I was truly shocked by the conduct of the three IDTM officers. They completely disregarded their duties under the anti-doping regulations," he said.

Sun said he went through numerous doping tests and complied with the rules and cooperated every single time. However, he felt the doping officers were not trustworthy after one of them took pictures and videos of him during the test. 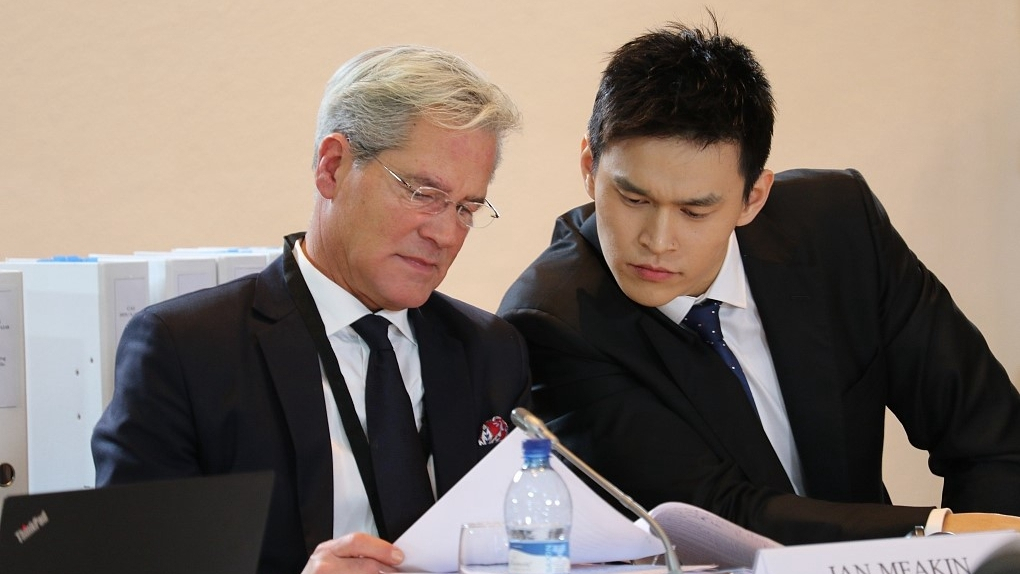 Sun Yang (R) and his lawyer Ian Meakin (C) read files at the public hearing in the Court of Arbitration for Sport (CAS) in Montreux, Switzerland, November 15, 2019. /VCG Photo

Sun Yang (R) and his lawyer Ian Meakin (C) read files at the public hearing in the Court of Arbitration for Sport (CAS) in Montreux, Switzerland, November 15, 2019. /VCG Photo

In the hearing, Sun explained that he stopped cooperating during the process because he found the Doping Control Assistant's behavior unprofessional.

"Why shouldn't I have the right to ask the officers to show their accreditation and authorized documents?"

Sun said he was still confused about why the IDTM officers disregard WADA's rules and treat athletes like this.

"It is important to fight against doping, but it is also important that the regulations are complied with by everyone, including the anti-doping organizations itself. Otherwise, everyone here behind me now can be the doping officers without training and officially authorized accreditation," he said.

"I believe the panel will make a fair decision and bring me the innocence," Sun concluded, finishing his statement at the end of the one-day public hearing.

CAS panel president Franco Frattini closed the one-day hearing and thanked the nine people, including Sun, who testified in only the second public hearing in CAS history. 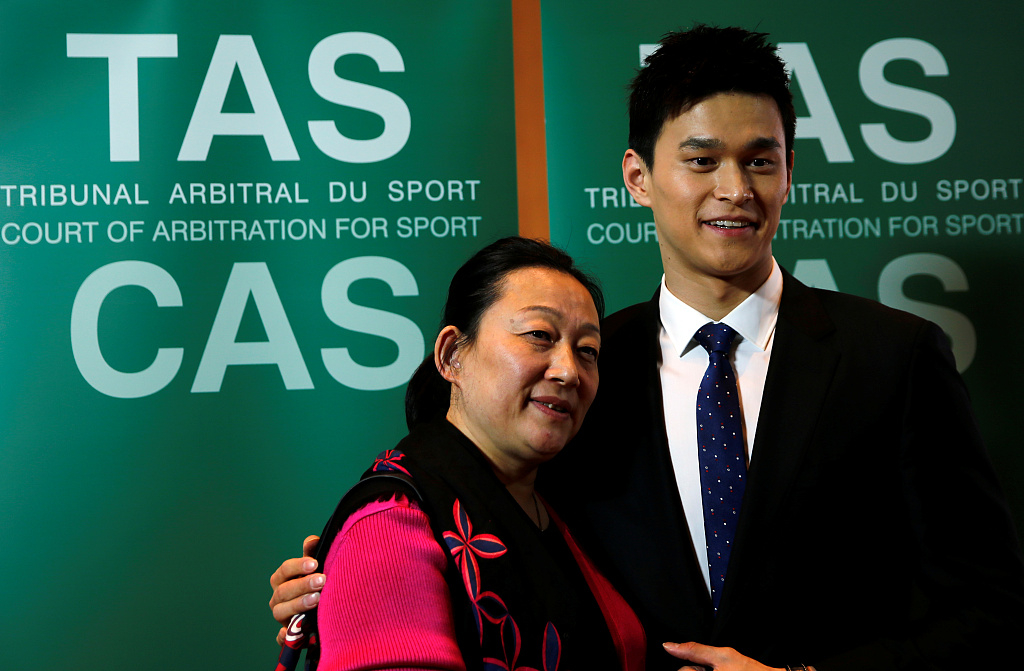 Sun Yang (R) poses with his mother after the public hearing. /VCG Photo

Sun Yang (R) poses with his mother after the public hearing. /VCG Photo

Athletes will not refuse tests once proper credentials are shown

A Chinese anti-doping expert has said that athletes will not refuse to take doping tests if the DCOs have proper credentials.

Han Zhaoqi, a doctor and professor from Zhejiang College of Sports, testified at Friday's (CAS) public hearing. He told the sports tribunal that athletes do not refuse taking doping tests once the DCOs are authorized and have proper credentials.

"I take anti-doping lectures every year at China Anti-Doping Agency (CHINADA). And I know that CHINADA issues DCO credentials to each and every DCO in China, and they also repeatedly stress that athletes should make sure they see the credential and confirm the DCOs' identification," he said. "What China does is to truly uphold WADA's World Anti-Doping Code."

Sun, the first Chinese man to win an Olympic swimming gold, said in his testimony that he was familiar with the CHINADA's doping control process.

"China's doping control has a really high standard. I take training in this area, and they (Chinese DCOs) will show me their credentials," said Sun during a hearing which was marred by poor translations.

The CAS panel will deliberate and prepare an arbitration award setting out its decision at a later date.