Yellow vest anniversary: A year of unrest in France
By Zhao Hong 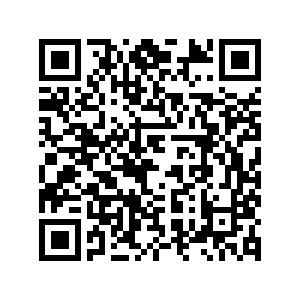 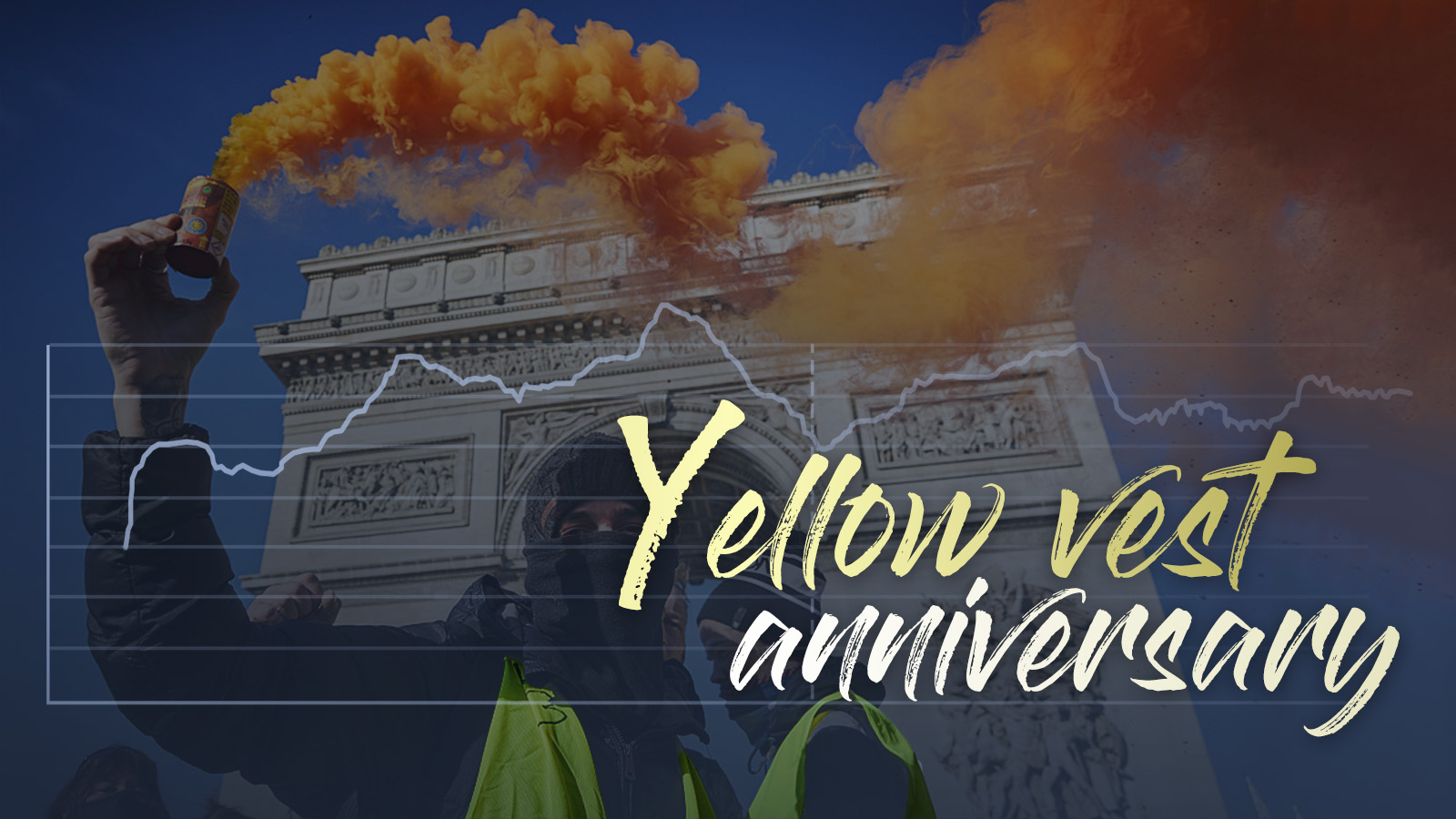 Exactly a year ago, on November 17, 2018, hundreds of thousands of people took to the streets at more than 2,000 locations across France, wearing yellow vests, protesting against an increased fuel tax. They blockaded highways and petrol stations, occupied roundabouts and toll booths, and marched through town centers.

The scenes unfolded into one of the most significant revolts in the country's modern history.

The numbers of protesters have starkly dwindled since the early summer and the movement has largely dispersed. Still, a year later, the effects of the movement have extended, leaving the government with a shifted focus on social inequality.

An Elabe poll this week found 55 percent of French people support the yellow vest movement even after signs of fatigue in the past months. At the start of the movement, nearly three-quarters of respondents backed the yellow vests. 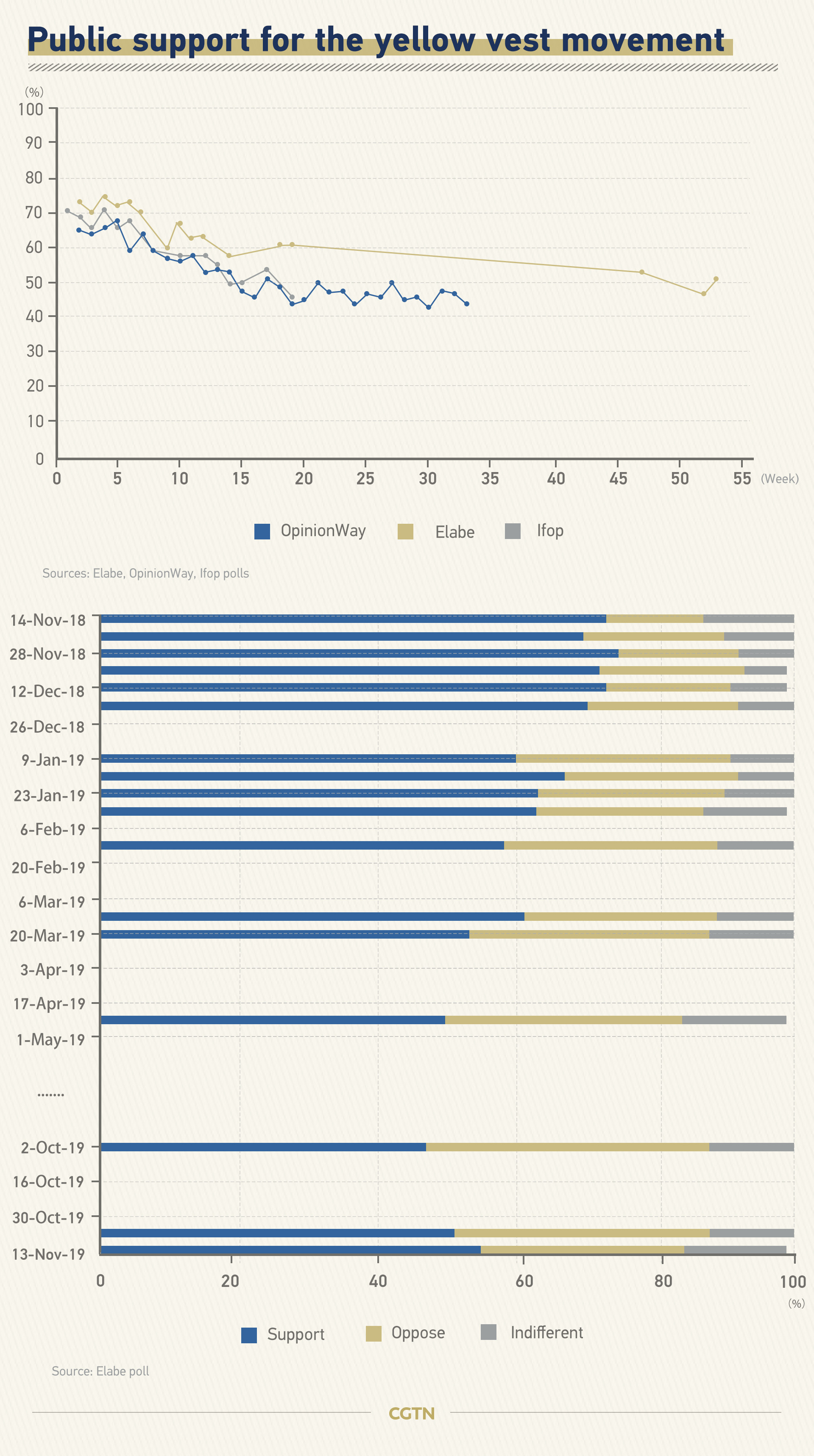 What is yellow vest movement?

The yellow vest (gilets jaune in French) movement was named after the high-visibility jackets the protesters wear. Every car in France must carry a reflective vest for roadside emergencies. Easily accessible and identifiable, the yellow fluorescent vests have symbolized the movement.

The demonstrations began in opposition to a proposed hike in carbon tax that was perceived to disproportionately burden the country's working class, but they quickly evolved into a broader stance against President Emmanuel Macron's economic policies.

The fuel tax hike was implemented at a time when the prices of petrol and diesel in France had already risen over the past 12 months, let alone that the government had imposed at the start of 2018 an increase of 7.6 cents per liter on diesel and 3.9 cents on petrol. The decision of a further increase of 6.5 cents on diesel and 2.9 cents on petrol starting from January 1, 2019 was seen as the final straw. 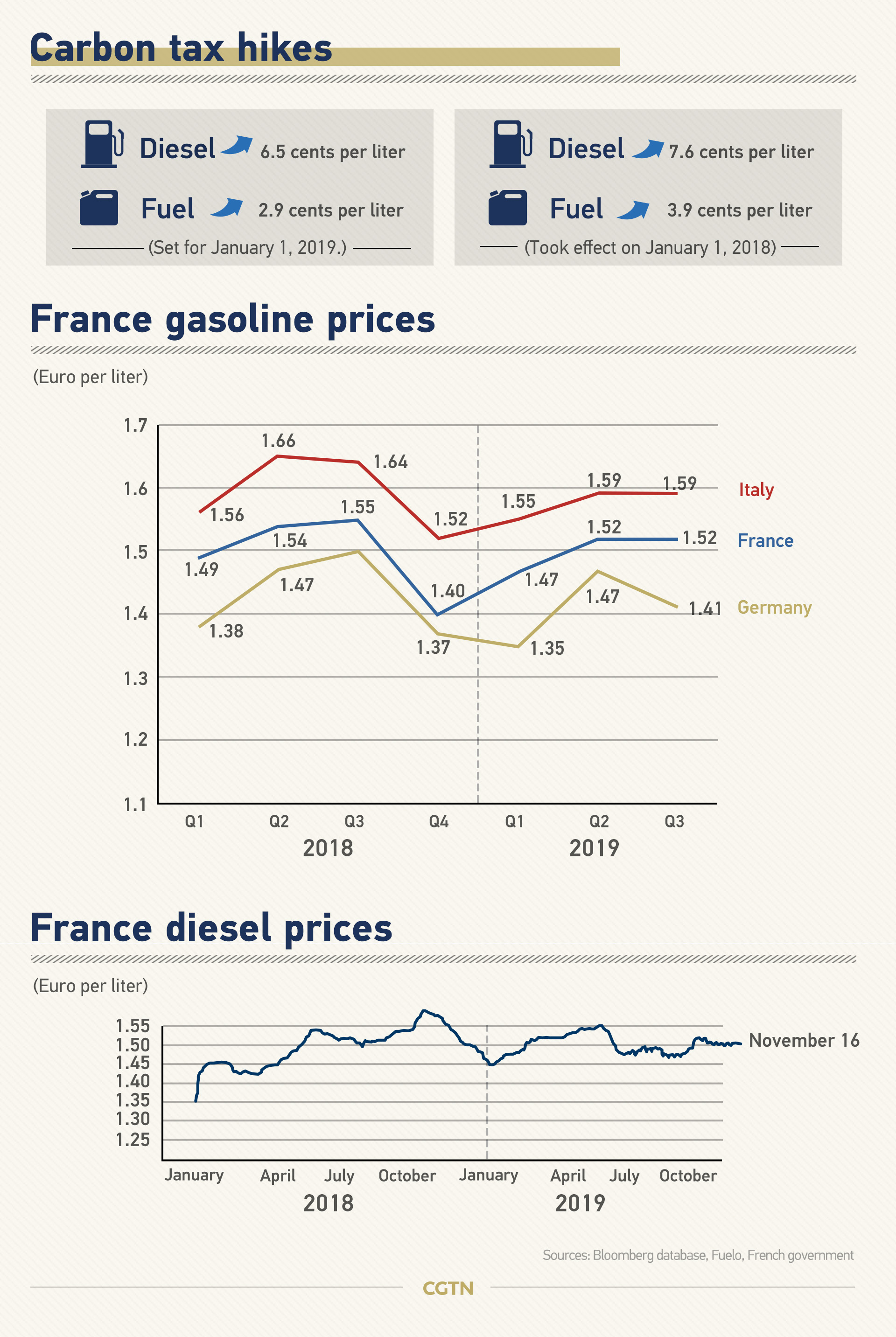 The role of social media

The movement never had any clear or strong leadership structure, with no official organization, identified leader or political affiliation. A faction that ran in the European Parliament elections this year failed to muster even a percentage point of the vote.

It all began with a single online petition to lower fuel taxes launched in May 2018. The anti-fuel tax petition resonated with middle- and working-class motorists of France and went viral on Facebook.

A Facebook event was created calling for people to block roads on November 17. Also around this period, a video went viral which proposed the use of high-visible jackets during the protests.

The yellow vest has since then become the symbol of this movement.

This only gives a glimpse of what had happened online. All kinds of viral videos, Facebook groups have been springing up ever since.

The yellow vest crisis forced Macron to make policy concessions and delay the next big wave of reforms. The fuel tax that had incited so much anger was rolled back.

Since the protests, Macron's government has announced plans to increase wages for some of the poorest workers and cut taxes for most pensioners.

But persistent protesters said the 41-year-old president needed more than 15 billion euros worth of tax cuts and other fiscal incentives to quell the uprising.

Much of the protesters' anger was aimed at Macron, calling for his resignation.

The French president initiated a grand debate early this year, to help authorities determine which policies citizens want the government to focus on, and apologized, slightly saving his approval ratings. 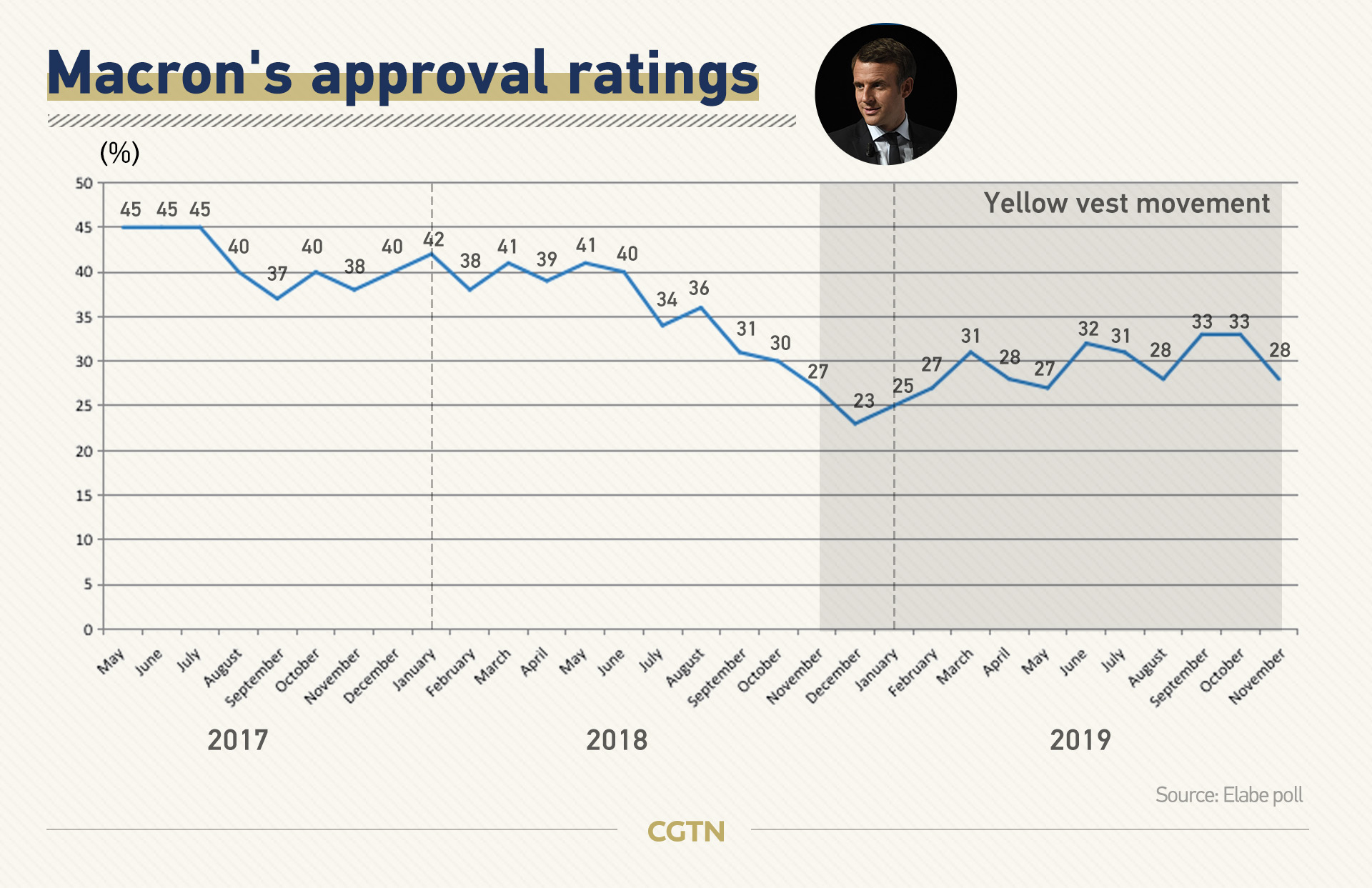 An Elabe poll last week showed Macron's approval rating fell to the bottom in December but was back to above 30 percent after a while.

Macron had his reasons for proposing the fuel tax hike. The French government is committed to meeting its international obligations to reduce CO2 emissions. The fuel-price hike was intended to discourage the use of diesel and petrol cars and the generated revenue was expected to finance renewable energy projects.

But the movement sent a clear message that Macron needed to change his actual political strategies, which the demonstrators accused of being out-of-touch.

The movement stems from frustrations over the high unemployment rate and stagnated economy.

France's stubbornly high unemployment rate has remained at above nine percent over the past decade, and the economic growth in France has been relatively anemic. 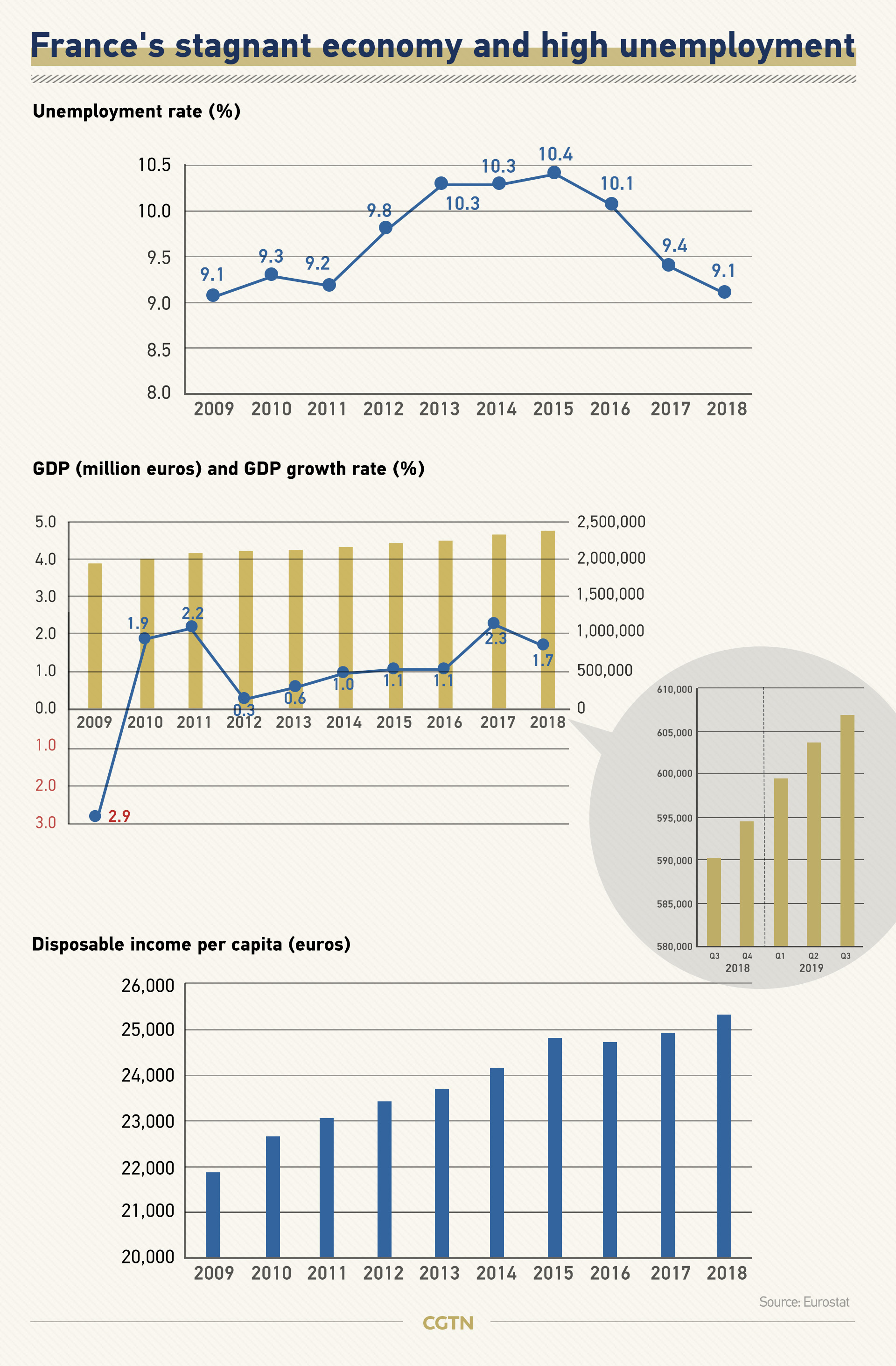 The president came to power in 2017 vowing to overhaul the French economy.

Now, midway through Macron's presidency, there are signs his reforms are having an impact: job creation is strong, companies are hiring more workers on long-term contracts and unemployment is trending downwards.

Why the movement attracts world attention?

These spectacles were at times devolved into violence, with rowdy protesters smashing shop windows, ransacking national monuments, such as the Arc de Triomphe, ravaging Paris and other major cities in the country. In their crowd control efforts, French police were criticized for their heavy-handed tactics.

Similar protest movements have spread across Europe in countries including Belgium, Germany, Sweden, the Netherlands, and the UK.

Macron faces the dilemma of figuring out how to maintain a carbon plan that meets the commitments made in the Paris Climate Agreement while surviving politically.

Leaders and the public around the world are looking at France, observing how it handles the gap between the reality and the future.